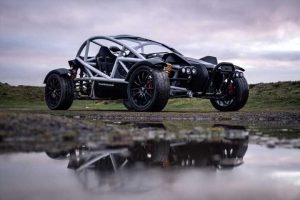 When Ariel says it wants to do 'something a bit bonkers', you know you're in for something special

The Ariel Nomad R doesn't have the rubber or the wheel travel to go off-road. You'd quickly get beached on a small mound of earth, or the Yokohama Advan A052 track day tyres would spin hopelessly on the wet grass or mud. Or you'd simply rattle yourself senseless as you skipped and crashed along the uneven terrain. The standard Nomad with its knobbly tyres, vast suspension travel and squishy rally-raid dampers is a born off-roader, but not this new model.

Instead, the R is a Nomad for the road and racetrack. That probably undermines the entire point of the Nomad, not least because in the Atom, Ariel already builds one of the most thrilling road and track cars money can buy. So, what's the need for this one? In the words of Ariel's Tom Siebert, "We just wanted to do something a bit bonkers".

Two things. First, that's quite a statement from a company that made its name building two-seat sports cars that have no bodywork – let alone a roof – and which are not much more than a tangle of scaffolding poles welded together with a ferociously powerful engine hung off the back. Second, only in the entirely unhinged world of Ariel is that reason enough to put a new model into production. You can't really argue, can you?

With only five set to be built, 'production' might not be the right word. These Nomad Rs will be sold to friends of Ariel, to existing customers who simply have to have the full set. You sense the marketing strategy for this car involved little more than Tom sending WhatsApp messages to a handful of mates, saying something along the lines of, 'This thing is barmy, I'll put your name down for one! [exploding head emoji]'.

So, what exactly is it? The existing Nomad chassis, taller than that of the Atom thanks to its overhead bars that don't quite qualify as a roof, is unchanged. But you get road-biased suspension (the one you see here is fitted with optional Ohlins dampers) plus semi-slick tyres and a completely different powertrain, one better suited to screaming away from corners than hammering through mud and gravel.

Whereas the most basic Nomad uses a 2.4-litre naturally-aspirated Honda engine rated at around 240hp and the higher-spec model a supercharged version of that same unit with close to 300hp, the Nomad R uses a smaller 2.0-litre motor, still borrowed from Honda and supercharged to lift power to 340hp. Gone too is the Nomad's six-speed manual gearbox, in its place a six-speed Sadev sequential with an LSD and a conventional clutch pedal, which you use only for getting the car rolling and bringing it to a halt. There's a small carbon fibre paddle behind the steering wheel that you flick and push away using your right hand to shift up and down the gears.

As on a Nomad, you also get a really well integrated windscreen – heated and with wipers and a wash function – which means you don't necessarily have to wear a helmet to drive the car. Although given that we chose a mid-December day when temperatures were forecast to rise no higher than 2 degrees Celsius to test the Nomad R, I opted to wear my Arai. Full thermal underwear, too.

Think tarmac rally car. To that end, the gearing is so short the Nomad R tops out at just 121mph. Ariel reckons its buyers no longer care about top speed. They get much more of a kick out of the kind of punchy acceleration you only get from stacking the ratios very tightly together. Gearshifts flash by in one-twentieth of a second and there's an auto blip on the way down. You needn't lift off the throttle pedal when changing up. Weighing less than 700kg, the Nomad R is fearsomely accelerative – Ariel says it'll crack 60mph inside three seconds.

Whether you drop yourself in from above or clamber in from the side, you find yourself cupped in the moulded plastic seat with the wheel close and your legs outstretched. There is no real weather protection aside from the windscreen, although two clear plastic panels run from the midpoint of the chassis to the front, keeping the worst of the wind and rain away from your trousers. A four-point harness keeps you pinned against that hard plastic moulding, which only becomes unyielding after several hours.

The clutch pedal is unexpectedly light and the unassisted steering easy once you're on the move. The electronically-controlled pneumatic shifter doesn't like half-hearted attempted gear changes – only if you're hard on the throttle will it permit an upshift, at which point you hear a hiss-thunk from over your shoulder and feel the new ratio bang in.

On a bitterly cold day, the roads covered in a dew that won't lift before the next one comes down, plus tyres that stay hard and frigid, the complete lack of driver aids focuses the mind. There's no ABS, let alone anything that might prevent you from spinning backwards through a hedgerow. And that might be a problem were this not an intensely communicative car. You pick up subtle changes in the pressure met by the ball of your foot against the brake pedal, feel how much traction there is through the throttle and sense the grip across the front axle through the steering wheel as it wriggles and writhes in your fingers, all four limbs flooded with information. Even so, in conditions like those we had earlier this month, you drive the Nomad R along a winding moorland road like a soft-bellied white-collar criminal edging through the canteen at HMP Belmarsh – nervous and uptight, hyper-alert to the threat from all corners.

The linear, predictable way in which the supercharged engine delivers its power and torque comes as a blessing. The clumsy torque dump you'd get from a turbo engine would make the Nomad R a real handful, the rear tyres spinning hopelessly at the slightest provocation. As it is, you know precisely how much throttle you can chuck at the rear axle, trusting that should it break loose, it'll do so progressively. Superchargers and light cars are a heavenly combination, for there's real tractability and a muscularity through the mid-range, but still the kind of zingy top end that's worth chasing gear after gear.

The ratios are so tightly stacked you pull on that little paddle like it's spitting out pound coins. The car surges forwards, soundtrack rising to a high-pitched, screaming crescendo that's almost unbearable without the hard shell and soft padding of a helmet between your eardrums and the wailing supercharger. On the few drier patches of asphalt available, I could lean on the Nomad R a little harder, feeling it roll in corners, dive under braking and pitch when accelerating. It's a finely-balanced machine with limits that you dance around, rather than back away from. It excites, thrills and frightens in equal measure.

There is an edginess to the ride on bumpy sections of road that neither the regular Nomad nor the Atom exhibit. It's evidently set-up for very smooth tarmac, be it public highway or racetrack, although the adjustable dampers would give you some freedom to tweak and hone the ride to your tastes. The fact is the lower, lighter Atom is the better road car and a basic Nomad the more compelling plaything, given its off-road credentials. Instead, think of it this way: what kind of Ariel collection would be complete without the most bonkers car it builds right now?