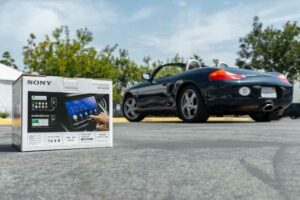 An entire industry has emerged around smartphone mounts for your car. Magnets clipped to an air conditioning vent, suction cups on the windshield, cheap plastic mounts meant to fit in the cupholder; we’ve seen it all. But if you’ve driven a new car in the past five years, you know there’s a more elegant solution.

With the near-universal adoption of smartphone-mirroring software in the forms of Apple CarPlay and Android Auto, we can now use familiar, up-to-date media and navigation apps like Spotify and Google Maps in-car on a large, integrated touch display. But what if your ride was built before the CarPlay era? Worry not. Many older cars use standardized head unit sizing that make it easy to source and install an aftermarket system. Although head units with Apple CarPlay and Android Auto capability were prohibitively pricey for most folks just a few years ago, they’re now less expensive than you might think.

So what’s it like to add an aftermarket head unit with Apple CarPlay or Android Auto to an older car? We had Sony’s XAV-AX7000 receiver installed in our 1998 Porsche Boxster to explore the pros and cons if you’re ready for an infotainment upgrade from a simple vent clip.

Our review unit sports a 7.0-inch touch display with sleek flush bezels on the top and side and a row of illuminated buttons along the bottom edge. Coincidentally, the screen measures the same size as the factory infotainment display on a 2021 Porsche 718 Boxster, a car that only added standard Apple CarPlay this year and still lacks Android Auto support.

The display is coated with an anti-glare film that successfully minimizes reflections, and it’s a capacitive touchscreen like that of an iPhone rather than the old-school resistive touch displays that rely on mechanical pressure applied to the surface. Controlling the system via touches and swipes is effortless, but because the Porsche wasn’t designed for a touchscreen interface, it lacks a spot under the display to anchor your thumb for more accurate touch inputs.

Bluetooth wireless audio streaming is included, but the smartphone mirroring functionality requires a wired connection. (The system also includes a backup camera input, plus a second USB port if you want to load up a flash drive with high-quality audio or video files.) Although some of the newest vehicles offer wireless Apple CarPlay and Android Auto, that technology isn’t always reliable and is best paired with a wireless charging pad. Even with a wired connection in our testing, plugging in an iPhone doesn’t always immediately bring up the CarPlay interface; sometimes it takes a couple of tries, but we’ve run into that problem with new OEM systems, too.

Once you successfully connect and open Apple CarPlay, though, the experience is identical to that in a new vehicle. The apps and icons are familiar and easy to use, and the display’s position high in the center console means our eyes were never away from the road for long. At its brightest setting, the AX7000’s display was just bright enough to contend with California sun streaming into the open-top Boxster, but in a perfect world, we’d have it 25 percent brighter.

The main difference between the AX7000 and Sony’s less pricey alternatives is the power. Compared to other Sony systems and most aftermarket head units, the AX7000’s 45-watt RMS (continuous)/100-watt peak power delivered across four channels is twice as powerful. Think of wattage in this sense like water pressure; even at lower volumes, your speakers will sound better with more power.

This is crucial, especially in a noisy open-top convertible, and the AX7000 succeeds in providing superior crisp audio through the Boxster’s stock speakers. We appreciate the 10-band equalizer for adjusting the aural experience, and there’s an Extra Bass mode that helps add depth in a vehicle without a subwoofer. That said, the woofers in the stock door speakers sound tired over 20 years past their build date, and we’re certain the Sony unit will shine even brighter when we install new ones.

Our only real negative experience was with the installation process. We went to a local shop near our office that was listed by Sony’s recommended retailer, Crutchfield. The folks at the shop charged a $50 deposit to lock in the appointment as part of a $250 installation cost.

We dropped off the car that morning and got a call around four hours later saying the installation was complete. Sinking into the driver’s seat to take a look at the new upgrade, we couldn’t help being distracted by a couple of problems. First off, the shop couldn’t mount the display flush with the existing center console panel; it sticks out about half an inch. The screen also angles slightly down instead of up and toward the driver like most factory-installed infotainment displays.

Second, we noticed some damage to the Boxster’s interior trim. There are what appear to be pry marks on either side of the display that could be from the installers removing the old unit, and although we dig the factory-look placement of the microphone on the left of the display, the plastic trim is noticeably scratched.

We mentioned the issues to the shop attendant who immediately cut the installation cost in half, but we’d still rather have paid full price for a clean install. Our experience was of course not necessarily indicative of what you may see at your local installer, but make sure to do your research and hire a trusted shop.

Verdict: Is a CarPlay Head Unit Worth the Cost?

Despite issues with the installation process, the Sony AX7000 is no doubt a meaningful upgrade to our old Porsche Boxster. The display is large, clear, and responsive, and it provides a safer, more elegant way to control our media and navigation apps in the car.

The total cost came to $725, which includes the unit’s $600 price and the discounted $125 installation. That’s pricey, but if you’re just looking for Apple CarPlay and Android Auto, there are cheaper solutions. A less powerful unit with the same display called the AX5500 retails for about $450, and Crutchfield has Apple CarPlay units from other manufacturers as low as $229.99. Sony also sells a head unit with a volume knob (nice!) and a smaller, 6.2-inch touchscreen. That said, we appreciate the AX7000’s large, readable display and its improvement in power and sound quality. Adding this Sony system makes an immeasurable difference in usability and modernity for this older vehicle.

For this review, Sony sent us the unit free of charge. Our only out-of-pocket expense was for installation.