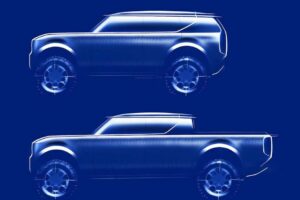 Volkswagen has announced plans to launch an all-electric pick-up truck alongside a “rugged” SUV for the booming United States pick-up market. The German carmaker also confirmed that the new vehicles will be designed, engineered and manufactured in the U.S under the revived Scout brand, which will focus on building electric off-road vehicles and pick-up trucks.

Production of Scout’s electric off-roaders is scheduled to start in 2026, while we will get our first glimpse of the new cars next year. The new battery-powered Scout vehicles will be built upon an entirely new platform rather than using Volkswagen’s existing MEB electric vehicle architecture from models like the ID.4.

See also: Pricing Has Been Revealed For The New Ineos Grenadier, And Pricey It Is

Herbert Diess, CEO of Volkswagen Group stated: “Electrification provides a historic opportunity to now enter the highly attractive pick-up and R-SUV segment as a Group, underscoring our ambition to become a relevant player in the U.S. market.”

Initially, Volkswagen will sell vehicles under the Scout brand exclusively in the US. However, it’s possible that we could be seeing more of the Scout name outside of the US in the coming years. Volkswagen has struggled for years to gain market share in the US, and gradual gains were dealt a major blow by the dieselgate scandal, which was a PR disaster for the brand. Using the Scout name will be key to VW’s aim to double its electric vehicle market share in the US in the next few years.

In other Volkswagen Group related news, Audi And Porsche Have Moved A Step Closer To Joining F1