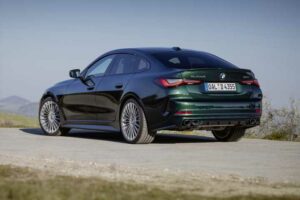 Not many cars could talk us back into a diesel engine. The new D4 S GC is one of them…

Diesel sales might have been assigned to industry’s back burner in the last few years, but that hasn’t meant an end to great (relatively speaking) diesel cars. Launched today, the Alpina D4 S Gran Coupe is a case in point. The petrol version of the luxury four-door model was introduced back in March with 495hp and 538lb ft of torque. Characteristically, the oil burner gets less outright power at 355hp, but supplies its owner with exactly the same amount of torque from 1,750rpm – and does it while returning 40.9mpg on a combined cycle.

Anyone who has sampled the current D3 S will be familiar with the mild hybrid 3.0-litre straight-six motor, a breathed-on version of BMW’s top spec diesel that features an Alpina cooling system alongside a larger intercooler. Mated to the rear-biased xDrive all-wheel-drive system and the wonderfully slippery ZF eight-speed auto, its maker says the Gran Coupe will knock off 0-62mph in 4.8 seconds and is capable of 168mph. Plenty quick enough, in other words.

But that’s not why you buy an Alpina. Or at least it isn’t the whole reason. Far better to fixate on what the tuner has done with the chassis. “As a true Gran Turismo, the BMW Alpina D4 S Gran Coupé combines emotional driving dynamics with comfortable touring,” the bumf says – and for once the marketing waffle rings true. The D3 S was one of the best real-world cars we drove last year, and there’s no reason to think that much the same chassis – featuring a reworked front axle and bespoke spring and damper configuration – wouldn’t achieve the same to-die-for driving experience in the GC.

Of course, on top of that you’ll get the patented Alpina look. Most notable (as ever) are the 20-spoke forged alloys, which the manufacturer says weigh only 12kg a corner. Around them (as ever) you get the ALP-coded Pirelli P Zero tyres that are custom-made for Alpina and contribute to the note-perfect ride quality. Elsewhere you get the trademark chin spoiler and an ‘unobtrusive’ one at the back, too, alongside the four oval tailpipes that mark you out as a discerning buyer. You can basically have the car in any BMW colour, though absolutely you should it in the green or blue which are reserved for Alpina alone.

Inside it is essentially a very high spec GC, with all the kit you’d expect – plus ‘elegant details’ like the familiar production plaque with an individual build number on it or the steering wheel hand-stitched in Lavalina leather. In fact, if you’re so inclined, you can have the whole cabin upgraded to Lavalina courtesy of Alpina’s in-house leather workshop. Naturally that will add to the model’s 79,700 euro starting price (around £68,500), but you’ll probably appreciate it in the long run.

And considering the D4 S Gran Coupe for the long run is a good way to go. As we know, its maker is due to be absorbed into the BMW mothership from 2026, and while the manufacturer is quite capable of producing special versions of its own products, by definition they will not be the Alpina-branded cars we’ve come to love. So there are not only a finite number of diesel-engined models left to come, there is also a limited amount of Buchloe-produced stuff left to get excited about. The D4 S Gran Coupe is among them, so if you’ve ever been tempted by the company’s special sauce when it comes to oil burners, now is the time to get serious about it. Deliveries commence in September.