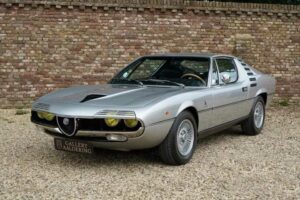 Even if you could, would you buy a Lamborghini Luton? How about a Bentley Basingstoke, or a Ferrari Frinton? Naming cars after places can work, but only if the place names are cool. Like Montreal. You might associate this beautiful Canadian city with the jazz festivals which started there in 1980. For Alfa Romeo, however, Montreal was a cool place long before that. In 1967 to be precise, when they delivered two knockout concept cars to the World’s Fair being held there.

At a time when Zapata-‘tached blokes in permanently-creased Crimplene trousers were watching The Persuaders on the telly while fantasising about big-motored two-seater coupes, the Montreal made quite an impact. Nine months before the World’s Fair Bertone’s poster-boy stylist Marcello Gandini had been given a 1.6 Giulia GT and an invitation to perhaps reconfigure it using the design values of his show-stopping Miura and Countach to create a front-engined car that would also stop the show by representing ‘the highest aspiration of Man in terms of cars’.

No pressure, then. All credit to Gandini therefore for coming up with the Montreal’s wonderfully distinctive side-slotted, slat-hooded headlight look. A three-way cross between sports car, grand tourer and atelier artwork, the Montreal was lauded by many as the best looking Alfa from the second half of the 20th century. Weighing a claimed 1,312kg and available in some brilliantly period colours like apple green and salmon pink, some of which suited the body shape better than others, it was a scaled-down dream car at an affordable (sort of) price. In the UK it started off at just over £5,000, making it more expensive than the Jaguar E-Type or the Porsche 911.

Unfortunately it was one of those cars that looked better than it went. It could hardly do otherwise to be fair as it did look amazing, dummy NACA bonnet duct notwithstanding. Alfa tried to endow it with a drivetrain worthy of its body panels, and they made a decent fist of that by adapting a quad-cam dry-sump 2.0 V8 from their Autodelta racing stable. It was a perfect engine for the job as long as you were prepared to rev it out in every gear and ideally rebuild it every fortnight.

To boost everyday practicality and relaxing cruisability Alfa bored and stroked the engine it to 2.6 litres (huge for an Italian car of that age) and changed it from flat-plane to regular woofly cross-plane operation before attaching it to a bought-in ZF 5-speed dogleg gearbox. Five-cog boxes were still very much in the minority back then. With fuel injection the V8 produced just under 200hp at 6,500rpm and 173lb ft at 4,750rpm. 0-60mph was supposed to come up in 7.6sec, the max speed was 138mph, and generally speaking the mechanical side of it was very pleasant indeed.

The Montreal’s problems were in its chassis, a modded 1750 GTV item which was already showing its age before it was pressed into reluctant service for the new halo product. The steering was unassisted which was fine as long as you weren’t doing too much low-speed work, but despite the addition of ventilated disc brakes, beefier rubber on Campagnolo 14in alloys and wider tracks front and rear – and despite it being rear-wheel drive – the Montreal turned out to be quite dodgy at speed. It was very nice for touring and moderately enthusiastic use, but not long after the car’s release to the public Alfa hurriedly issued plastic chin spoilers to its dealerships for retro-fitting in an attempt to reduce grip-reducing aero lift.

The Montreal production line ran for six years from 1971 to 1977. Alfa built fewer than 4,000 of them in all that time as they couldn’t be bothered trying to get it through the US smog laws. Even so they might have made a lot more if the global oil crisis of 1973 hadn’t throttled the performance car sector a year after the Montreal’s biggest production year.

Obviously all Montreals still extant will have been restored in some shape or form at some stage in their lives but the cost of doing that isn’t as clearly reflected in the prices as you might think. Our Spotted, a later car from 1975, lives in Holland and is priced at 78,500 euro, or a little over £66k at the time of writing. Along with other examples of the breed it’s arguably underappreciated and undervalued at that.

Those ‘eyelash’ slats rotate down and under the headlights by the way. Surely it’s worth the asking price for that alone, plus the fact that the only mention of the name ‘Montreal’ anywhere in the car is on the voluminous ashtray ahead of the gear lever. You can’t get any more Seventies than that.