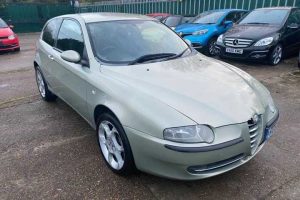 The 147 is a rare sight at Shed money. Perhaps there's a good reason for that…

How many Alfa Romeo 147s do you think have appeared in Shed of the Week over the last decade or so? Quite a few, right? After all, despite it winning the European Car of the Year award, which is usually a death sentence for any car, Alfa sold nearly 600,000 of them.

Two. Yep, two. There was a JTDM diesel a good few years back, and then no more until last summer when a black(ish) 2.0 Twin Spark popped up at £400, so let's cheer the 147's hat trick with this 2.0 Twin Spark. It has the same sort of mileage as, and a similar MOT history to, last year's car, but it's a different colour – minty green – and the price is a fair bit higher at £995. Both sheds are/were Lussos, so you get climate control, cruise, and of course that uniquely smart Alfa seating in leather.

Why is the 147 so rarely seen on our sub-£1,500 shelf? Could it be down to the older/rattier ones going straight from street to scrappage, with no money ever being put into them to get them through an MOT? If you had a £1,000 147 that needed £500 or so spending on it to keep it on the road, would you? What about the other well-trodden theory, that owners hang on to old cars (not just Alfas) because their emotional value is higher than their actual pound value?

Or how about this controversial third theory, that everyday four-cylinder Alfas are currently undervalued?

When you've finished laughing at that thought, consider the £10k-plus prices being asked for GTA V6 147s. Given that these five-figure V6s often outnumber far humbler sub-£1,000 147s on other well-known sites (try a search yourself and be surprised) it might give you pause for thought. You might even come to the conclusion that you're being asked to pay £9,000 for an engine. Great engine and everything, but not nine grands' worth of great. Looked at another way, a 2.0 Twin Spark motor in good fettle is surely worth more than whatever percentage of £995 you care to allocate to it. The 2.0-litre unit can use a bit of oil but surely that's good because it means you're always running fresh oil.

Then consider the generally held view that 147s were pretty well built. The absence of body blemishes on this 19-year-old car is testament to that. Maybe now you're thinking that either the V6s are drastically overpriced or that £995 147 2.0 Twin Sparks are a bit of a bargain, especially if you drive one back to back against a wheezy ST170 Focus.

In time-honoured fashion the Alfa badge on this one's boot has taken a turn for the worse but replacements are dirt cheap. Glue one of them on and suddenly you've got a car that from this distance at least looks like it's not long off the line. Underbody surface rust was picked up by the MOT tester at the end of 2014 but that's clearly been dealt with as it hasn't reappeared since. The only advisories on last October's MOT were three worn tyres and some play in a front wheel bearing.

We're told that the wheels are 16s, which means you're looking at £60 a corner (fitted) for good brand tyres, and a new bearing will cost the same sort of money. Gear change bushes and wishbones fail and warning lights come on for fun, but not much about the 147 is stupidly expensive or overly difficult to put right. Well, apart from the sidelight bulbs maybe. Cambelts (and the variators while you're at it) shouldn't be allowed to stay in a 2.0 TS for more than 36,000 miles unless you particularly like the sound of gnashing metal.

The mileage on this one suggests that it's been sitting around since October, which is no sort of fate for a quick-steering Alfa. As noted, it's more expensive than last summer's Lusso, but that one was sold as soon as it went up and was hailed as a huge bargain. When you look at what other regular 147s are going for (check 156s while you're at it, good ones suddenly aren't cheap any more) you might come to the conclusion that the prices for these well-appointed, well-built and generally pretty reliable Alfas are firming up at the bottom end.