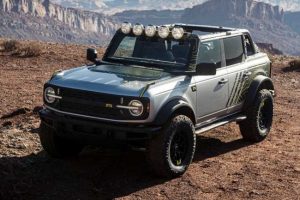 We are on the verge of one of the biggest automotive title fights in history. It isn’t the newest Golf R and Civic Type R going toe to toe or even Lamborghini and Porsche once duking it out on the Nürburgring. No, it’s actually the upcoming battle between the new Ford Bronco and the Jeep Wrangler for American off-road SUV supremacy. And one critical theater in this war will assuredly play out in the factory parts and accessory catalogs from Ford and Jeep as well as the broader aftermarket.

Everyone is probably familiar with the extensive Mopar parts and accessories backing Jeep’s Wrangler, which have been offered for years and end up dealer-installed on a surprising majority of new Jeeps sold. As for the new Ford contender, we’ve already covered leaked details from the Bronco’s upcoming catalog of aftermarket goodies. But, wait, there’s more! Hot on the heels of Jeep’s Wrangler Safari party in Moab, Utah—where it debuted four new concepts—Ford has announced that it’s teaming up with some pretty serious third-party manufacturers to ensure there will be a strong selection of aftermarket Bronco-enhancing off-road accessories.

Was the timing (and location) chosen intentionally to rain on Jeep’s parade? Maybe. After all, it is the Jeep Easter Safari. What matters more are the new goodies that Ford is ginning up for the Bronco via collaborations with RTR, ARB, and 4 Wheel Parts. RTR, for its part, isn’t new to Ford—it has been working on the Mustang for years, and they’re now expanding their bandwidth. Here’s a quick look at each aftermarket brand’s contribution to future Bronco owners’ depleted bank accounts:

The RTR accessories on offer include a set of custom rock sliders, a new rear bumper, and a sweet-looking 3D-printed grille. The RTR-festooned Bronco concept Ford displayed in Moab also shows off 35-inch Nitto tires wrapped around RTR Tech-6 wheels. There is also a fridge in the back, so you can slang a few cold ones after parking the rig and closing down a hard day on the trails.

ARB 4×4 Accessories also decked out a Bronco in off-road gear including rock sliders, new front and rear bumpers, a new differential cover, an air compressor, and, you guessed it, a fridge. Seems like a theme.

Rounding out this trio is a setup by 4 Wheel Parts. Like the others, it gets rock sliders and new bumpers, but it also comes with a winch, heavy-duty off-road suspension, a custom roof rack with light mounts, and an overhead tent by Smitty.

If you buy a Bronco, you’re going to be spoiled for choice when it comes to aftermarket parts, and that’s exactly the way Ford wants it. (Well, we’re sure Ford also wouldn’t mind if Bronco buyers perused its own factory accessories and parts before leaving the dealership, but we digress.) With so much on offer, the possibilities are endless. Good luck keeping your shopping cart empty and your checking account full, future Bronco owners.