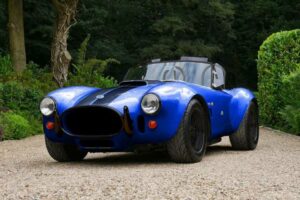 600hp a bit much for your Cobra EV? AC reveals a 300hp variant with increased range

‘Fearsome’ would probably have sold the reputation of early AC Cobras short, and none have been for the faint-hearted. Even though the new 4-electric promises a very different Cobra experience, with more than 600hp it’s still going to demand a level of respect.

Now AC has expanded its Cobra EV range, with a less powerful 4-electric. Where the first 460kW (617hp) model used the larger body like a Superblower, this latest model has half the power (230kW, or 308hp) and employs the smaller Cobra body as used the 289-engined cars.

With less car comes less weight, the 230kW taking 50kg off the 460kW car for a 1,190kg total. AC says that’s enough for 0-62mph in 4.9 seconds and 190 miles of range, against 3.8 seconds and 160 miles for the more powerful car. AC “guarantees an exceptional on-the-road performance and a memorable driving experience for the Series 4-electric.”

Unfortunately, half the power doesn’t mean half the cost for the new electric Cobra. With the 460kW kicking off at £168,000, the 230kW has a starting price of £148,000; a useful saving, but still £10k more than the conventional Superblower – now updated with another 70hp from its V8. And it isn’t hard to see where the more traditional Cobra appeal lies.

That said, we’re all aware that traditional appeal is probably going to have to change somewhat in the near future. “The march of the outstandingly efficient electric AC Cobras is gathering pace now,” said Alan Lubinsky, adding, “Lower overall weight reduces energy consumption, allowing the batteries to deliver a longer range and the ability to drive the car to AC’s traditional high standards for speed and acceleration which the marque has achieved over many years”. Reservations for both the 4-electric models are being taken now, with deliveries expected by the end of the year.