A weird niggle on my Mahindra XUV700 AX7 petrol AT: Need advice 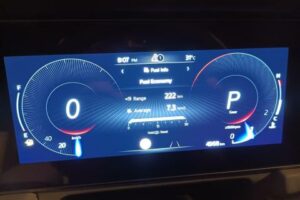 The fuel indicator on the left was constantly blinking and the level was glaring red. The range, however, was still showing a comfortable 222 km more to go.

BHPian IamNikhil recently shared this with other enthusiasts.

I had filled about 15 litres of petrol in the evening for a run around town for some work. The fuel indicator showed the requisite increment in fuel in the car and was reflected in the approx range on the MID as well. After a couple of hours, post a few stops, had halted at a location for over half an hour. Came back and started the car to be greeted with the “Low Fuel” audio warning and the blinking notification. The fuel indicator on the left was constantly blinking and the level was glaring red. The range, however, was still showing a comfortable 222 km more to go. Also, since I had just filled up fuel a few hours ago and that too from my regular HPCL outlet, I was confident about the range indicated on the MID, even though it’s an approximation. By this time, I had barely driven 20 km and definitely not 200 km; plus there wasn’t any bumper-to-bumper traffic either so there was no reason for the range to dip to such a monstrous extent.

First thought: Is there fuel leakage? Stepped down from the car and examined the car and the underbelly with the phone flashlight. Everything seemed to be in place and no indication of leakage whatsoever, no smell either inside or outside the car. Tried shutting off the vehicle completely and restarting around 3-4 times but the same recurring issue constantly.

Finally decided to take a break and just walk around the block for a bit and try restarting after around 10 mins. Went back and fired the ignition, praying all the while for things to be right. Lo and behold, the boot-up happened normally and everything was spick & span like nothing ever happened. Drove for a km or so and the Adrenox app sent multiple notifications stating “Fuel Filled”, these had not arrived when I had actually filled fuel a few hours ago.

Not sure what the niggle is, but will be taking the car to the Service Centre in a few days for the Apple Carplay update; have to get this checked then. Here’s what BHPian haribalram had to say on the matter:

On a serious note, an automobile needing to manage so many hardware components needs a very robust Operating system. At the moment, it appears a very fragmented universe with each manufacturer doing their own thing.

I am hoping for some consolidation through an open source or closed source OS (Android / Linux examples from other worlds) that reduces individual R & D for manufacturers but also adds maturity to the OS over time.

Perhaps, there is already something going in this direction that I may be unaware.