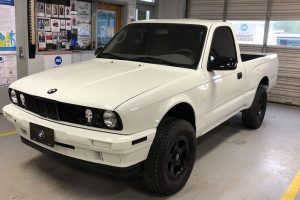 BMW has never put a pickup truck into production. There was that famous April Fool’s prank in 2011, where it revealed a ute based on the E92 M3, and it created a concept based on the vast X7 SUV, but nothing of the sort has actually been launched to buying customers.

Mercedes (briefly) sold the X-Class, which was quite clearly a Nissan Navara in Merc drag, but found that the market for luxo pickups isn’t really there just yet. That’s partly why the BMW roundel has never appeared on a truck, but a mashup with a Toyota Tacoma shows that it may not be a completely terrible idea.

Everything ahead of the A-pillar is from a 1987 E30 3 Series, so you get a subtly muscular bonnet, that classic front-end with round headlights and lovely, petite grilles. Remember those? All the underpinnings, plus the cabin and bed, look to be from a 2001 Toyota Tacoma, according to the original Facebook post by Alabama Auto Show.

It was created by students at the Shelby County Career Tech Education Center (CTEC), using two out-of-commission cars. Up close, there are bits that don’t quite work, like the join between the front fender and the door, but overall the execution looks pretty good. Maybe just ignore the fact it has two very different wheel arches. And we’d put actual lights where the Punisher stickers are pretending to be lights.

We reckon it’d be perfect for posh rednecks, and it wouldn’t have come from any other country but America.

It may have been built by students, but you could say it’s the best BMW-Toyota mashup since the Supra…