Home » Auto News » A Porsche 917 Made Out of Butterflies

A Porsche 917 Made Out of Butterflies 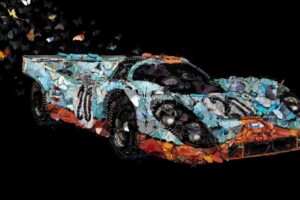 I was at Pebble Beach, walking the field, strolling among the Porsche 917s, when I ran into artist and Porschephile par excellence Heidi Mraz right next to the Martini-liveried 917K, the so-called “hippie” livery with all the green swirls on the blue background. Mraz had just gotten to sit in that car at Pebble, which helped explain why she had way more enthusiasm than I was able to muster at that post-dawn-patrol hour, and she began to tell me—at about 198 mph—a long and serpentine tale about the 917 and how it intersected with her latest work of art. 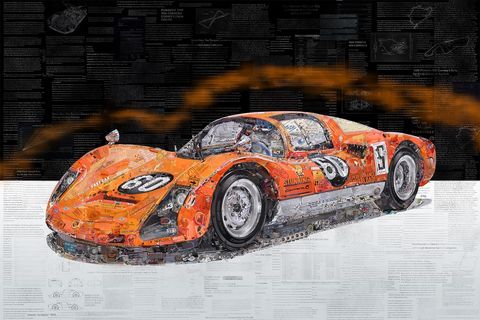 Mraz had earlier done another work of art based around a 906, a large, two-dimensional reproduction of the 906-134 using thousands of small scraps of paper cut from magazines or scavenged from some Porsche-related source or other, and glued them all together in just the right order and in just the right places to make a particularly splendid collage reproduction of a beautiful orange 906. She called that one “Shaped by the Wind.”

Now she had a new project that was almost done but was not yet ready for public release, so she made me and my friend, the car collector and racer Mitch McCullough, who happened to be standing there and who would keep standing there through the entire story politely nodding and saying “Oh yes,” and, “I see,” she made us both swear not to divulge anything about this new painting until it had been revealed publicly, which it was last weekend at her studio in Great Falls, Virginia. So I can tell you the story now. (I have filled in details where necessary.)

“The story of the 917, you probably have heard this but you know, they create this car, it’s crazy fast, but it’s truly unstable and the works drivers wouldn’t even drive It,” she began excitedly, even though she has probably told this story a few hundred times already, her eyes nonetheless just a little crazier than perhaps those of a puppy who has accidentally eaten an entire coffee filter’s worth of used grounds. “You know, they (the Porsche works drivers, specifically Jo Siffert and Brian Redman) choose to drive the other 910/908 instead (actually, they drove the 908). And so, on the very first lap at Le Mans ’69, there’s a couple of works drivers (in 917s, Vic Elford and Richard Attwood in one car and Rolf Stommelen and Kurt Ahrens in another) and a privateer (British gentleman driver John Woolfe, who had purchased his 917 just days before). The privateer goes out and on the very first lap, crashes and dies. So they (the Porsche team lead at that point by John Wyer) figured, ‘We got to figure this thing out.” 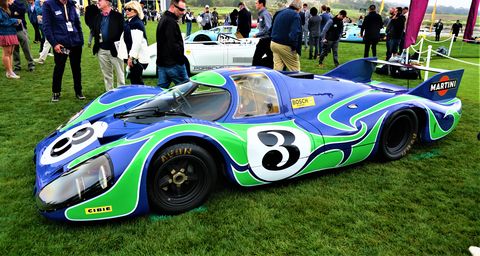 Indeed, that is approximately what happened in 1969, when the 917 was new and they were still sorting it out. It wasn’t really what you’d call stable.

“The stability is a big problem,” Mraz continued, never lifting. “They thought it might be suspension geometry, they weren’t sure… it’s around the time that John Wyer was brought in. So they take off to Osterreichring and it was one of those days, have you ever seen a cloud of gnats? Did you ever walk through one of those? They’re really light, and the car goes around a couple times and it comes back into the pit and the head engineers from Porsche (Wyer’s chief engineer John Horsman) sees these dead bugs all over this car… except on the rear wing. So he thinks, ‘It’s gotta be airflow. That area the bugs were not hitting it.’ As we know now, downforce is what helped hold this car down on the track.”

“So he takes out some aluminum and he creates this wedge (and applies it to the rear wing with duct tape) and the next morning they take the car out again and it is properly controllable, it is fast. Unbelievable, right? So it goes on to become one of the greatest race car of all time and the ‘71 5oth anniversary having it here (at the Pebble Beach Concours d’Elegance) is just unbelievable.”

Indeed, the Porsche 917 was one of the greatest race cars of all time, winning Le Mans in 1970 and ’71, after which it was basically outlawed and rebodied as the 917/30 to compete in the Can-Am, the series it so dominated that it abruptly killed the whole series.

“They had to ban that car it was so crazy fast.”

Which leads us to the artwork.

“So how do I how do I share a story like that?” Mraz asked rhetorically. “Believe it or not Porschephiles, most car enthusiasts, had never heard this story. The first time I heard it was when I read John Horsman’s book (Racing in the Rain: My Years with Brilliant Drivers, Legendary Sports Cars, and a Dedicated Team). He was really significant in figuring out what’s wrong with his car. And, and so how do I ideate that? How do I tell that story?”

“Well, if I use gnats to create it, that’s, like a million gnats because they’re tiny little things. So, an insect is basically a bug with wings, right? How do I create a bug with wings? I chose a butterfly.”

Indeed, 1000 paper butterflies cut by hand and assembled onto a four-foot by six-foot canvas called “Aerodynamics by Entomology.”

“Using butterflies as the medium was a natural choice. Symbolically, butterflies draw a variety of parallels to the 917’s story. They are an insect like the dead gnats that covered the car; both the 917 and the butterfly are lightweight, and each needed to undergo a metamorphosis in order to mature. Both are also symbols of immortality despite having short life cycles.”

Like what you see? Mraz is “Now accepting a limited number of commissions for 2022.”