Home » A Modern Chevy Silverado 454 SS? Here’s What It Would Look Like

A Modern Chevy Silverado 454 SS? Here’s What It Would Look Like 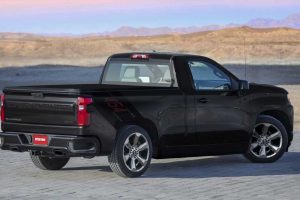 We love the classic Chevrolet 454 SS, but even the staunchest fans will admit that the other muscle trucks of the day—Ford’s F-150 Lightning, the smaller but wilder GMC Syclone—had it beat on actual muscle. Sure, the biggest engine in the lightest body style is a time-honored formula, but the torquey 454 truck motor wasn’t as special as its rivals. For its cool factor, though, the 454 SS packed plenty, and a bit of mystique, too. After all, Chevy hasn’t built a follow-up, a true muscle truck—although the 2003 Chevy Silverado SS came close. So, what would a modern 454 SS look like?

We asked talented artist Abimelec Arellano to imagine just that and to hew as close as possible to the original design in doing so. Single-cab pickups are a nonstarter in today’s truck market, but that’s what the 454 SS had originally—and it is our fantasy so that’s what we went with.

This 454 SS starts out with one of the stranger trucks in the company’s portfolio: the single-cab Silverado Trail Boss and RST models. Yes, Chevy makes them like that from the factory. And no, you can’t buy one unless you live in the Middle East. (You can, however, buy a single-cab, long-bed Chevrolet Silverado 1500 in the U.S., albeit in unremarkable work truck guises.) The 6.2-liter V-8 is available in single cab trucks in that market (not here!), so that’s a pretty good starting point—and the 6.2-liter small-block is a better performance engine than the old 454 big-block ever was.

The original 454 SS was available in a couple of colors, but black with red accents is the iconic color scheme. That’s what we have here. The bowtie gets a red stripe, the Silverado HD hood scoop gets a red accent bar, and a stylized and updated “454” logo graces the bed atop subtle matte contrasting stripes. A tonneau cover and side skirts help accentuate the lower ride height. And big, Torq-Thrust-esque wheels give it an appropriate modern muscle look.

The Silverado’s split front lamps already loosely recall the GMT400-based original’s iconic horizontally arranged fascia, and there are lower fog lights (albeit better integrated than in the original), so that helps cement the connection. But instead of a single side-exit exhaust like on the early 454 SSs, we chose to keep the slick, integrated dual exhausts on ours. They’re already appropriately sporty.

Will Chevy ever build a new 454 SS that looks like this? Could it ever hope to do battle with the Dodge Ram SRT-10-inspired, Ram 1500 TRX-based street pickup we rendered recently? We give it about a 0.00004-percent chance, due mostly to the single cab which is sales death except for the commercial market.

Now, a 454 with a crew cab could muscle in on the street truck market, carving a place out for itself while the off-road-oriented bad boys like the Ram 1500 TRX and Ford F-150 Raptor duke it out on the playa.  And with GM allegedly considering a supercharger package for their large SUVs, maybe a blown 454 SS pickup could ride along on their tire-smoked coattails. Or perhaps we should all look forward to a similarly powerful Silverado that’s more of the times: The upcoming all-electric one.