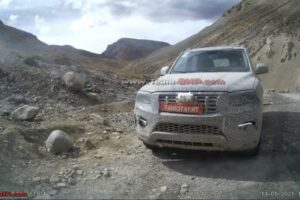 The convoy was led by a Mahindra Thar and even had a few current-gen Scorpios and Getaway pick-ups.

A convoy of about 7-8 next-gen Mahindra Scorpios was recently spotted in Leh. The SUV is being put through its paces, even as back home, Mahindra is gearing up to launch the XUV700.

The convoy was spotted by BHPian benzinblut on the Leh-Manali highway. It was led by a Thar and even had a few current-generation Scorpios and Getaway pick-ups as well.

The new Scorpio appears to be larger than the outgoing model. The SUV features a completely new look both inside and out. It is expected to come loaded with the latest tech, including a 360-degree camera.

The next-gen Scorpio is likely to be offered with a 2.0-litre diesel engine producing 158 BHP. The engine could be paired with either a 6-speed manual or an automatic transmission. An all-wheel-drive system is expected to be offered in select variants.

Thanks to BHPian benzinblut for sharing these images with other enthusiasts!