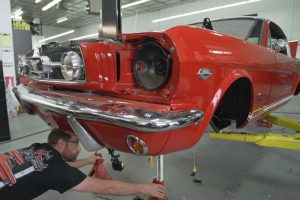 Back in the 1960s, the 1965 Ford Mustang Fastback looked totally boss. Fifty-five years later and a major upgrade at Kindig-It Designs, that same pony car is now totally bitchin’. Watch the super-sleeper’s transformation as Dave Kindig, owner/designer, and his crew make more muscle car magic in the season seven premiere of Bitchin’ Rides.

Related: Sign up for a free trial to the MotorTrend App today and stream 3,200+ hours of the best in automotive entertainment, including every episode of Bitchin’ Rides, Roadkill, 25+ seasons of Top Gear, and more!

The Salt Lake City, Utah-based custom-car fabrication shop is run by Kindig, who is the star of the show and he even has a bitchin’ beard to prove it. The client for the Mustang makeover is muscle car enthusiast Cesar Romero, who is not to be mistaken for TV’s Joker from the campy Batman series. You may recall the bitchin’ Camaro Kindig-It Design built for Romero in 2017—the super-clean 1969 Chevrolet Camaro took nine months to complete and currently cranks out 500 horsepower.

This Mustang Fastback is not original, but Romero wants to take it to a new level. He wants to keep a stock appearance, but he also wants an updated drivetrain and plenty of modern upgrades. Kindig’s recipe for the tall task at hand is “easy does it,” and the crew is up for the keep-it-simple challenge. They start it all from the ground up with new wheels, chassis, suspension, engine, and gauges.

Naturally, the crew would love to swap in a LS engine, but the client wants a new 5.0-liter Coyote V-8 instead. The client is always right, right? And the brand-new Mustang crate engine is rad, especially when it’s mated to a new six-speed manual transmission.

Fortunately, the well-restored car has good bones to work with and the hot rod gods must be smiling down on the team as they rip everything out and replace it with better bits. The crew swaps the trusty 289 cubic-inch V-8 engine with relative ease. They stuff the massive Coyote into the new satin-black engine bay, and it looks clean, tight, and just right. It also gets a new rack and pinion steering, and an epic new exhaust squeezed and welded in by hand.

By the end of the episode, the Cherry Red Mustang Fastback hits all the right marks with a proper stance and it sounds killer as it is fired up for the first time. It eventually pulls 416 horsepower on its maiden dyno run and looks ready to blow the doors off the competition.

They say good things happen to those who stay bitchin’ and tune in to see another one-of-a-kind dream machine built by Kindig and crew—we can dig it.