Home » Auto News » A 1,300-Mile Road Trip in a Mahindra Roxor UTV Shouldn’t Be Possible, But This Guy Pulled It Off

A 1,300-Mile Road Trip in a Mahindra Roxor UTV Shouldn’t Be Possible, But This Guy Pulled It Off 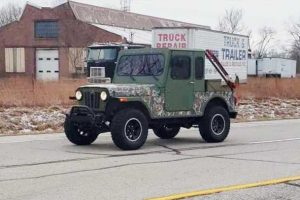 The Mahindra Roxor may or may not be a Jeep ripoff, but one thing’s for sure: owners love ’em. They treat them like any good enthusiast should, making them even better at what they’re meant to do, which usually means going off-road. Still, though, that hasn’t stopped some from improving their on-road manners, too, like this guy from Indiana who just took his Roxor on a 1,300-mile road trip across the snowy Midwest.

It’s a crazy idea, no matter how many comfort mods Jessy Wayne added to his diesel-powered CJ-5 lookalike. The trek involved taking off from Clinton, Indiana and heading to Rosehill, Kansas—a 617-mile trip one way. He then drove the Roxor back across Missouri and Illinois in blustery December weather, all while cruising at 70 miles per hour in his tuned side-by-side. Amazingly, almost everything went off without a hitch. 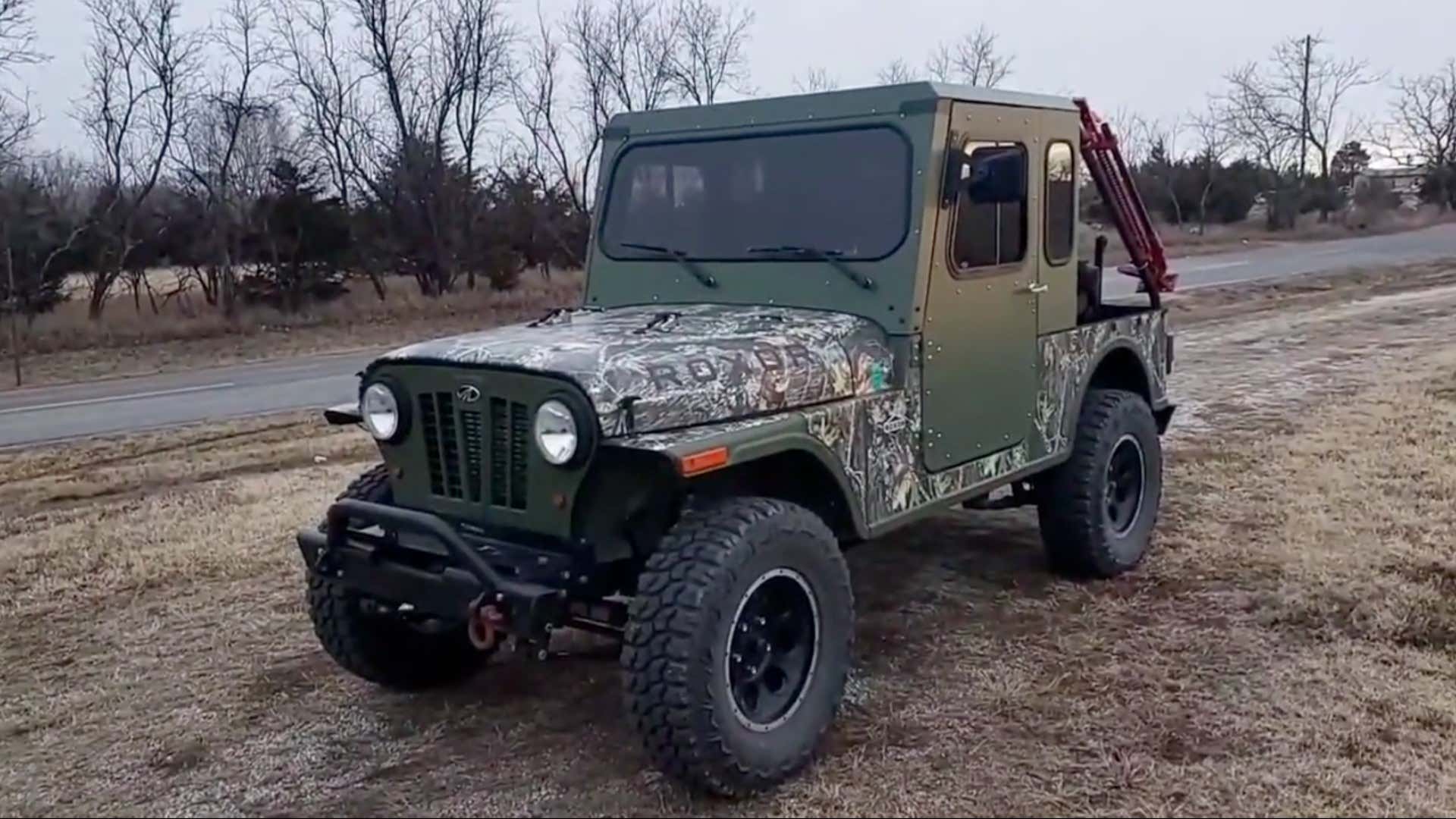 I talked with Wayne via Facebook and he explained the process of getting the Roxor road-legal. He mentioned equipping his rig with a half cab and lights—including blinkers and hazards—along with windshield wipers. After having it inspected by state police, he was well on his way to chasing that long white line. Pretty simple, all things considered.

Whether or not it needed any, Wayne also tacked on some performance upgrades to help the Mahindra’s 2.5-liter turbodiesel along. The crew at Diesel Freak hooked him up with a Stealth RX41 turbocharger, complemented by a charge-air cooler kit and an upgraded downpipe. The ECU was flashed with a stage two tune and the clutch was replaced with a stronger unit to handle the extra power. Wayne explained that he hadn’t strapped it to a dyno yet, but Wade LaLone at Diesel Freak quoted him around 140 horsepower at the wheels—a big upgrade over the Roxor’s factory rating of 62 hp. 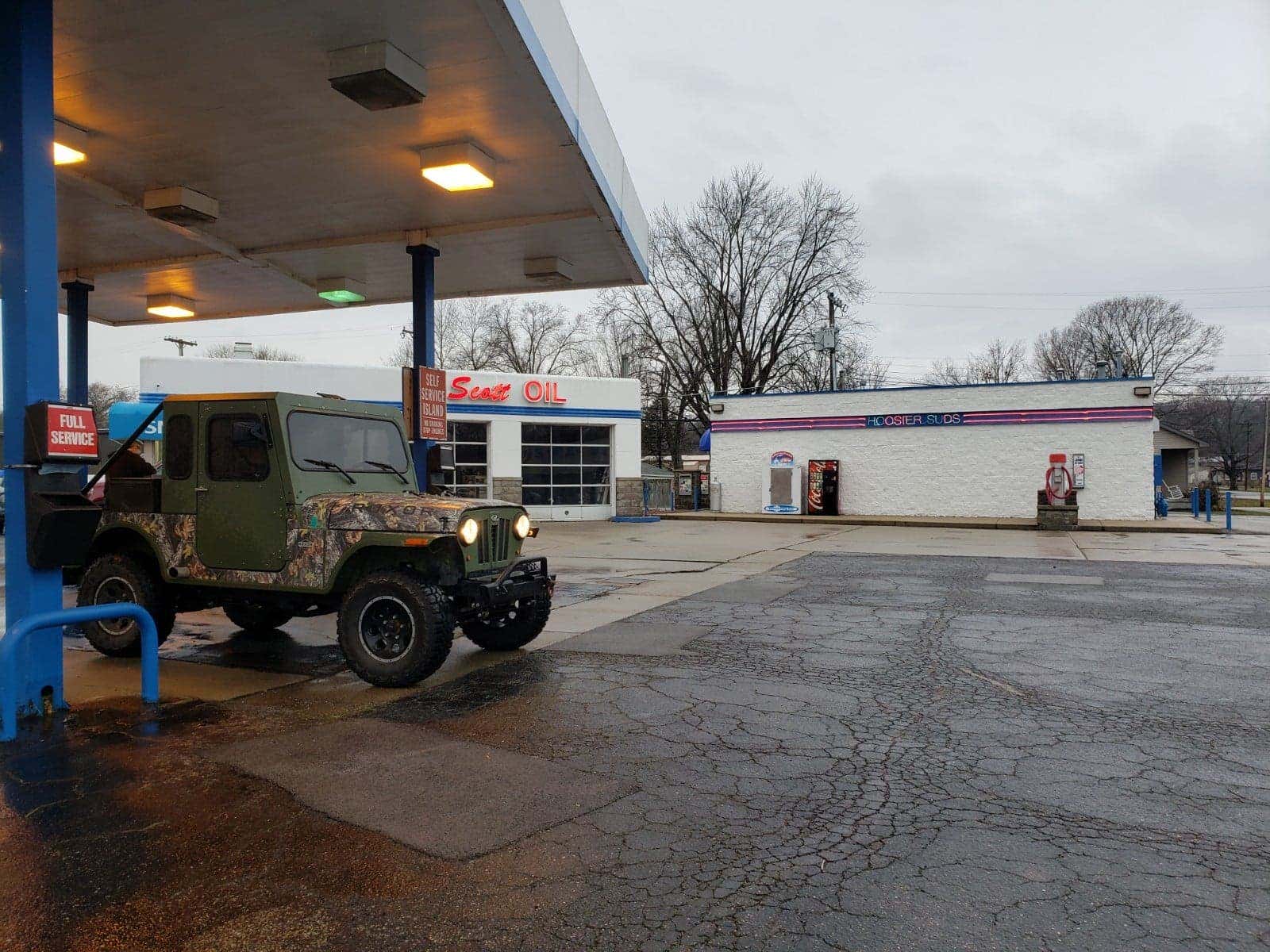 After installing the seats from a Toyota Celica and a heater from On the Rox Fab, Wayne was fully prepped. Handily, the Roxor came equipped with a 3.73 rear end from the factory, meaning he could easily hit interstate speeds, so long as there wasn’t a strong headwind.

With a full tank of fuel and his gear, Wayne found that the Roxor weighed 3,840 pounds. That’s actually a good deal more than the Jeep CJ-5 it was more or less modeled after, likely due to the diesel engine and 265/75R16 tires. Despite the relatively hefty weight and larger tires, he claims to have averaged about 21 miles per gallon. With the 12 gallon tank, he filled up every 200 or so miles. Some folks add auxiliary tanks to their Roxors, though that would’ve pushed Wayne’s above the two-ton mark, hurting his fuel economy but helping him pass more Conocos along the way. 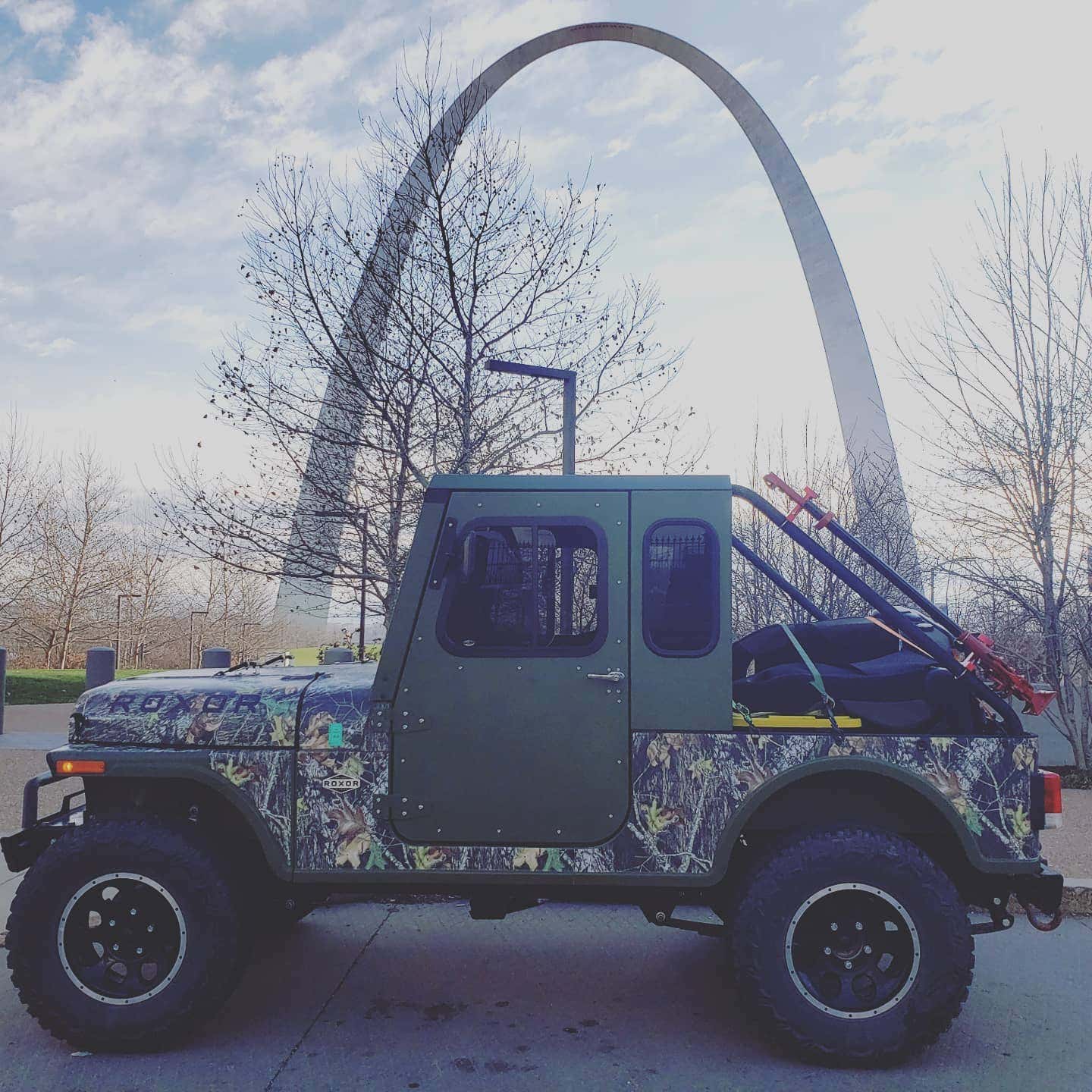 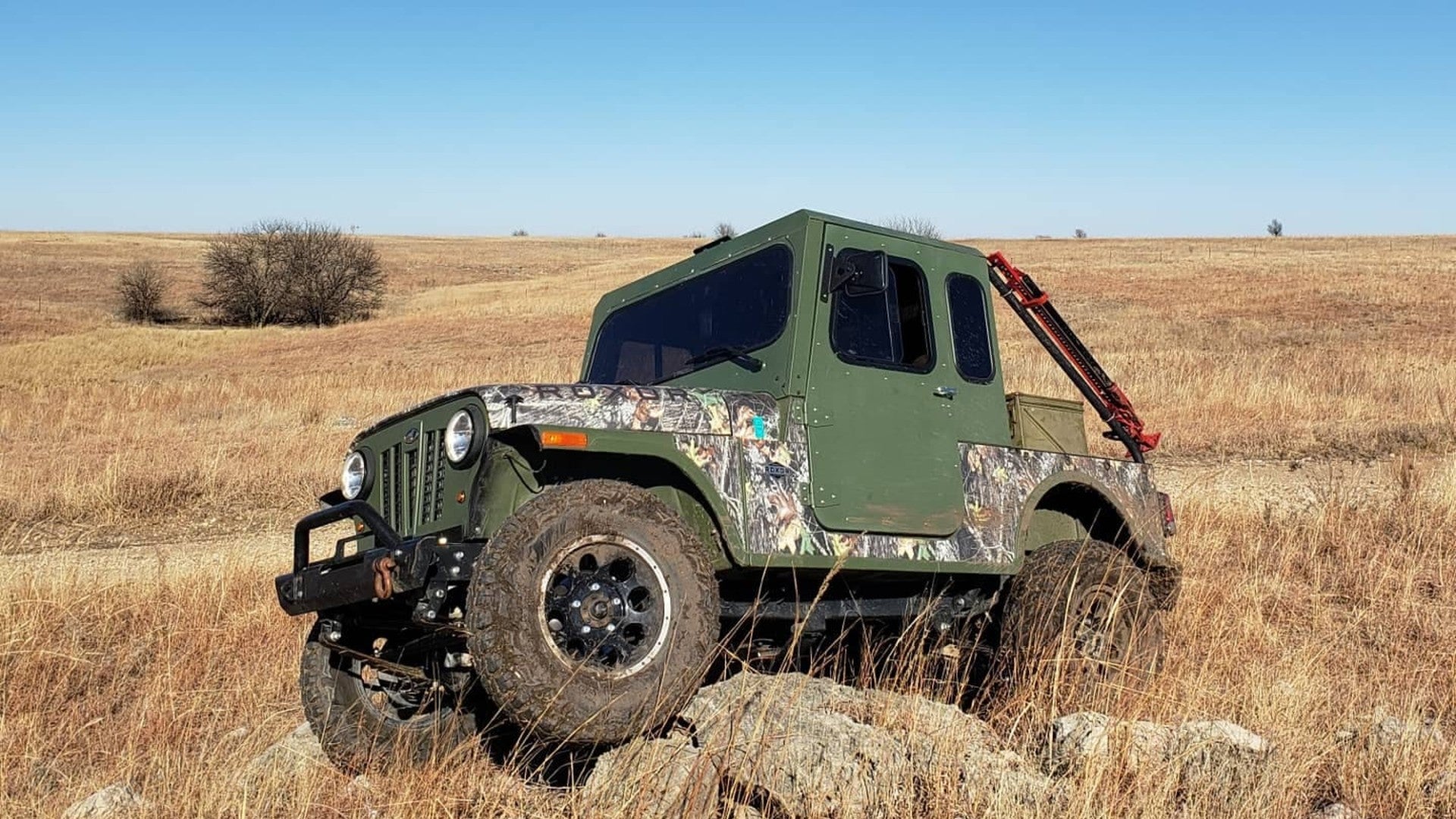 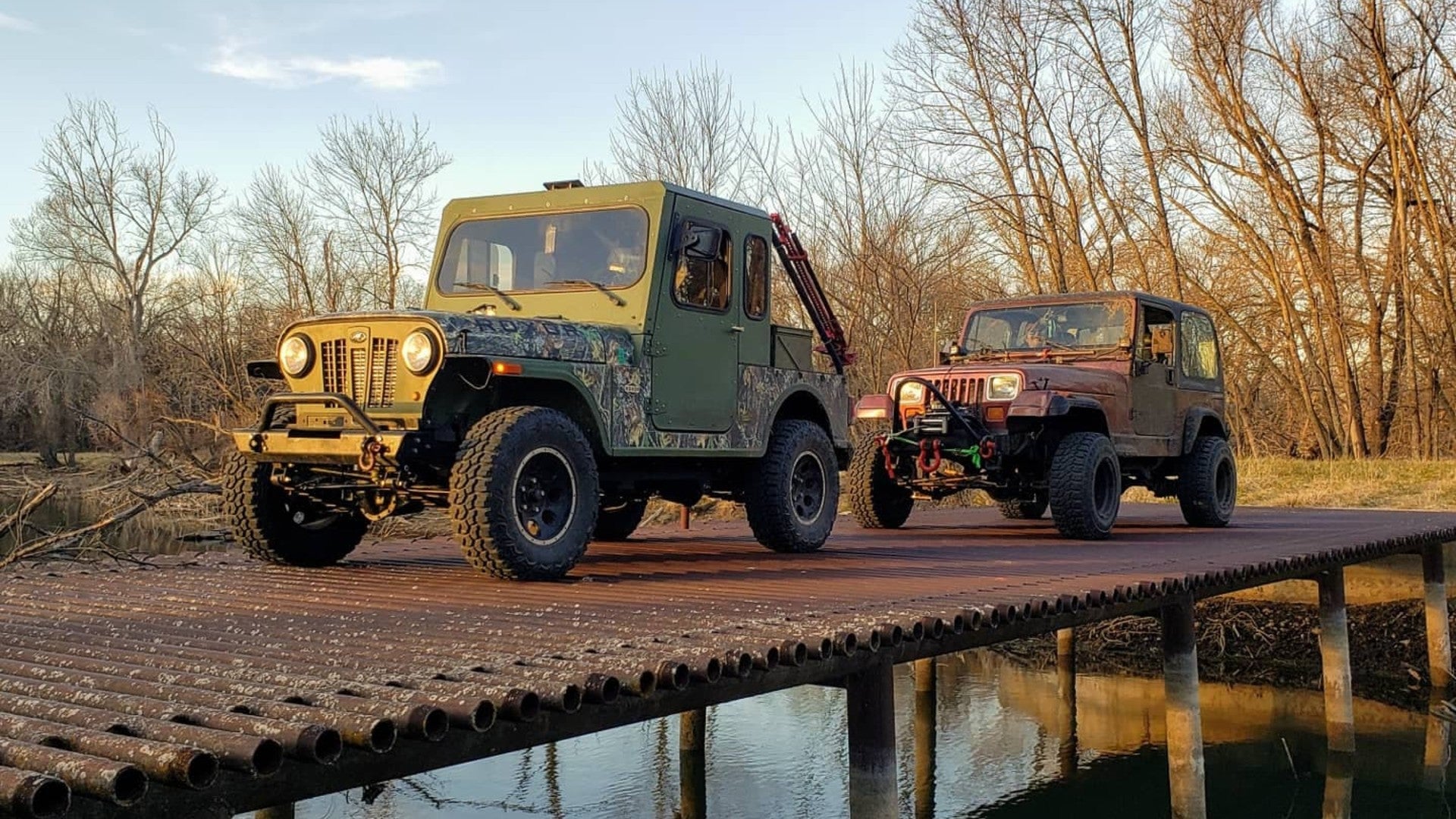 Wayne chronicled the trip on his YouTube channel, from a minor rear diff mishap in Illinois to driving past the Gateway Arch in St. Louis, and eventually wheeling alongside his brother’s Jeep YJ in Kansas. He made some on-the-fly adjustments, like covering his grille inlets to help bring the engine up to healthy operating temps. Weather in the Midwest brought snow and low 30-degree temperatures, so with the radiator sucking in so much cold air, the coolant temp gauge only showed 150 degrees. Blocking off the grille with duct tape brought those numbers up to around 180 degrees, making it much healthier for the Roxor to run for hundreds of miles each day.

The Roxor also got a new portable hand heater for the drive home that Wayne actually pointed at the windshield to keep it from freezing over. He mentioned in one of his YouTube episodes that the defrost vent was located directly below the wiper motor, which basically blocked all the heat from reaching the windshield. At last, he found a way around it and made it home relatively trouble-free, passing all sorts of plow trucks along the way.

Funny thing is, Wayne also owns a Jeep Gladiator Rubicon and he still chose to take the Roxor on his long haul. His wife followed him there and back just in case, but the new truck—which actually got worse fuel mileage than the Roxor—was never tapped for rescue duty. That either says something about this guy’s commitment or his sanity, but since he pulled off the stunt in style, we’ll go with the former.

Got a tip about Roxor road trips or other cool car experiments? Send us a note: [email protected]