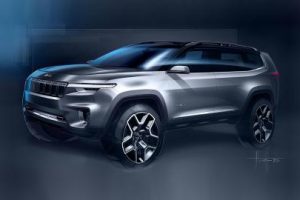 The H6 will be based on the same platform as the Compass and would also have a similar styling.

According to a media report, Jeep will unveil a new 7-seat SUV (codenamed: H6) later this year. It will arrive at our shores by mid-2022.

The report states that the new 7-seat SUV will be a global model and will be offered in left-hand-drive markets as well (codenamed: H1). The right-hand-drive version will be manufactured in India from April 2022 onwards. In fact, Jeep’s Chakan plant will become the global production hub for the right-hand-drive H6.

The H6 will be based on the same platform as the Compass and would also have a similar styling. Like most 7-seater models, the H6 is expected to get an extended rear end with an upright rear fascia in order to accommodate the third row of seats.

Expect the H6 to be equipped with features such as a touchscreen infotainment head-unit, ventilated seats with captain seats in the second row and a panoramic sunroof.

Reports suggest that the H6 will be powered by the same 2.0-litre, 4-cylinder diesel engine that is available in the Compass. While in the Compass, this engine produces 168 BHP / 350 Nm, the H6 will get a slightly more powerful version. It is likely to be paired with a 9-speed automatic transmission and an all-wheel drive system.