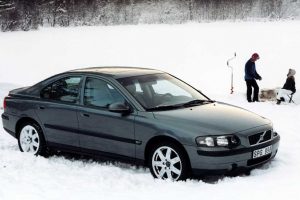 Volvo is recalling up to 54,000 of its older S60 and S80 models after an airbag explosion killed one driver, reports the Associated Press. The airbag was not made by Takata, yet U.S. government documents show that the Volvos’ inflators behave much like the deadly Takata airbags when they explode, sending shrapnel across the passenger compartment.

Auto parts supplier ZF/TRW made the Volvos’ inflators, the AP reports, and while they weren’t filled with ammonium nitrate like Takata’s airbag inflators were, they explode in a similar, highly dangerous fashion.

Any airbag recall over shrapnel inevitably invites a comparison to Takata’s airbag recall, which was the largest automotive recall in history, where deteriorating ammonium nitrate in the inflators caused the airbag’s metal canister to explode. The Takata recall included at least 63 million cars in the U.S. and some 100 million worldwide, the AP notes. Faulty Takata inflators caused 26 deaths, including 17 in the U.S. alone.

Volvo will replace the inflators for free in the affected vehicles, and is currently working with the National Highway Traffic Safety Administration to determine whether other vehicles had the same inflators installed. Some 13,800 of the roughly 54,000 cars are currently registered for road use, per NHTSA stats cited by the AP.

ZF/TRW Spokesman Tony Sapienza told the AP that the company is unsure whether the same inflators were used by other automakers. According to the NHTSA, this is the only known death caused by the ZF/TRW inflators.

If you own one of these Volvos or got a similar notice for a different airbag fault, please don’t put it off and add to the statistics. Take care of this recall immediately.