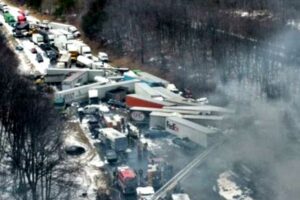 As reported by PA Homepage, a tragic crash in Pennsylvania claimed several lives on Monday morning. A deputy coroner from Schuylkill County stated that three lives were lost in the major pile up that occurred on Interstate 81, with that total later updated to 5, as reported by Fox 3 Now.

The incident occurred on I-81 North in the area around the exit towards Hegins Township. The crash was precipitated by a heavy squall that significantly reduced visibility in the area and the already-slick roads, according to police. At 5:00 pm, the area still remained an active crash site with smoke pouring from the wreckage of cars, trucks, and other vehicles caught up in the wreck. Over 50 cars were involved in the pile-up, according to Pennsylvania State Troopers responding to the incident.

24 were taken to hospital as a result of injuries sustained in the accident, with several survivors airlifted from the scene. Uninjured drivers and passengers were taken to Goodwill Fire Company in Minersville where they could be safely reached by family members. All lanes on I-81 were shut down as a result of the incident.

A photo of the aftermath taken by John Coviello shows the sheer size of the pile-up. Over ten large trucks can be seen scattered across the road, with smoke pouring from a red truck trailer on fire.

Vision from the crash site is confronting, with vehicles piling into each other as they fail to shed any appreciable speed on the slick road. Stranded drivers and passengers can be seen standing with their vehicles on the road, often leaping out of the way at the last second as more vehicles come barrelling into those already crashed. Meanwhile, smoke can be seen pouring from several wrecks as fires broke out in crashed vehicles.

Meanwhile, in a dash cam video from a vehicle that became part of the pileup, it’s apparent that visibility was atrocious in the area at the time. Precious little grip was available either due to the inclement weather conditions. The driver hits the brakes, but barely slows at all, with the vehicle skating into a truck filled with gas cylinders. More thumps and rumbling can then be heard as more vehicles plow into the pile-up.

Such an incident is a good reminder that it’s a very bad idea to get out of one’s car and stand in the road after a crash. Staying inside the vehicle or getting well away from the roadway are both preferable to standing in the path of further vehicles approaching the scene of the crash. It’s particularly relevant on interstates, where vehicles are traveling at high speeds and drivers are not expecting to stop.

It’s also helpful to drive more slowly when visibility is poor and conditions are slippery. Danger may not appear until the last moment, and stopping distances are wildly increased on slick roads. Thus, driving slower helps provide more time to react to hazards, and also means that damage and injuries will be milder if the worst does occur.