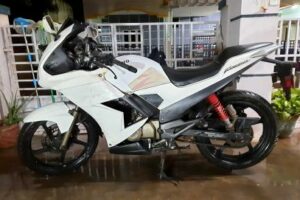 Things started to go south when I filled more than necessary engine oil & rode the motorcycle for over 200 km at 80 km/h.

BHPian efuture recently shared this with other enthusiasts.

Before starting, I’m putting up the latest picture of my bike. I washed it after a long time and it does look good with all plastic parts in place. It’s a 2015 Hero Karizma ZMR V2 with a fuel injector and digital instrument cluster with close to 40,000km on the ODO. I did not service the bike properly in the last 2-3 years other than regular engine oil replacement. Due to poor maintenance and age, the bike is in terrible mechanical condition and needs a major overhaul.

This is partly due to my DIY engine oil refilling back in 2019. I filled the engine oil to more than the max limit and rode the bike on the highway for more than 200km at 80+km in full throttle even after the bike refused to move at low speeds. I took the bike to Hero service center the next day and they flushed the excess oil, and cleaned the air filter. But all the problems started from there one by one.

I took the bike to multiple Hero service centers and local mechanics, but after spending close to 20k, nothing worked and the bike was getting worse after every service. Pickup and throttle response was getting worse after every km and fuel efficiency deteriorated to 25kmpl. I’m getting an eye-watering 220 to 250km range for every 1000 rupees refill even when the bike is ridden at speeds less than 60 kmph.

I do not find any good bike similar to ZMR V2 for less than 2 lakhs presently in the market. Also, 2 lakhs for a 2-wheeler doesn’t sound good in my opinion. I’m in confusion about what to do with the bike – whether to completely restore it back to the pre-DIY era or replace it with something else.

A long list of issues is below. Looking forward to your valuable suggestions and service center reference in and around Chennai.

The strange thing is the bike starts well in the very first ignition and runs even though the ride is very shaky.

I am thinking of the following options:

Here’s what BHPian TorqMaster had to say about the matter:

See if you can get a second-hand Karizma engine and plonk that in, should not cost too much money. Most of the issues you mentioned should be sorted barring the consumables like cables, suspension oil seals etc.

The hassle would be in getting the engine number updated in the RC book.

Here’s what BHPian saitvsk23 had to say about the matter:

Hi there. The ZMR V2 engine is one of the most potent engines from the Hero stable since the JV had ended. Also, the V2 ZMR was developed with inspiration from the flagship model of the Buell 1190 line (Hero MotoCorp had bought EBR-Erik Buell Racing in hopes of expanding tech and resources). So as a result, the radical design was disapproved by Karizma purists, but radical compared to today’s 250cc commuters which are priced at a perceived premium.

These are the plus points, according to me:

This post might be detailed, but here’s what I think the problems come from. I’ll be listing them in order.

Here’s what BHPian Gypsian had to say about the matter:

Pouring excess oil into the engine will invite more air into the engine chamber. The air and oil mixture, along with the fast rotating crankshaft will produce a foam-like substance which degrades the lubricating capacity of the engine oil at a large scale. Consequently, due to the inefficient lubrication, the engine temperature will start to rise and the high temperatures might cause an engine lock, which is why your engine is resistive while you throttle.

I suggest a complete overhaul i.e. crank resetting, new cylinder kit and head valve re-setting at a proper lathe. If a proper mechanic handles the overhaul job, I’m certain it will be as good as new. Don’t opt for reboring as no lathe guy will set perfect clearance. Do change the timing chain.