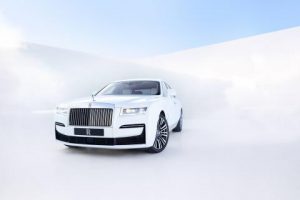 Rolls Royce has unveiled the second generation Ghost. The previous iteration of this entry-level Rolls, which debuted in 2009, was the most successful car in the carmaker’s line-up.

Unlike other Rolls Royce cars, the Ghost has been designed for the self-driven car owner. The car gets a traditional chrome grille with the retractable Spirit of Ecstasy. It gets redesigned LED headlights with C-shaped DRLs and a full-width air dam at the bottom. The rear fascia has also been redesigned. As is with any other Rolls Royce model, the new Ghost also gets rear suicide doors.

On the inside, the new Ghost gets lamb’s wool carpets, champagne fridge between the rear seats, illuminated roof liner with 850 stars including 8 shooting stars mimicking the sky above Rolls-Royce’s headquarters at Goodwood and an 18-speaker music system.

The second generation Ghost is based on a new aluminium spaceframe architecture with 50-50 weight distribution. It also gets all-wheel steering, a suspension system that features a forward looking camera that can prepare the suspension based on the road surface and a GPS based transmission that can decide the optimum gear for upcoming corners.