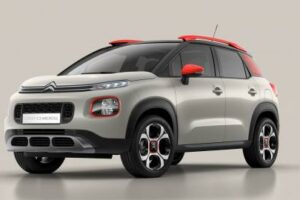 The next-gen Citroen C3 Aircross is being developed for Indian and South American markets.

Citroen is said to be working on the next-generation C3 Aircross. The new model is expected to arrive in 2024 with mild hybrid and electric powertrain options.

The next-gen C3 Aircross will be based on the CMP / e-CMP platform. The car is expected to be larger than the outgoing model, measuring around 4,300 mm in length.

In terms of styling, Citroen is likely to carry forward its quirky design language. Expect to see an overall rugged look featuring a split headlamp setup.

Reports suggest that the C3 Aircross could be offered with a reworked 1.2-litre turbo-petrol with mild-hybrid tech.

Interestingly, there will be an all-electric version on offer. It is said the e-C3 Aircross could come with a single electric motor producing 134 BHP. It could be powered by a 50 kWh battery with a maximum range of 345 km. As per rumours, a 99 BHP version could also be on offer.

It is said that the next-gen Citroen C3 Aircross is being developed for Indian and South American markets. However, there hasn’t been an official word from Citroen India yet.