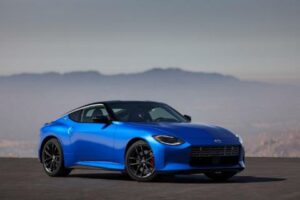 The company will also be offering a limited edition ‘Proto Spec’ option, based on the top-end variant, which will be limited to just 240 units.

Nissan has finally unveiled the much-awaited production version of its ‘Z’ sports car. The new Nissan Z looks very similar to its prototype version unveiled this time last year, albeit with a few changes to give it a more aggressive look.

The new Nissan Z carries forward the square grille at the front, flanked on either side by LED headlamps with the curved LED daytime running lights. The sports car will sit on 19-inch alloy wheels while the rear features LED tail lights and an integrated spoiler on the boot lid.

On the inside, the Nissan Z comes with a cabin layout similar to what we saw on the prototype version. The sports car features a 12.3-inch digital instrument cluster, a large central infotainment unit with connected technology and a host of other equipment as well. There are three gauge pods on the central part of the dashboard displaying boost pressure, turbo speed and voltage.

Powering the Nissan Z is a 3.0-litre twin-turbocharged V6 petrol engine producing 400 BHP and 475 Nm. It is mated to a 6-speed manual gearbox, although a 9-speed automatic transmission is available as an option. Power is sent exclusively to the rear wheels. Nissan is yet to announce the acceleration and top speed figures of the Z.

The Nissan Z will be offered in a choice of two trims – Sport & Performance. The company will also be offering a limited edition ‘Proto Spec’ option, based on the top-end variant, which will be limited to just 240 units.

The Nissan Z also comes in a wide range of exterior colour options, both dual-tone and single tone. There will also be a variety of interior themes to match.

The new Z is the successor to the outgoing 370Z, which first debuted over a decade ago. Pricing for the all-new Nissan Z is yet to be revealed, while sales & deliveries are expected to begin from mid-2022.