2023 Mercedes-AMG SL43: The Lighter, RWD, Four-Cylinder SL We Might Not Get 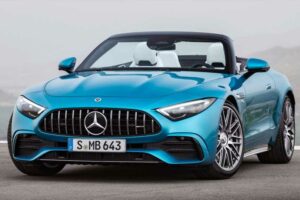 Just as a previous reports predicted, the new Mercedes-AMG SL is getting a four-cylinder, entry-level variant. However, before those looking to get into Merc’s drop-top on a relative budget get their hopes up, there’s a chance this car may not be coming to the U.S. For the rest of the world, however, what you’re looking at here is the Mercedes-AMG SL43, which is powered by the same M139 2.0-liter turbocharged four-cylinder that powers many of the company’s more compact, “45” grade offerings.

In the SL43, this engine has been placed longitudinally instead of transversely like it is in, say, the A45 hot hatch. In this application, the mill is rated at 381 horsepower and 354 pound-feet of torque. Hooked up to a nine-speed auto, zero to 62 mph is accomplished in 4.9 seconds while top speed is electronically limited to 171 mph (275 km/h). For comparison, the 4.0-liter twin-turbo V8 in the SL55 makes 469 hp while the same engine in the SL63 pumps out 577 hp, both of which The Drive’s Managing Editor Jerry Perez recently reviewed. 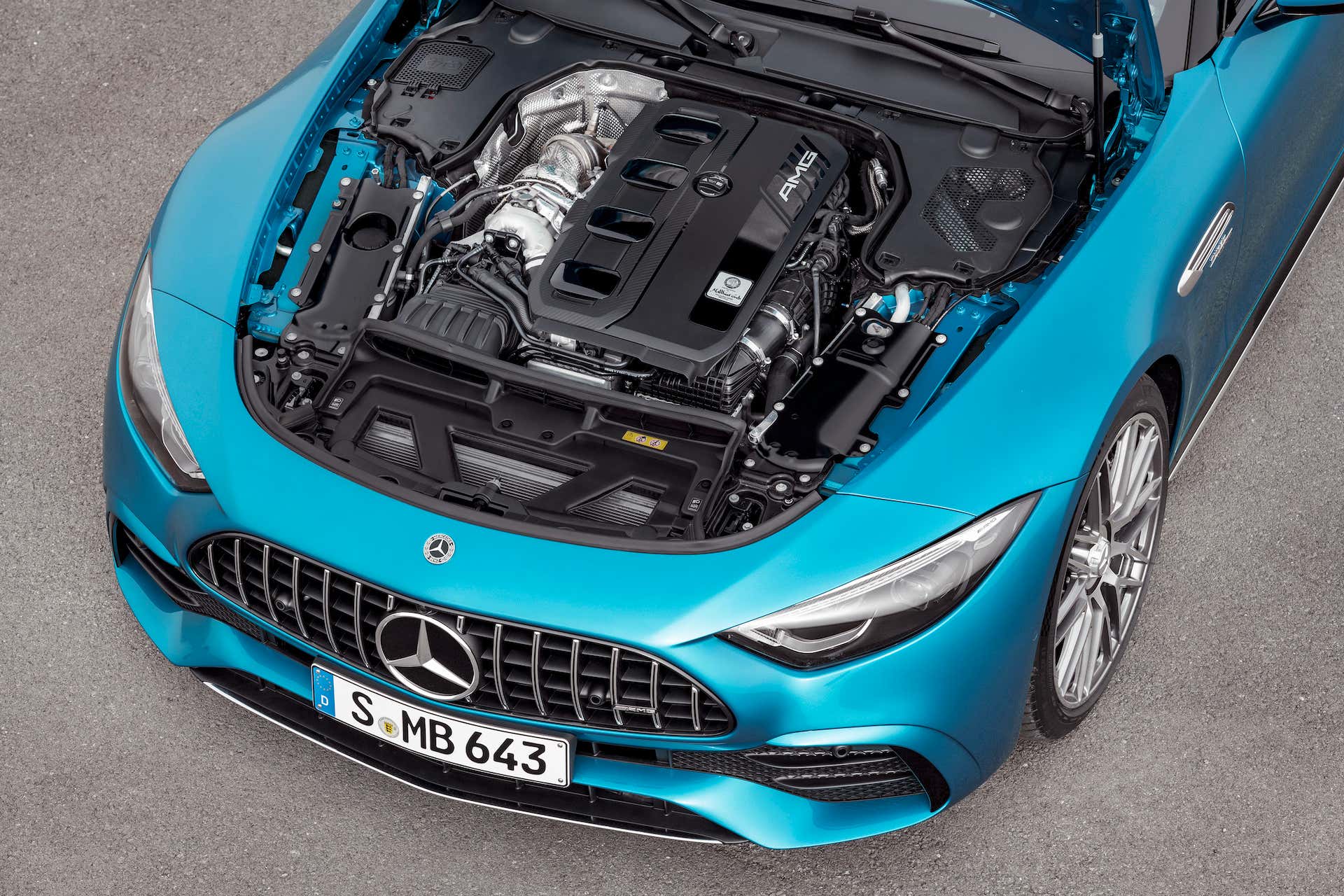 Also differentiating the 43 from those more powerful SLs is the fact that this four-cylinder version is rear-wheel-drive whereas the V8s are all-wheel-drive. The company also says the SL43 should have “distinctly discrete” handling compared to its V8 brethren due to the reduced weight sitting over the front axle. Translation: this could be the lighter-weight, rear-drive SL For Drivers.

As Jerry put it in his review: “The biggest detractor in driving the SL at speed: the weight. The SL is just too heavy to be properly slung around the twisties.”

After tracking down both cars’ weight figures, we found the SL63 (likely in European spec) to weigh 1,970 kilos or roughly 4,343 pounds. The SL43, meanwhile, comes in at 1,810 kilos, or 3,990 pounds. This is a difference of 353 pounds, most of which rested over the front axle. This means that the SL43, ladies and gentlemen, truly has the potential to shine in the very same areas where the 55 and 63 does not.

Moving on. Mercedes-AMG is particularly proud of this car’s electric exhaust gas turbocharger, a technology that’s said to be taken directly from the company’s Formula 1 operation. The SL43 is apparently the first-ever production car to ever use it and it provides better throttle response across the rev range while simultaneously benefitting efficiency. 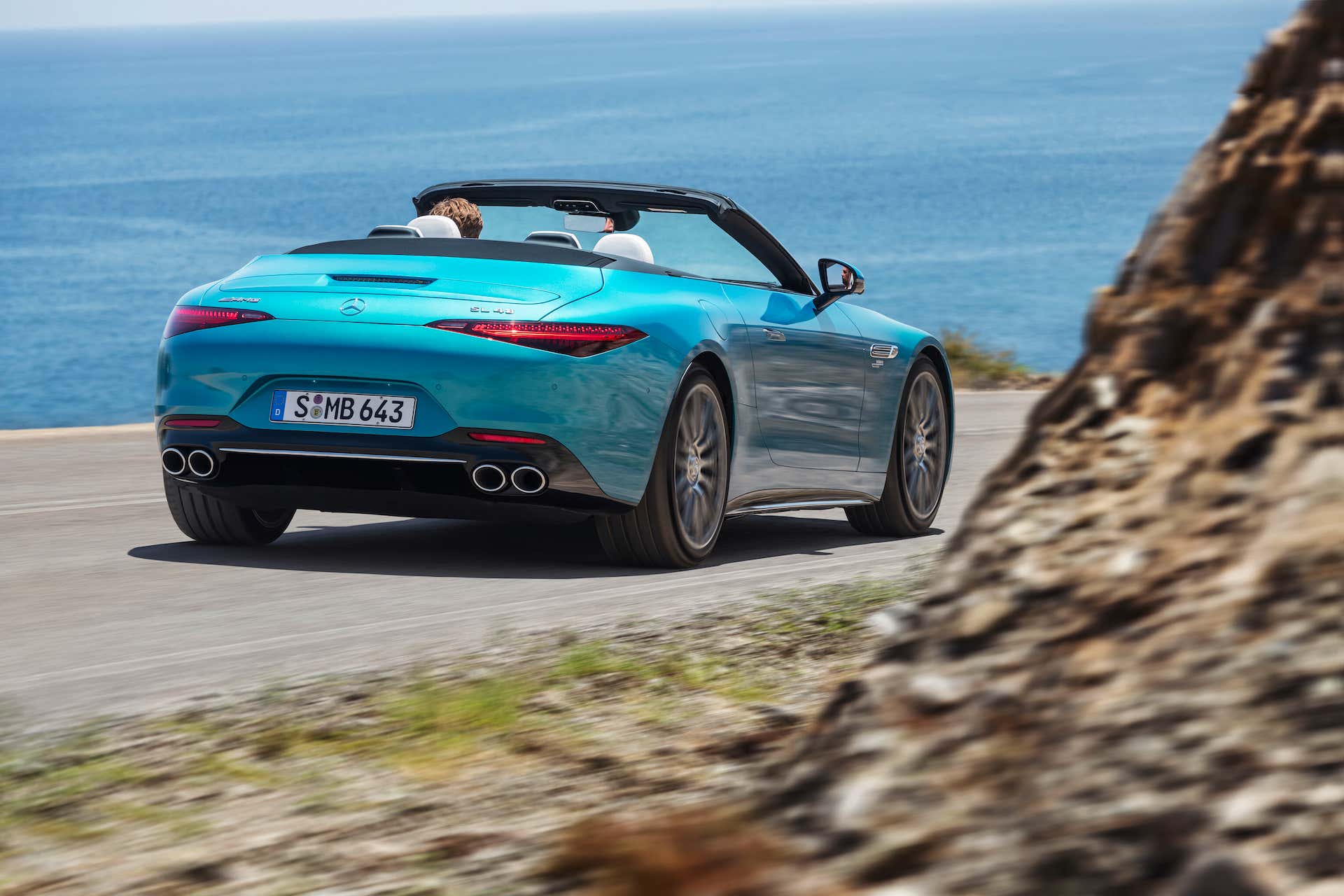 A small electric motor lives on the turbocharger shaft between the exhaust side’s turbine wheel and the intake side’s compressor wheel and is essentially able to pre-spool the turbo electronically, improving response and allowing for more torque at lower revs. Max torque is available from 3,250 to 5,000 rpm. It’s all powered by a 48-volt electrical system that also propels the starter-generator which can temporarily add 14 hp and serves as a mild hybrid propulsion system that smooths out starts and stops, particularly when auto start-stop is enabled.

As for SL43-specific features you can see from the outside, the new base SL gets round quad exhaust tips instead of squared-off ones, just like the previous report predicted. Nineteen-inch wheels are standard but the same 20 or 21-inchers from the more powerful models can be added as options. 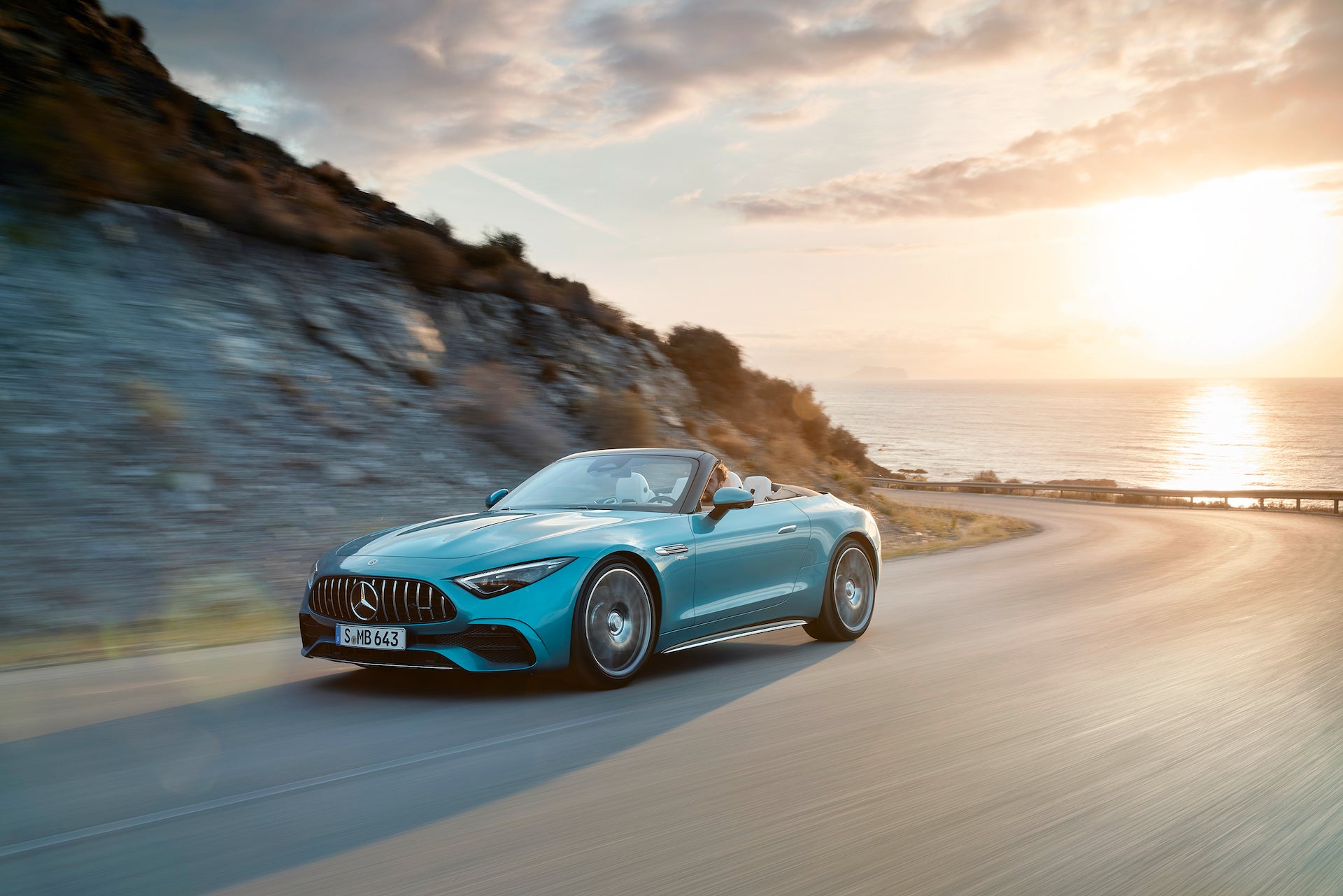 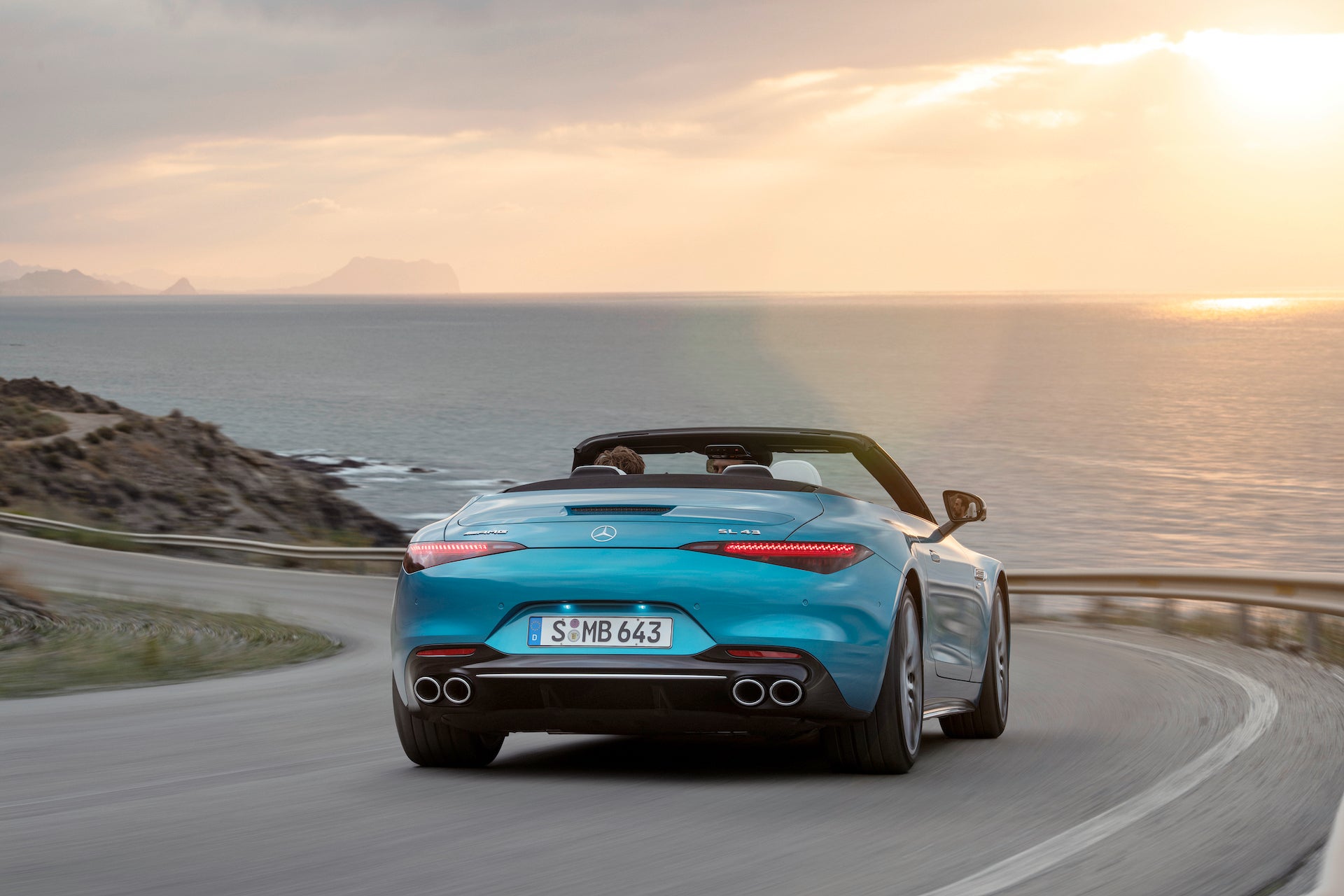 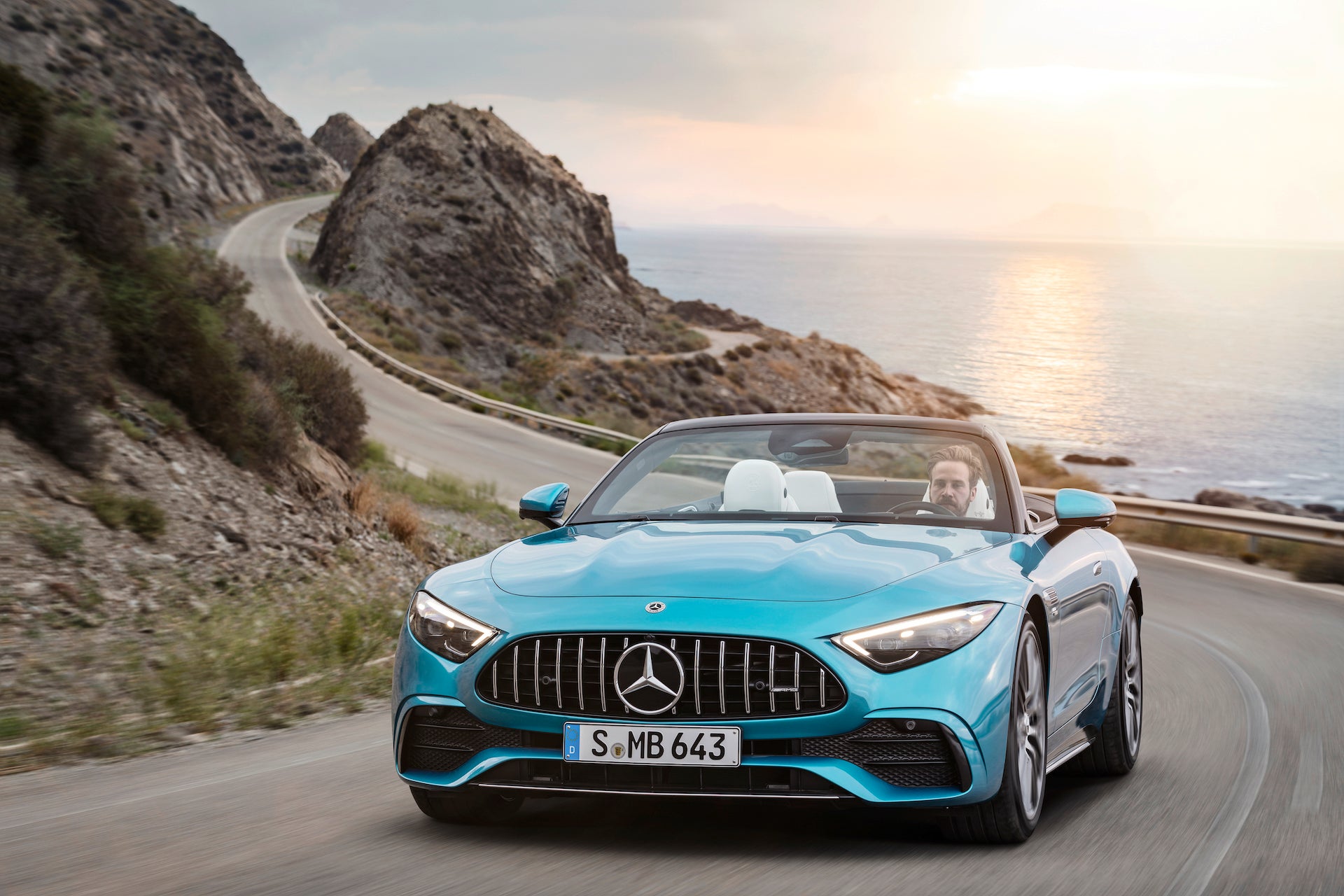 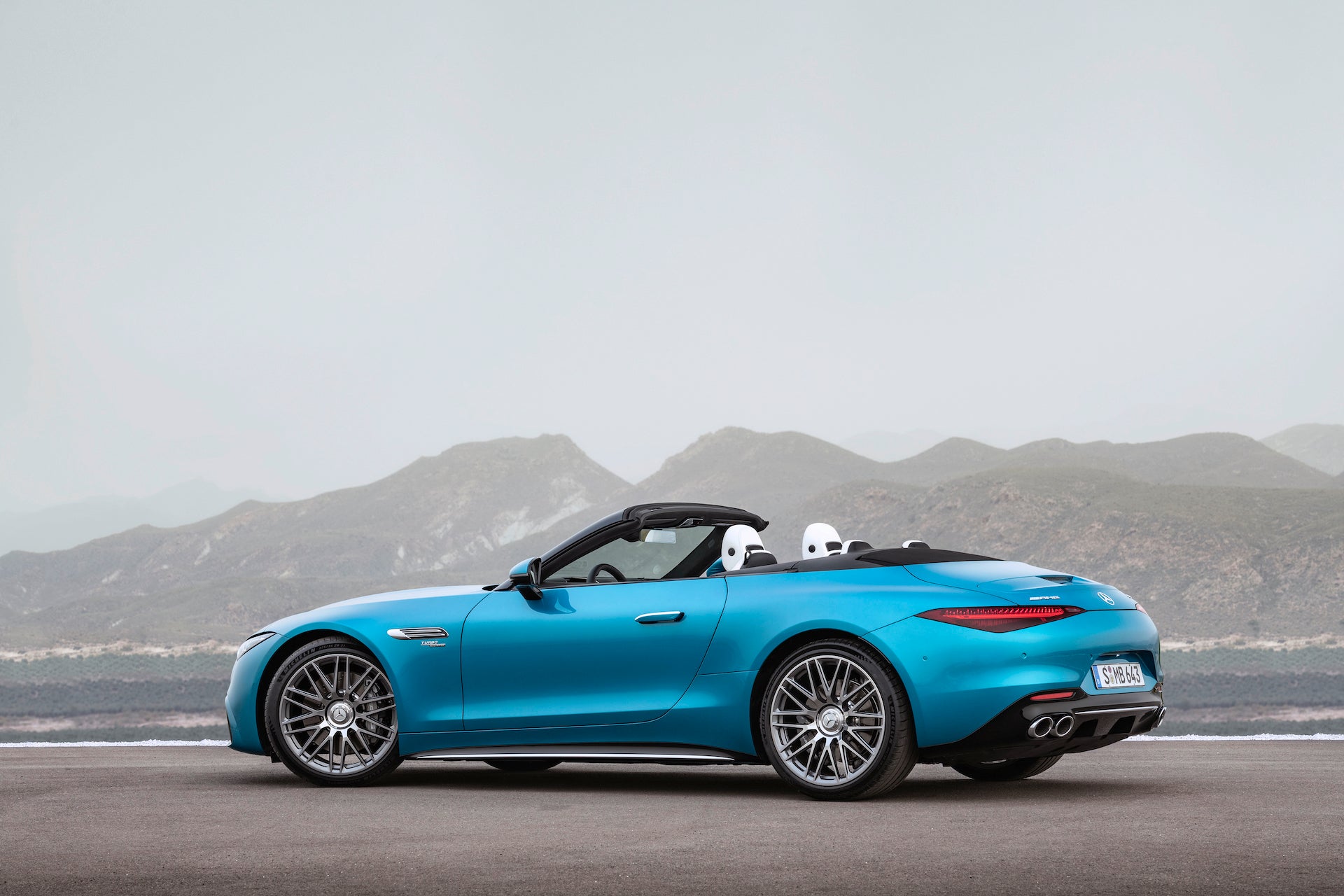 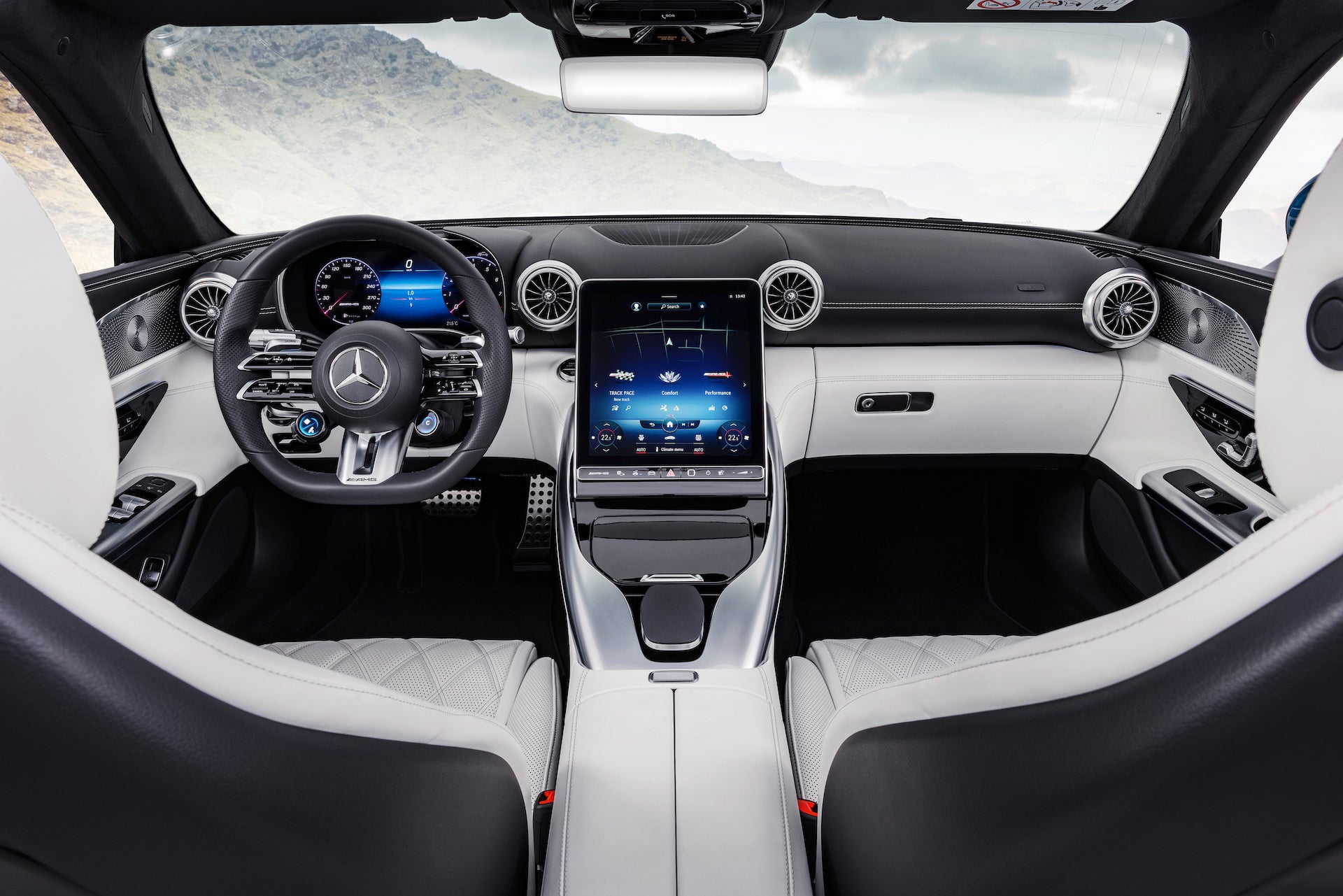 When asked whether or not this car is coming to the U.S., however, a Mercedes spokesperson replied, emphasis mine: “Please note the Mercedes-AMG SL 43 is currently still under consideration for the U.S. market. We do not have any further details to share regarding U.S. availability at this time.”

So, basically, they’re tellin’ me there’s a chance.

Got a tip or question for the author about the SL? You can reach them here: [email protected]