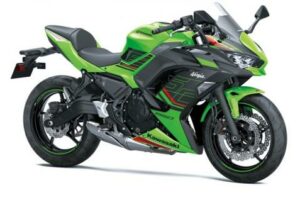 The Ninja 650 now comes with a switchable traction control system.

The updated Ninja 650 now comes with a switchable traction control system. It has two modes – Level 1 and Level 2. Besides this, no mechanical changes have been made to the bike.

The bike rides on conventional telescopic fork suspension at the front and a monoshock at the rear. Braking is handled by twin 300 mm discs up front and a 220 mm disc at the rear, supported by dual-channel ABS.