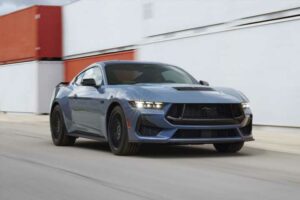 Styling alterations abound, but the seventh generation clings onto its most important asset – that 5.0-litre V8

Gosh, it seems like only yesterday that I was in Munich for the launch of the current Ford Mustang. I say ‘current’ because when I last looked it was still on Ford’s website, here in the UK and the US. But it’s soon to be the old Ford Mustang, because this, ladies and gentleman, is the new one. The seventh generation, no less, and just revealed at the Detroit Auto Show. It will also be the last with a V8. At least that’s what an American journalist told me, who had heard it from a horse’s mouth – the horse being either William or Edsel Ford, but I can’t remember which. Whomever it was, I do remember she said he already had his name down for one, because he wanted the last V8 ‘Stang.

Even this car wasn’t a given. Jim Farley, CEO of Ford Motor Company, noted: “Investing in another generation of Mustang is a big statement at a time when many of our competitors are exiting the business of internal combustion vehicles. Ford, however, is turbocharging its ICE growth plan, adding connected technology, opinionated derivatives, and hybrid options to our most profitable and popular cars – all in the Ford Blue family – on top of investing $50 billion in electric vehicles through 2026.”

The world still loves a Mustang – the real ones; less so the Mach-E ones – and that shows in the 10-million-plus examples Ford has shifted in the last 58 years of continuous production. The manufacturer says it’s been the world’s best-selling sports car since the current model arrived in 2014. It’s also a star of the big screen and little screen, featured in music videos, video games and, apparently, it’s the world’s most ‘liked’ vehicle on Facebook. Proof, perhaps, of the Mustang’s enduring appeal from one generation to the next, which as you’ll read later, plays a big part in its design.

I thought the last one was fantastic – the best yet in terms of dynamics – but according to Ed Krenz, Mustang chief nameplate engineer, “This [new one] is the most athletic and confidence-inspiring Mustang to drive yet. Whether driving an automatic or manual transmission, thanks to Drive Modes combined with fine-tuned digital engine, suspension and steering controls, we’re now able to give drivers peak performance everywhere, from their favourite roads to their local track.” Yee-haw to that.

At its heart remains the thumping V8. A new Gen IV 5.0-litre V8. It has twin air intakes leading to twin throttle bodies – in a move to reduce induction losses and improve the engine’s flow rate and response. There’s also a Dark Horse version, which has more power, unsurprisingly, thanks in part to different camshafts. It’s claimed to be the most track-focused Mustang ever, and will form the basis of the car’s motorsport programme that’ll include GT3, GT4 and NASCAR.

The Dark Horse model also has an exclusive six-speed Tremec transmission with a 3D-printed titanium ‘shift ball’ (yep, that’s a gear knob to you and me). The GT comes with a regular six-speed ‘box but both versions include rev matching. There’s also the option of Ford’s 10-speed automatic ‘box with shift paddles behind the steering wheel.

The steering wasn’t the outgoing car’s best feature – it was slow and had a lot of friction in the system. The new car has ‘reduced compliance from steering wheel to tyre’ and a quicker steering ratio. And a Performance Pack is standard on the GT. This includes 19-inch alloy wheels in a choice of designs, Brembo brakes with either red or black calipers, a limited-slip differential and a switchable exhaust. One of the options available is MagneRide. This is active suspension that ‘monitors conditions one thousand times per second and uses an electronically-controlled fluid to match damping resistance to the road conditions.’

MagneRide is standard on the Dark Horse. And as a pointer to this being more than just lightweight marketing, it also features a Torsen limited-slip differential with additional axle cooling, an auxiliary engine oil cooler, a transmission oil cooler (if you have the auto gearbox), and a lighter coolant radiator with greater heat soak rejection and more powerful fans. That’s not all, because the Dark Horse also comes beefed up for track use with a front strut brace and rear K-brace to benefit its bespoke chassis tuning, which includes a larger rear anti-roll bar and heavier-duty front dampers.

The wheels are also staggered front to back and fitted with Pirelli P Zero PZ4 rubber, beneath which are fixed-piston, Brembo front calipers and larger front discs. Additionally, there’s an electronic ‘drift brake’ with the new Mustang. This is said to provide ‘the visual appeal and functionality of a traditional, mechanical handbrake’ but helps novice drivers hone their drifting skills while providing ‘a competition-ready system’ for the experts.

You’ll be able to tell the Dark Horse apart from the GT by its darkened LED headlamps and high-gloss black grille with trapezoidal nostrils. And it comes with high-gloss ‘fangs’ on the lower edge of the front bumper, high-gloss side skirts and fixed rear wing. There’s also a unique race-inspired diffuser, punctuated by darkened quad exhausts. The Dark Horse carries a different logo as well. “This is the first time for Mustang that we’ve ever had a forward-facing horse,” said Joel Piaskowski, global director, Ford Design. “It’s aggressive, a bit sinister and it’s coming from the shadows head-on to win.” There’s an optional Appearance Package, too, which includes dark Notorious Blue Brembo brake calipers and a brighter Grabber Blue logo.

Don’t think the standard car will go under the radar, though. And it still carries those traditional Mustang styling cues, like the signature three-section bonnet, a sleek roofline, wide hips and a short rear overhang. The rear end also has ‘new, edgy, signature tri-bar lighting and redesigned diffuser for improved aerodynamic balance.’

It’s worth pointing out that each model will look slightly different, with the GT having larger grille openings for better airflow, along with modified bonnet vents and a different front splitter to the convertible. The drop-top comes with a fully lined fabric hood and one-touch activation, and it folds away leaving room for two golf bags in the boot.

What about inside? Well, we’ll let you judge the results for yourself from the pictures. This is what Ricardo Garcia, Ford interior design manager, had to say, “We knew what customers wanted and designed the most digital Mustang ever, while retaining the all-important driver-focused cockpit. Removing some of these physical buttons, such as radio and climate control, and integrating them into a digital display was popular in research with Millennials, Gen-Z and traditional Mustang drivers alike.” Really? Traditional Mustang drivers wanted to lose the buttons, did they? And if you’re one of those traditional owners, the news may be made worse when you discover that the Mustang’s traditional double-brow upper dashboard has gone, too. Sorry.

Instead, there’s ‘glass-clad open centre stack, packed with technology.’ Basically, it looks a bit like a rip-off of the latest BMW 3 Series, with a 12.4-inch digital instrument cluster flowing into a 13.2-inch SYNC 4 infotainment system behind the same piece of glass. And like BMW’s design, it’s angled towards the driver. The car’s setup is also displayed on the centre screen using ‘Unreal Engine’ 3D software – that’s a computer gaming engine that produces real-time renderings. The vehicle settings can be adjusted by swiping the graphic to rotate the car virtually. In another bit of potential bad news, there’s a B&O sound system. That’s not the bad bit, for it’s said to provide ‘crisp audio through 12 speakers and a subwoofer’. But also ‘Ford’s Electronic Sound Enhancement technology to amplify engine sounds directly into the cabin.’ Saints preserve us.

Anyway, those slight misgivings aside, there’s still plenty to get excited about when it comes to this seventh-generation ‘Stang. No word on price ahead of the reveal, but expect all that in short order – including availability in the UK.