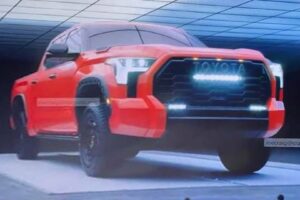 The Toyota Tundra is the Japanese automaker’s full-size offering for the US market. Since 2015, Toyota has offered a TRD Pro model to compete with the likes of the Ford F-150 Raptor and other sportier off-road offerings. A new model is in the works, likely featuring a V6 engine, and is set to be revealed in September for the 2022 model year. Now, leaked dealer photos have surfaced that appear to show the new Tundra in TRD Pro spec, according to reports from Pickup Truck Plus SUV Talk.

The truck features a tough stance, along with a big blacked-out grill and Toyota wordmark badge in a suitably large font. The tailgate doesn’t muck around either, and is stamped with “TRD PRO” branding. There are also orange clearance lights present on the front and rear, a design feature required for vehicles over 80″ wide. Given the existing Tundra comes in at 79.9″, it’s unsurprising that the new model in TRD Pro spec would be a touch over the limit. 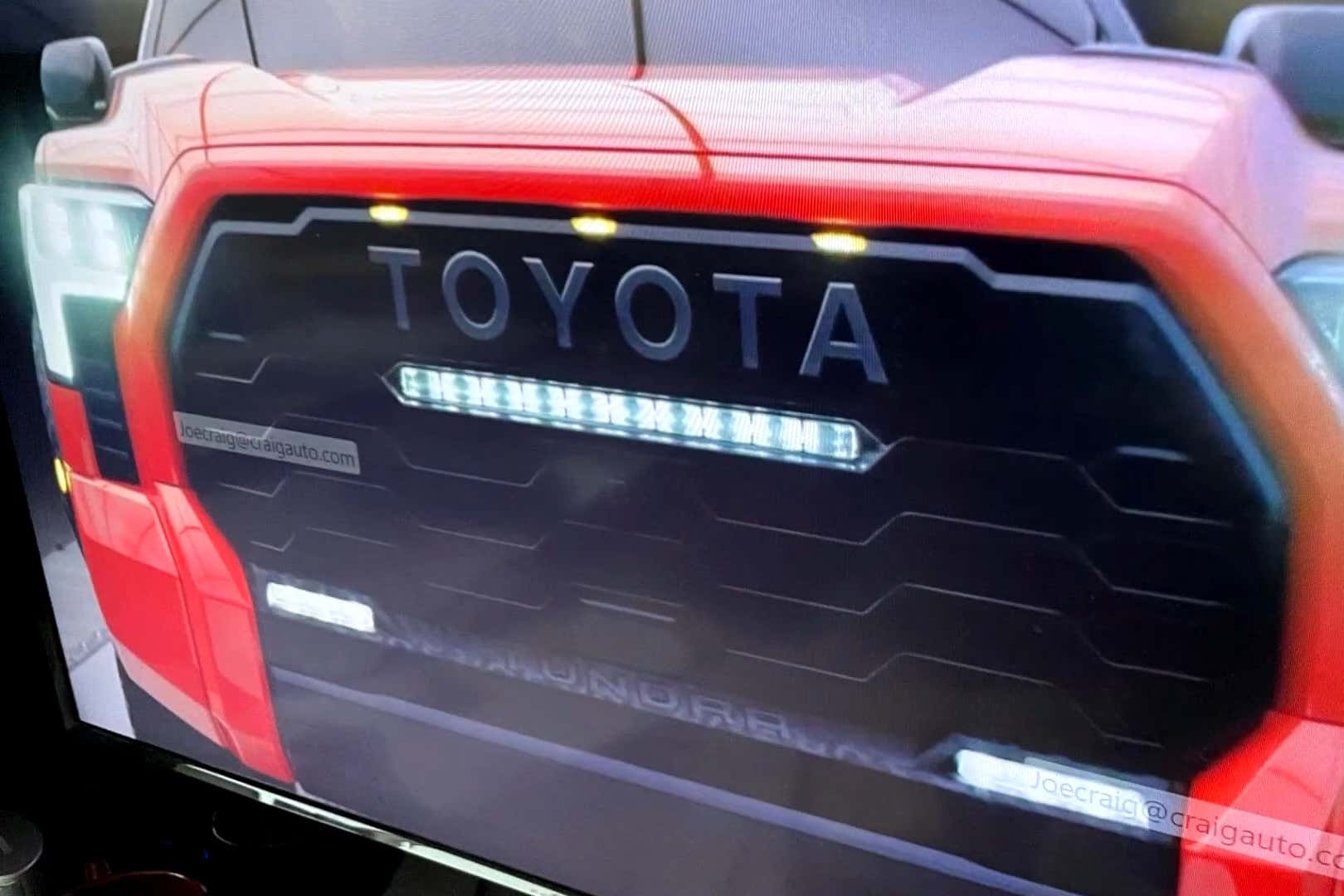 The side view shows the truck running on what appear to be a sleek set of black seven-spoke wheels. There’s also a visible rail which appears to be a rock slider to avoid damaging the sideskirts offroad. The outgoing TRD Pro was available in Double Cab or CrewMax layouts with a 6.5 ft or 5.5 ft bed respectively. The images leaked appear to show a layout similar to the outgoing CrewMax, presumably with a short bed. However, this isn’t to say a Double Cab version won’t be offered—these are simply the only images currently available at the time of writing. 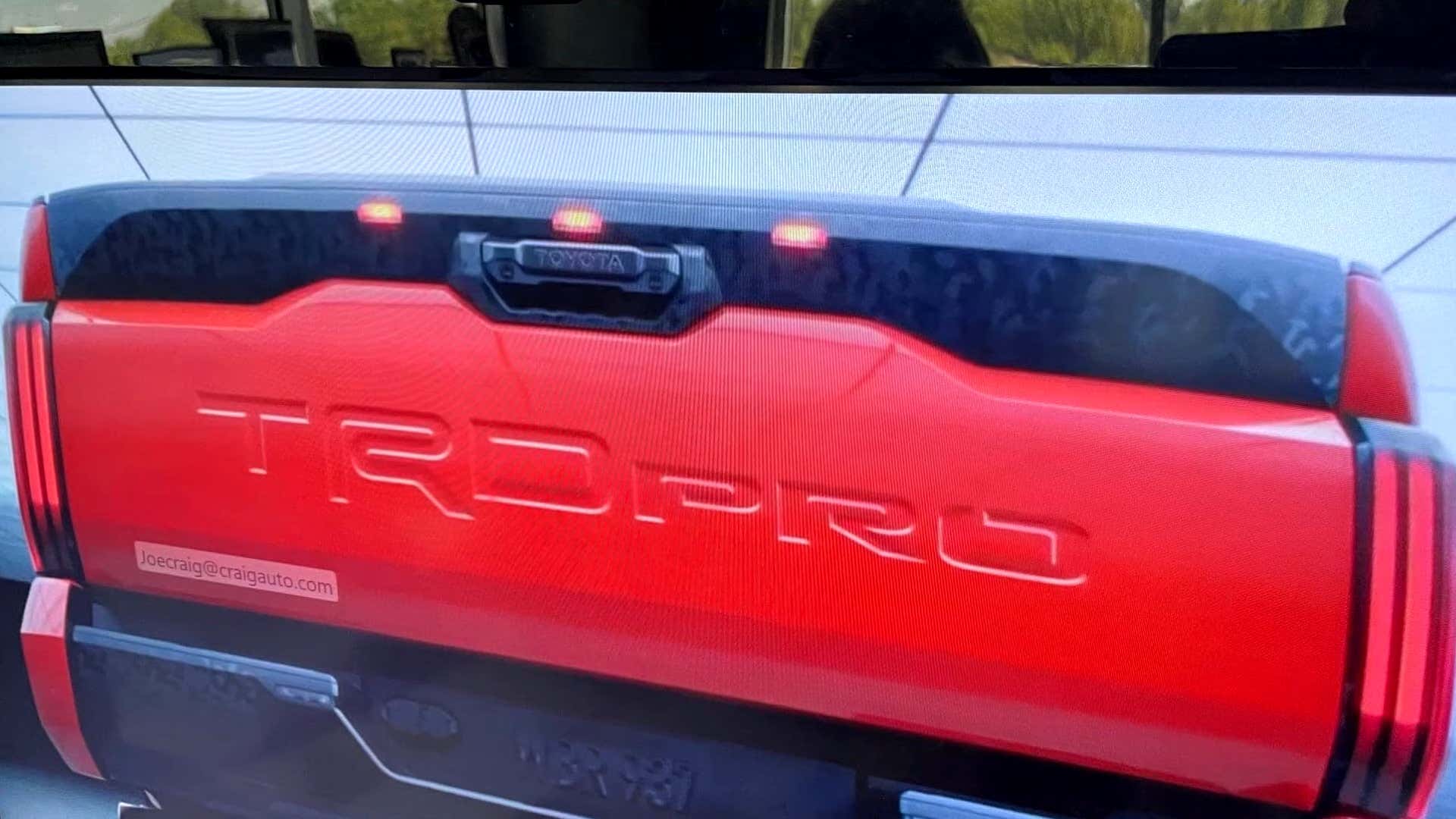 The design makes great use of the contrast between black trim on detail parts, and the searing paint scheme, which is either red or orange, depending on your opinion. We’ll have a firmer line on that once Toyota’s configurator launches and we get the official color names, of course. With that said, previous models have been available in a range of shades; what we’re seeing here is likely just the hero color. If what you see doesn’t strike your fancy, you should be able to spec something more to your own liking.

The LED lighting package up front matches the earlier, obscured photos that Toyota released of the 2022 truck, so these images are likely representative of the real deal. Adding further credibility is that some of the images are overlaid with an email address belonging to a Toyota dealer in Indiana. The leaked images were taken by photographing pictures of the Tundra on a monitor, which sports a sticker quoting a phone number for DealerSocket, a software package for auto dealers. This further suggests the leak may have occurred within the dealership itself.  The leaked pictures have been collated in a post on the Tundras.com forum if you wish to peruse them more closely. Meanwhile, we’ve reached out to the dealer for comment and will report back any findings.

The full reveal will come later this year, and at that time we’ll get all the details on engines, body configurations, and everything else under the skin of the new Tundra and TRD Pro. Until then, we’ll have to get by with what we can infer from some blurry shots someone snuck out of Indiana.