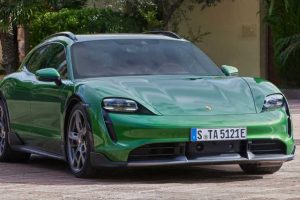 Despite the new Taycan Cross Turismo’s extra ride height, tough body cladding, mudguards, and generally off-road-ready looks, this isn’t some Dakar-ready Porsche EV. As cool as that would be, Porsche insists that the 2022 Taycan Cross Turismo is merely a more well-rounded version of the slinky Taycan sedan. The electric wagon also is better suited—even if only on paper, or in appearance—for those who live in temperamental climates or fancy themselves adventurous types. After all, the normal Taycan is available with all-wheel drive, meaning it could probably handle a snowy road just as well.

To that point, even though it may look different from (and some might say better than) the standard Taycan, Porsche says almost everything from the wagon’s beltline down (inside and out) is shared with the sedan. The only meaningful mechanical change comes in the form of newly standard air springs (which are optional on other Taycans). The calibration of the suspension and the rest of its physical components, however, is unchanged.

The aforementioned air springs are specific to the Cross Turismo and allow for more variation in ride height compared to the units available in the sedan. In its normal mode, the Taycan Cross Turismo rides an inch higher off the deck than its sedan counterpart but can be raised to as much as three inches higher (to its maximum ride height) for clearing larger obstacles. That mode, however, isn’t to be used at speed.

All Cross Turismo models get a panoramic glass roof, roof rails, and Porsche’s larger-capacity “Performance Battery Plus” as standard. The basic appearance matches that of the Mission E Cross Turismo concept (in the video above). Other Cross Turismo-exclusive goodies such as a custom bike rack and a roof-mounted cargo box will be optional extras. Sadly, there won’t be a power inverter on offer, so don’t expect to power any electric camping accessories with this off-road … erm, sorry, “all-rounder” Taycan.

How Off-Road Could You Go in a Taycan Cross Turismo?

If you wanted to tear down a dirt road in the Cross Turismo, there is a Gravel driving mode, where the Taycan’s stability control systems are backed off a bit and the computers try to equalize the speed of all four wheels, acting as a sort of virtual differential lock. Gravel mode also raises the suspension 0.4 inch higher than the normal modes do. Opt for the “off-road design pack,” however, and the Cross Turismo’s standard right height becomes that 0.4-inch-taller figure.

As if that weren’t enough adjustability, you can also slam the Cross Turismo into the pavement and bring it in line with the ride height of the standard Taycan. Interestingly, lowering the car is used for both the most restrained and the most aggressive modes. Both Range mode and Sport Plus will lower the Taycan for the sake of better aerodynamics (and better handling if you’re looking to dice up a twisty bit of mountain road).

Though the Taycan Cross Turismo hasn’t been rated by the EPA just yet, the powertrains (the batteries, the motors, the 800-volt architecture, and the two-speed gearbox) all carry over from the Taycan sedan. As a result, Porsche expects driving range figures for the Cross Turismo to be similar across both body styles. The wagon may suffer only a marginal range penalty because of its extra mass.

But that extra mass does come with something that might be worth the range tradeoff: more space inside. Because of the less-swoopy roofline, the Taycan Cross Turismo adds 0.4 inch of headroom up front and a whopping 3.6 inches of extra room for your dome in the rear seats. That should silence (or quiet) complaints regarding room on the rear bench. It also means more room for your junk.

Because the Cross Turismo is ostensibly a station wagon, there is considerably more cargo space. There is a maximum of 15.0 cubic feet of free air between the rear seats and the hatchback in 4 and 4S models, with that number shrinking to 14.3 cubes in the Turbo and Turbo S cars. With the rear seats folded down, cargo space swells to 42.8 cubic feet.

Those numbers will be different, ultimately, when the cargo space is rated by American standards. The Germans rate cargo space with the parcel shelf still in place, meaning the number of actual free space is typically larger using the American measurement parameters. That’s just more bang for your buck, really.

Speaking of bucks, Porsche is only announcing pricing of the base Cross Turismo 4 model at this time. The baby of the new Taycan Cross Turismo range will start at $92,250. That might sound like a huge jump from the base Taycan sedan (which starts at $81,250), but that car doesn’t have the air suspension, all-wheel drive, extra cargo room, Performance Battery Plus option, or the off-road chops of the Cross Turismo.

So not only is it the most practical Taycan on offer, but the new Cross Turismo might be the best value proposition, too. Porsche dealerships will start accepting deposits for the Taycan Cross Turismo immediately, with deliveries starting this summer.