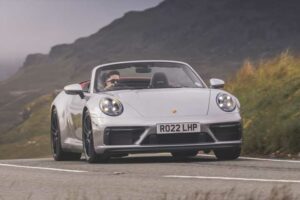 Suddenly in the mood for a convertible? Porsche has just the thing…

We know already how good the Porsche 911 Carrera GTS is. Of course we do. It’s seen off the Jaguar F-Type with a dispassionate ‘is that all ya got’ air and, while the test against the Audi R8 Performance RWD wasn’t quite so clear cut – it went against the GTS actually – that was as much to do with V10 fizz factor than any technical deficiency in the GTS format. So, what’s it like with a roof chop? Does it remain a pin-sharp effort with the added zest of open-topped fun? Is it a ‘have your cake and eat it’ car?

Well, it’s certainly your best bet if you want a GTS with a no-roof option. The GTS Targa is the other variant, but you have only to read the blurb to realise that’s nothing like as pure. For a start, it’s a default four-wheel-drive offering, which removes at least an ‘nth’ of the GTS’s dexterity while adding weight. It’s not the same package underneath, either. The Targa does without the GTS’s suspension settings that ape the GT3’s – no helper springs to be seen dangling around its rear multi-link arrangement and a boggo ride height to boot. The cabriolet, on the other hand, has the helper springs and a 10mm drop, just like the GTS coupé.

It also comes with rear-wheel drive and is available with a manual gearbox, although the one we’re testing has the eight-speed PDK. There’s still a penalty, of course, which is 100kg of added mass compared with the coupe and, inevitably, a loss of rigidity. How much of a loss? Do you really notice it? If so, is it balanced by the heightened summer fun?

Let’s begin with the ‘how much?’ and the ‘do you really notice?’ questions. If you’re today’s equivalent of an 80s yuppie – minus the Gordon Gekko braces but interested in looking flash with the driving finesse of an orangutan – probably not. It’s still capable and pretty stiff for a drop top. If you’re above primate levels of chassis sensitivity, there is some discernible shake, although it’s noticeable only over really rough surfaces. If the road is as corrugated as a barn roof you’ll feel it as slight tremors rising up the column and a shimmy at the top of the windscreen. Don’t go thinking the GTS Cab is a wobble board, though. It isn’t.

On top of the faintest of column shake there are other sensations in the steering. The good kind. The kind that draws a picture of the surface changes in your mind as you weave your way through the countryside. The steering’s rate of response and weighting is also your ally, because, despite the optional rear-wheel steering fitted to this test car, it’s intuitive to a tee.

Indeed, my main criticism – and it’s a fairly a nit-picking one – of the driving experience relates to the body control. It’s generally good but, like other 992 Carreras I’ve driven, the GTS Cab doesn’t feel faultlessly tied down. It has just a wee bit more heave and float than the GTS coupes I’ve tried, especially the rear-wheel-drive ones that have been more measured and precise. Whether that’s the cabriolet’s extra weight or compromises over its spring and damper rates, I know not, but it’s definitely a bit more plus or minus on that front. On a particularly challenging road you notice an extra bounce over a rise or through a compression, which may not be a confidence killer but it’s a confidence chiller when you’re going for it. And when you think how well the heavier Taycan GTS hides its bulk, you have to wonder why it’s the case. The good news is that when you pop the PASM into Sport – the firmer of its two modes – that relative looseness goes and the tight, GTS-style control returns.

The problem then is the ride. With speed in the car, it rides entirely on a par with how you’d expect a GTS to be: firm but fine. When the speed drops, though, and you’re mooching about in a battle-scarred urban environment – battle scared by our relentless war on tip-top infrastructure rather than actual bombs – it becomes quite punishing. Even when you drop the suspension back to Comfort it’s not exactly supple, but it’s okay.

One thing you cannot fault is the braking. Even with standard iron discs their power is mighty yet malleable. There is a few ‘mill’ of free movement at the top of the pedal but, beyond that, the pedal firms up and provides prodigious stopping power that’s so easy to meter. It makes leaning on the brakes a real joy.

So, there are differences between this and the coupe then, some to the detriment of the driving experience. But there are positives, too. The noise for a start. The engine’s yowl is at its flat-six best at low revs under a lighter load. This is when the 3.0-litre twin-turbo motor sounds its purest – and most reminiscent of the naturally aspirated engines of old. At the upper half of the rev range, with a boot full of throttle, there’s more resonance that, to a degree, sullies the tone.

To make the most of it you don’t need to be Professor Brian Cox to deduce that less resistance equals amplification. Ergo, when the roof is down there’s more noise, basically. More rasp from the twin tailpipes and more whooshes as well. You’re less aware of the turbocharged element of Carreras when there’s a sheet of tin above your head, but here, with the roof down, there’s no doubt this is a forced induction engine. You hear the compression building and then, if you lift off, a loud sneeze as the turbos dump their load behind your head. If you’re a fan of such theatrics, you will be a fan of this car.

One thing that seems undiminished by the opening roof is the speed. It is diminished, by the extra kilos of course, but if you can measure the point-two-of-a-second deficit from the driver’s seat then you’re a human V-Box and I salute you. It’s not just rapid during a full-bore assault but genetically torquey during the day-to-day stuff as well. Once the surge begins, which is at any point above 1,500rpm and just a light throttle, there’s truck-like pull. 2,500rpm is where the real action starts, though. From then on it’s too fast for most roads, and the seamlessness of the PDK only adds to that sensation. I have to say, I would choose the manual just for something a bit less clinical.

When it comes to the ‘convertiblely’ bit it’s fantastic. With everything down – the roof and the windows – at slower speeds you scoot around savouring the full sense of freedom without feeling like you’re locked in a wind tunnel. There’s more buffeting as the speed increases, naturally, but that’s fine: raise the windows and power up the wind deflector and you can cruise happily until your face has melted like wax in the sun. I am not the world’s biggest convertible lover, yet, on a gloriously sunny weekend, even I found myself circumcising the GTS at every available opportunity. A late evening blast back home from Hertfordshire, just as the temperature was dropping to a pleasant chill, was, quite frankly, sublime.

So, is the GTS sublime? Well, it’s hard to think of another convertible in the just-over-£100,000 bracket that would feel more rewarding for keener drivers than this. I’d suggest you’re into the territory of McLarens, Lamborghinis and Ferraris if you want something quantifiably better, and they don’t make anything this ‘affordable’. I did find myself thinking what’s the point of going for the most focused 911 this side of a GT3 and then blurring the experience a bit. It’s not burred by a huge amount, it has to be said, but it’s definitely not as sharp as the coupe and that makes the GTS Cabriolet a bit perplexing.

From that point of view, I wonder whether the standard Carrera 2 Cabriolet is, perhaps, the best open-topped 911: 95 per cent of the driving experience for £25,000 less. Cards on the table: I’ve not driven the 911 Carrera 2 Cabriolet. Therefore I say that more as a qualifier than an absolute zinger. Go test both, is what I suggest, to make sure that you’re getting the car that suits you best. Either way, you’ll be getting a great convertible, and, despite the ubiquity of 911s, an attention grabber, too. Maybe it was the combination of GT Silver with red roof, which does look sweet, but the number of people who came to admire it means that, if you are just interested in looking flash, it does that well, too.