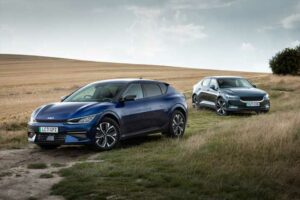 Entry-level used to mean buyer beware – but with pricey EVs, there's plenty to love at the bottom of the range

Once upon a time (not that long ago, in fact), getting the entry-level model of anything was undoubtedly the cheap ticket. Whether it was yours or the company’s money, it was easy to tell that the budget wasn’t generous: standard kit would be meagre, the engine weedy, the appearance apologetic. Everything about the start of the range seemingly existed only to compel you to opt for an upgrade.

That’s been turned on its head, broadly speaking, for EVs. No longer is it necessarily advisable to spend more on a more emotive or sharper engine, because the response will always be the same – you’ll just be travelling too fast even sooner. The very nature (not to mention the roads we typically drive on) of EVs makes even the lower-powered models always feel sprightlier than the number suggest. And more often than not you’ll get the functional benefits of carrying around a bit less weight compared to more powerful models, even if bigger battery packs can eke out further precious range. Furthermore, with the genre having already established itself as remarkably capable dynamically (dropping so much weight so low will do that) though not always that engaging, the idea of having just one driven axle isn’t necessarily a sacrifice. It might actually be a boon.

Both Kia EV6 and Polestar 2 have proven their worth already on PH with dual motor setups, the former having surpassed the Mustang Mach-E and the latter impressing in isolation. So here we have them with one electric motor and one driven axle each, 75kWh and front-drive in the Polestar against 77.4kWh with rear-wheel drive in the Kia. In fact, the 2 and EV6 are remarkably close on paper: they’re separated by just 2hp, 15lb ft, a single tenth to 62mph and nine kilos at the kerb. Even the price difference isn’t as gaping as you might imagine. Because, again, the entry-level has a way of doing that.

For those company car drivers that don’t want the obvious German (or American) electric cars, Kia and Polestar undoubtedly represent intriguing alternatives. For enthusiasts, too, it’s worth bearing in mind that the EV6 will soon get a 585hp GT flagship (with Drift Mode) and that there’s been sufficient interest in the 475hp 2 BST 270 (definitely a car, not a timepiece) for Polestar to refuse any more expression of interest for UK customers. There’s more to both than just miles per kilowatt hour, certainly.

There’s yet to be a situation or specification that doesn’t suit the Polestar 2. Strictly speaking, this car should be on 19-inch wheels instead of the optional 20s, but that seems unlikely to make much difference to an arresting first impression. Without conforming to the strictures of any particular genre (is it a saloon? Is it a crossover? What’s the right acronym to use?) it looks great, lacking much by way of adornment yet with an identity of its own. Even though it’s been on sale a little while, the Polestar 2 still draws admiring glances. And the light bar remains great.

It’s hard to imagine time and familiarity doing much to make the EV6 more charming, even if it too does have a very pleasing light bar. Bless it, the poor thing is just a bit odd, as seems to be the Kia style at the moment. To these eyes, the front end looks a bit pinched and small for the vastness of car that comes after, and the whole thing is just very… busy. It’s unmistakable, for sure, and Kia probably deserves credit for that. But the Polestar proves that a distinct design identity is possible without doing seemingly all the styling at once. Like the 2, it’s hard to classify the EV6 as one thing or the other; too big for a conventional hatch without convincingly crossing into SUV either. Just the Kia straddles genres a lot more strangely than the Polestar does.

The advantage of a curious shape – look how much car is between the wheels – is that the EV6 is genuinely vast inside. As a family car, the Kia has the Polestar licked, with more room for occupants and their things, plus a flat floor to really make it feel like an actual living space rather than a mere car interior. The EV6’s screens are slick, too, as is the interface below the hazard lights that can seamlessly switch between ventilation and an infotainment menu. The Polestar isn’t anywhere near as spacious, but is more traditionally inviting, dropping the driver down and wrapping the dash around them rather than placing them in control of a mobile office. That said, Kia should be praised for putting key features – drive mode and regen strength – on the steering wheel rather than in a touchscreen menu as the Polestar does. Because that’s better.

On the road, the Kia continues to defy expectations. Present most people with a car that looks like this and tell them it weighs two tonnes and they’d have a preconception about how it would drive. And it’d be nothing like the reality. If not an outright thriller, it’s also not hard to see how the flagship GT is already being compared with the Porsche Taycan. There’s a polish and precision to everything the EV6 does, from perfectly judged regenerative braking (in any mode) to faithful steering and a plush ride that isn’t at the expense of body control. It leans, certainly, but never unnervingly so. The Kia is impressive in a way that few large, mainstream cars are, because there’s nothing to take issue with. It all just works, to a very high level. If the transition to EVs seems daunting to most, the fact that the EV6 is so easy yet satisfying to use will put many minds at rest.

It sets a bar that the Polestar can’t quite match. Though the driver immediately feels more a part of the action with a better driving position and weightier steering, there just isn’t the same cohesion and finesse to the way the 2 drives. Without the option of the Ohlins dampers that dual motor customers can pay for, there’s a fidgety edge to the Polestars ride on the standard suspension. It might be that the smaller 19-inch wheel helps with the sometimes unrelenting secondary response, but the restlessness – particularly at low speeds – is frustrating, and jars with what is such a refined, soothing car otherwise.

Despite a mere 9kg separating them officially, the 2 feels the heavier car in corners as well. Despite combating lean more intently, it’s not necessarily more willing to change direction, as if the weight is situated higher up than the Kia – and there’s some unwelcome fight from the front wheels if the throttle is applied too early in the bend. Some might say that’s not a concern, really, but a bit of torque steer is acceptable in a small, flighty, agile hot hatch. It doesn’t really seem fitting in a £50k luxury EV, especially when its rear-wheel drive rival corners more satisfyingly. The Kia isn’t even out of its depth when the driven wheels are overspeeding – that Drift Mode for the GT doesn’t seem such a daft idea after a few miles driving the version with 350hp less.

The respective platforms must surely play a significant part in the differences. The 2 is built off the Volvo/Geely CMA architecture, which debuted five years ago with the XC40 – it’s not a dedicated electric toolkit, basically, having also underpinned ICE-engined cars and PHEVs. It doesn’t seem fair to call the 2 compromised, as it’s far too accomplished and likeable for that, but there doesn’t seem any question that the package could be advanced.

The Kia sits on the Electric Global Modular Platform that Hyundai put into production last year and is EV-only. Beyond the on-paper benefits (it can charge at 350kW against the Polestar’s 150kW, for example) are those brought to bear in this test. This is a slightly larger (74mm longer, 21mm wider, 71mm taller) car that’s much bigger inside and clearly superior when it comes to ride comfort. Moreover, while discussion of the relative performance is rendered somewhat irrelevant by the functional similarity of single-speed electric motors – and you’re unlikely to ever risk V-maxing either car between charging stations – it’s worth noting that the EV6 doesn’t run out of puff till 114mph, compared with 99mph for the 2.

All of that seems odd to point out for those of us who can remember Polestar as an all-conquering touring car team and Kia as churning out very ordinary runabouts, but such is the topsy turvy world of the EV. Tradition and reputation count for very little; the benefits of dedicated architecture matter far more. Those charging numbers might not mean much to those more familiar with octane ratings, but less time spent in UK services must be a good thing. The EV6 was easily and immediately drawing 175kW from the Applegreen chargers at South Mimms, theoretically only half its maximum, meaning a splash and dash really can add some meaningful miles; the 2 will never be able to absorb more than 150kW, even if it’s also a cinch to hook up. Which is still pretty fast when something like a Jaguar I-Pace is rated at 110kW, and won’t make a huge difference to long journey times, but as more chargers like Ionity’s 350kW stations pop up, so the appeal of a car equipped to take full advantage increases.

The dream scenario here would be a car that looks like the Polestar and drives like the EV6. An interior that combines the space of the Kia with the Scandi-cool of the 2 would be pretty much perfect, too. But that car doesn’t exist. It’d be a formidable thing if it did, however, because despite a clear winner here there’s plenty to recommend both. Even if it’s easy to imagine some dismissing the EV6 purely on the grounds of its bizarre appearance.

The Polestar feels to suffer most for its entry-level billing, put most simply; the slight advantage in range and cost over the dual-motor are outweighed by the dynamic penalty that front-wheel drive imposes. Whereas the Kia, despite just 229hp shifting so much weight, feels complete enough to question the need for any more EV6 – even those that’ll come with a Drift Mode. Maybe it’s not sexy or spectacularly fast, but as proof of what can already be achieved with an electric vehicle, there isn’t much better.