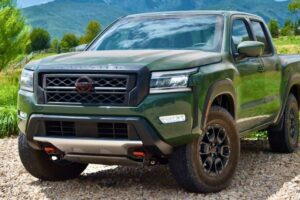 Even in the last-gen Nissan Frontier’s later years, owners stayed loyal to their trucks, praising its reliability, small dimensions, and old-school driving dynamics. Eventually, though, these stopped being enough to make up for just how dated the Frontier had become. Nissan needed a redesign, but without much cash on hand it couldn’t start from the ground up. What it aimed to do instead was extensively reengineer the Frontier with the goal of bringing it up to date, but without losing the traits that made the old one age well. Against all odds—at least from what I could tell over a couple of days of testing in the Colorado Rockies last month—Nissan has succeeded with the 2022 Nissan Frontier.

It wasn’t designed on a clean slate, but it wasn’t built on a messy one either, and as a result is a more capable, more refined truck. It’s technologically modern in the ways it should be, but still drives in a satisfyingly analog fashion that’s only getting rarer and more special as time goes on. 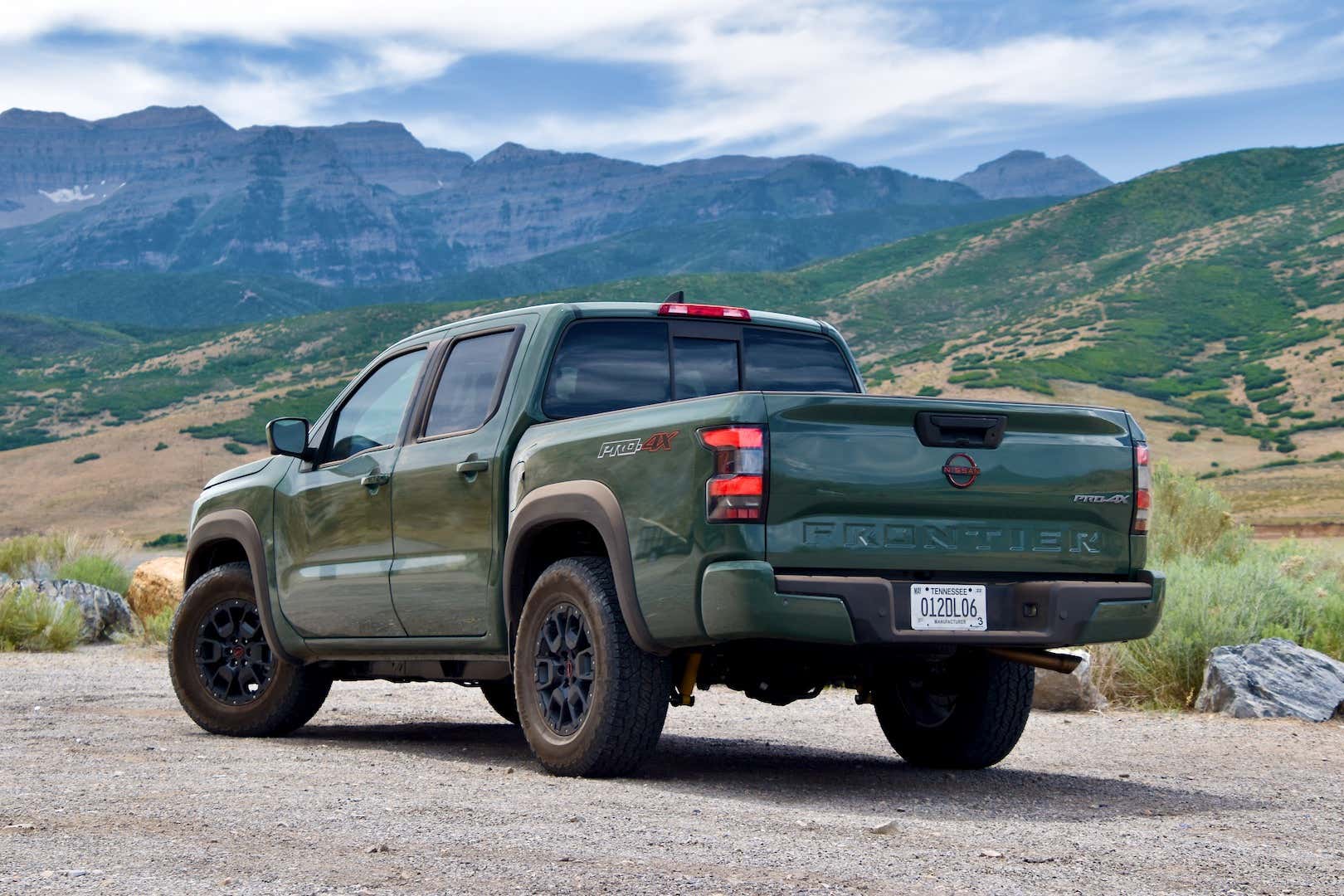 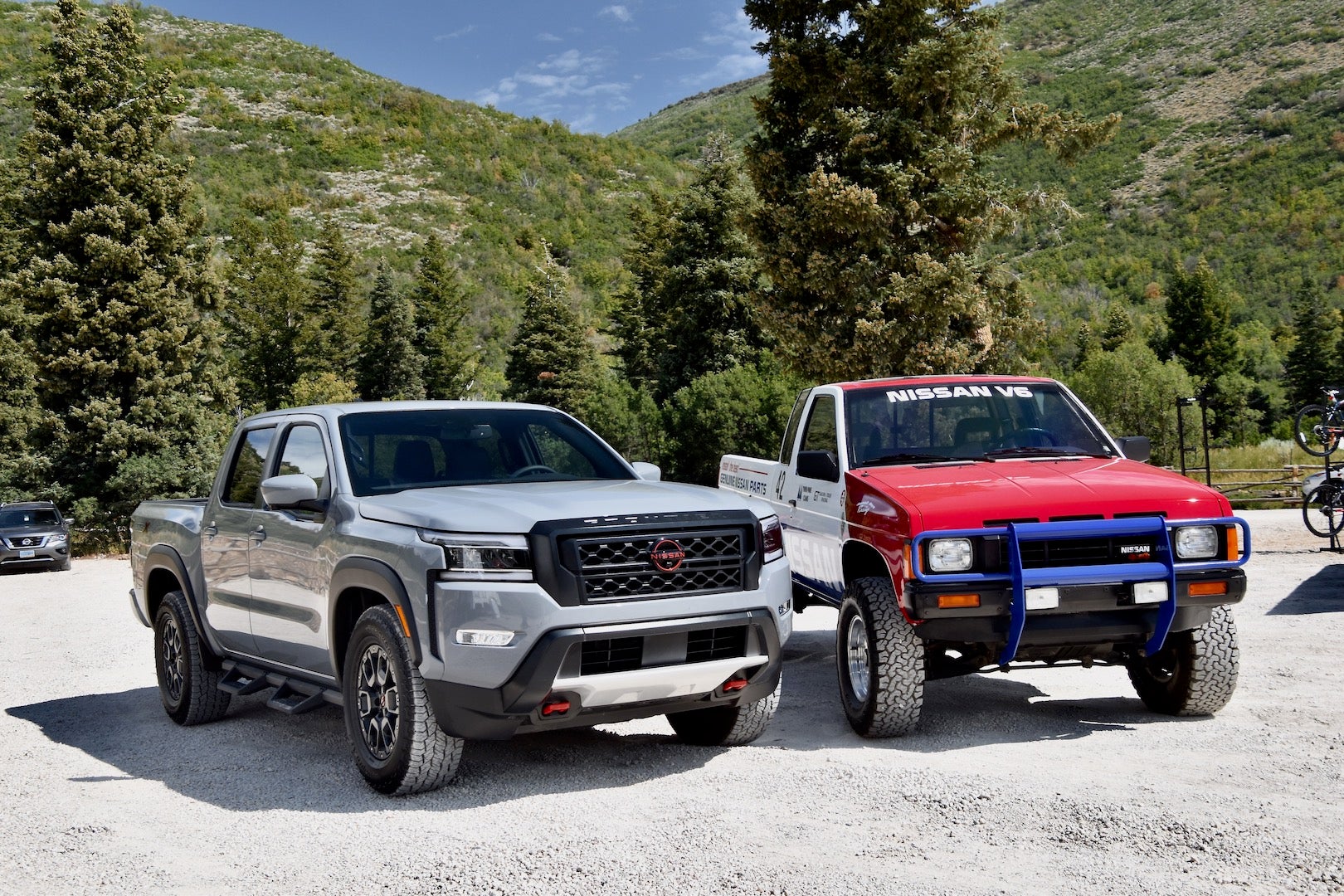 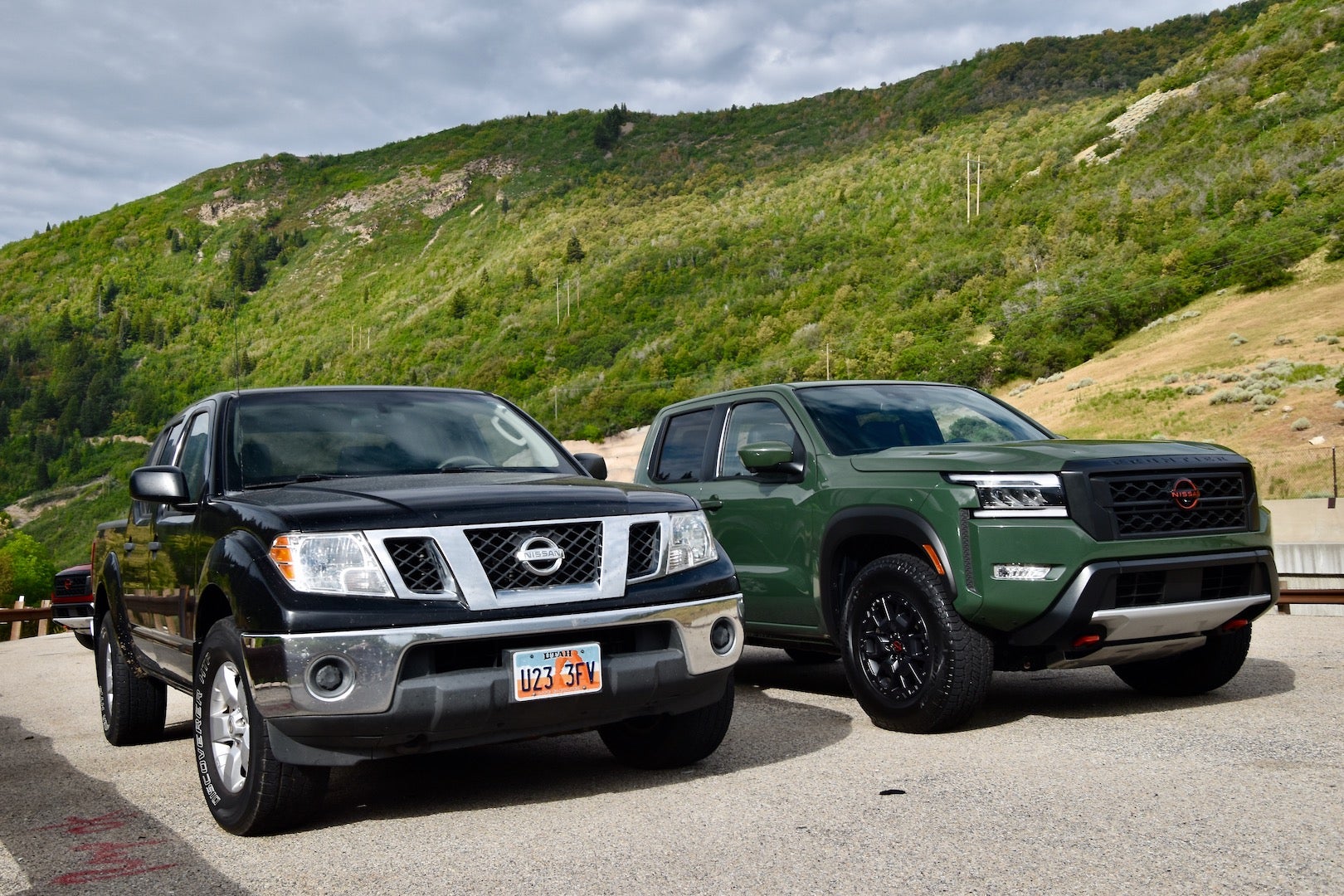 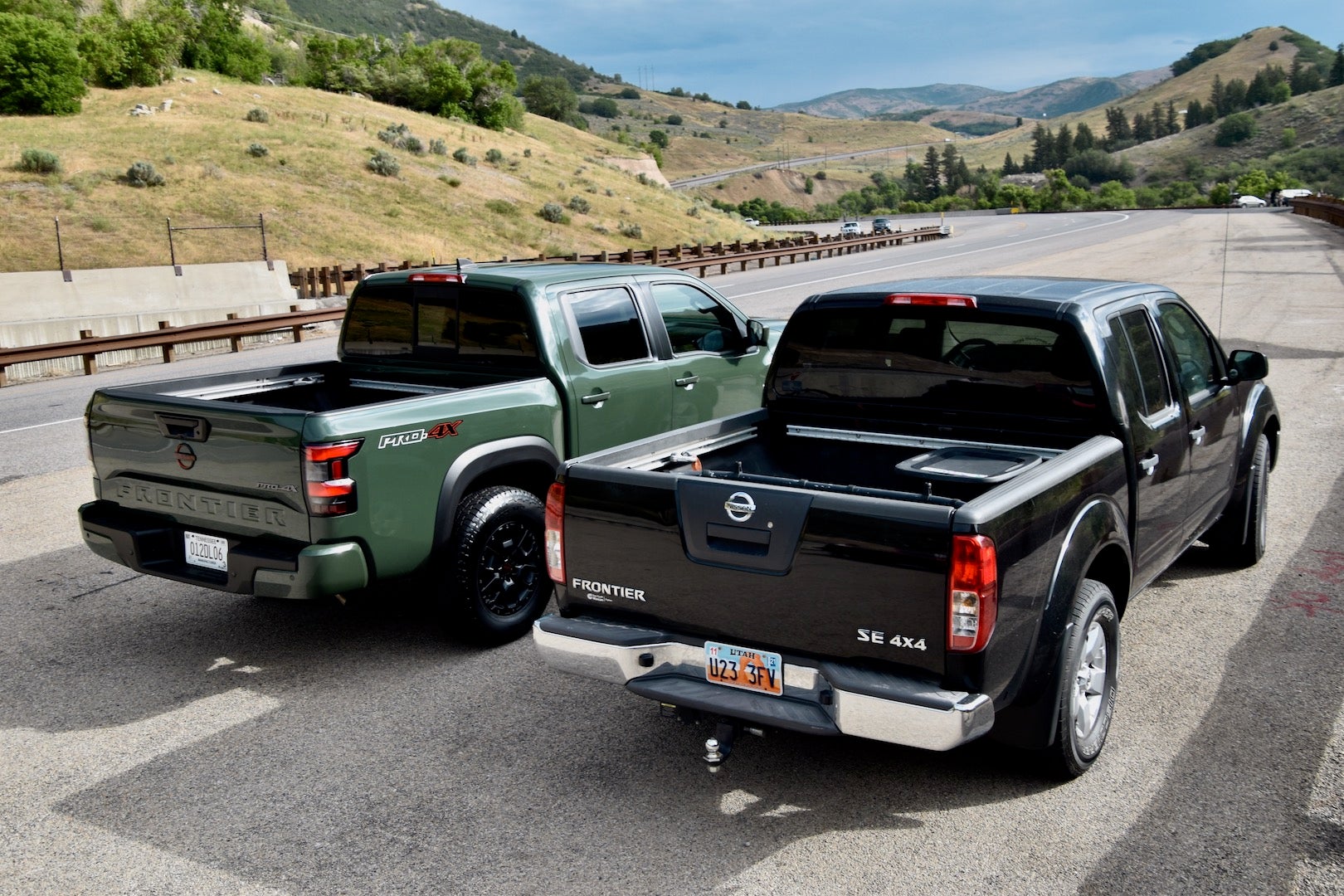 If It Ain’t Broke…

The new Nissan Frontier is the same truck as the old one in the way an ostrich is a velociraptor: Their X-rays might look similar, but they’re completely different animals. Like its ancestor, the 2022 model is a midsize pickup with extended (“King”) and crew cabs, with standard bed sizes of six and five feet respectively (though the six-footer’s available on both). The skin’s been restyled to make the truck look like it’s been carved from a solid block a la the ’80s Nissan Hardbody—almost monolithic—with retro box flare-style fenders grafted on to widen its stance.

It culminates in a design that, while faintly resembling the Honda Element and Land Rover Freelander up front, and echoing Ford’s last-gen F-150 in the taillights, looks distinctly more contemporary than any other midsizer. Above all, the 2022 Frontier is handsome, from base trim to the more expressive Pro-4X. 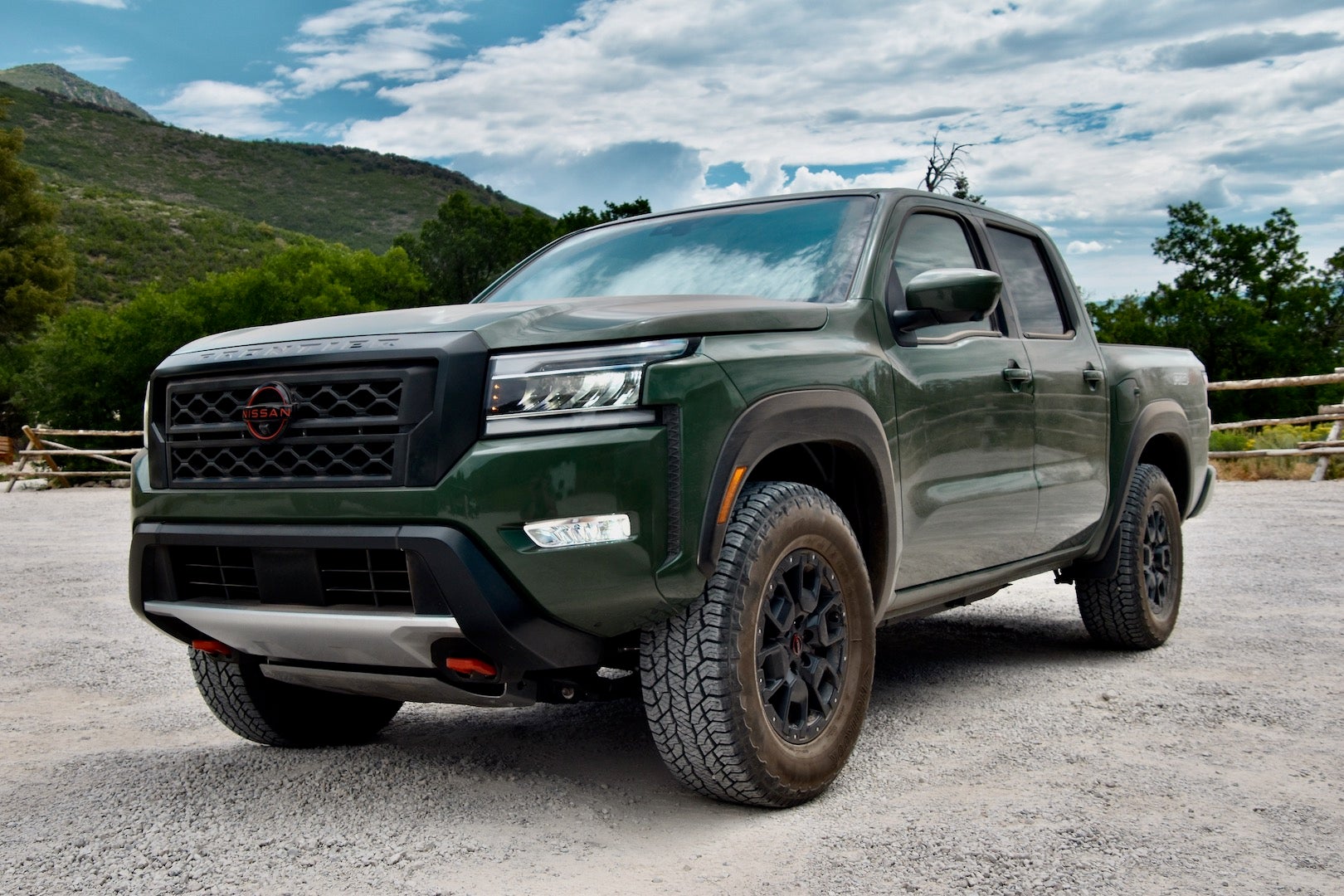 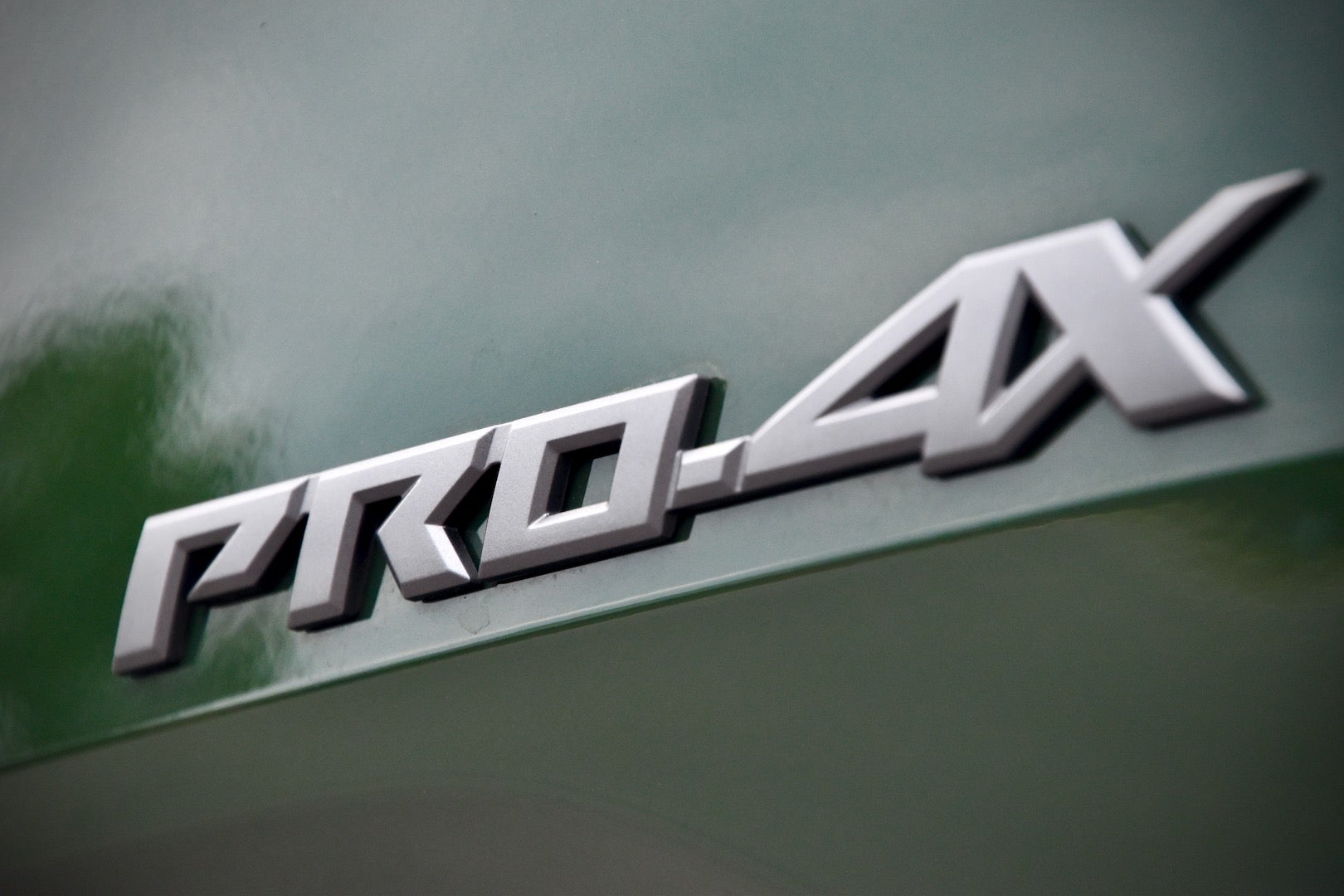 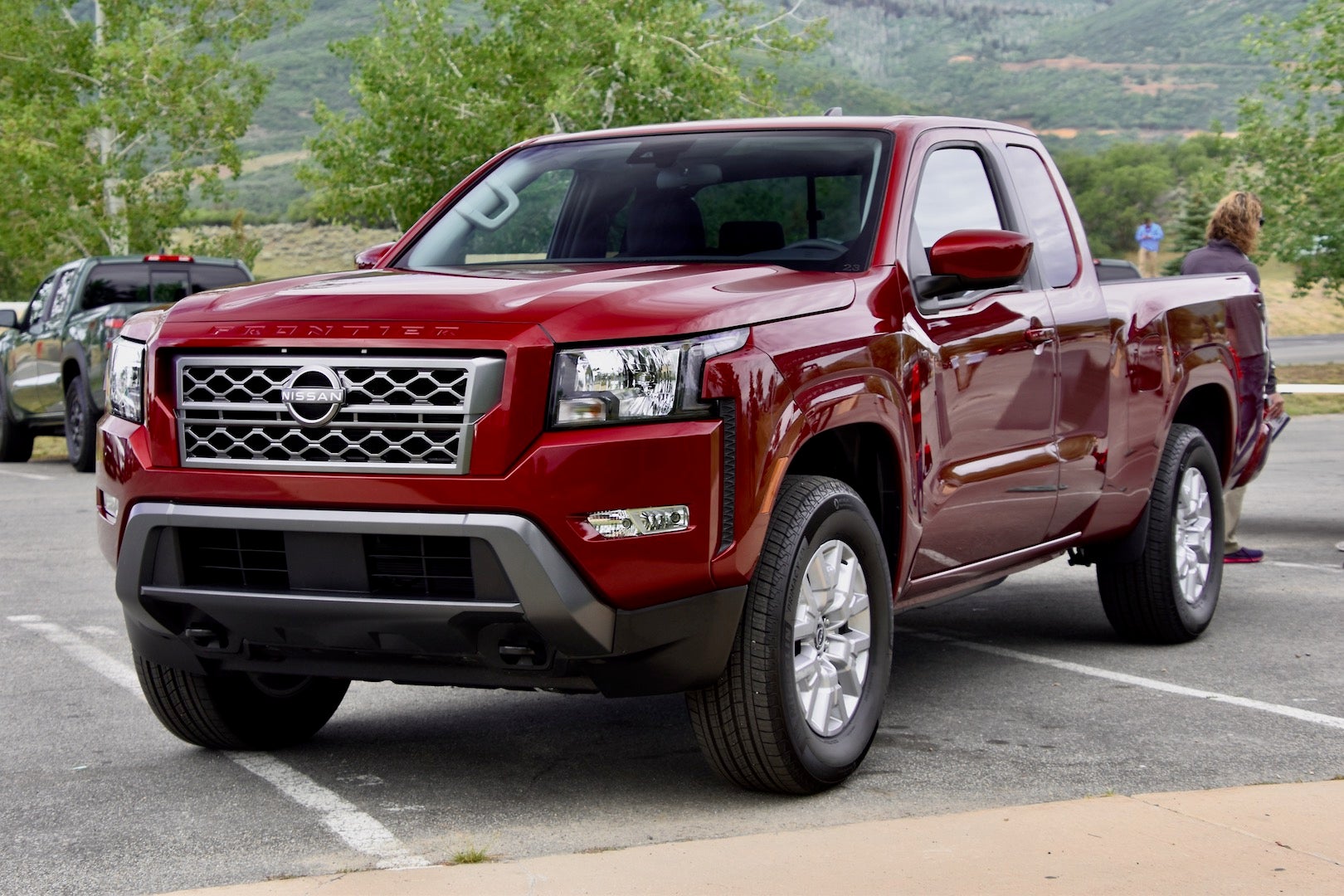 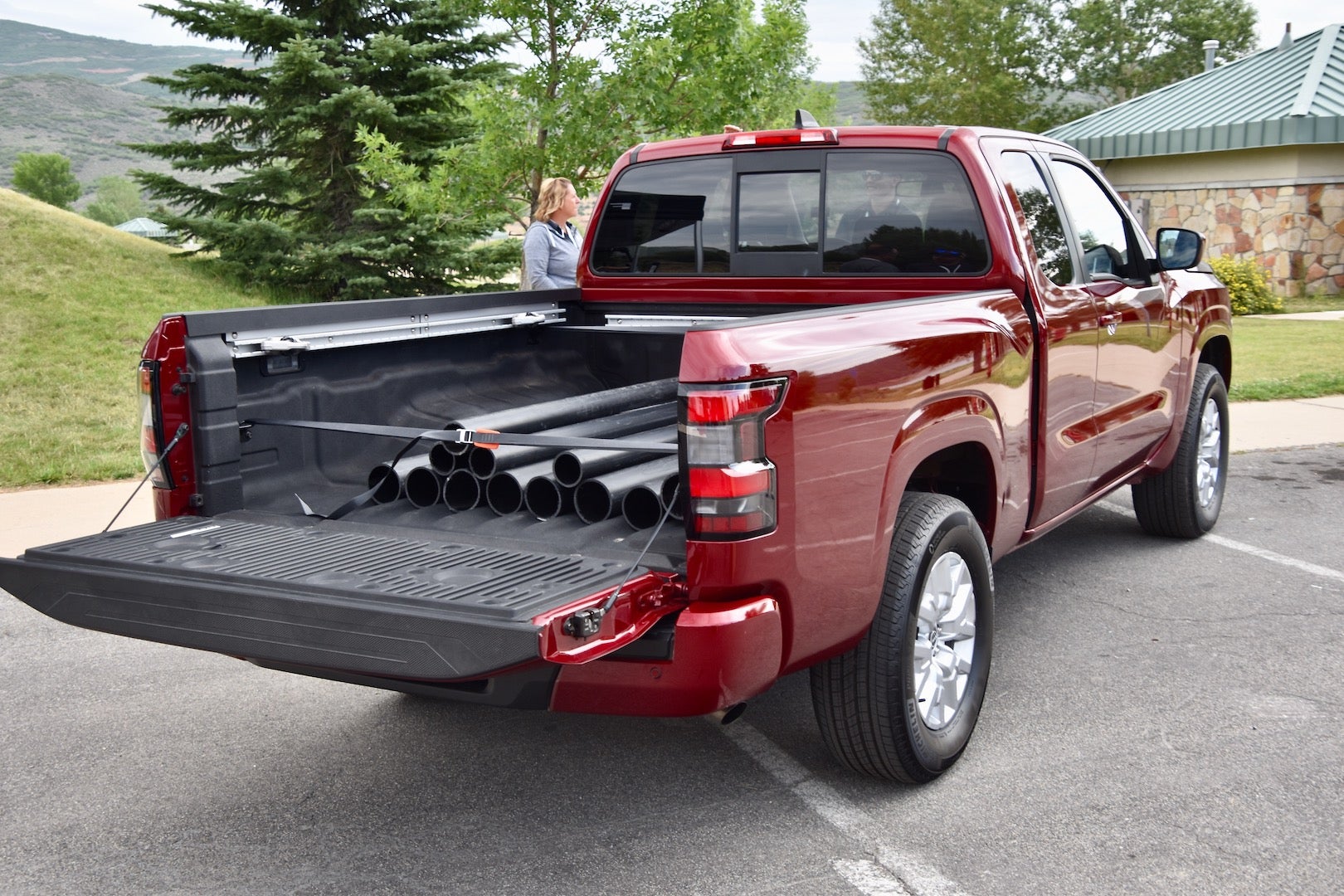 Today’s truck has a redesigned, stiffer frame to take advantage of reformulated suspension and a punchier drivetrain, making it drive like it looks—a product of the 2020s that hasn’t forgotten its roots. Under its skin are urethane jounce bumpers to absorb impacts and increase off-road durability, which is apparently not compromised by the addition of a rear sway bar and the stiffening of the front. There, an extra steering damper protects against wristy-breaky moments, while the rack itself—still hydraulic, but with quicker gearing—sharpens road feedback and handling.

Hydraulic cab mounts contribute to an interior that’s five decibels quieter by reducing vibrations by 80 percent, most of them presumably from the standard 3.8-liter V6. Previewed in the 2020 model, which shelved the four-cylinder option entirely, this V6 provides the biggest stable of any midsize truck, with 310 horsepower, and plenty of torque, with 281 pound-feet. Both pull harder than the Frontier’s Japanese rivals, though the Big Three’s best still out-torque it.

Even so, it’s a competitive tow rig, with a 6,720-pound maximum capacity, coming in a narrow third behind the Toyota Tacoma’s maximum of 6,800 pounds and the Chevy Colorado-slash-GMC Canyon’s 7,700. Its combination of standard trailer sway control and a new nine-speed automatic transmission with a 99 broader gear range bolsters its case, if not so much the fuel economy, which falls marginally short of the Tacoma’s at 19 combined. Toyota also, it must be said, still offers a manual. While not ideal for towing, having one here might complement some of the Frontier’s other strengths—more on those further down.

The Frontier’s interior feels the most modern of any midsize truck, with a design bearing zero resemblance to the last model, and build quality about as solid as the Tacoma’s, plus slicker finish. It’s the only up-to-date interior in its segment, and it compels its competitors to catch up, despite not hopping on every one of the 2020s’ design trends without a second thought. Low-res screens haven’t replaced the analog tachometers, and as its beltline isn’t much higher than the old truck, visibility remains a strong suit, making the Frontier a breeze to maneuver. 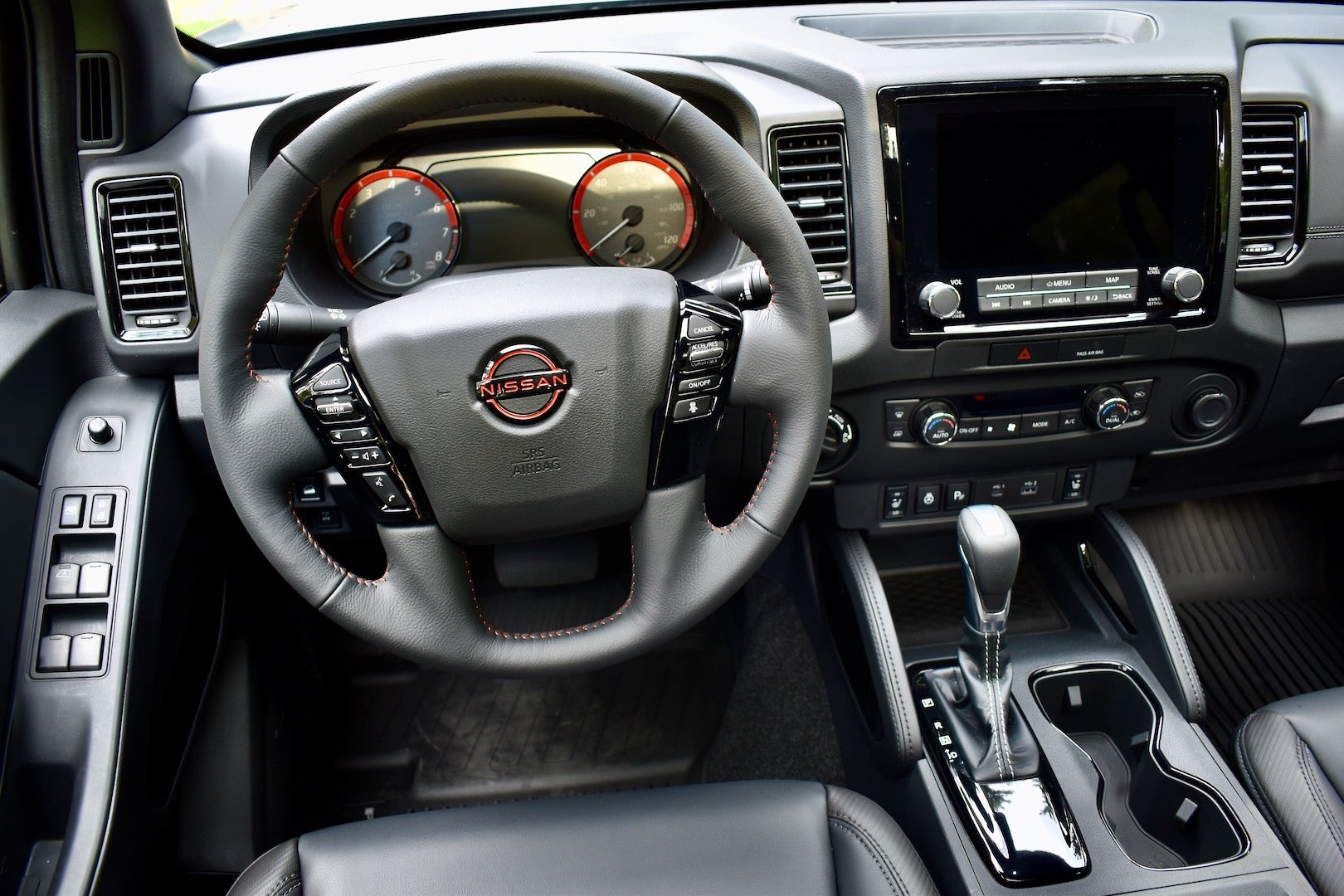 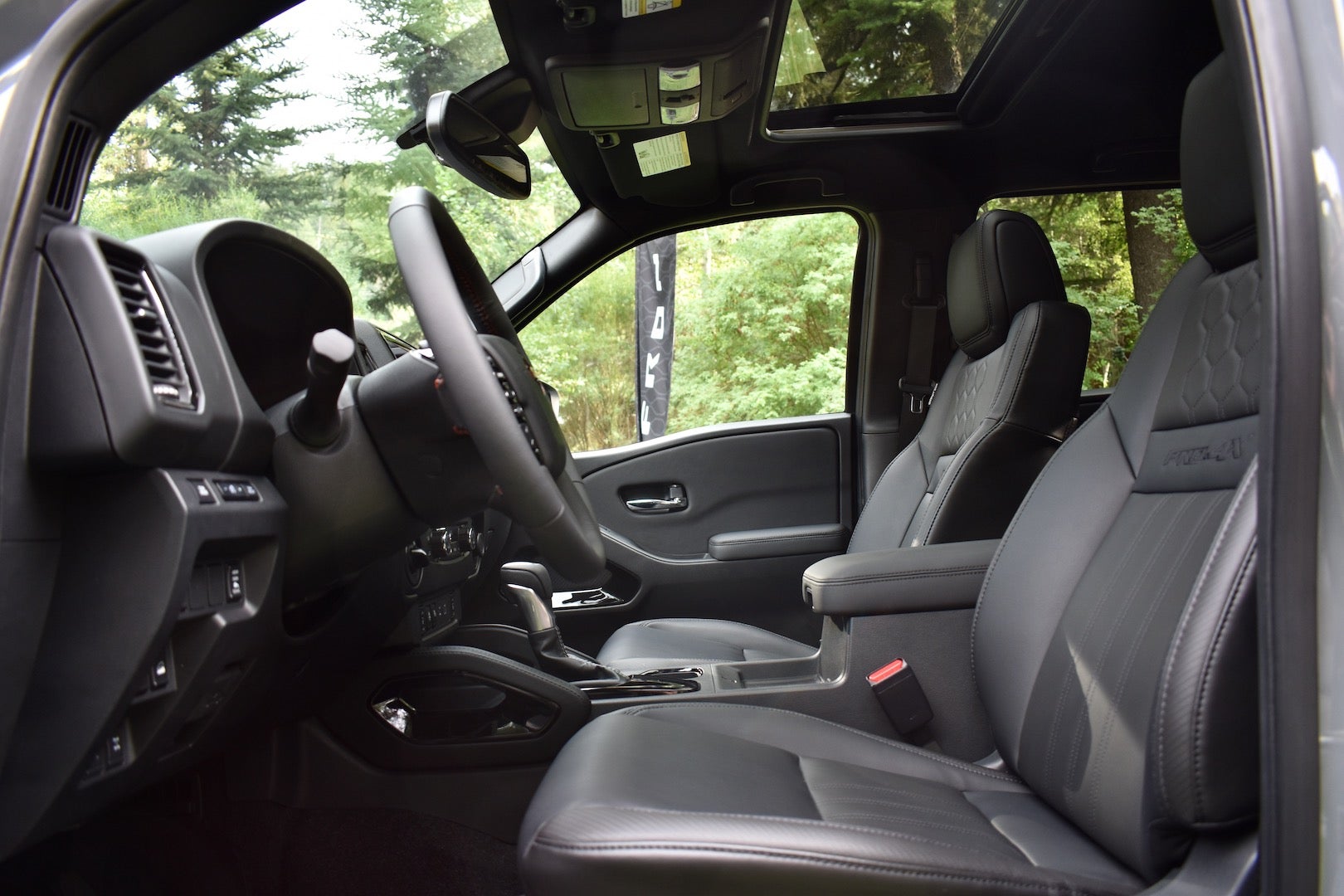 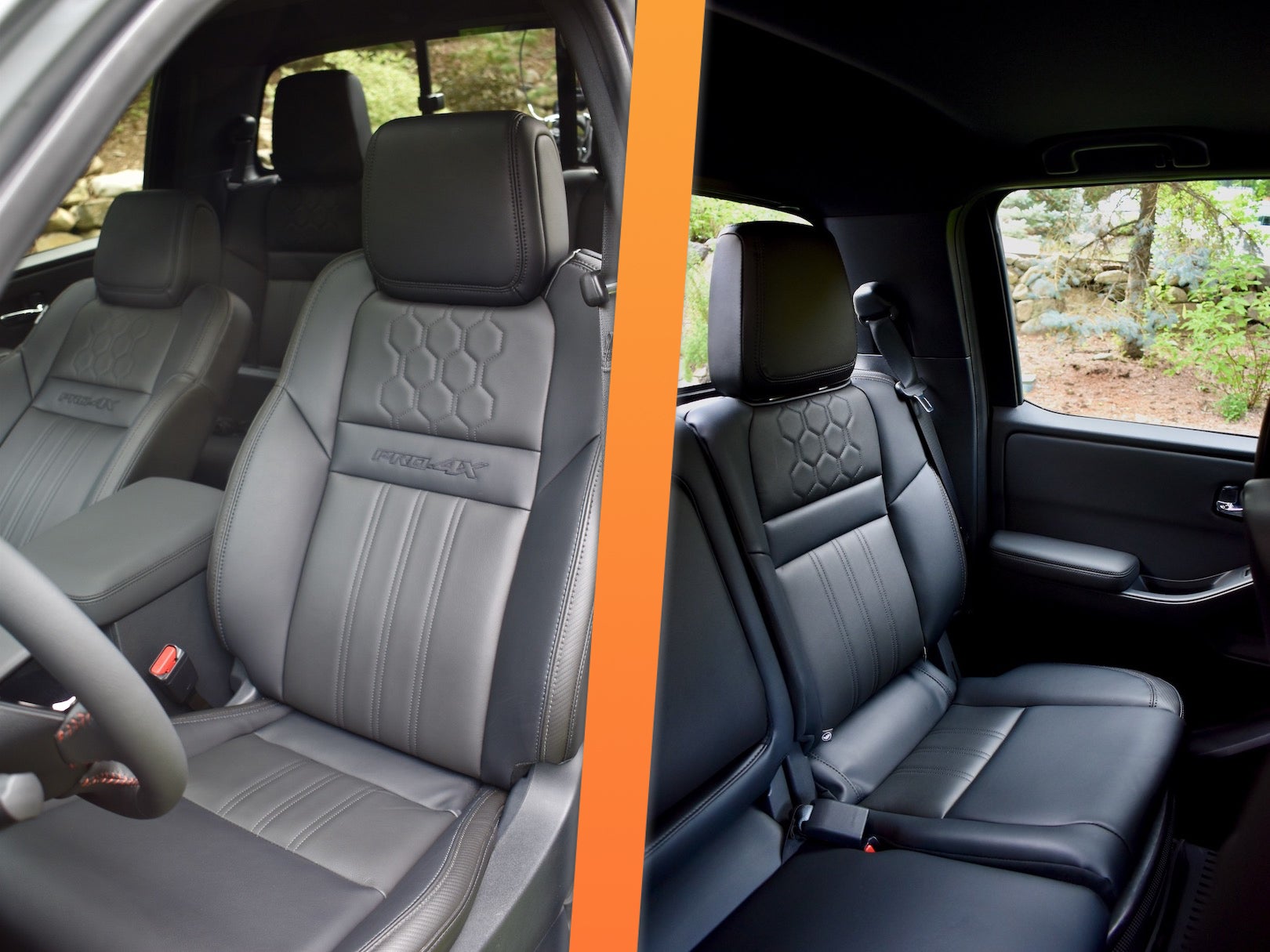 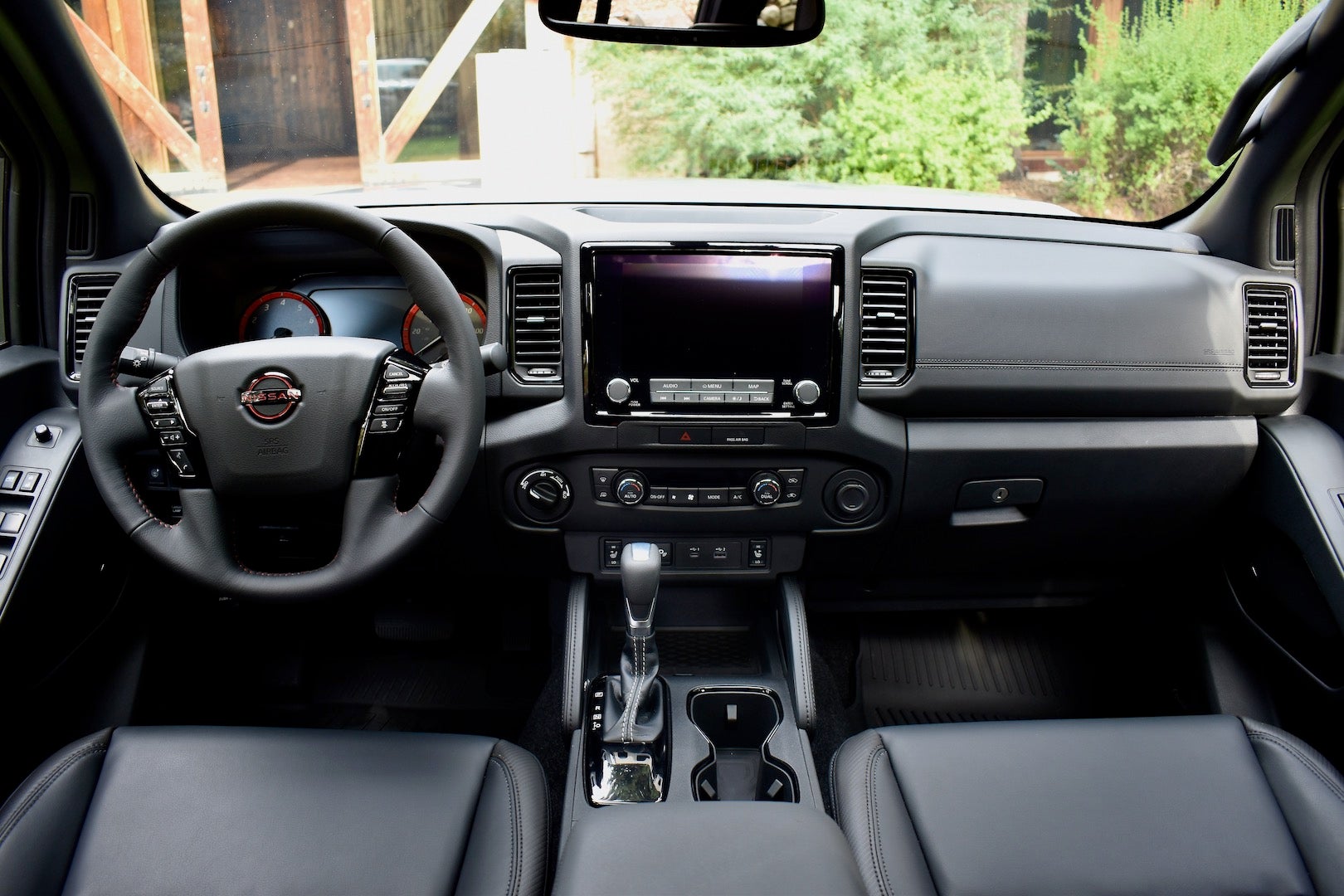 Being on the narrow end of midsize pickups, elbow room’s only average, though head and legroom are ample, as is space for belongings; the cupholders are numerous and huge, there’s a gaping four-liter center console, and second-row under-seat storage in both king and crew cabs. Most adults will only find themselves comfortable for long periods in the latter, with its 33.2 inches of legroom to the former’s 26.2.

It’s technologically up to speed, too, with a standard seven-inch—optionally nine-inch—infotainment touchscreen, compatible with Apple CarPlay and Android Auto, and accompanied by an optional wireless charging pad and 10-speaker Fender audio suite. LEDs are standard in the taillights and available in the DRLs and headlights, and all Frontiers come with Nissan’s Safety Shield 360 ADAS—that’s automatic high beams and emergency braking, blind-spot monitoring, lane-departure warning, and rear cross-traffic watch. There’s driver alertness monitoring, a handy engineered rear door alert, and class-exclusive frontal collision warning, plus available rear sonar and sign recognition—another exclusive. Adaptive cruise control is also an option, though it’s a standard feature on the Tacoma. 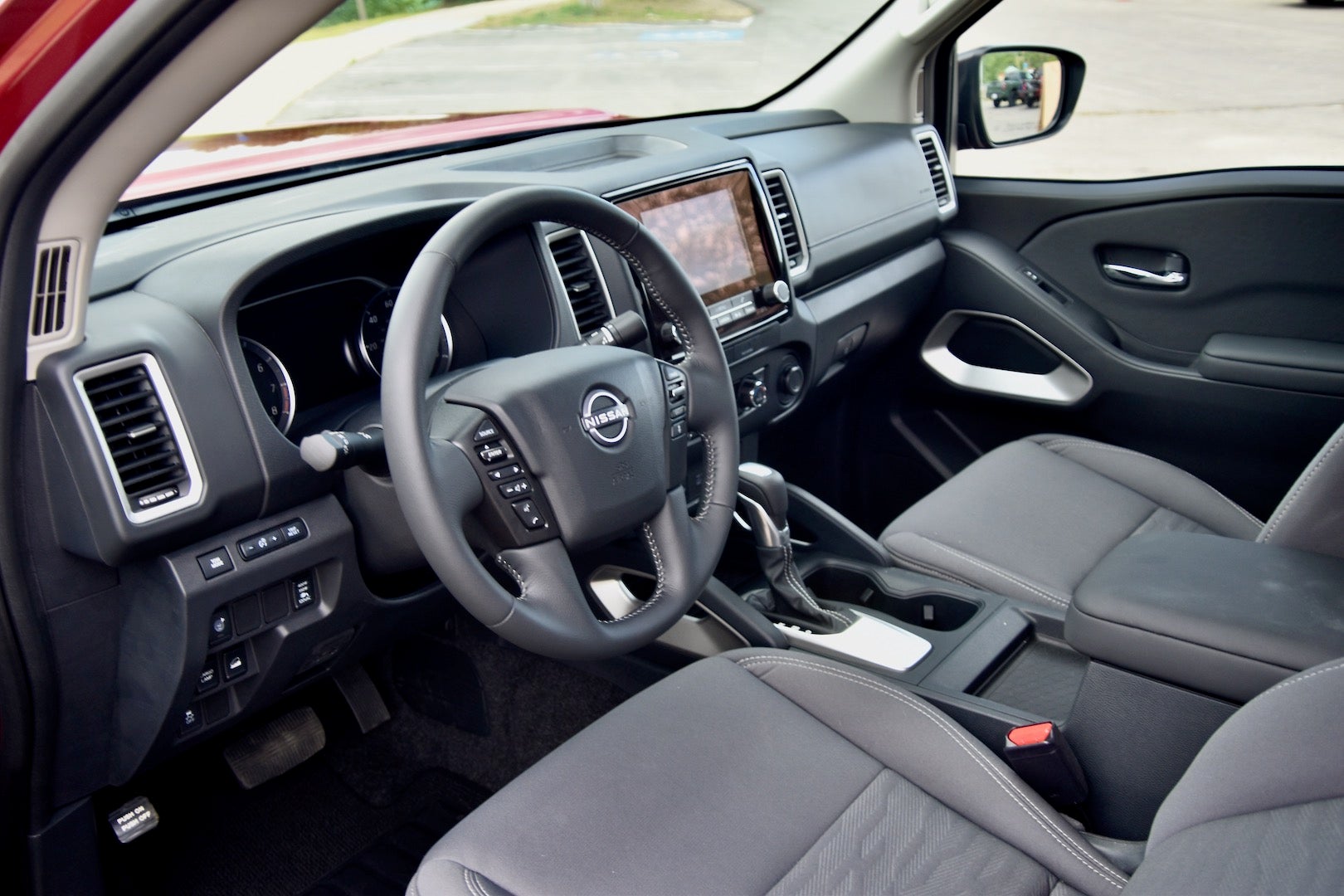 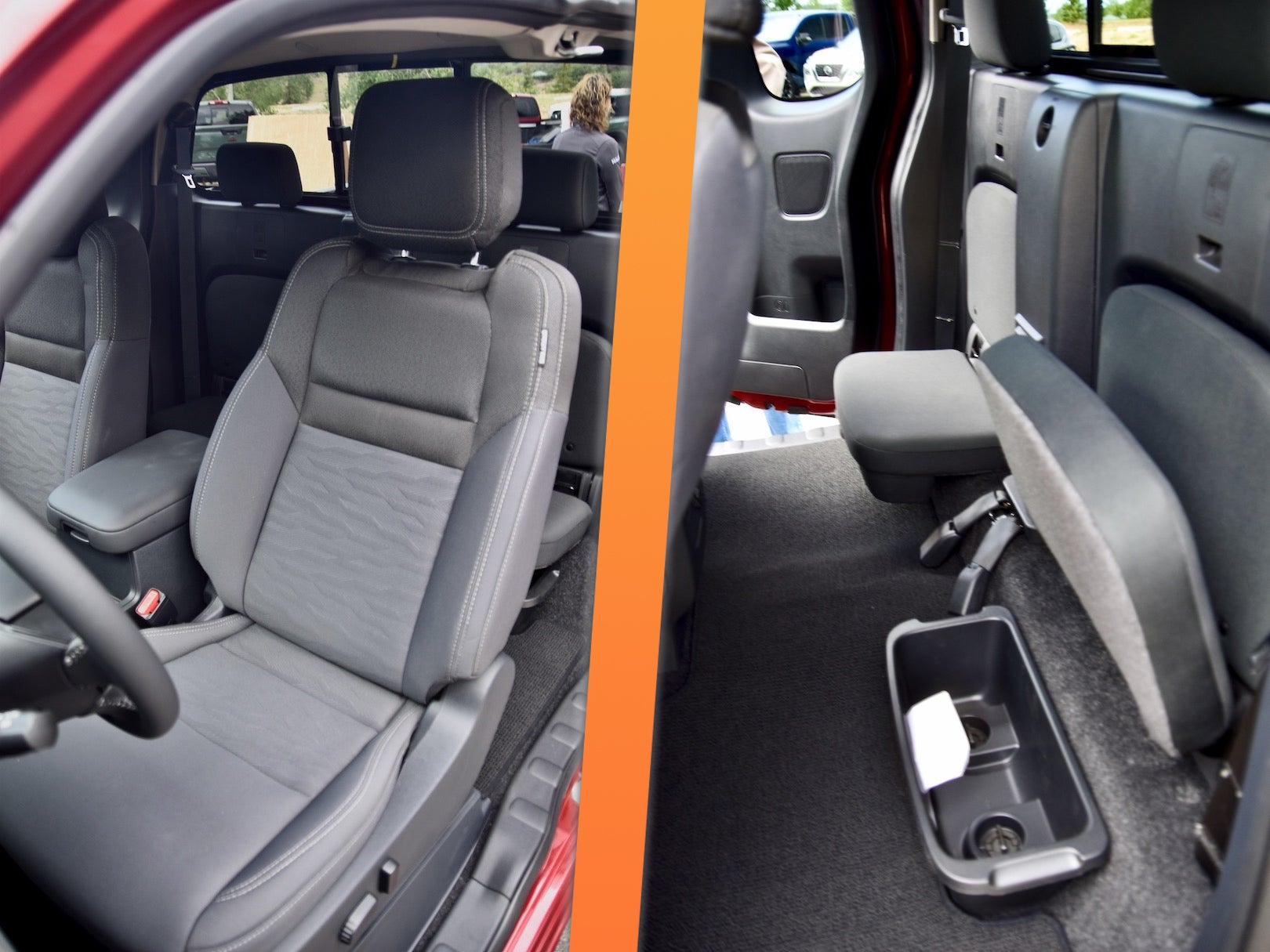 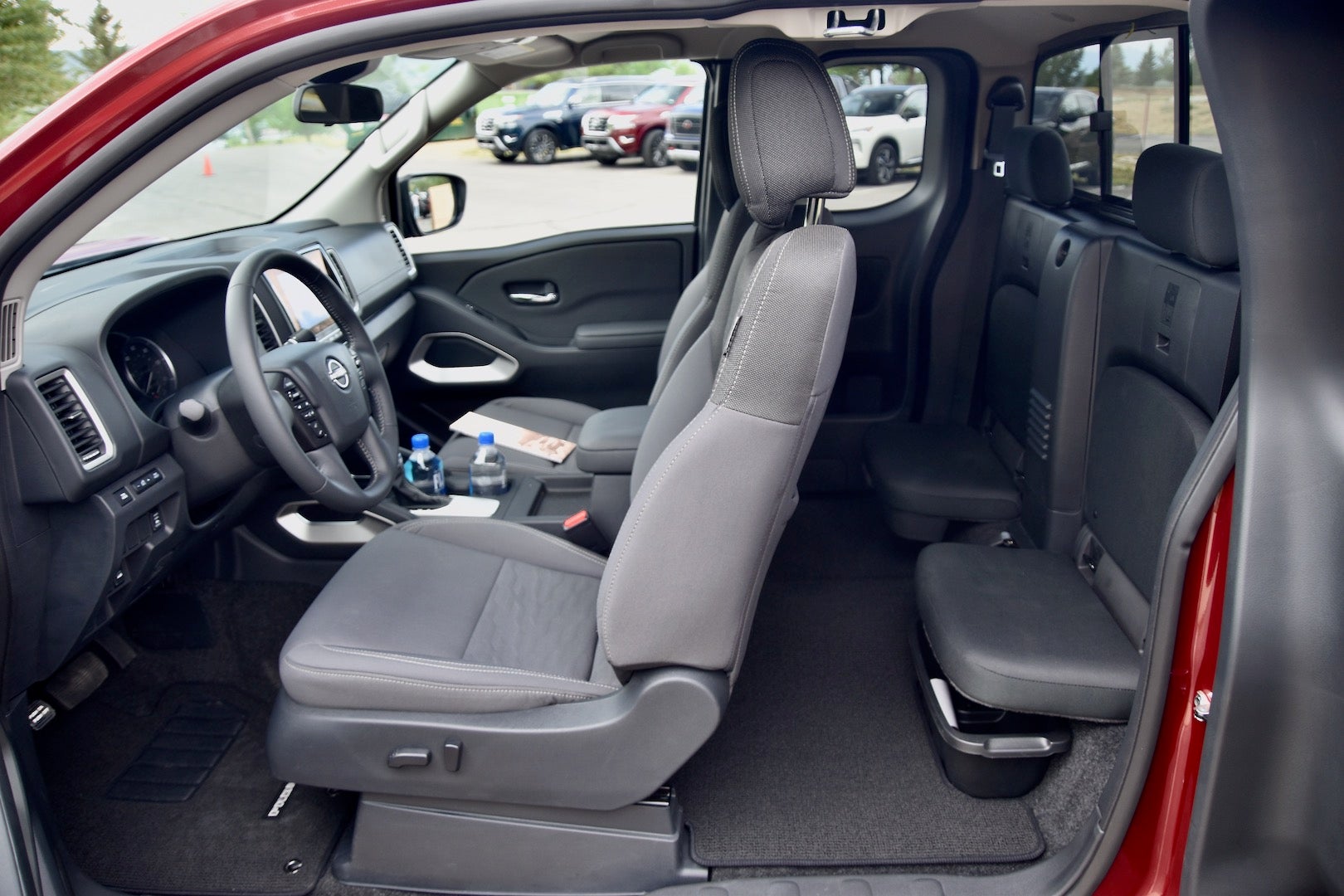 Up front are Nissan’s marvelous “Zero Gravity” seats (consistently some of the comfiest out there), which can be optionally clad in leather, heated, or electronically adjusted on the driver’s side—though not the passenger’s. Between these and a ride maybe marginally better than the Tacoma’s, it’s a more comfortable truck to drive, not to mention a quieter one, measuring a few decibels quieter at 60 mph. This also helps highlight how good the optional 10-speaker Fender audio is, with its percussive bass that doesn’t drown out subtler melodies at anything short of extreme volume.

It doesn’t have to shout down the drivetrain, either, which speaks only when spoken to, emitting a V6 grumble that by not sounding like a straight-piped Z is pleasant. This sound is, of course, only a side benefit of the Frontier’s class-best horsepower, which makes it respond to the throttle with a surge the Tacoma can’t match. The other pedal, while touchy, doesn’t stab the way the Tacoma’s brakes do, accounting for one of several tactile fronts where the Nissan trounces the Toyota. 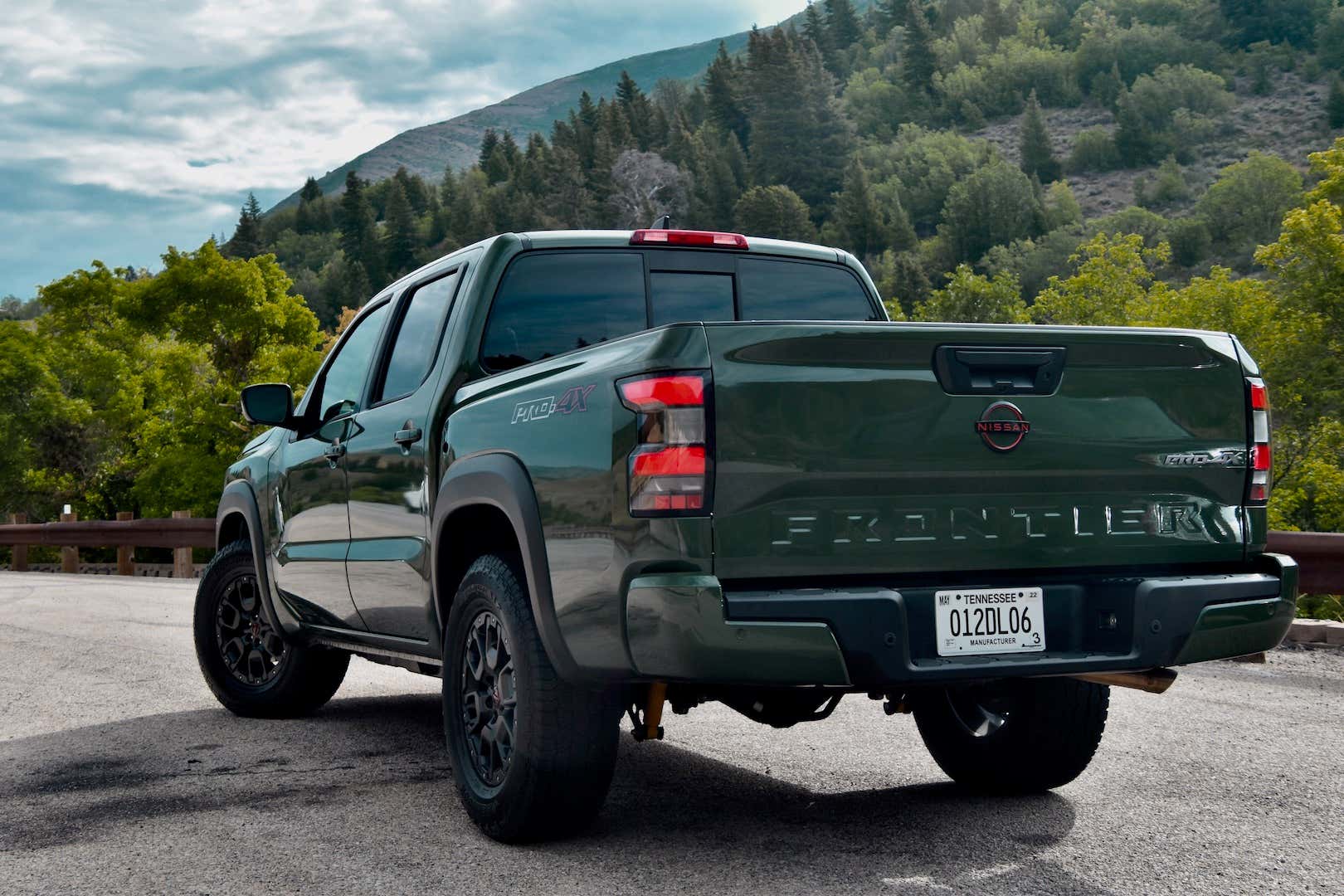 2022 Nissan Frontier Pro-4X by the roadside

Those low sills and that narrow, squared-off body give an impression driving of a slim, nimble truck, a feeling only magnified by the weighty hydraulic steering rack. Being such, it relays the real effort of turning the Frontier’s front wheels, of operating machinery, of driving a damn truck—something not all its rivals accomplish. It confers a confidence in the Frontier’s handling that its suspension—with that added rear sway bar—delivers on, cornering without a peep where a Tacoma TRD Off-Road or a Ford Ranger FX4 would whine and try to invert themselves.

Between this truck’s quicker steering, more powerful engine, and drama-free cornering, it feels still more agile than its already lean forebear. Though I preferred the last gen’s brakes, driving that truck long distances wore me out. This one, with its quieter interior, smoother transmission, and far superior seats, didn’t, even when the tarmac road to rocks on my climb over a mountain.

Exercising the Frontier’s higher off-road trim the Pro-4X (as opposed to the rear-drive Pro-X) on an off-road course too severe for base 4x4s, I found it still had the suspension articulation to both crawl competently and scramble over uneven patches of loose rock without losing composure. Its button-activated locking rear differential helped propel it up loose hills, and with descent control, ease back down them, saving my focus for maneuvering. Its 31.6-inch all-terrain tires, 9.4 inches of ground clearance (equal to the Tacoma TRD Off-Road), and Bilstein shocks held up to unexpected jounces in clouds of dust, and when I used every last bit of that clearance, the Frontier’s four skid plates took the scrape for the radiator and oil pan. 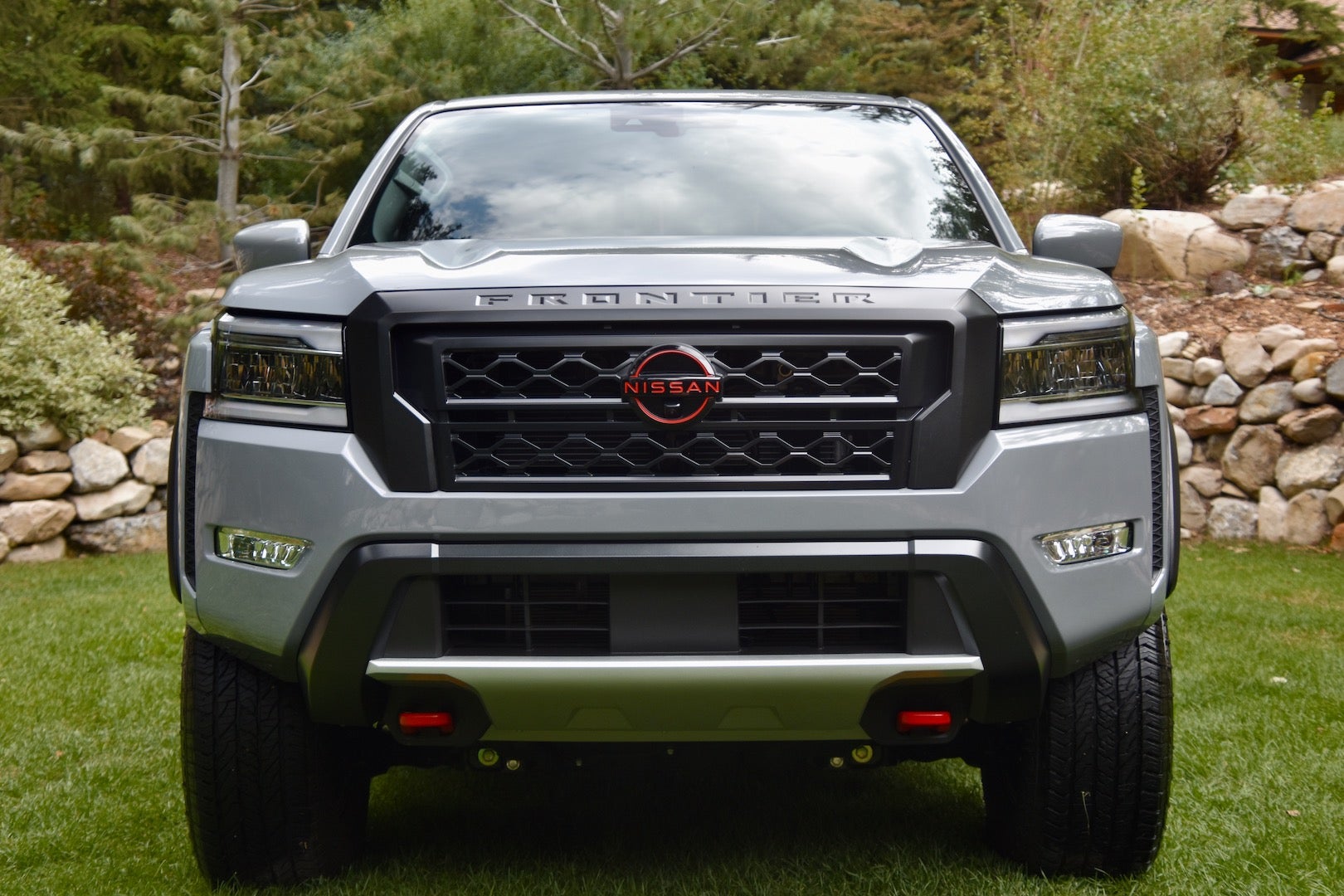 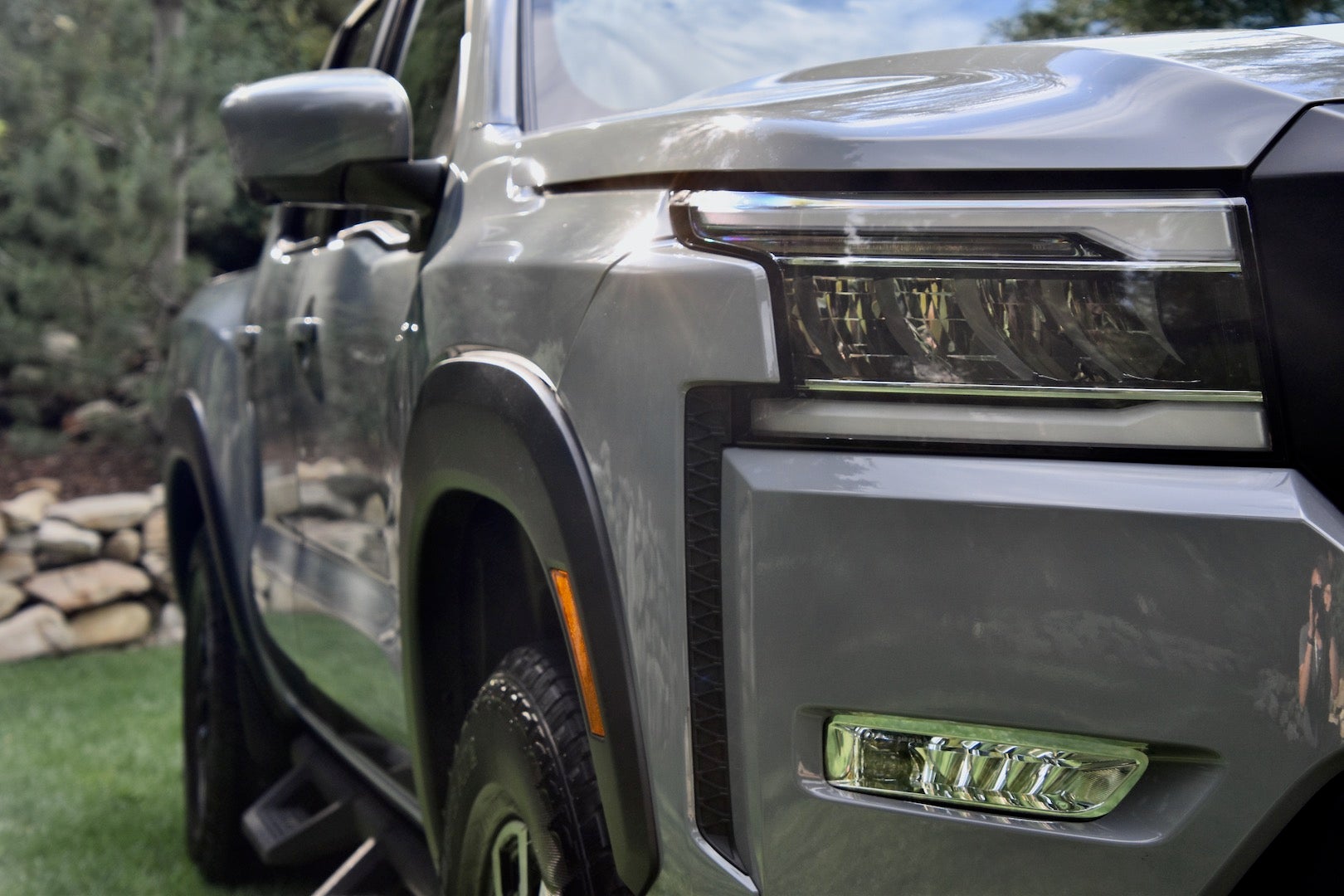 This occurrence was a one-off, though, as with approach, breakover, and departure angles of 32.3, 19.6, and 23 degrees respectively, missteps will be a rarity. These, in addition to ground clearance, nearly mirror the TRD Off-Road, though don’t quite measure up to the TRD Pro or the Jeep Gladiator. Both of those off-road dynamos, though, come at greater cost to their driver, both in daily livability and dollars. Equipped with four-wheel drive, an automatic, and leather seats, the 2022 Nissan Frontier Pro-4X starts at $38,415 versus $39,285 for a comparable Gladiator, or $43,725 for an equivalent TRD Off-Road—not even the TRD Pro.

At the opposite end of the spectrum, the Frontier no longer undercuts the rest of the market. The base Frontier S king cab now starting at $29,015, above the Tacoma, Ranger, and Canyon but below the Gladiator and Honda Ridgeline. It’s not the cheap option anymore, and shedding that perception might be an uphill battle for Nissan. Then again, between offering the most modern styling in its class, a strong standard powertrain, and improving on the last model’s already laudable driving dynamics, the new Frontier has an outside shot at becoming the midsize pickup to beat when it hits dealers in early September. 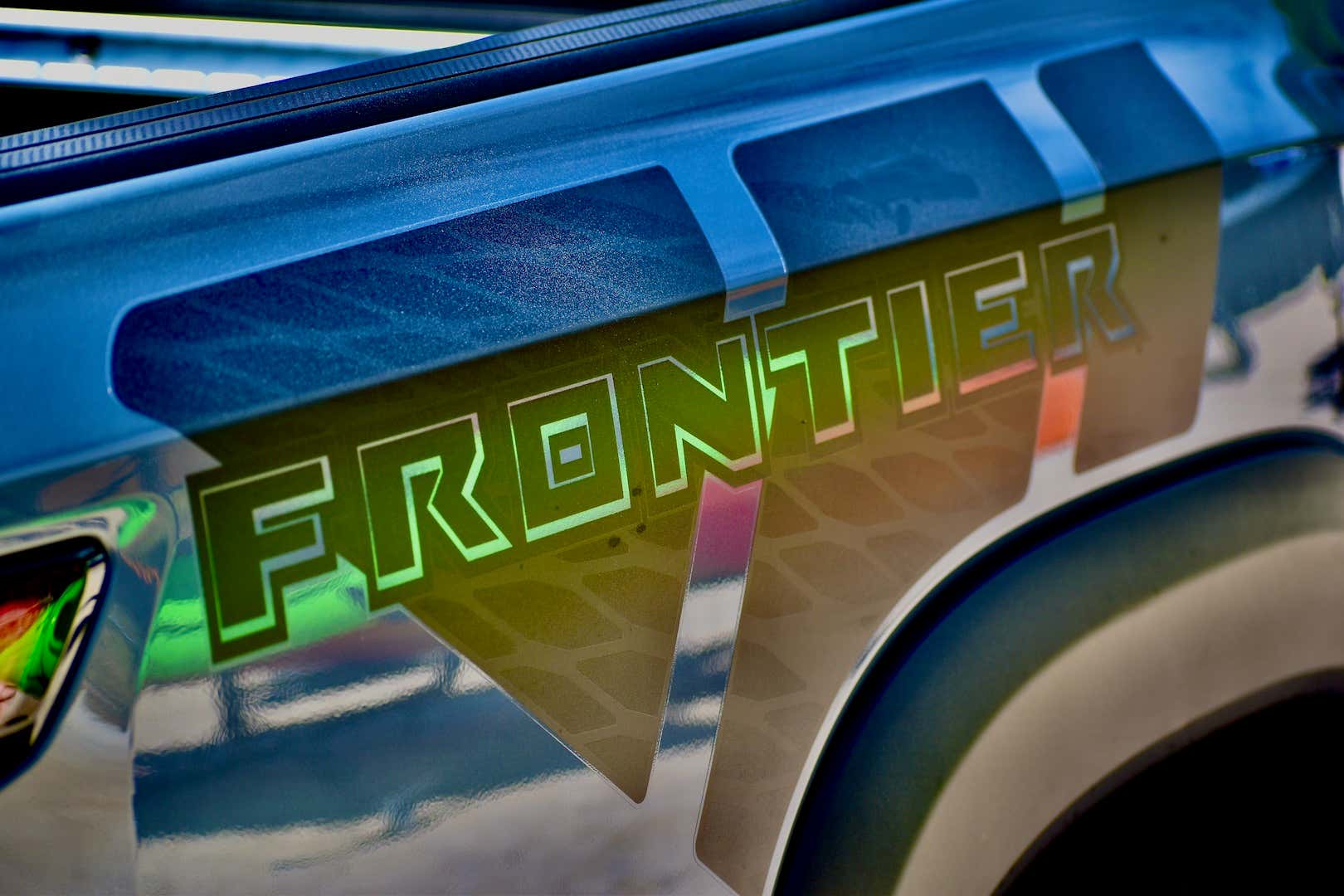 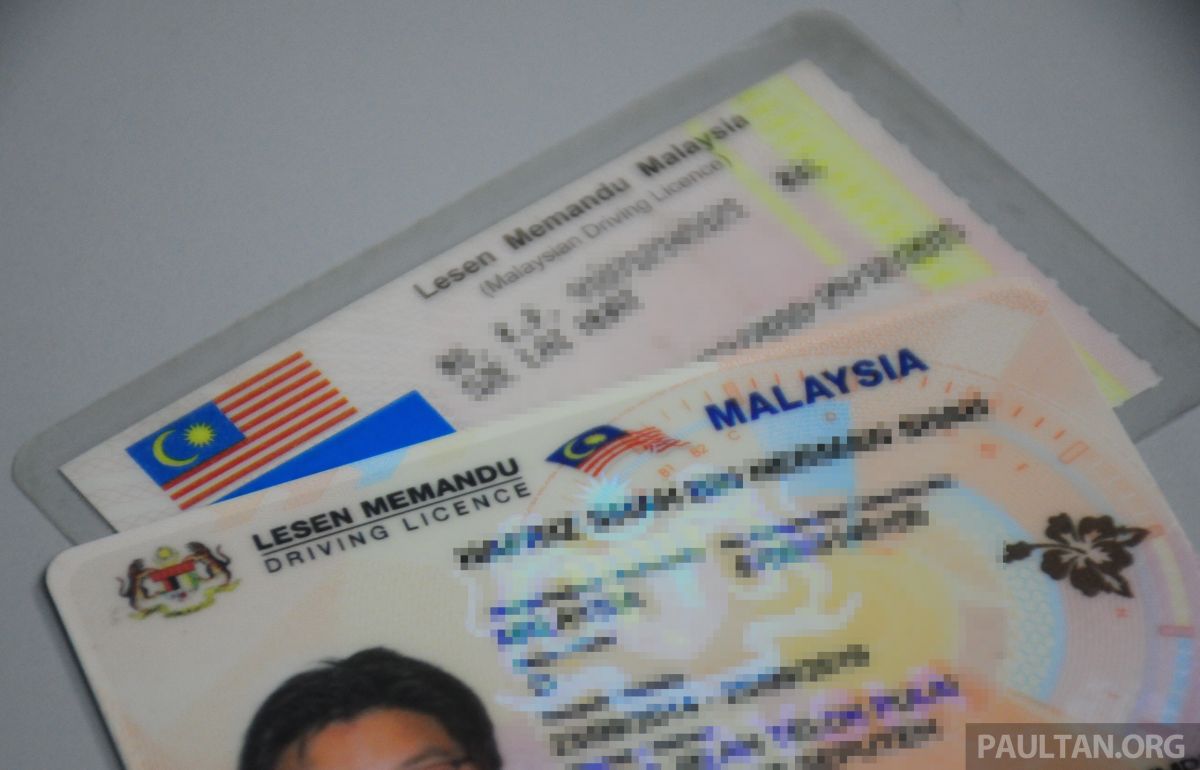