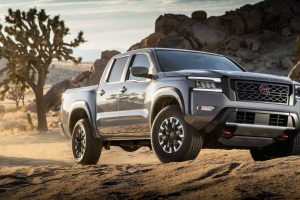 Around since 2004, the outgoing Nissan Frontier is one of the absolute oldest “new” vehicles you can buy today. Strictly speaking, it isn’t a bad truck, and Nissan will tell you that it’s made a lot of changes and added plenty of new features under-the-skin throughout the years. That might be true but it doesn’t really change the fact that its actual skin is ancient and a bit hard to justify paying new-truck prices for. Well, ladies and gents, that ends now because, for the 2022 model year, the Nissan Frontier is finally new.

While the 2022 Frontier, as you can see from the pictures, is thoroughly new, it isn’t all-new. Nissan says the truck is riding on a “heavily-revised version” of the existing Frontier’s frame, a strategy that’ll very likely be repeated with the company’s next-generation Z sports car. Despite the old bones, the new Frontier sheet metal is very fresh, coming together to form a boxier, modern, much more rugged design that’s been inspired by Nissan’s Hardbody pickup from the ’80s and ’90s. 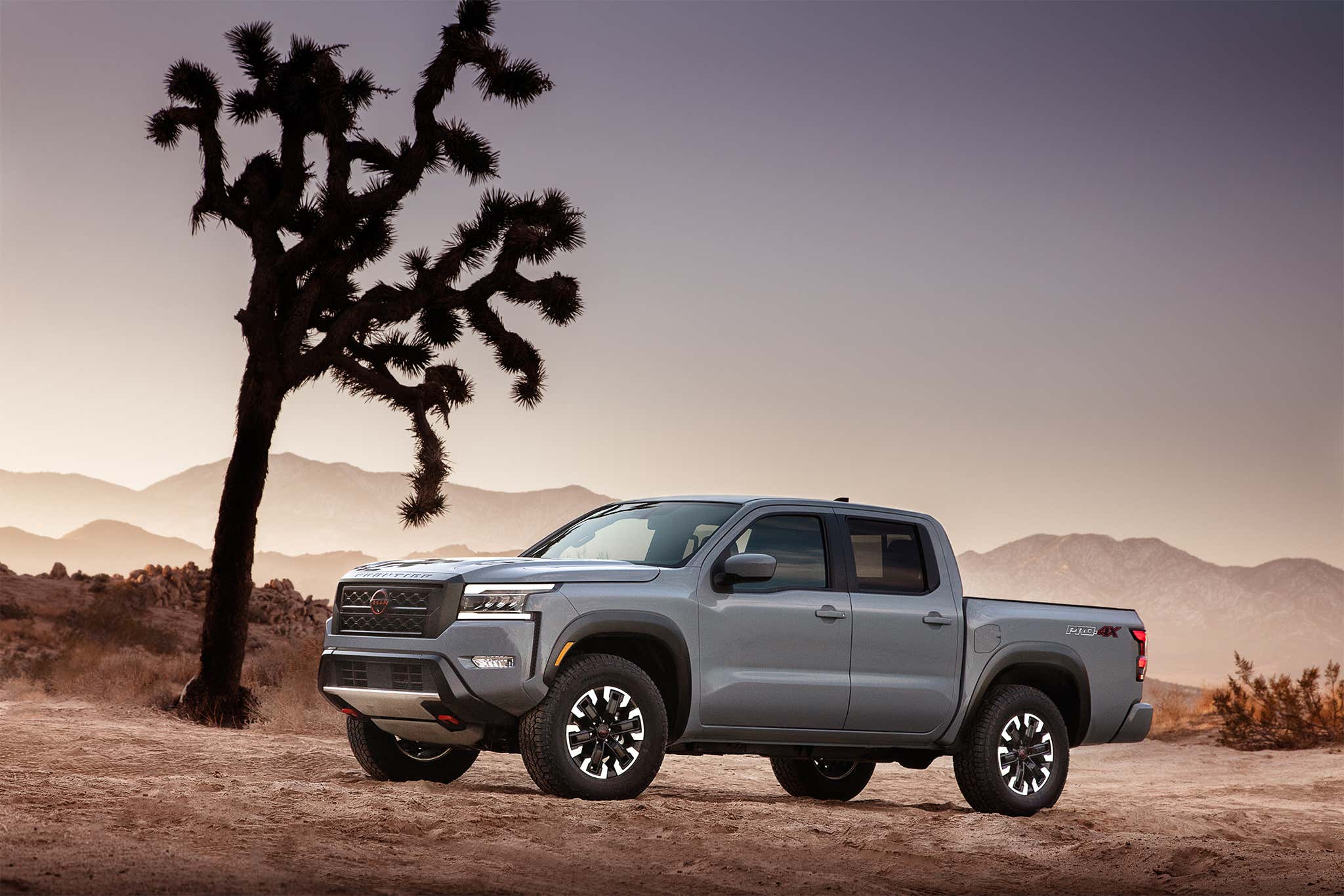 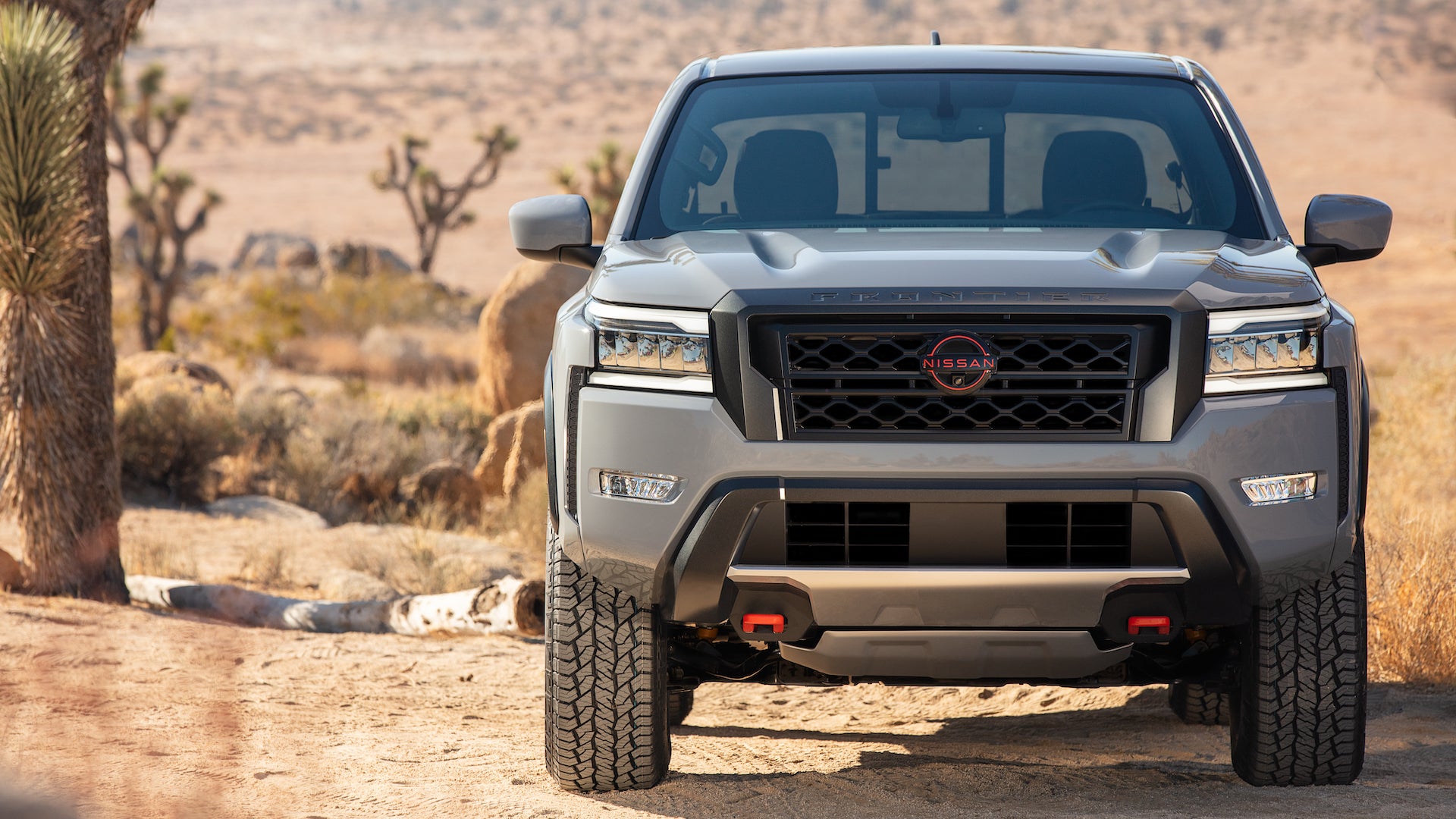 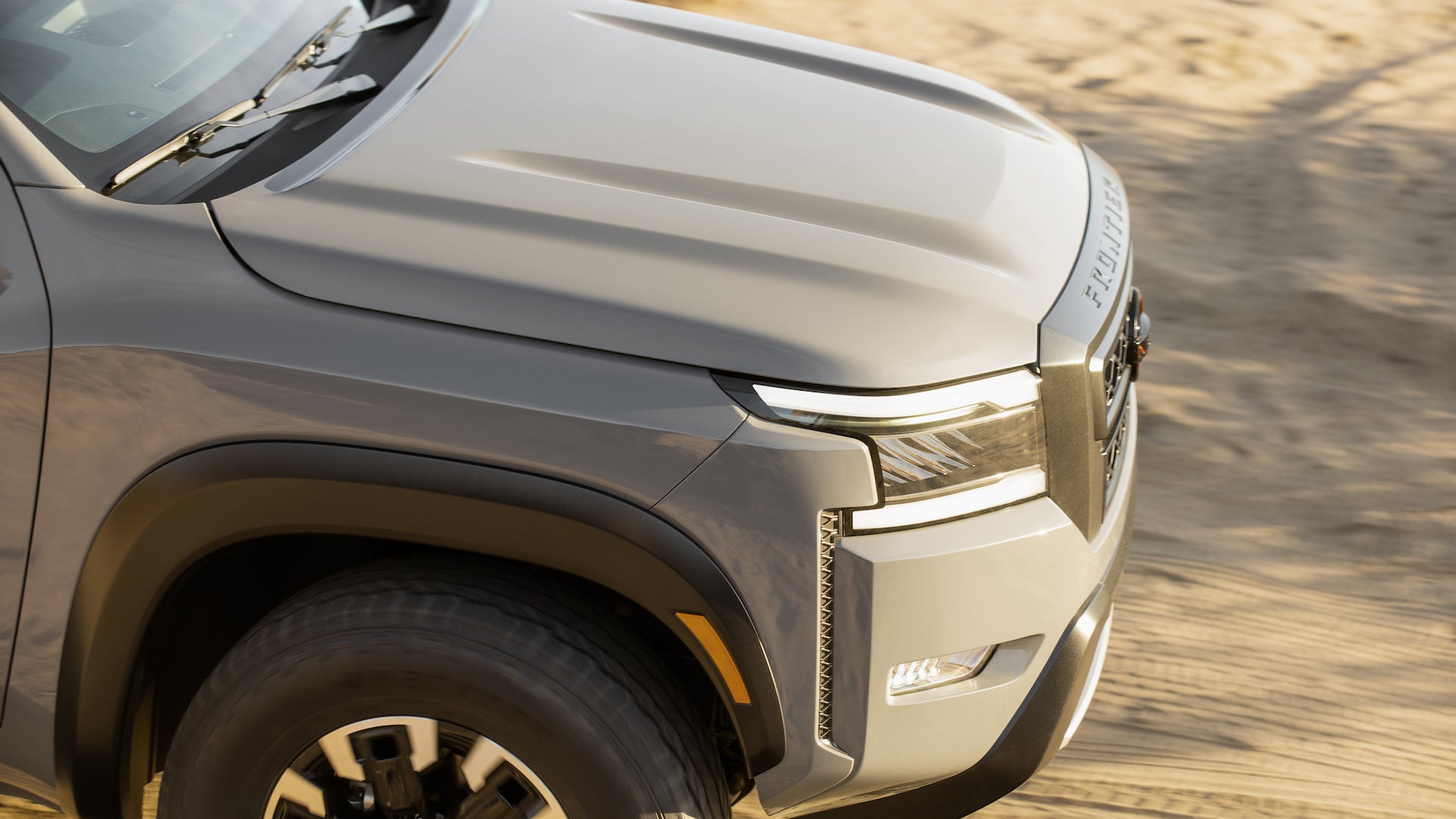 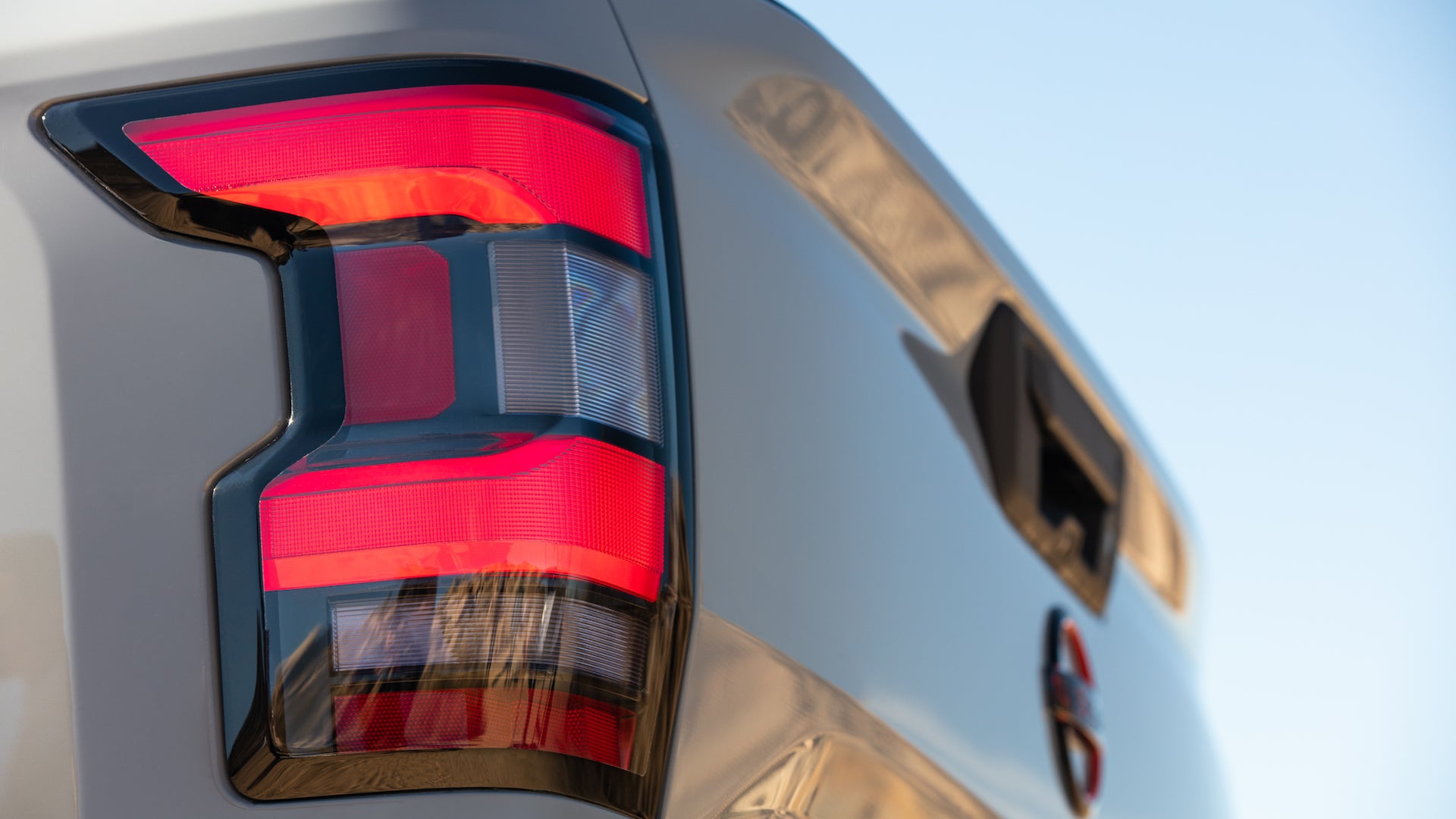 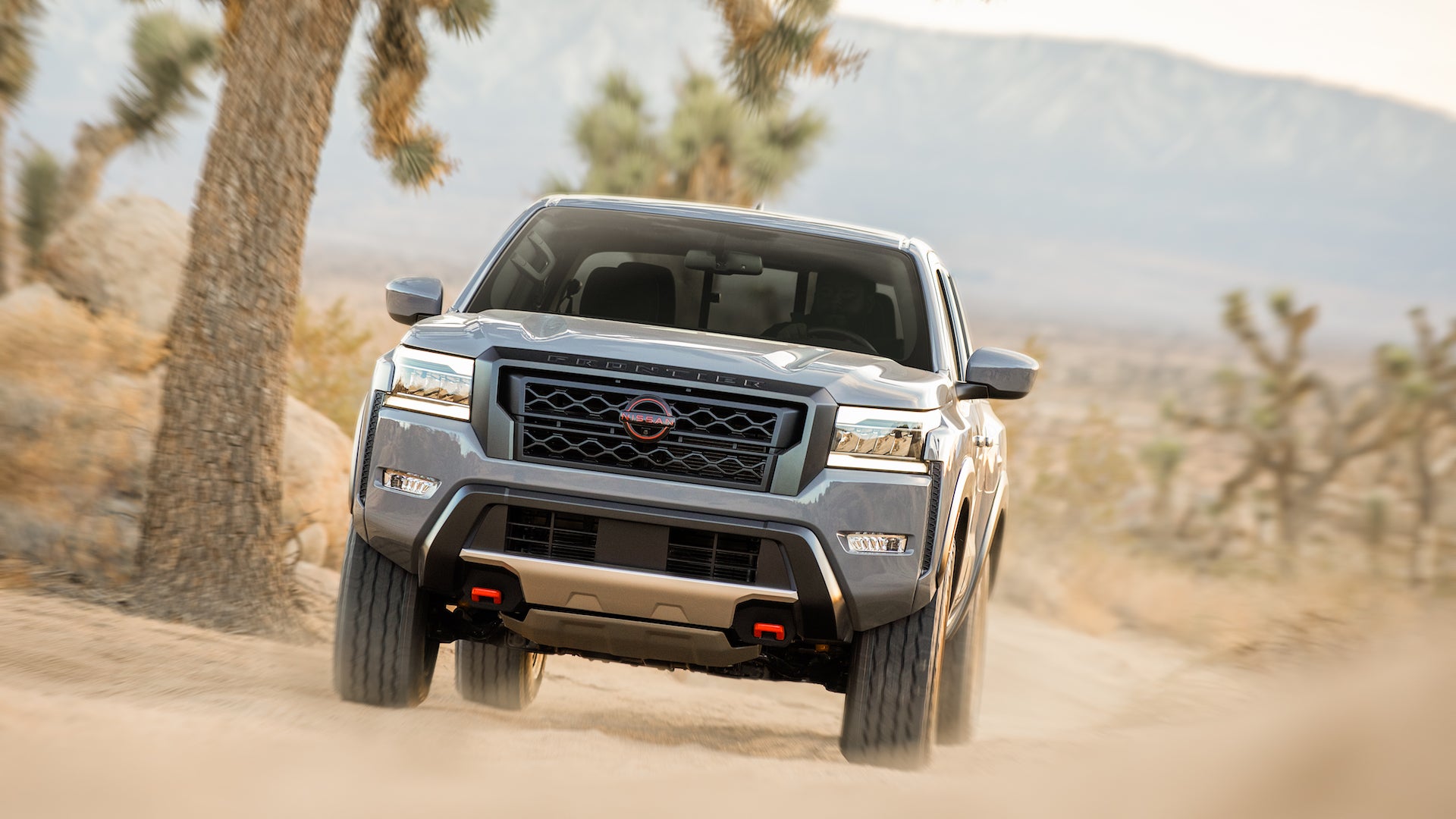 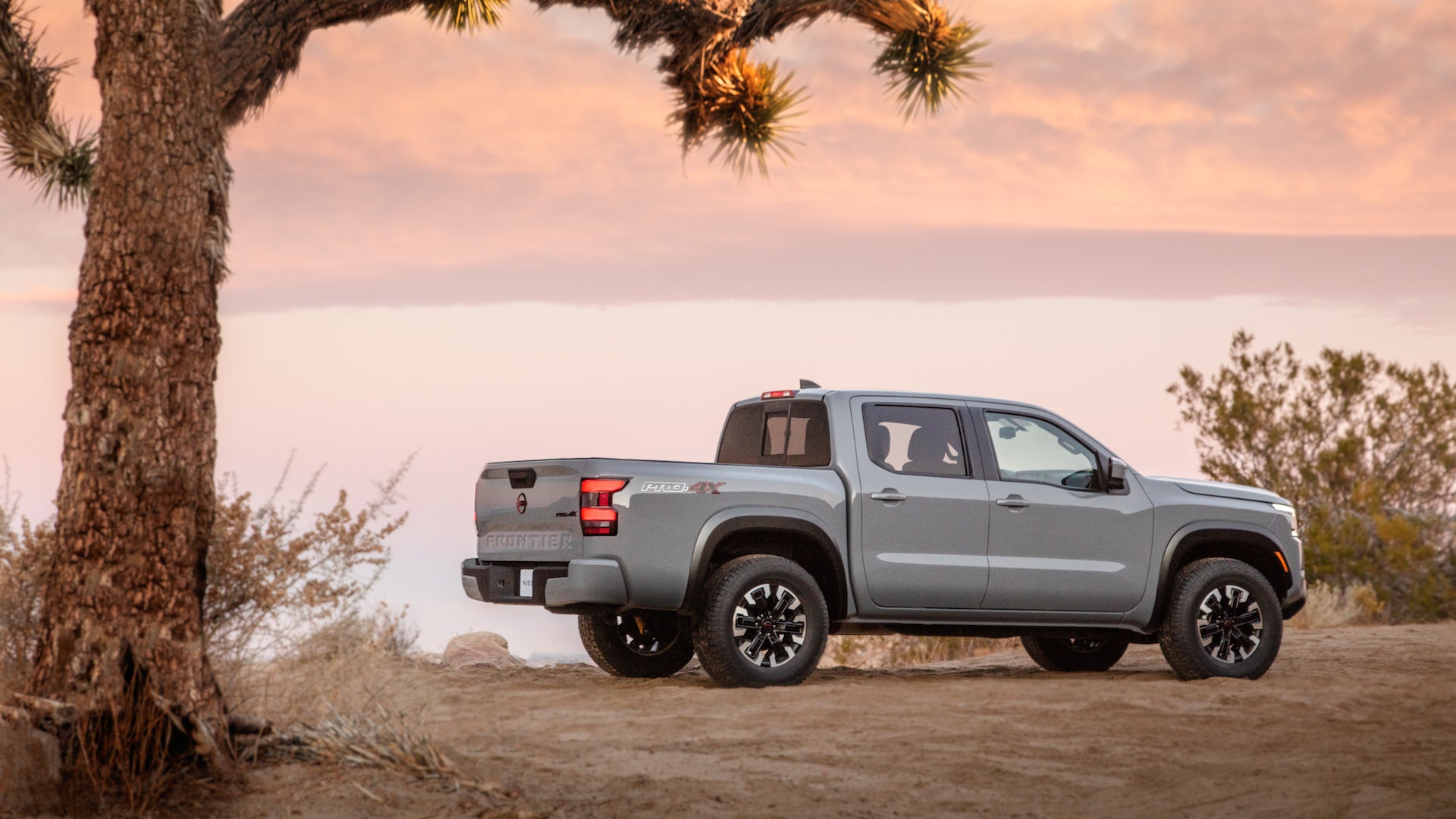 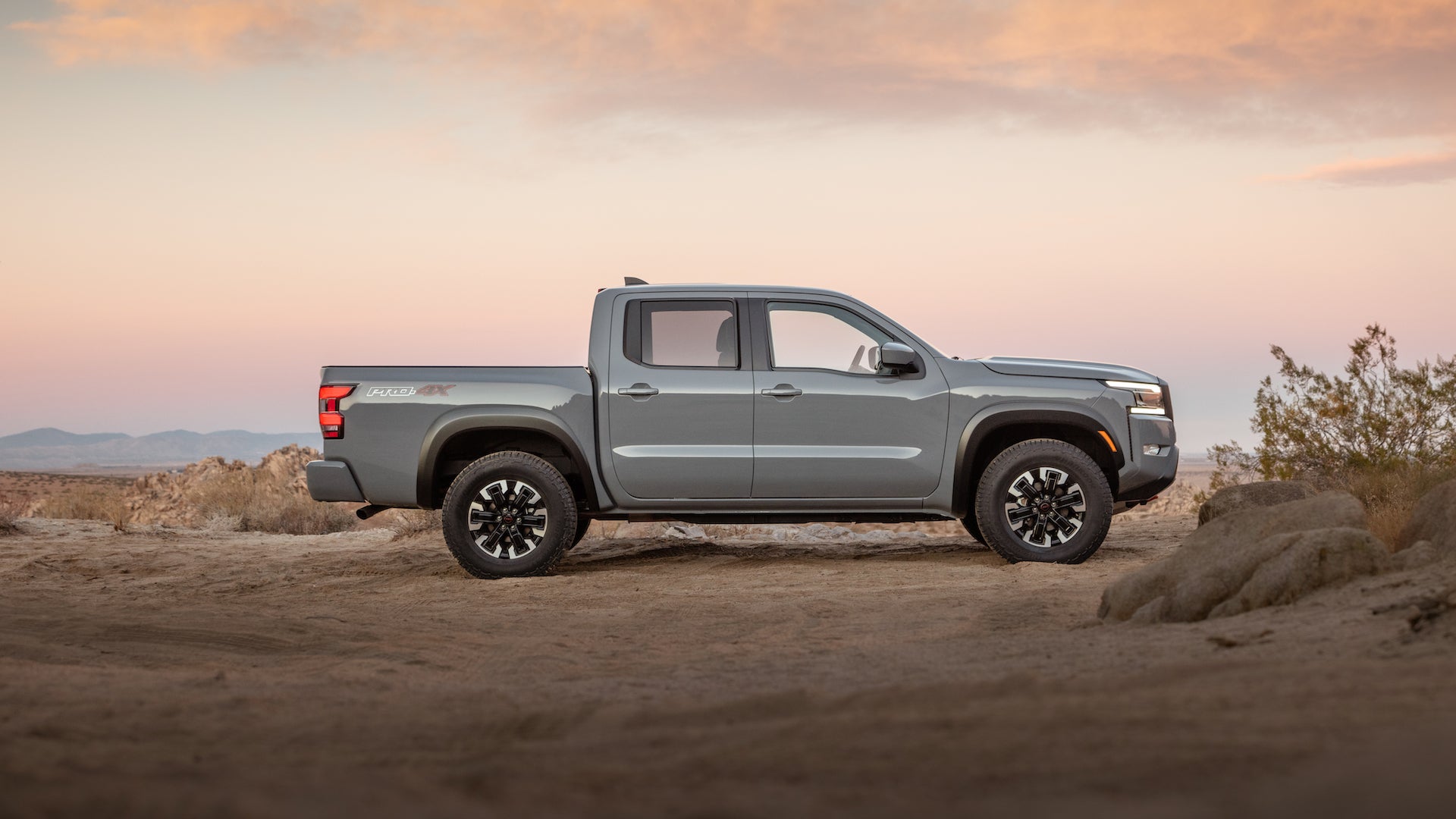 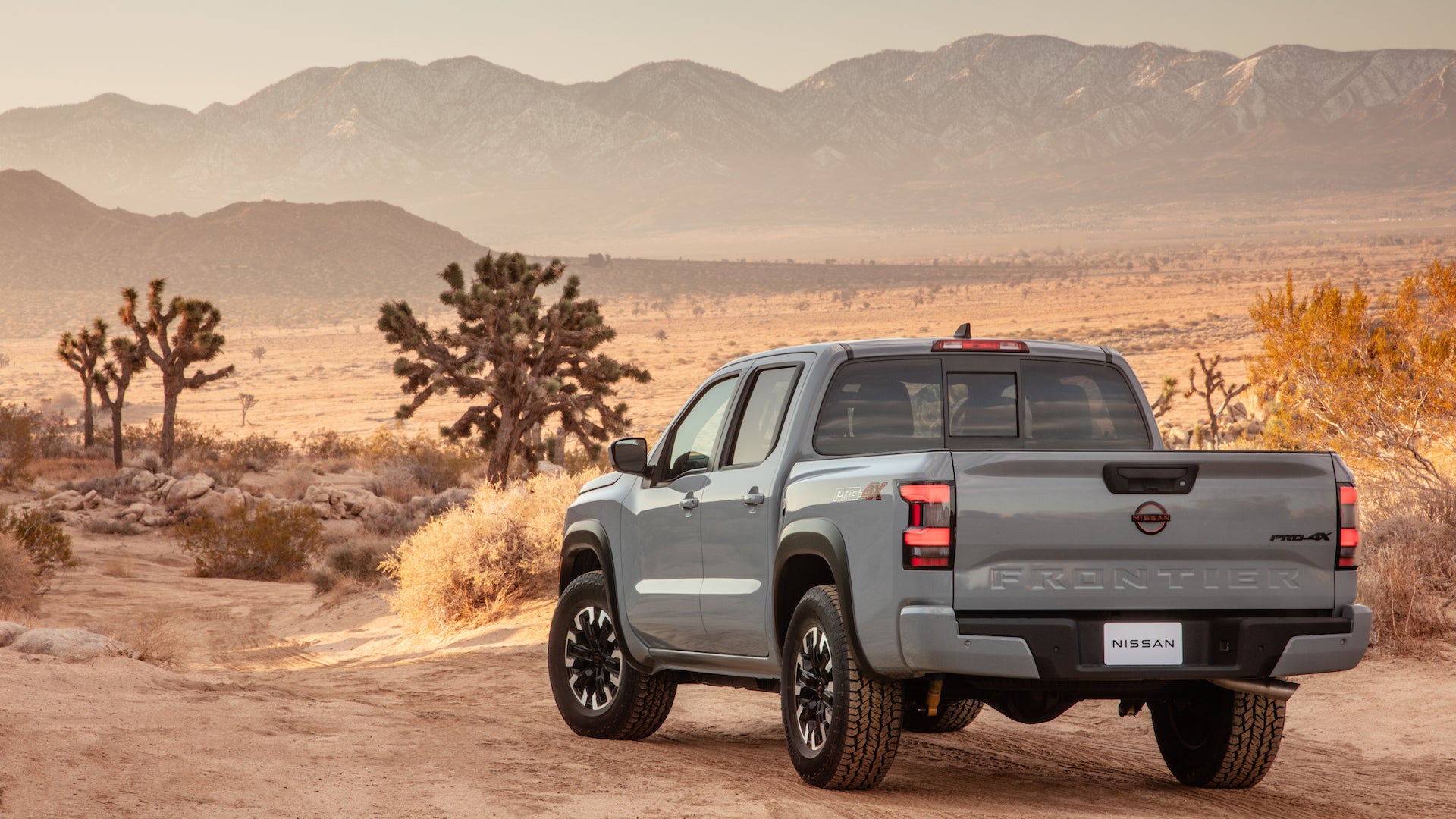 Under the hood sits the same 310-horsepower, 3.8-liter V6 that first debuted on the 2020 model but, considering 93 percent of that engine consisted of “new or redesigned” parts then, think of it as the new Frontier’s new engine coming out a couple of years early rather than the new Frontier getting an old engine. That V6 puts out 281 pound-feet of torque and is attached to a nine-speed automatic transmission that’s been given an expanded lockup area, a new high-response electro-hydraulic system, long input shaft and a 99 percent wider gear range compared to the old five-speed.

Steering and suspension have also been revised. The truck’s hydraulic steering rack has been tweaked to deliver better on-center feel which Nissan says will prove less taxing to drivers on long trips as well as a steering ratio that’s been increased by 16 percent. On the suspension and chassis side of things, new hydraulic cab mounts apparently cut road vibration by 80 percent while new, class-exclusive urethane jounce bumpers give the Frontier smoother damping. The addition of a rear stabilizer bar and a bigger front stabilizer bar stabilize things for the benefit of stability. 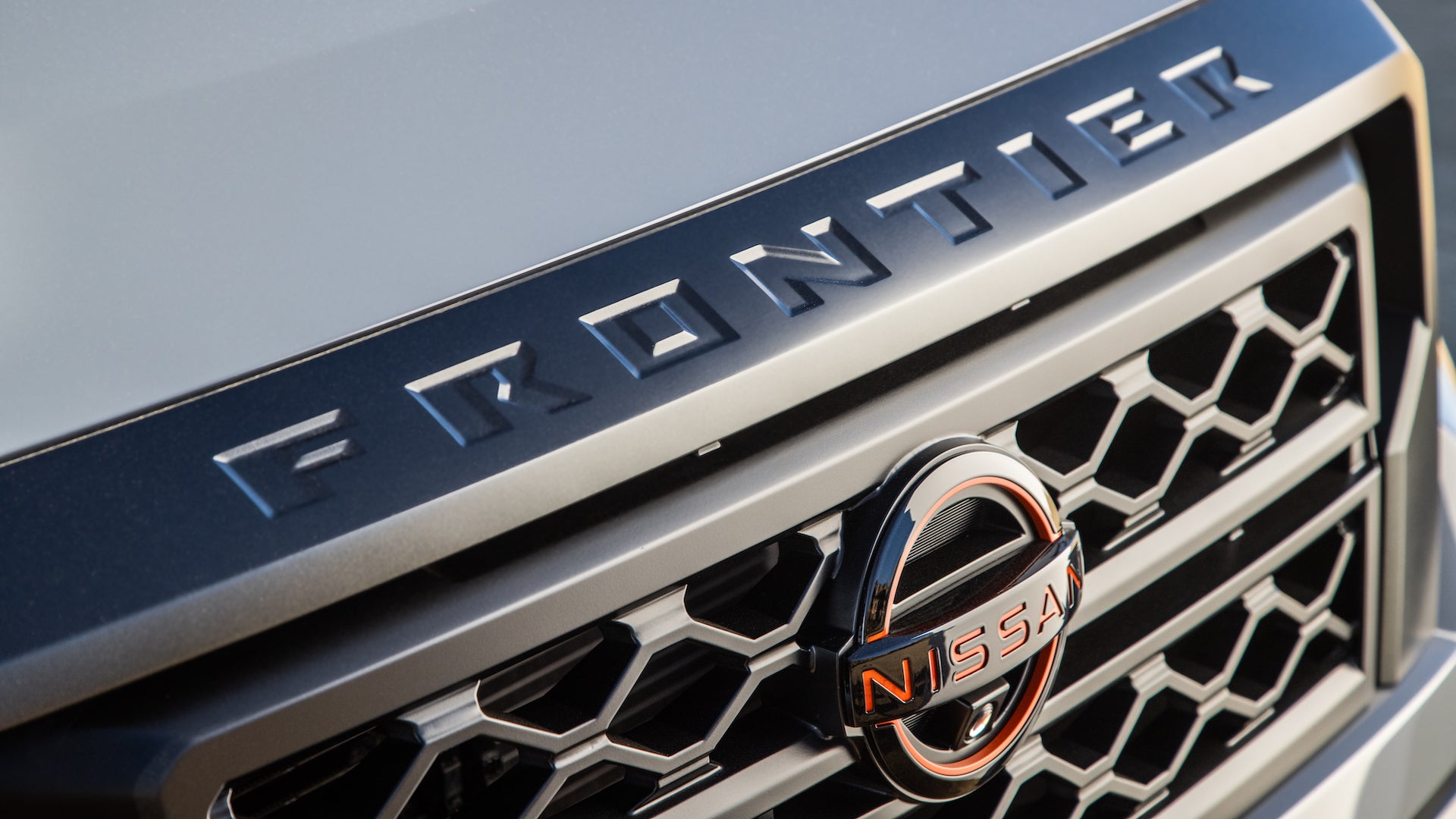 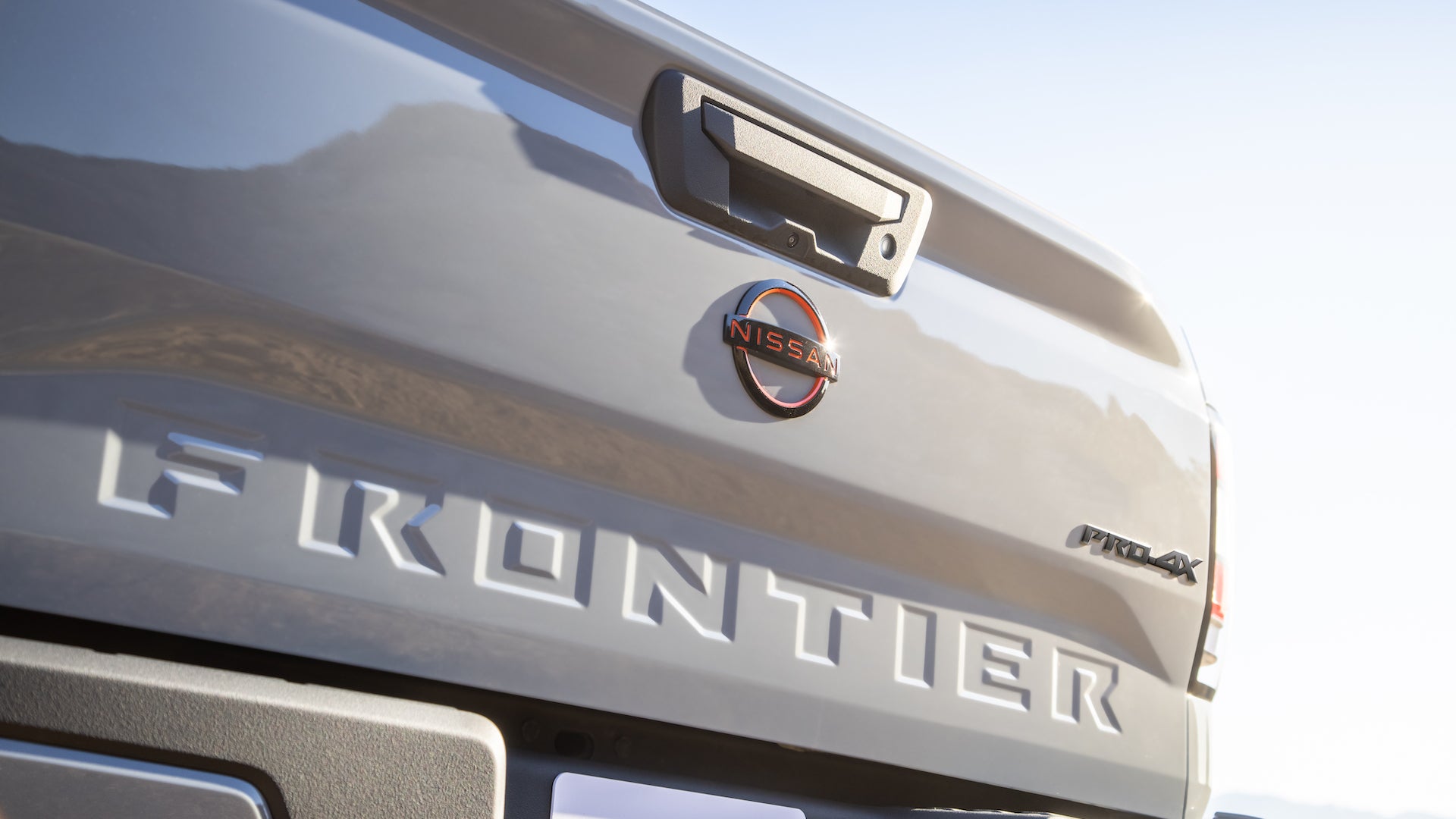 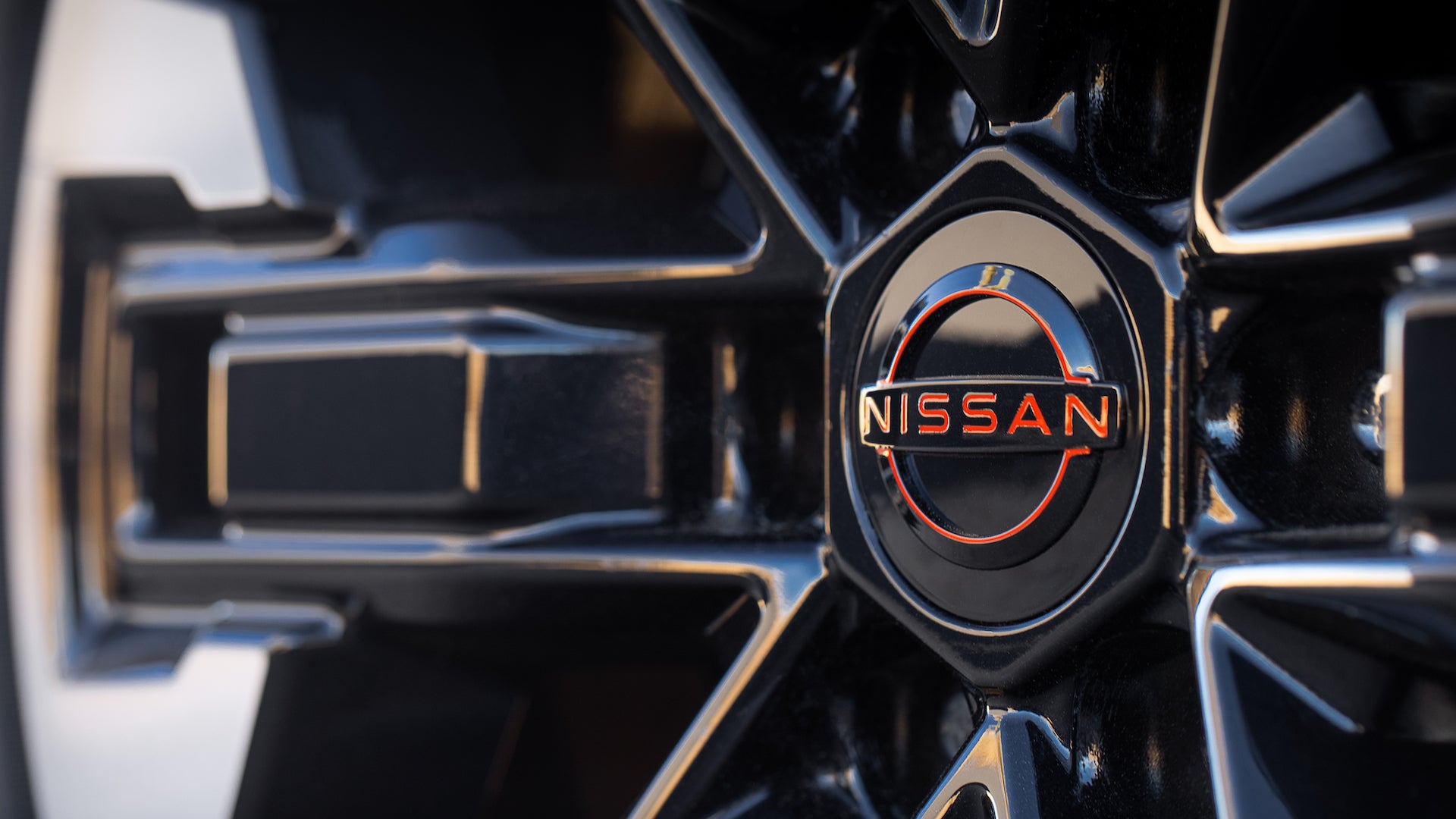 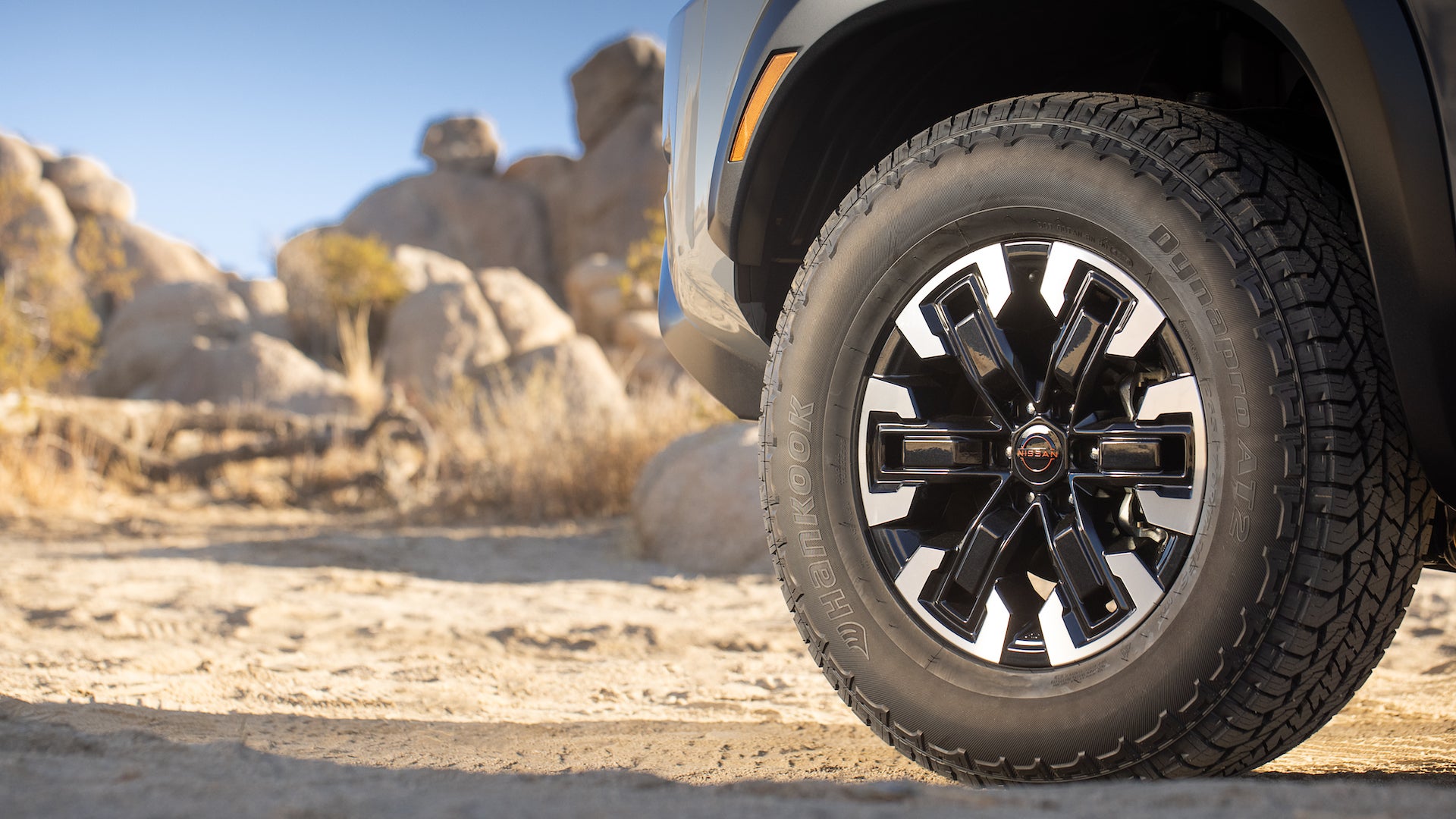 Available shift-on-the-fly, part-time 4WD features 2WD, 4HI, and 4LO modes, all electronically controlled by the truck’s part-time transfer case. Standard Hill Start Assist and Hill Descent Control on these 4WD models make navigating hills easy on both sides of the equation while a four-wheel limited-slip system helps the Frontier conquer slippery, loose surfaces. The snazzy-looking Pro-4X model with the red accents and LEDs seen here also gets an electronic locking diff, Bilstein off-road shocks, and underbody skid plates. A 2WD Pro model, known simply as the Pro-X, can also be had but does without the locking diff and skid plates.

As for the new Frontier’s credentials as a hauler, it can tow up to 6,720 pounds. Better managing all that poundage is a new Trailer Sway Control which automatically applies brakes when trailer sway is detected. With max payload coming in at 1,610 pounds for the 2WD SV, an optional Utili-track Channel System in the bed uses three “C” cross-sections rails, as well as four fixed bed tie-down hooks, making hauling cargo in the back of the Frontier itself secure and easy. A new dampened tailgate assist is standard as are two stop lamp lights on the back of the cab. Two LED bed lights can also be optioned. 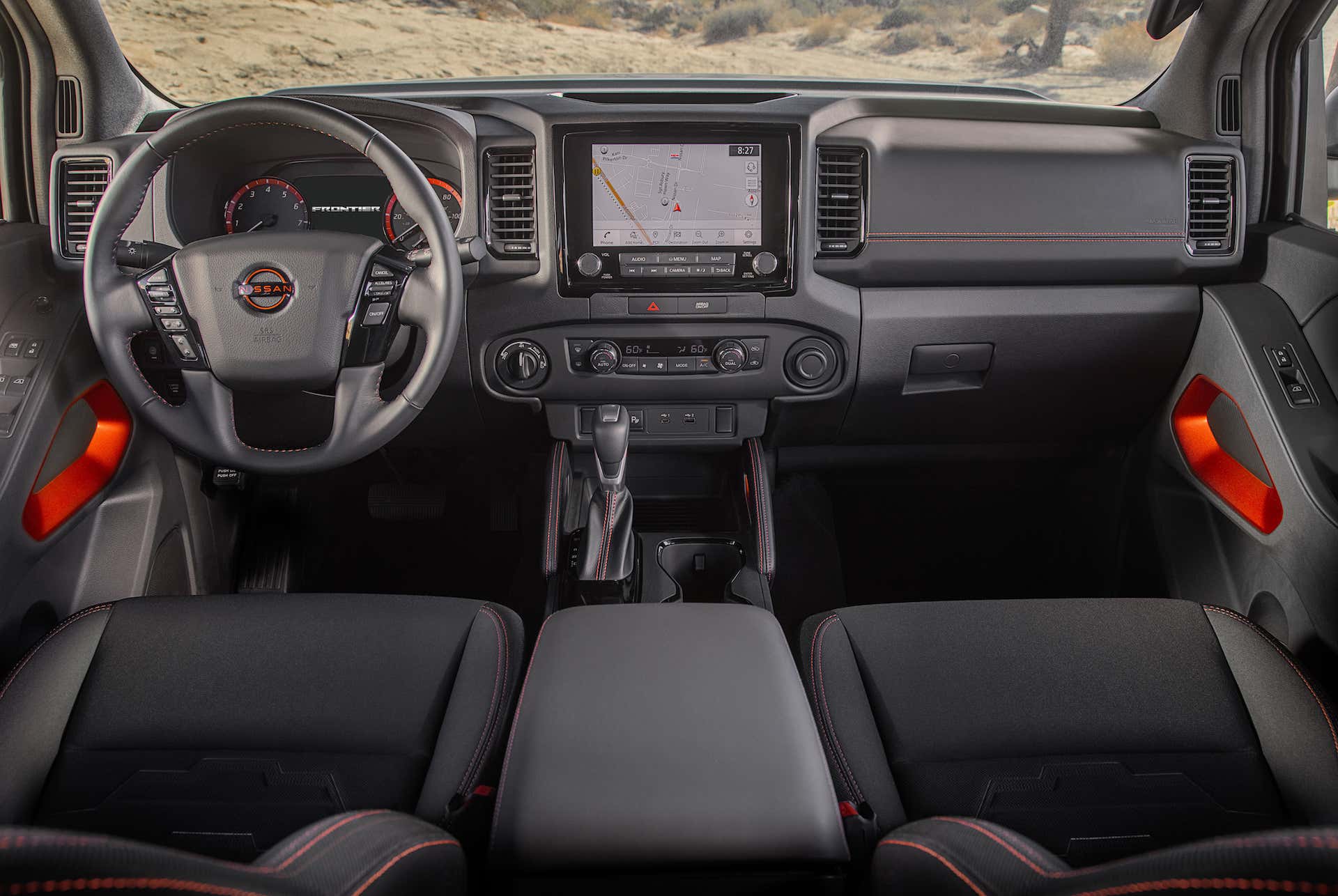 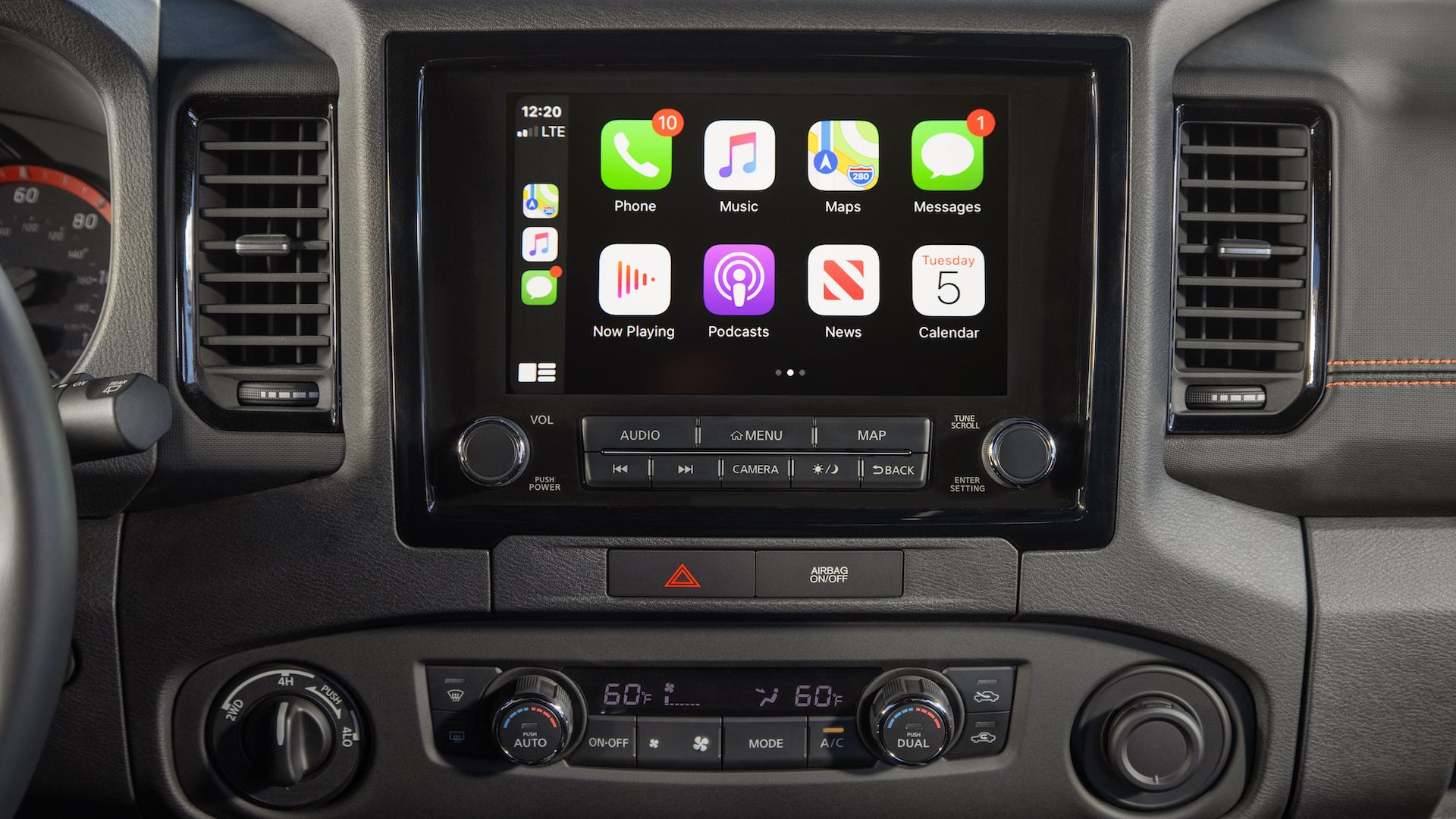 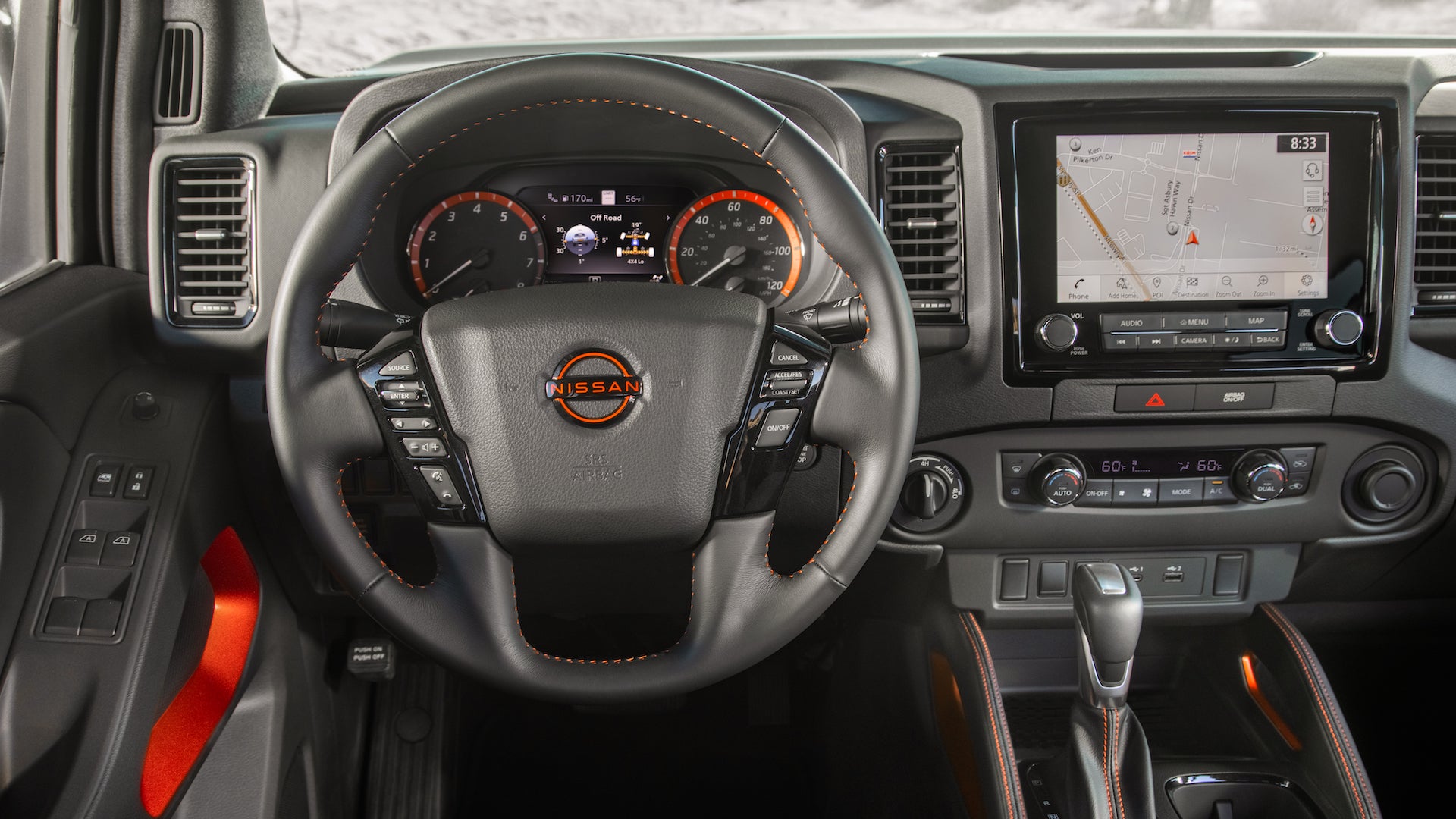 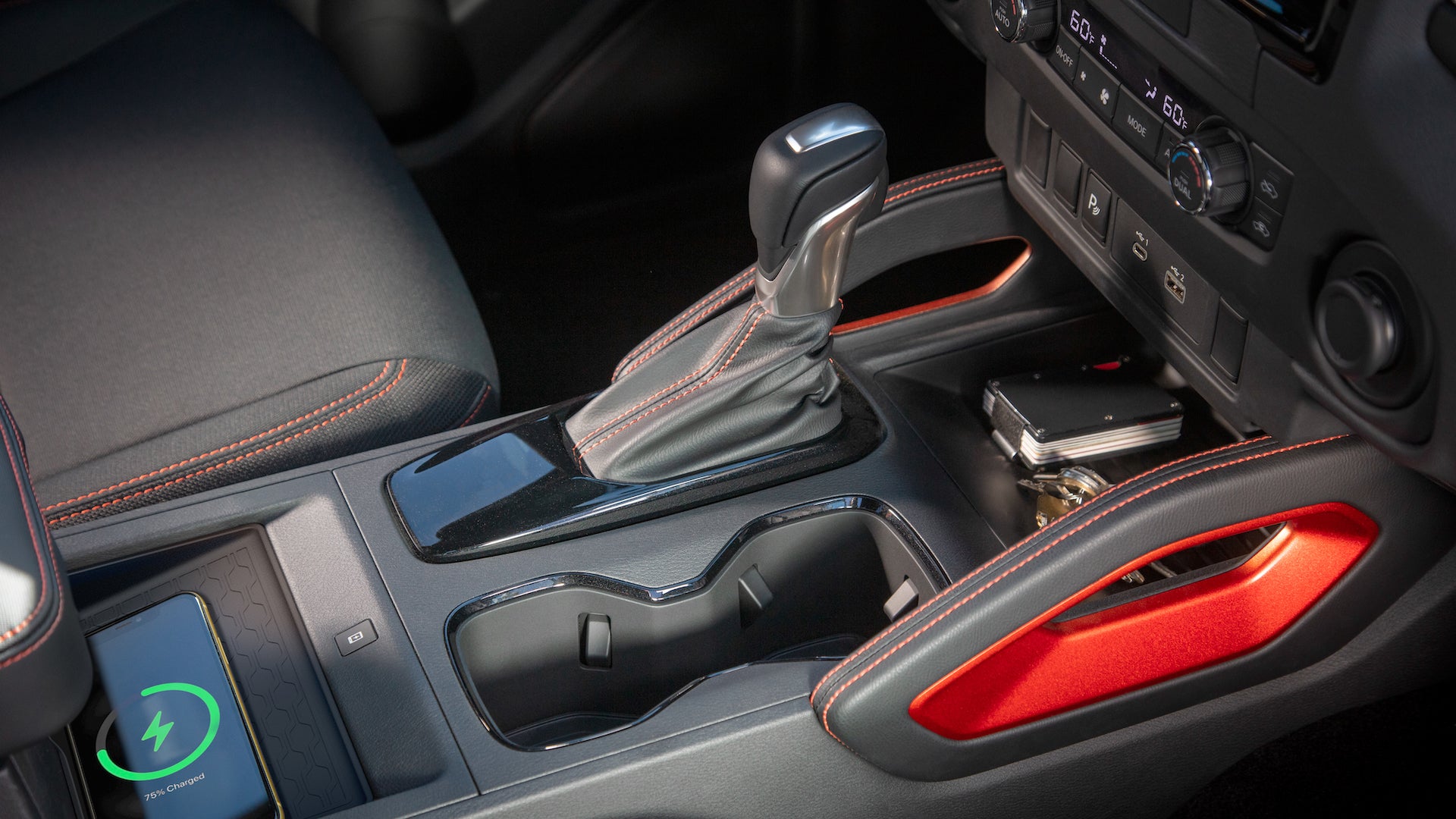 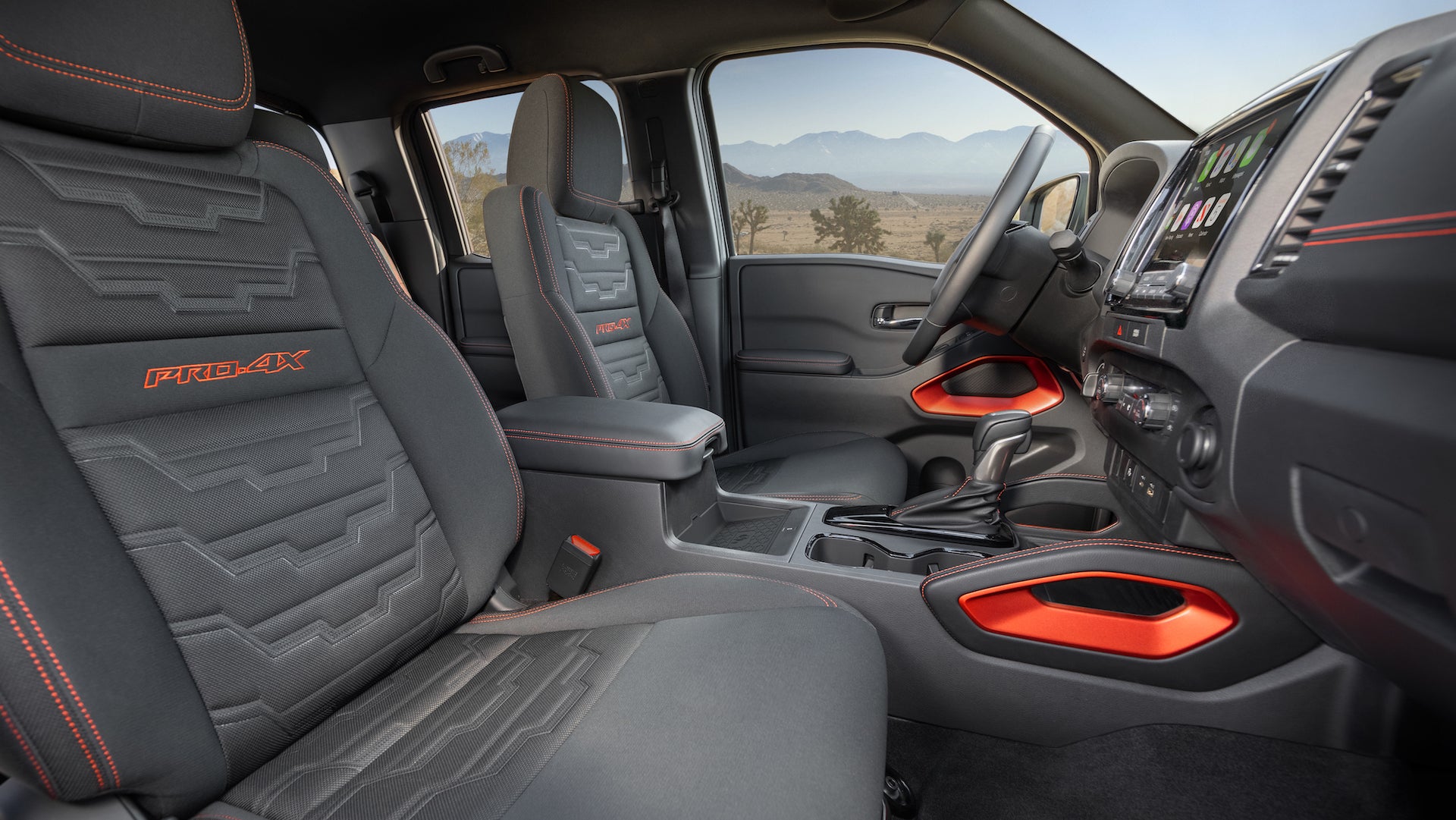 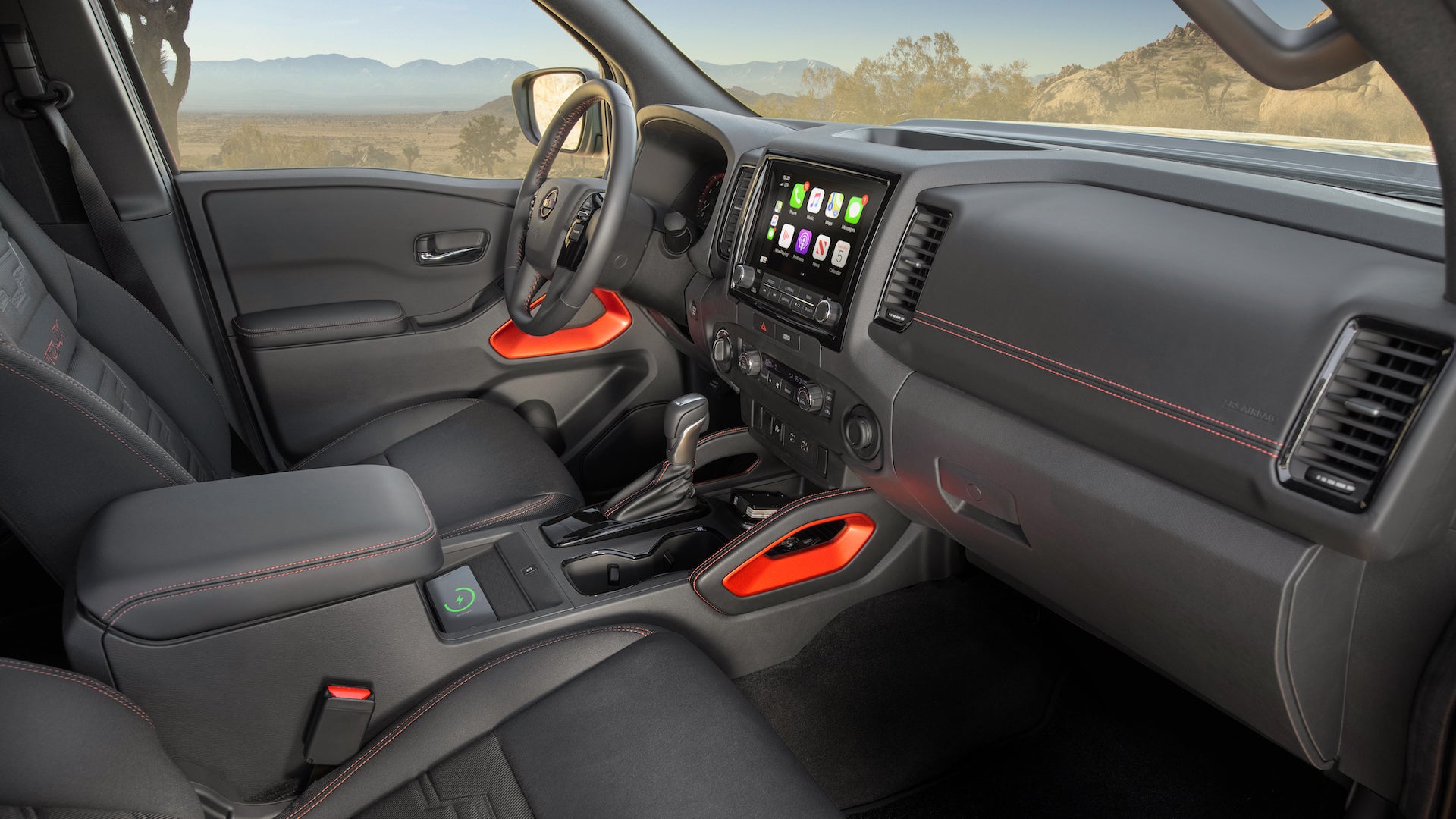 Just like the exterior, the 2022 Nissan Frontier’s interior has also been thoroughly redone. Inspired by adventure gear, the new cabin features an available nine-inch infotainment touchscreen—the biggest in the class, apparently—with Apple CarPlay and Android Auto. Wireless charging is available on the Pro models. As for wired charging, two USB ports (one USB-A, one USB-C) are standard as are two 12-volt outlets. Two 110-volt, 400-watt outlets (one in the rear, another in the bed) can be had as an option on SV and Pro models. 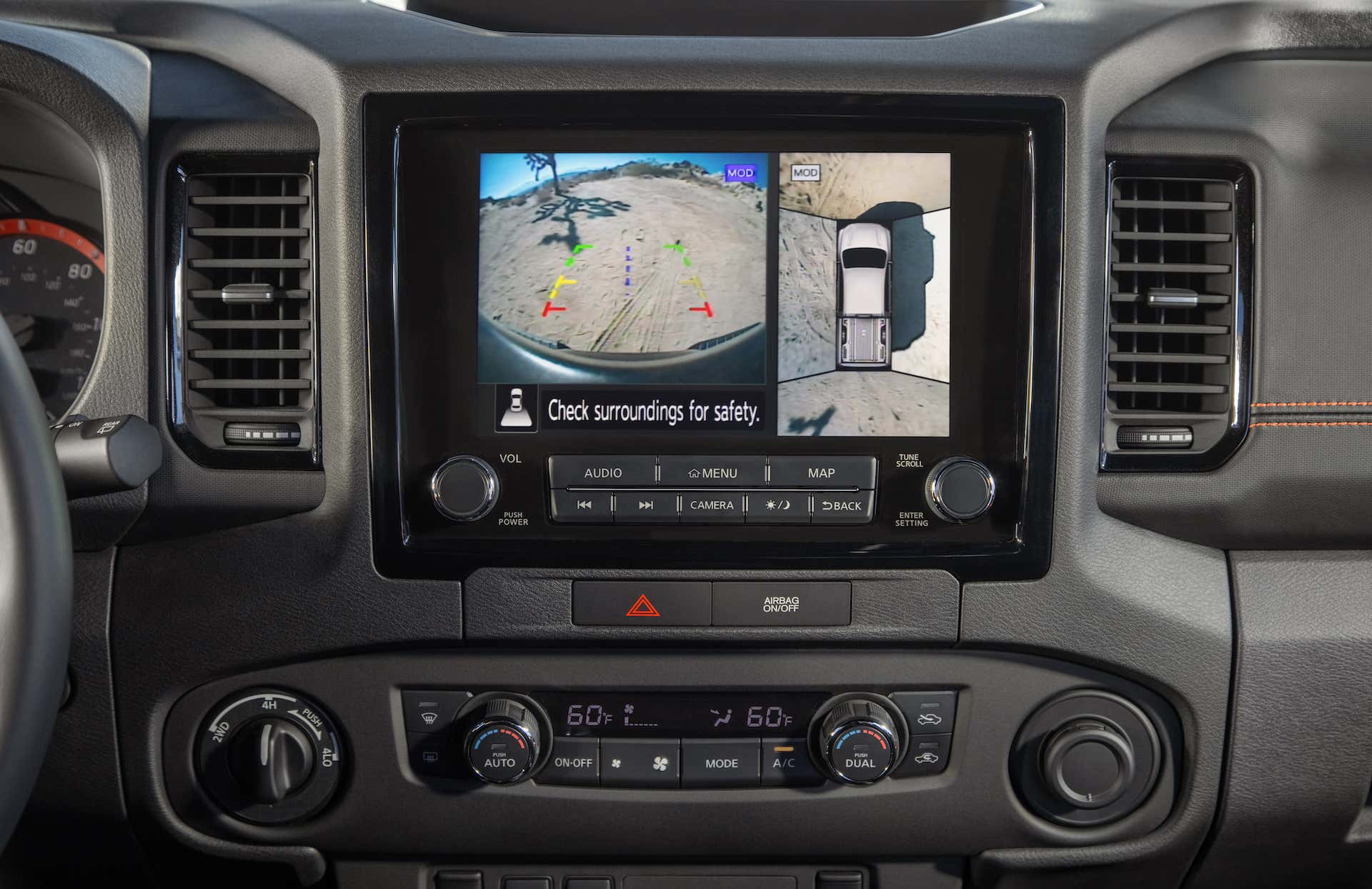 The new Frontier will be the first Nissan to get the company’s Intelligent Around View Monitor with Moving Object Detection as well as Off-Road Mode. The former uses four exterior cameras to piece together a bird’s eye view while the latter engages at low speeds in 4LO and essentially replaces a human spotter.

Like what you see? Available as a king or crew cab, the 2022 Nissan Frontier will go on sale this summer. 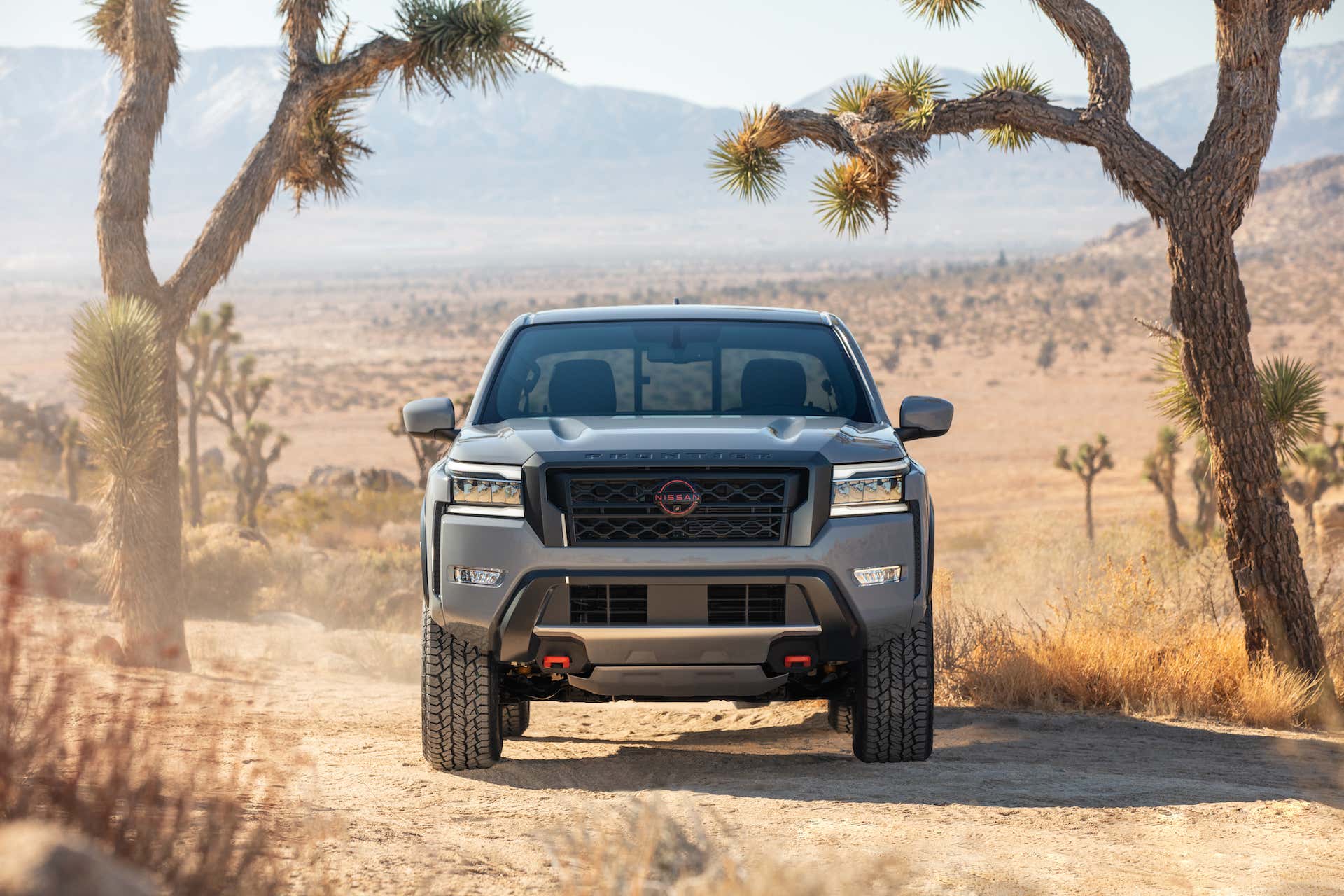