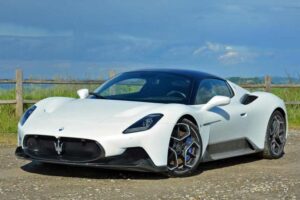 Maserati’s days of living in Ferrari’s shadow are over. Unveiled in 2020 and 16 years after the track-bred MC12 made its debut, the mid-engine Maserati MC20 is one of the quickest Maserati models to date and the car that will spearhead the firm’s return to racing.

Both of these points are noteworthy, especially after a generation of sedans and SUVs chiefly focused on luxury, but the MC20’s importance transcends performance. It’s the first fruit of a far-reaching overhaul that sets the course Maserati’s future models will follow. 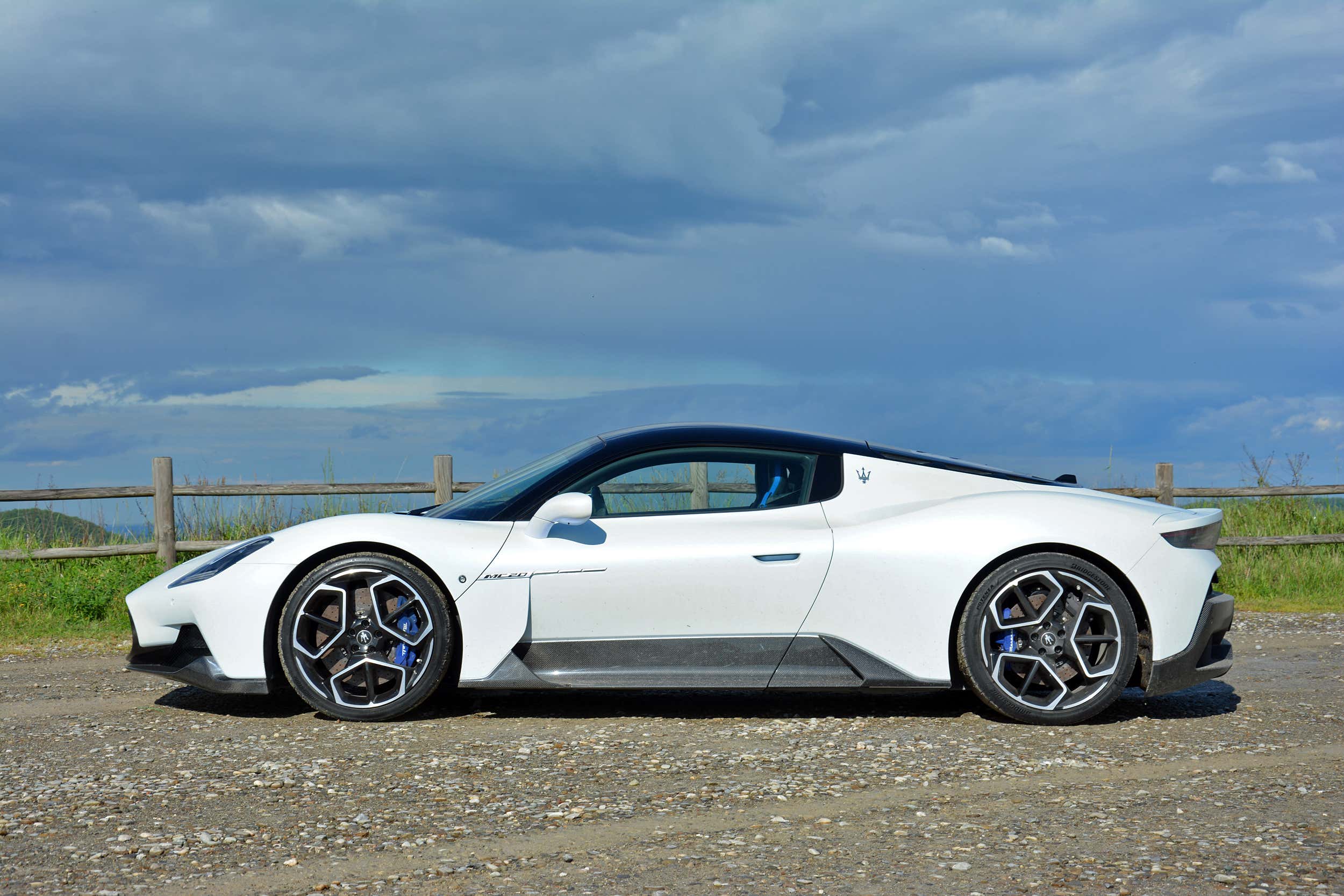 The Ring and the Diamond

Maserati has 107 years of car-building experience and numerous mid-engined models on its resume, yet it wasn’t equipped to develop and manufacture the MC20 until very recently. Using the Ferrari-derived V8 that powered the GranTurismo—and several other cars—was out of the question because it’s nearly 20 years old.

Phoning Maranello to ask for another engine hasn’t been an option since Ferrari left the Fiat-Chrysler Automobiles (FCA, now Stellantis) nest in 2016. And none of the platforms in Stellantis’ existing portfolio were capable of underpinning a low-slung supercar; engineers envisioned something bigger, more powerful, and more expensive than the Alfa Romeo 4C. Consequently, they had to start from scratch, a process that required injecting a tremendous number of resources into Maserati’s historic factory. 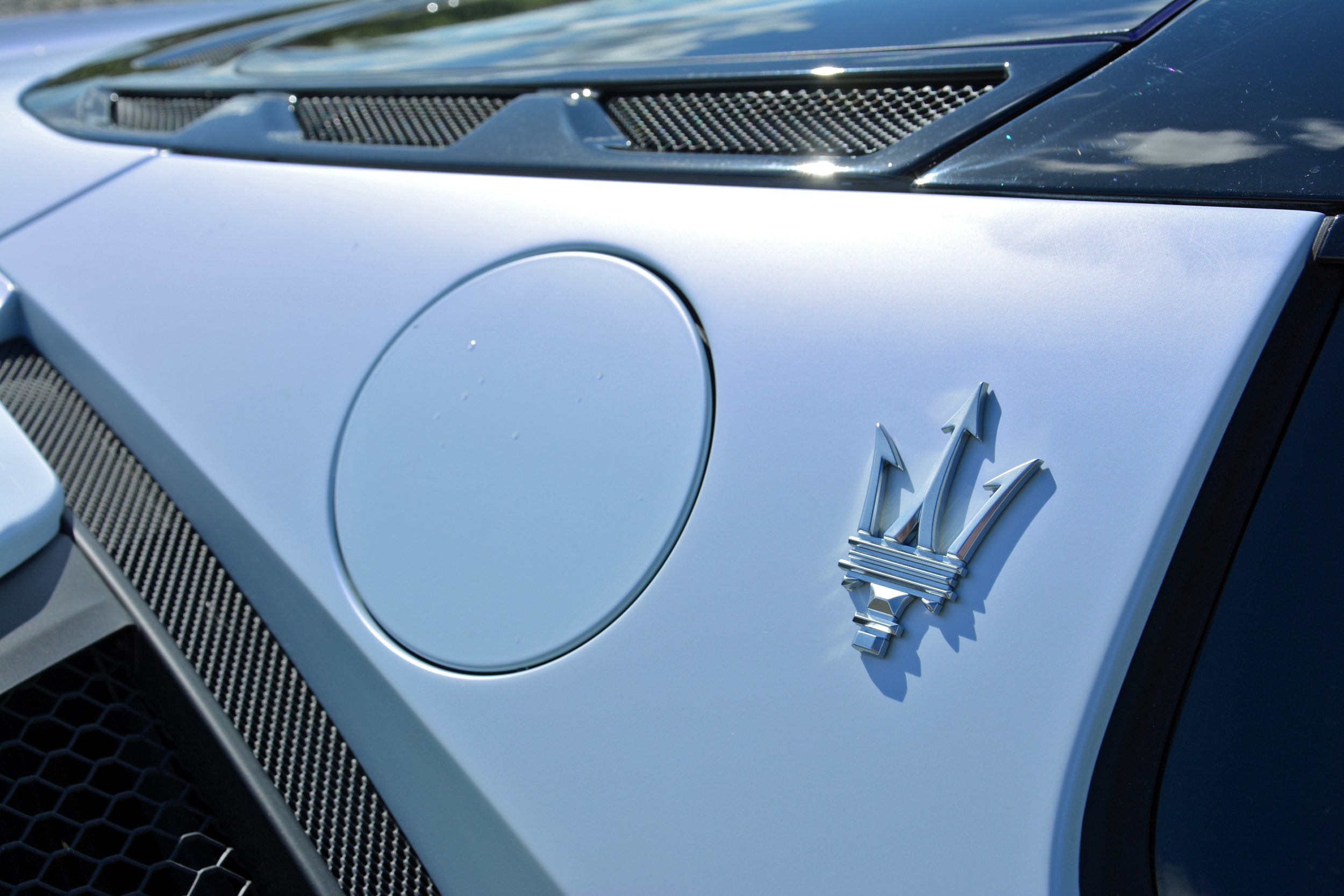 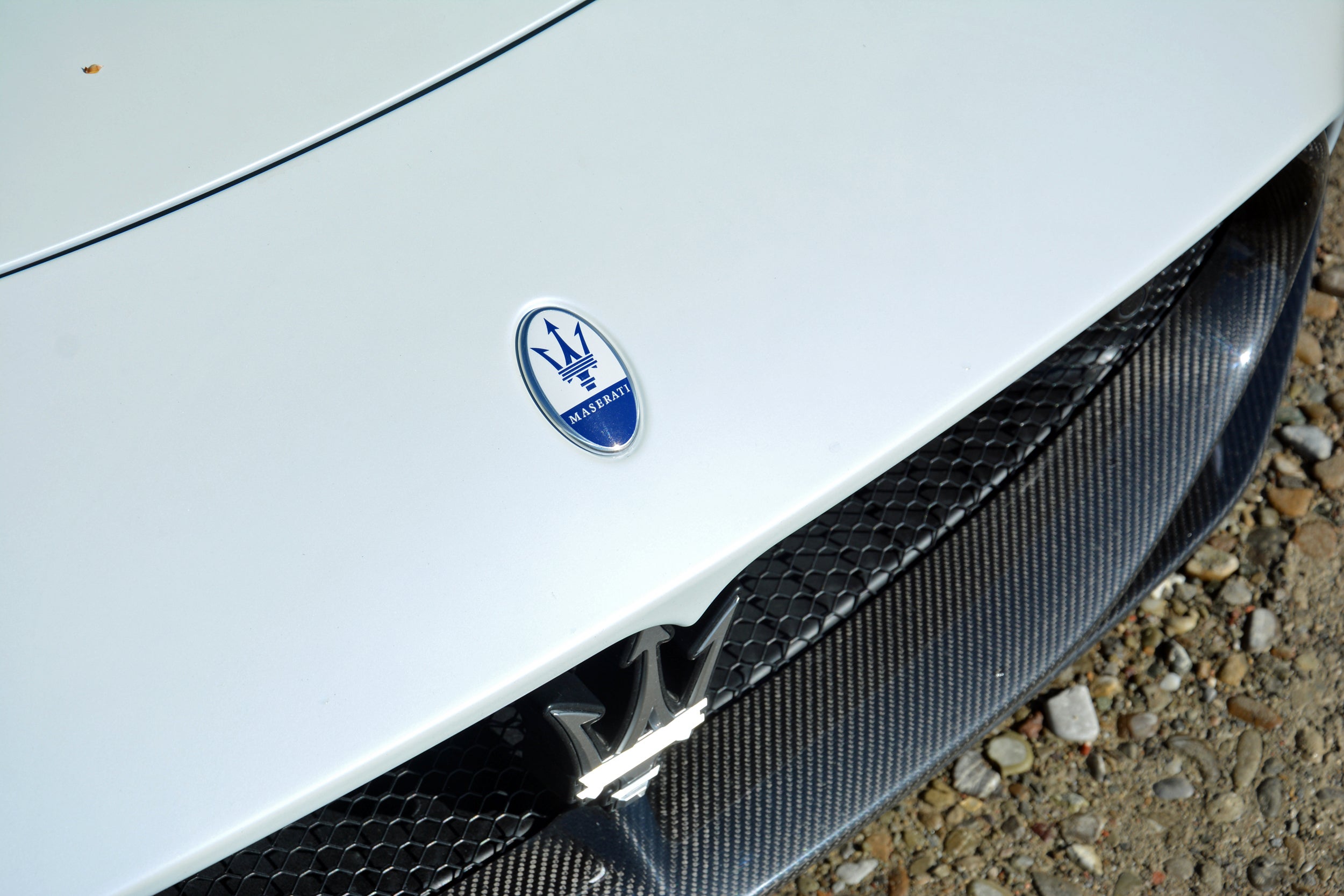 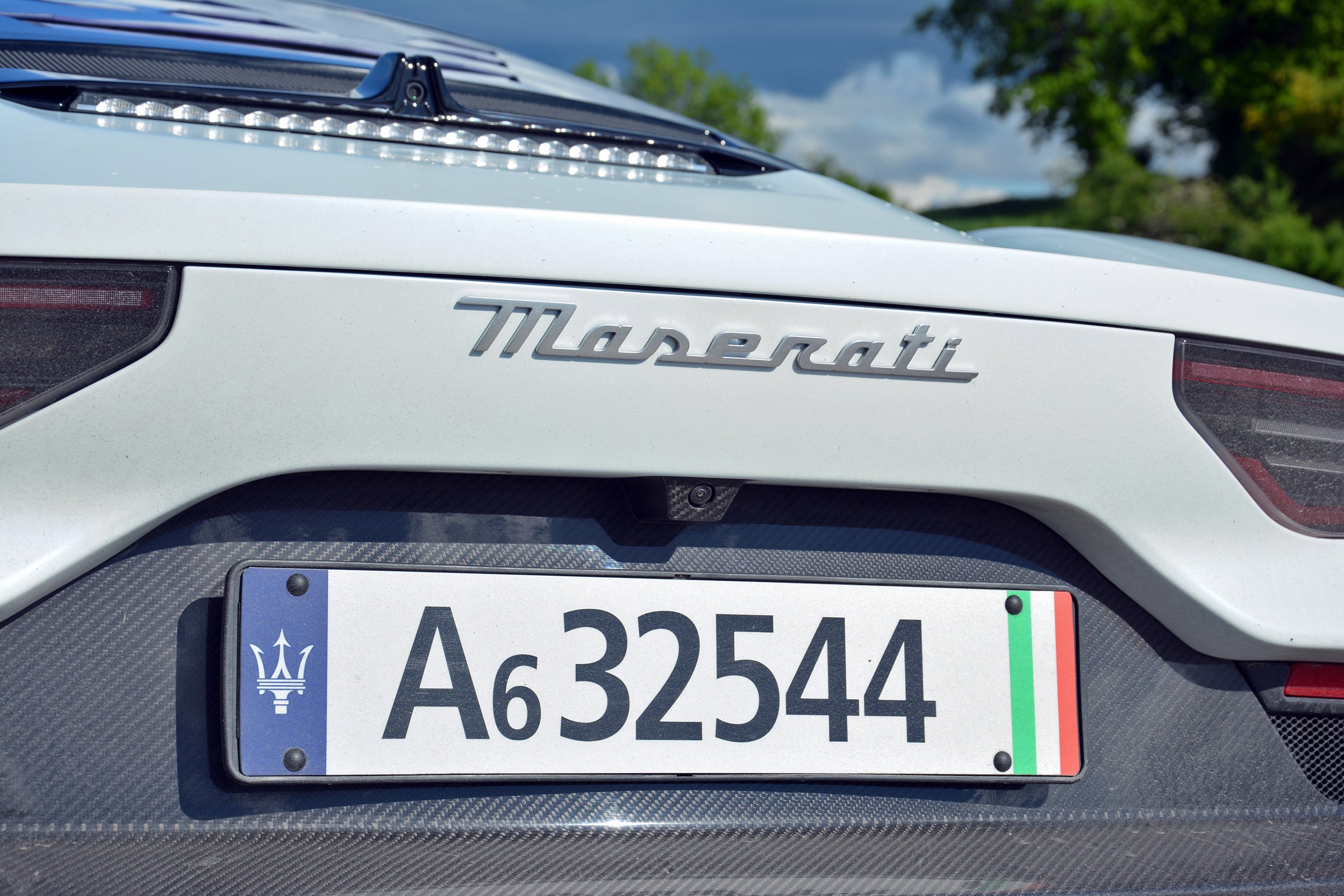 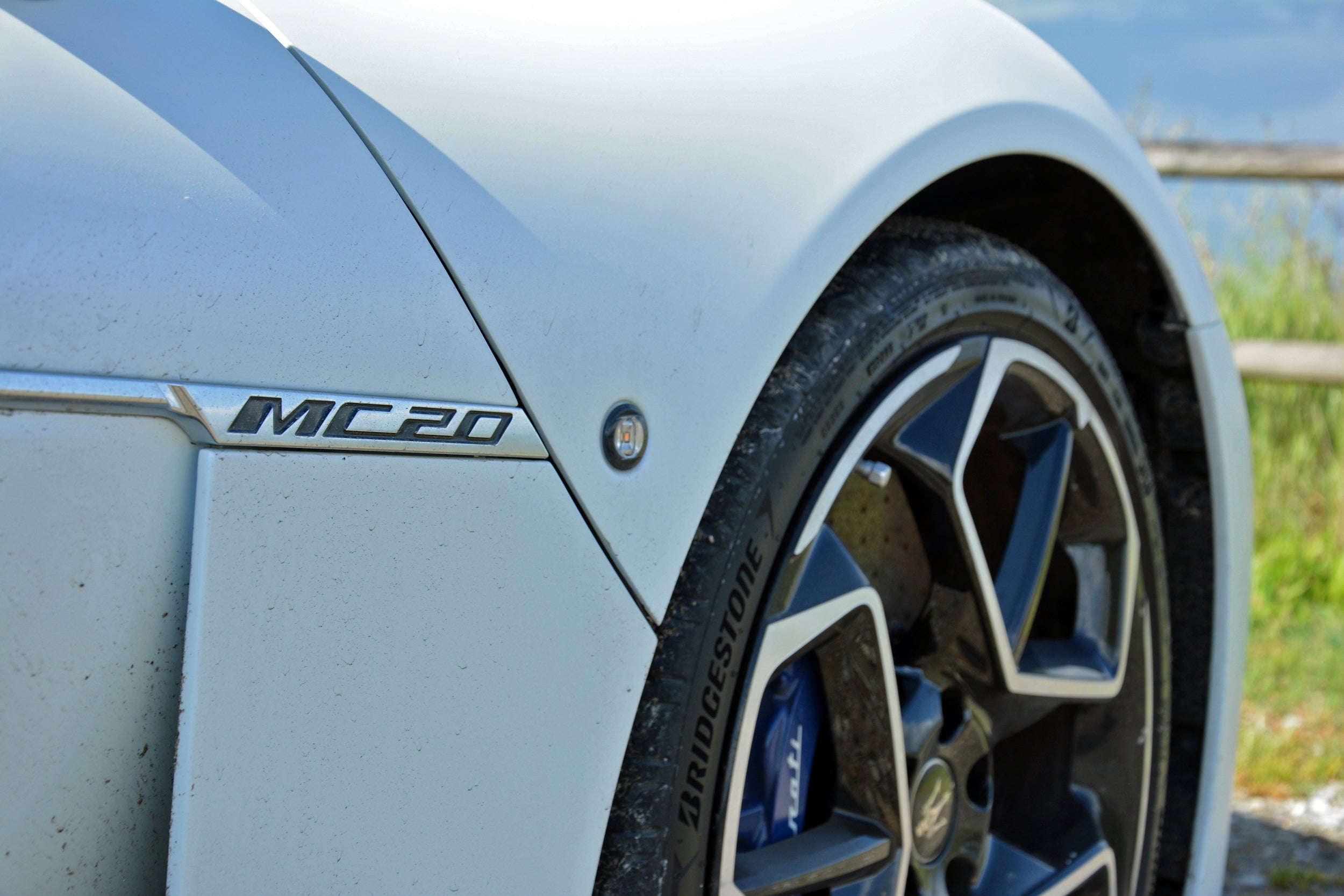 Working with a simulator to save time and money, Maserati developed the MC20 around a new carbon fiber monocoque onto which aluminum sub-frames are attached. The upcoming convertible and electric variants will use this monocoque, too, though offsetting the EV’s weight will require using thicker carbon fiber. Meanwhile, designers penned a pure, fluid silhouette without bench-sized wings or other overly aggressive-looking aerodynamic add-ons. Butterfly doors add a finishing touch to the exterior design.

“Launching the MC20 without giving it a suitable engine would be like buying a beautiful ring without a diamond,” explained Federico Landini, the man who led the team in charge of the MC20’s development.

In this case, the diamond is a 3.0-liter, 90-degree V6 called Nettuno that’s twin-turbocharged and fitted with direct and indirect fuel injection systems. It’s a dry-sump unit that develops 621 horsepower at 7,500 rpm and 538 pound-feet of torque at 3,000 rpm. For context, the Lamborghini Huracán Evo posts figures of 631 and 443, respectively, but it uses four more cylinders, no turbos, and 2.2 additional liters of displacement. Landini noted the twin-injection tech allowed Maserati to get by with a smaller engine. 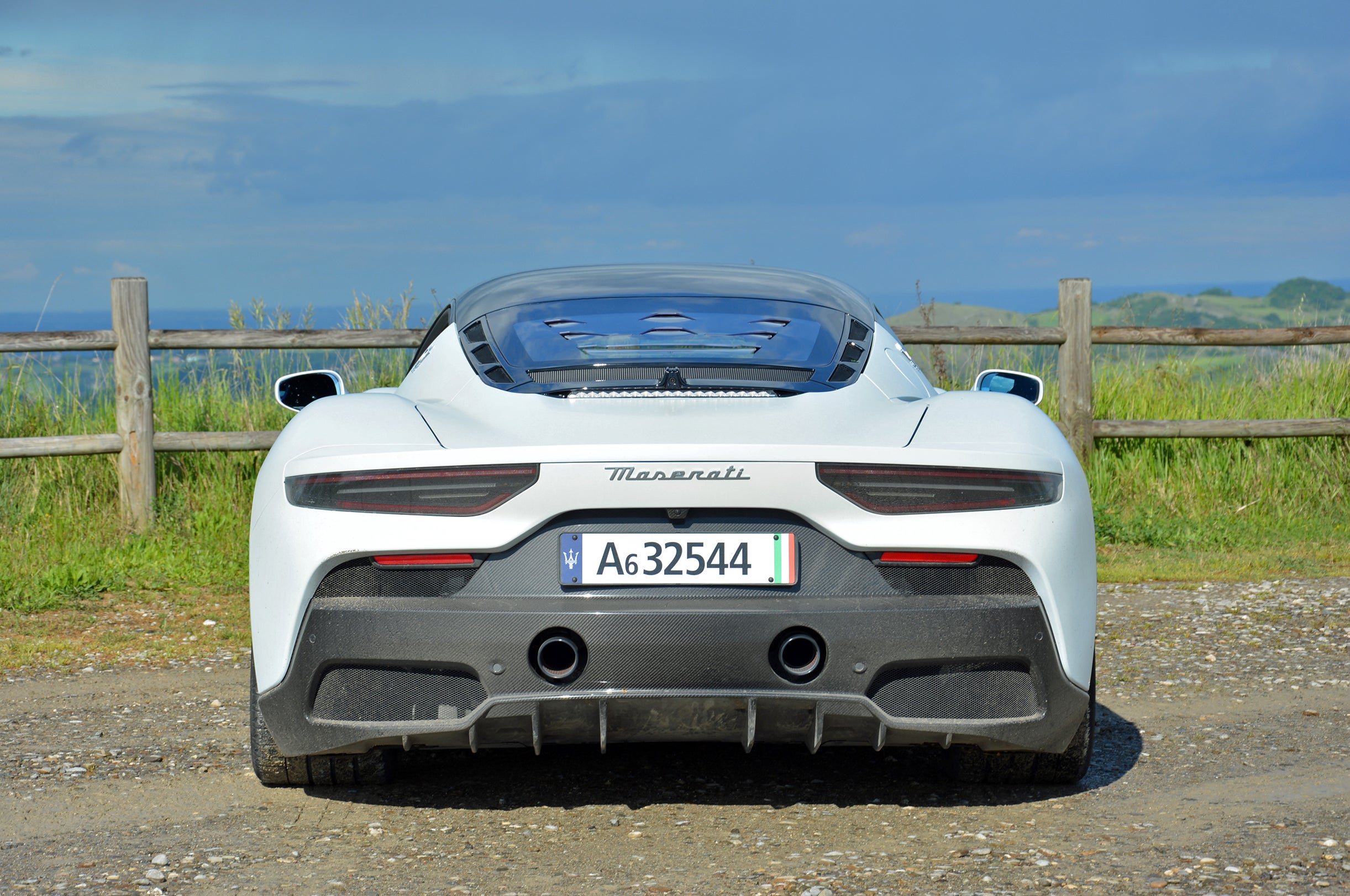 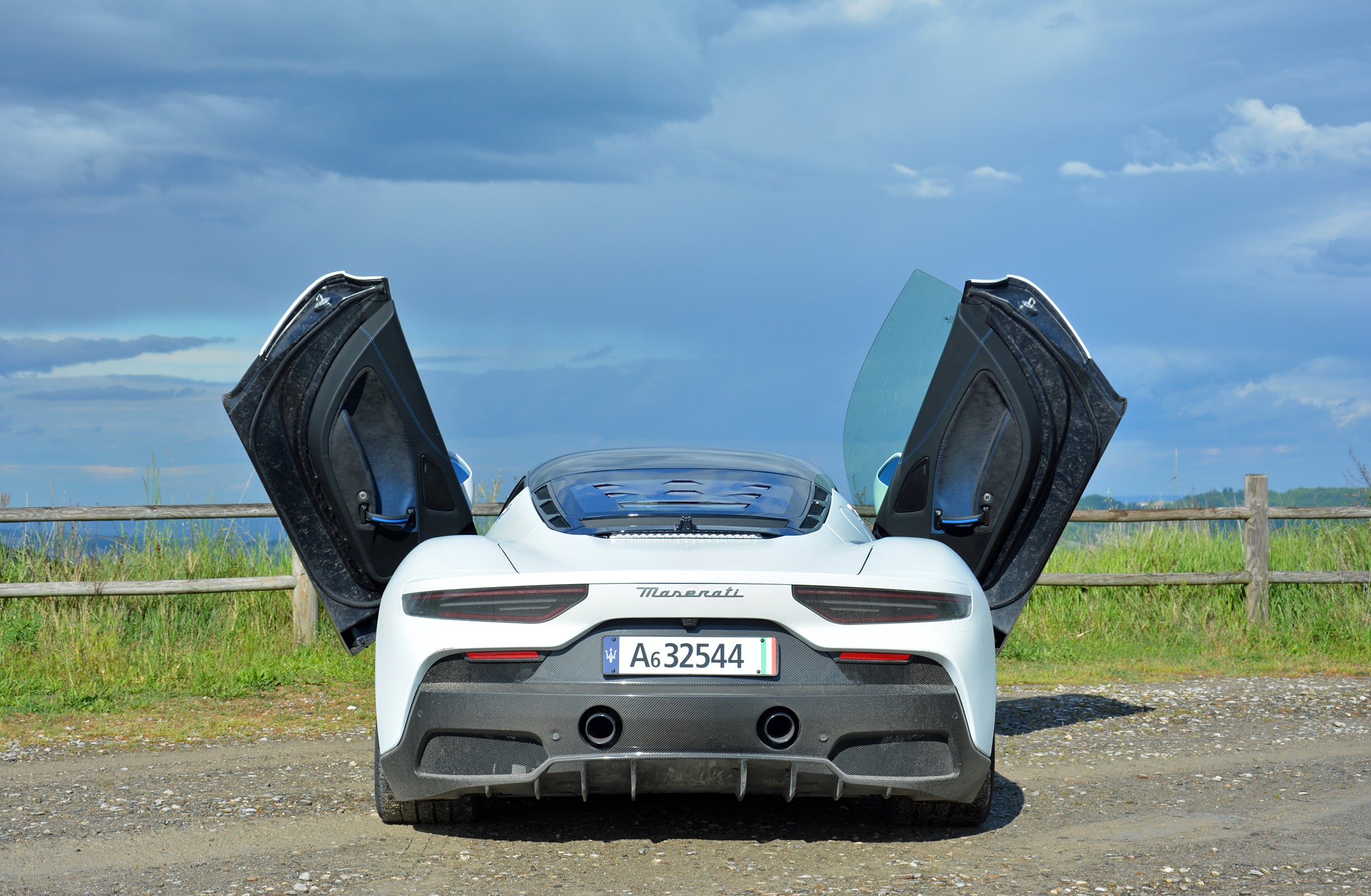 Suppliers weren’t completely left out of the equation. Dallara helped design the monocoque and its wind tunnel allowed Maserati to sculpt the MC20’s 0.38 drag coefficient. Tremec provided the eight-speed dual-clutch automatic transmission. It’s the same basic unit found in the eighth-generation Chevrolet Corvette, though it’s tuned to make the most of the twin-turbocharged Nettuno V6’s HP and torque bands, which unsurprisingly look nothing like the naturally-aspirated LT2 V8’s.

Giving the MC20 conventional doors would have flown directly into the teeth of unwritten supercar etiquette. Maserati openly admits the “Mamma mia!” factor largely shaped the direction in which the panels open, but butterfly doors also make the coupe easier to get into by reducing the width of its sills. Once inside, the driver faces a three-spoke steering wheel with paddles for the quick-shifting eight-speed gearbox, a 10.25-inch “Thin Film Transistor” digital instrument cluster, and a 10.25-inch touchscreen for the infotainment system. Here again, purity won the battle against complexity in the design department.

Don’t get the wrong idea: The MC20 isn’t a stripped-out track rat, either. In spite of all the talk about the dry-sump V6 and widespread use of carbon fiber, it manages to strike a balance between comfort and performance that’s uncommon in the supercar segment. It’s not too harsh or too gentle, regardless of whether you’re on a crowded highway or on a mountain road dominated by Fiat hatchbacks. It’s blisteringly quick in a straight line, with the V6 screaming its even-firing anthem at the top of its lungs over the chorus of the turbos spooling, but it’s best enjoyed when the road looks like cooked spaghetti. 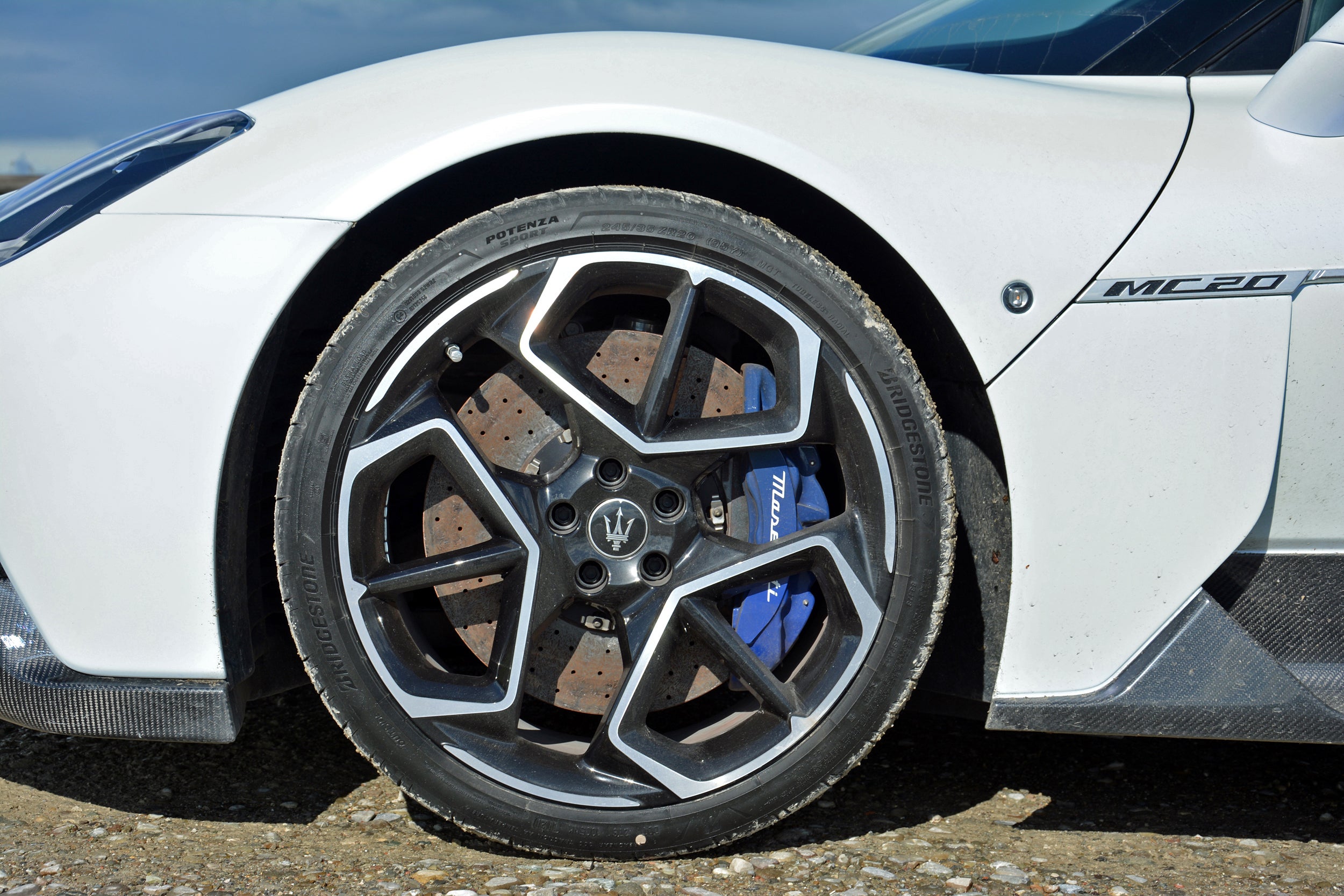 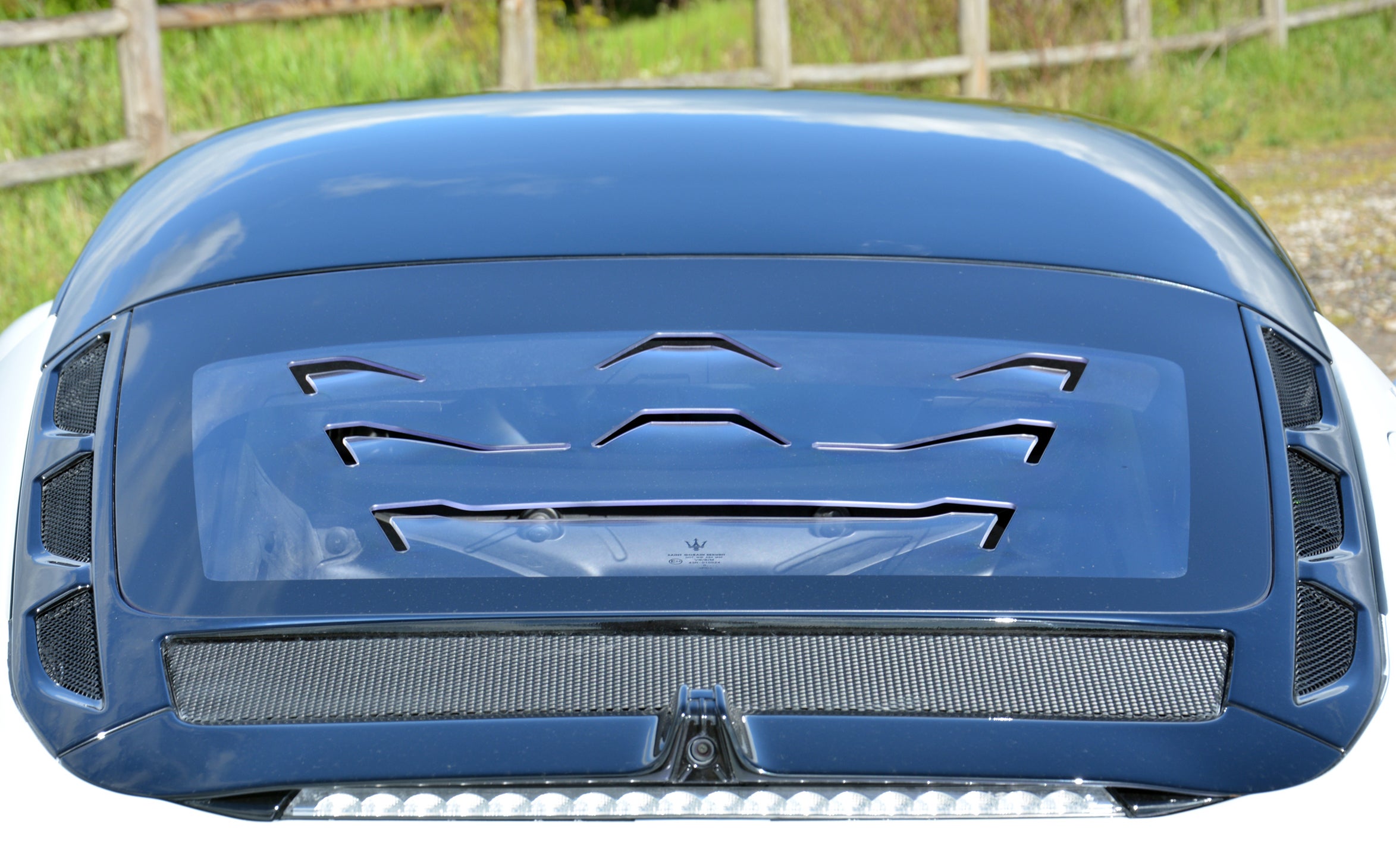 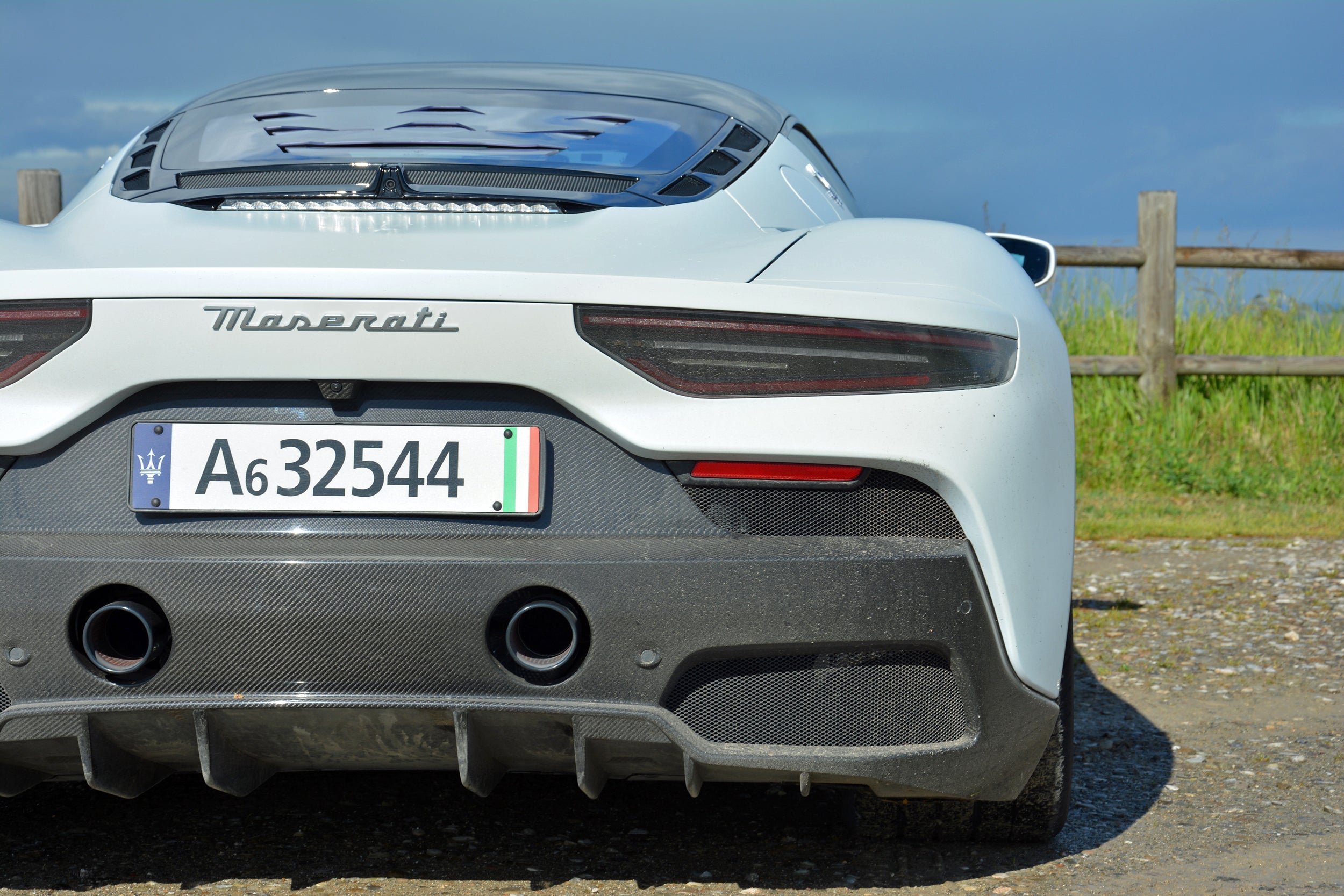 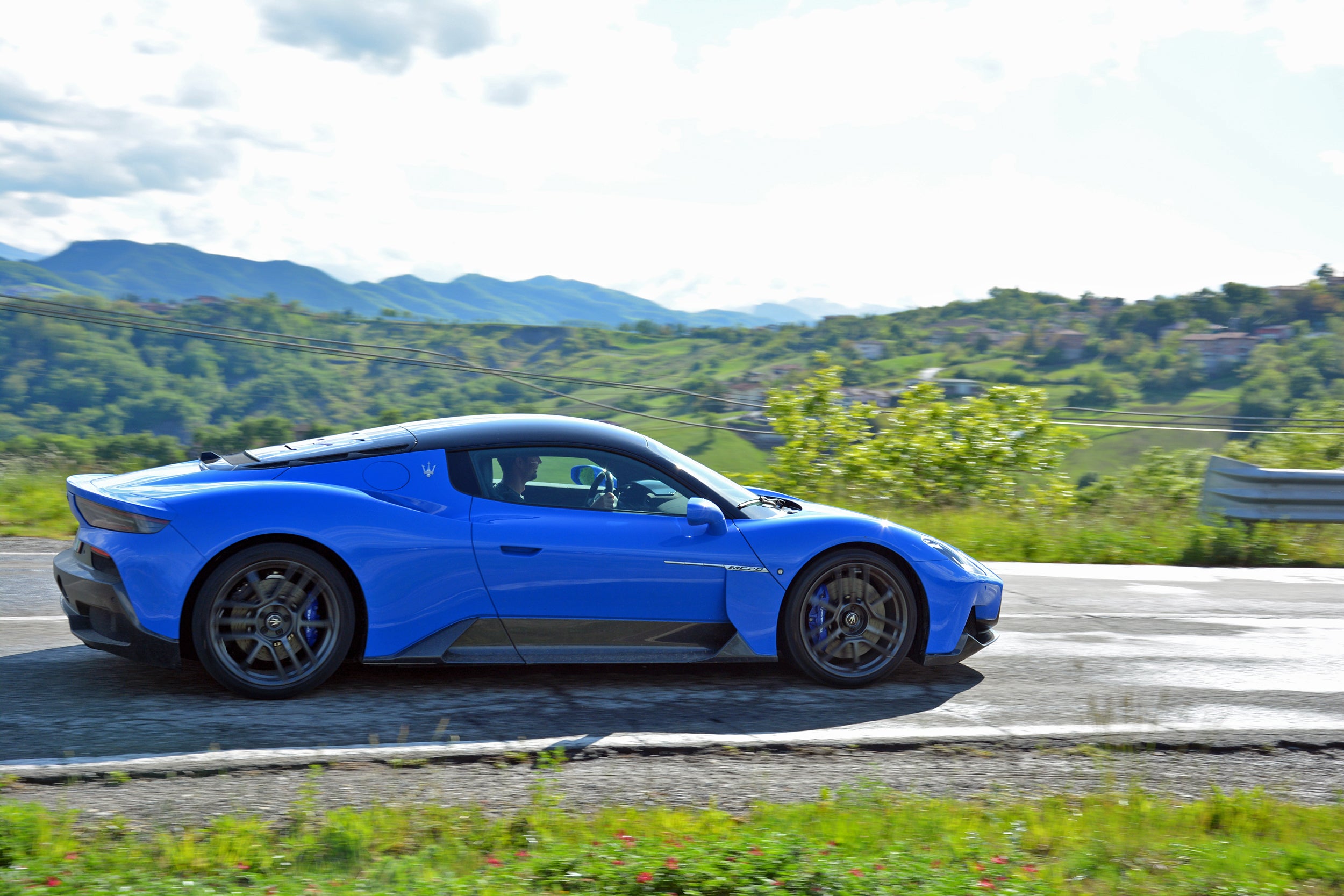 Any apprehension about pelting a V6-powered model into a segment dominated by engines with eight or more cylinders disappears in the digital rear-view mirror after a jaunt in the hills. While downsizing brings a bag of controversies with it, it also reduces the MC20’s weight and distributes it more evenly—Maserati quotes a 42:58 front-rear weight distribution. Mounting the V6 low in the engine bay and strapping the turbos onto its outer edges (rather than between the two cylinder banks) lowers the center of gravity, helping create what’s undoubtedly the best-balanced car Maserati has ever delivered. If you’re used to the GranTurismo, the MC20 feels like it’s drawn from the depths of the Lotus range.

Steering is the MC20’s best attribute. The system provides a near-superstitious amount of feedback that makes placing the front wheels exactly where you want them a breeze. It’s a quality that’s often lost in modern performance cars, and one that gives the MC20 the ability to run alongside the best in its class.

Brembo designed the braking system, which consists of 15-inch rotors gripped by six-piston calipers on the front axle and 14-inch rotors and four-piston calipers out back. The brakes slow the MC20 with a reassuring “hang on, we got this” attitude; anything less would set off a five-alarm panic in the cabin. 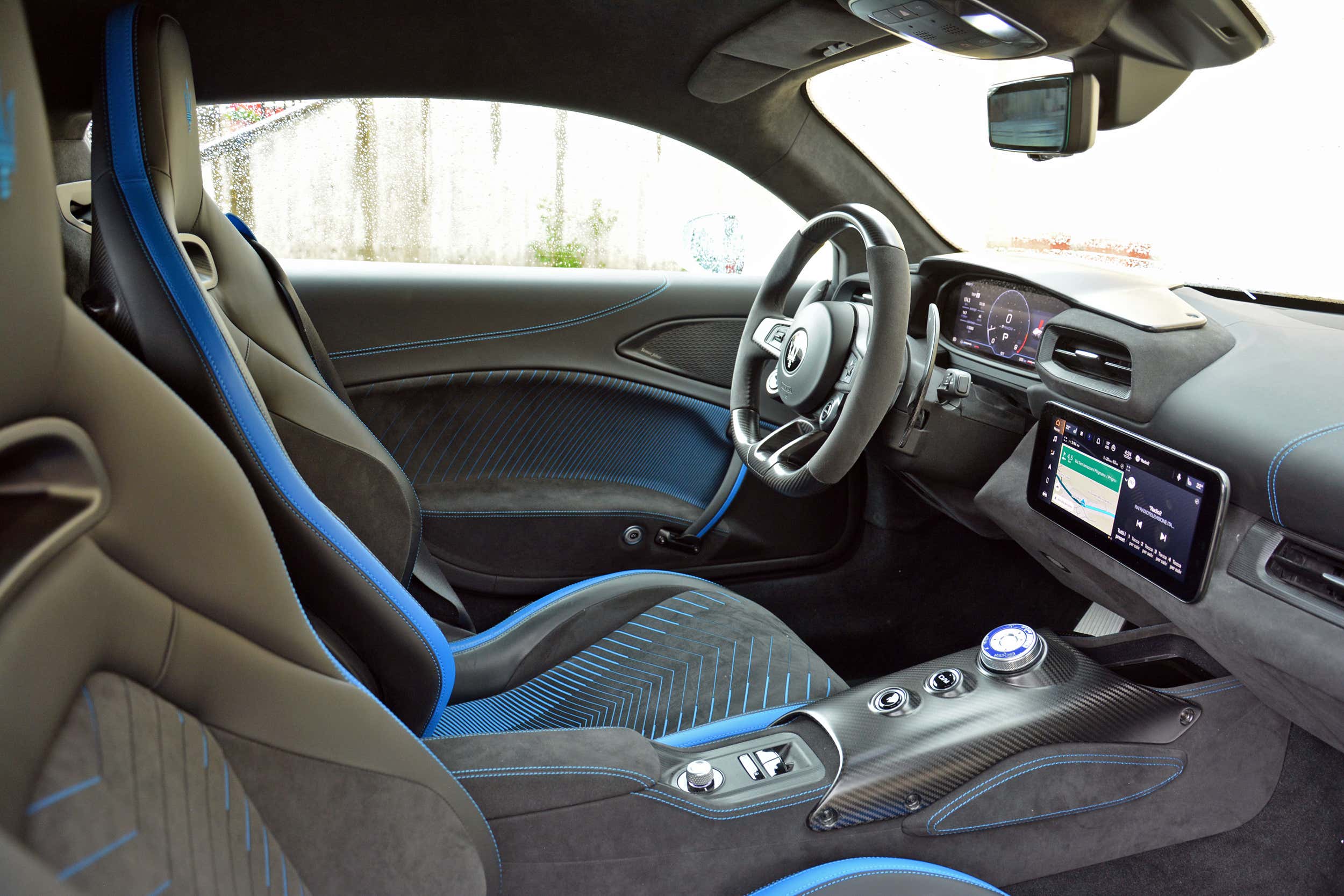 Great steering, a sonorous engine that provides about 310 HP per seat, a well-tuned chassis, and strong brakes are what you want when you’re lead-footing your way to the next town, but these traits become little more than a sideshow if you’re driving the MC20 to buy groceries and a cup of coffee. And, since it’s marketed as an everyday supercar, the odds are high that it will end up in greatly mundane conditions. It can tackle them, too.

Maserati programmed four driving modes called GT, Sport, Corsa, and Wet, respectively. The MC20 always starts in GT; leaving it there keeps the exhaust system relatively quiet and takes some of the edge off of the throttle’s response. Don’t go overboard with the errands, though: there’s one espresso-sized cupholder in the cabin, and trunk space is largely symbolic.

Let loose on the track, the MC20 is in its element. The V6’s nearly lag-free power delivery and the quick, precise steering make it relatively predictable and hugely entertaining to drive. You don’t need to have Lewis Hamilton’s trophy case in your living room to confidently take it on, there’s nothing intimidating about it. The carbon-ceramic brakes in the car Maserati loaned me to drive on the track were worse for the wear after several laps of the Autodromo di Modena, so I can’t comment on their performance. 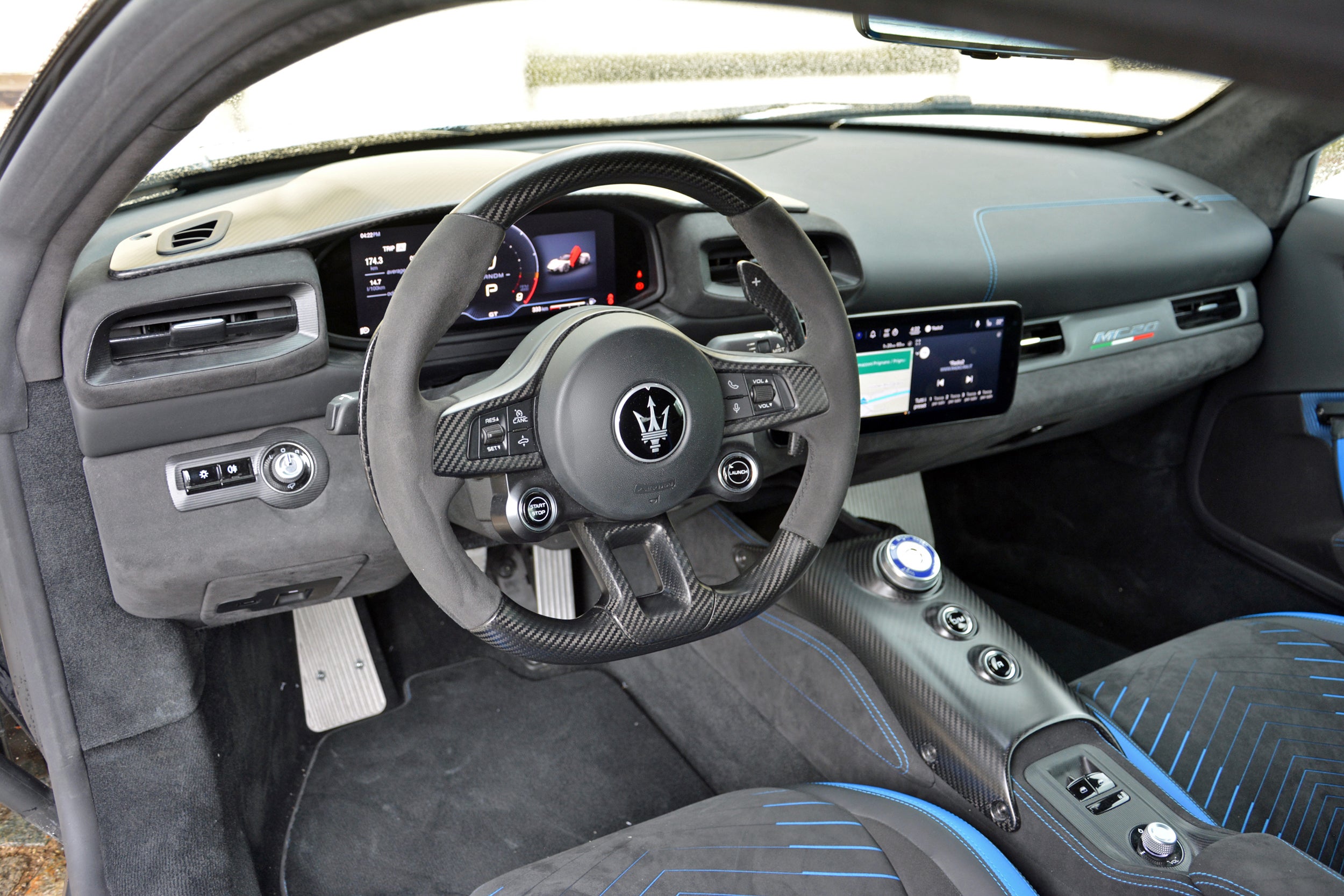 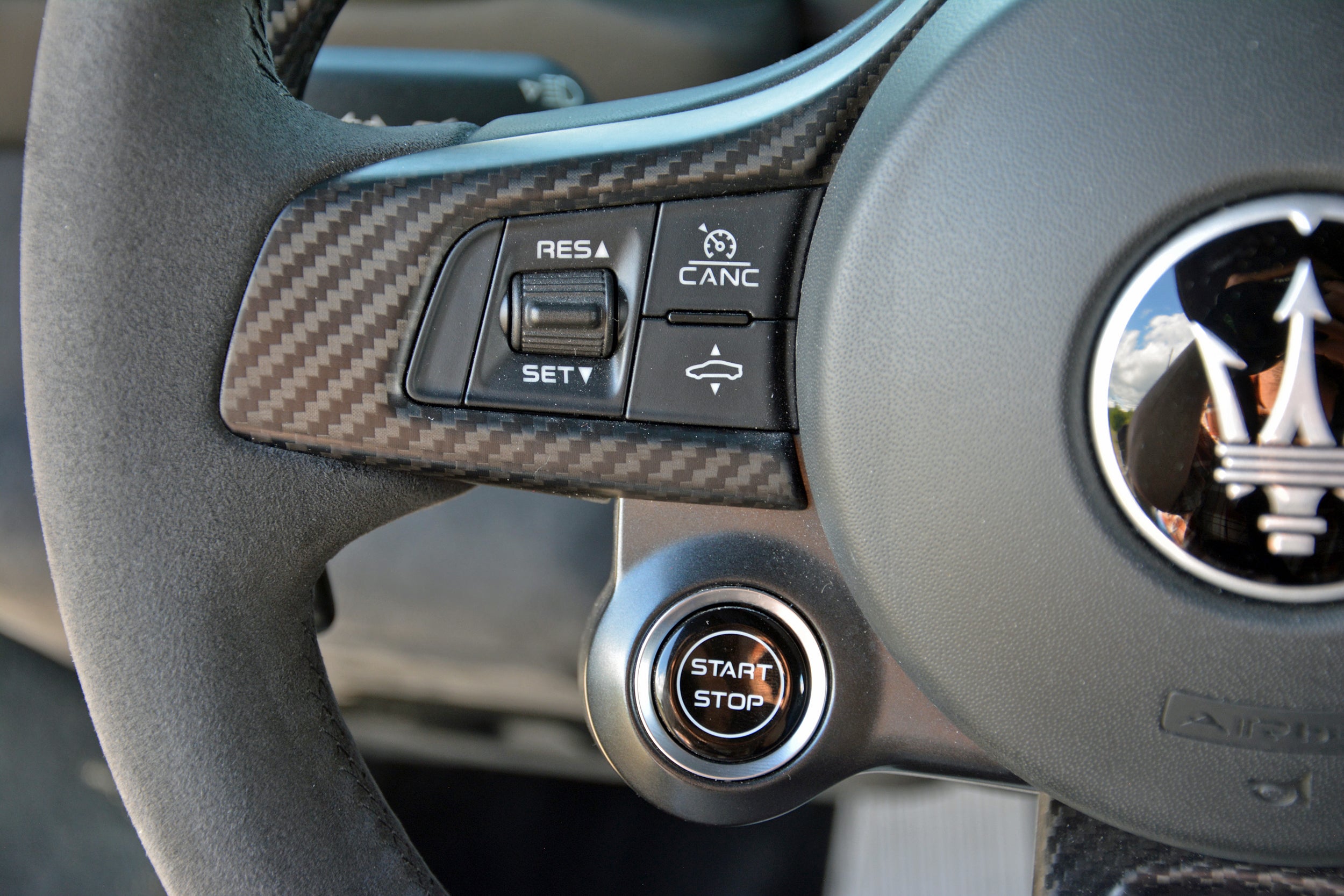 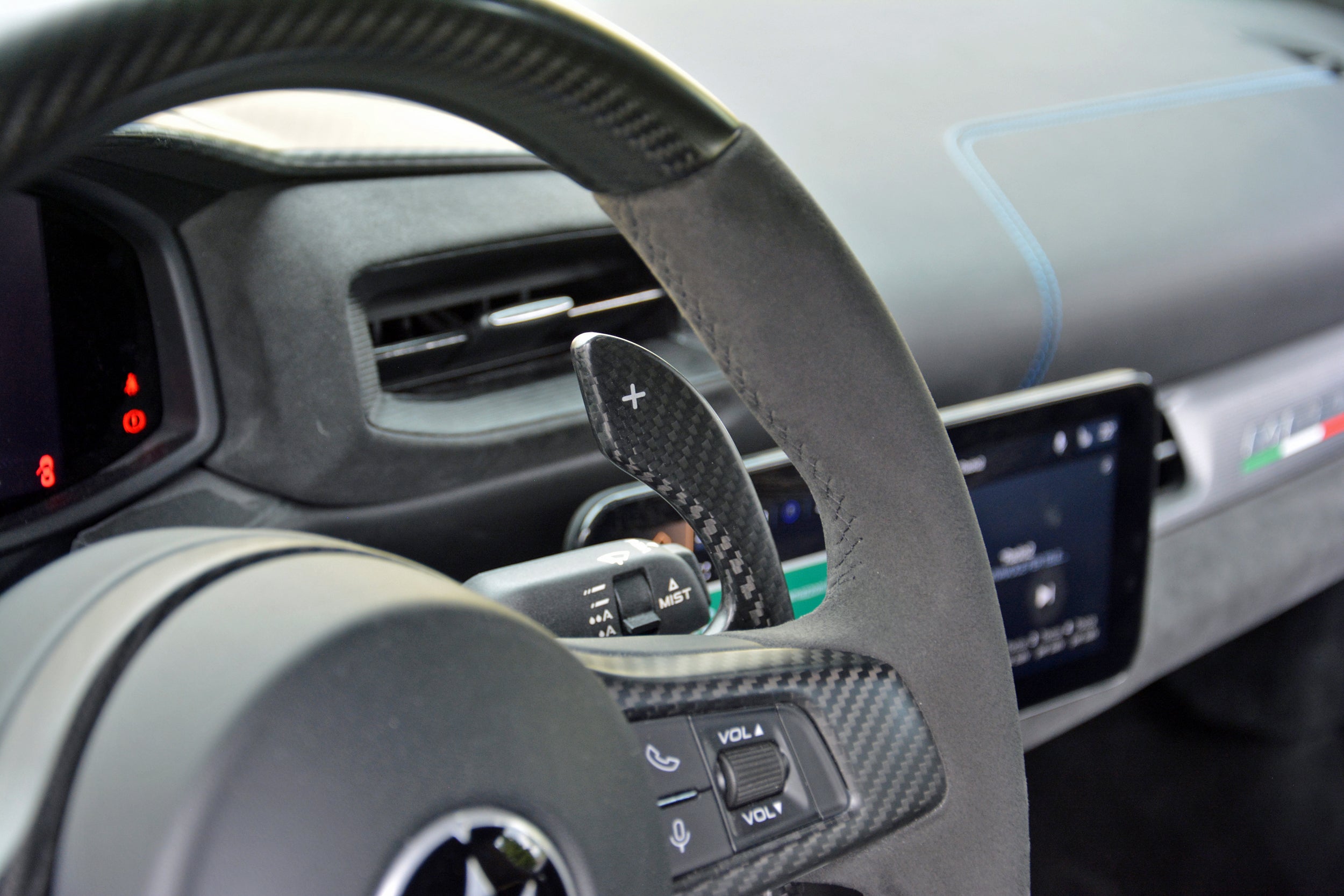 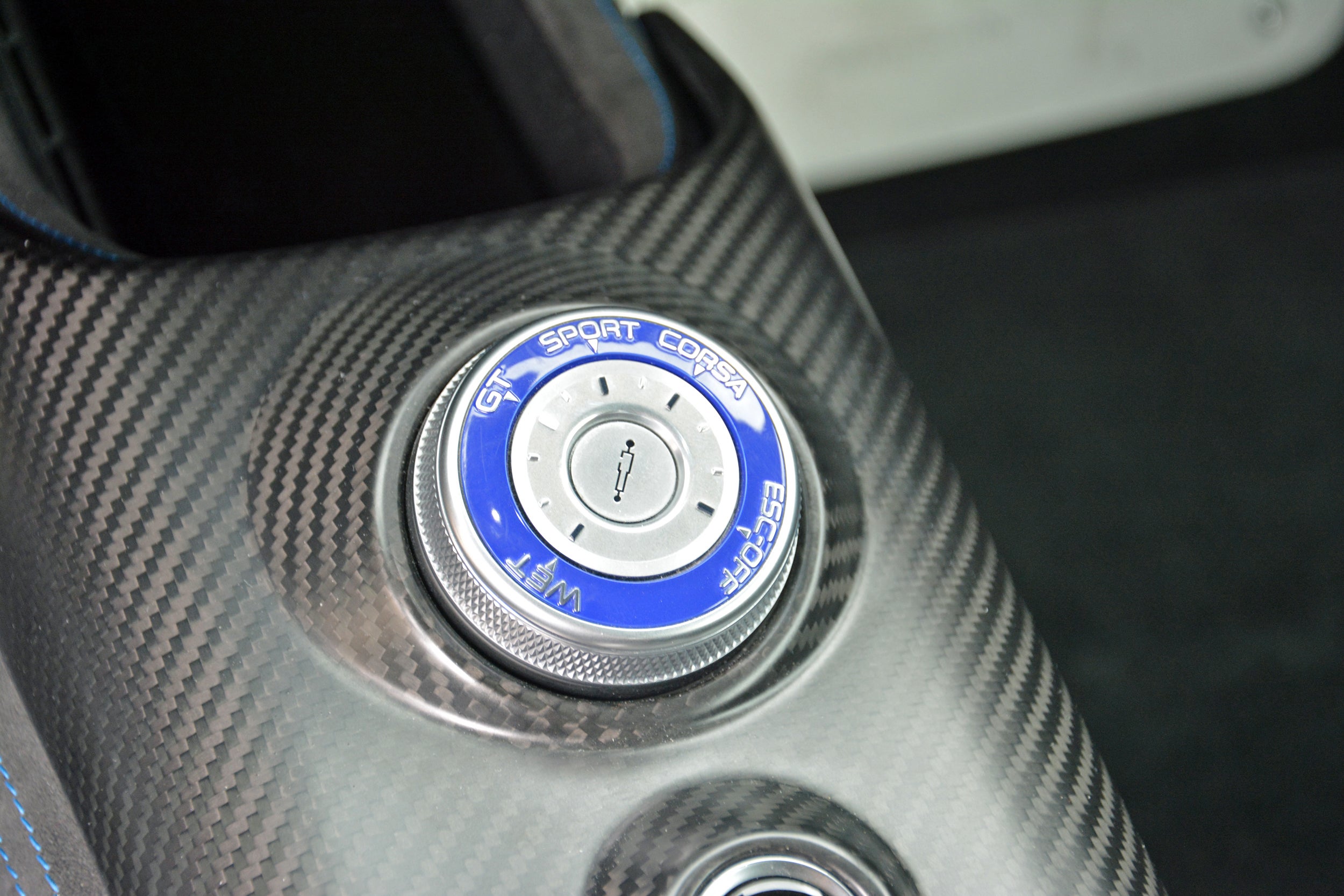 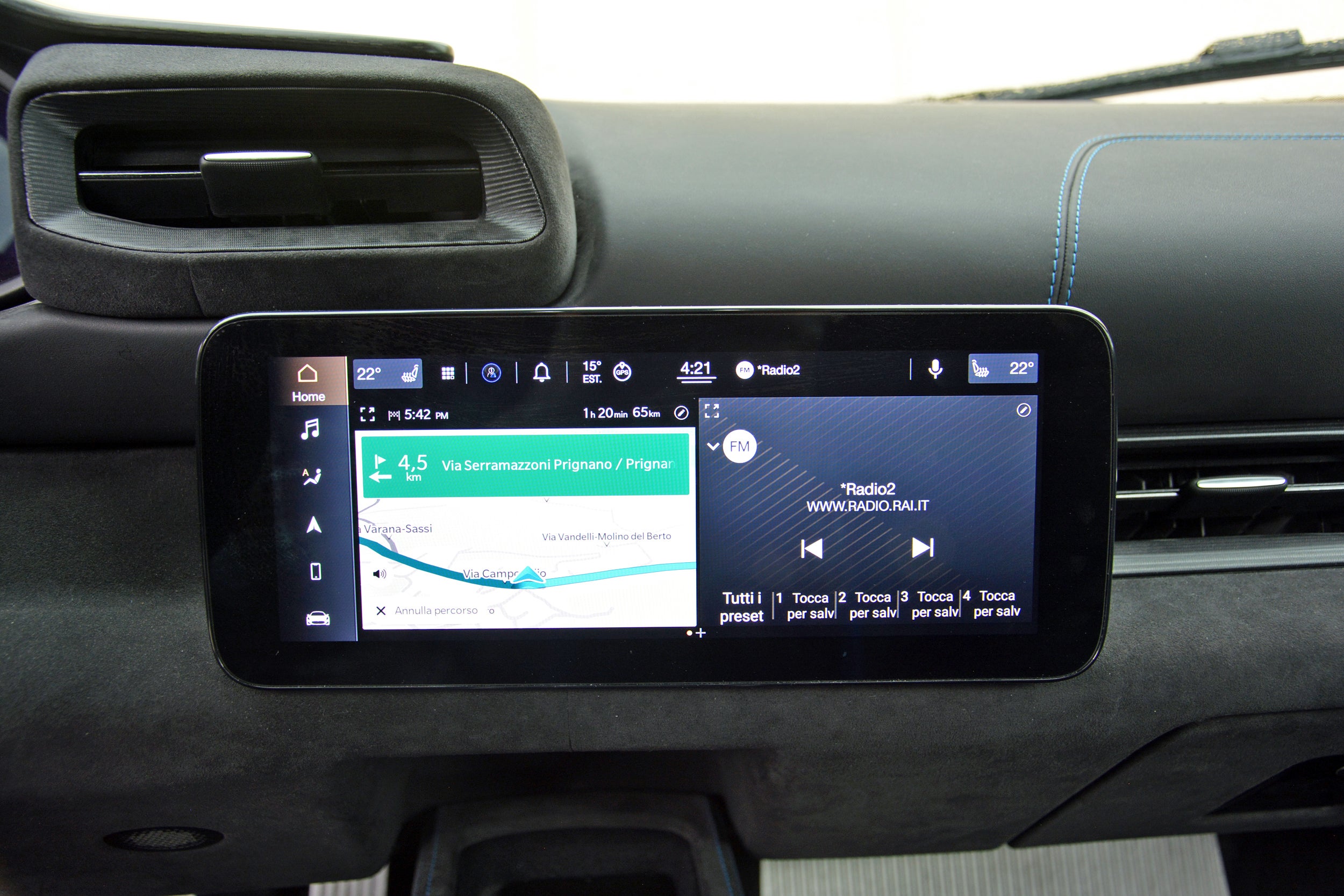 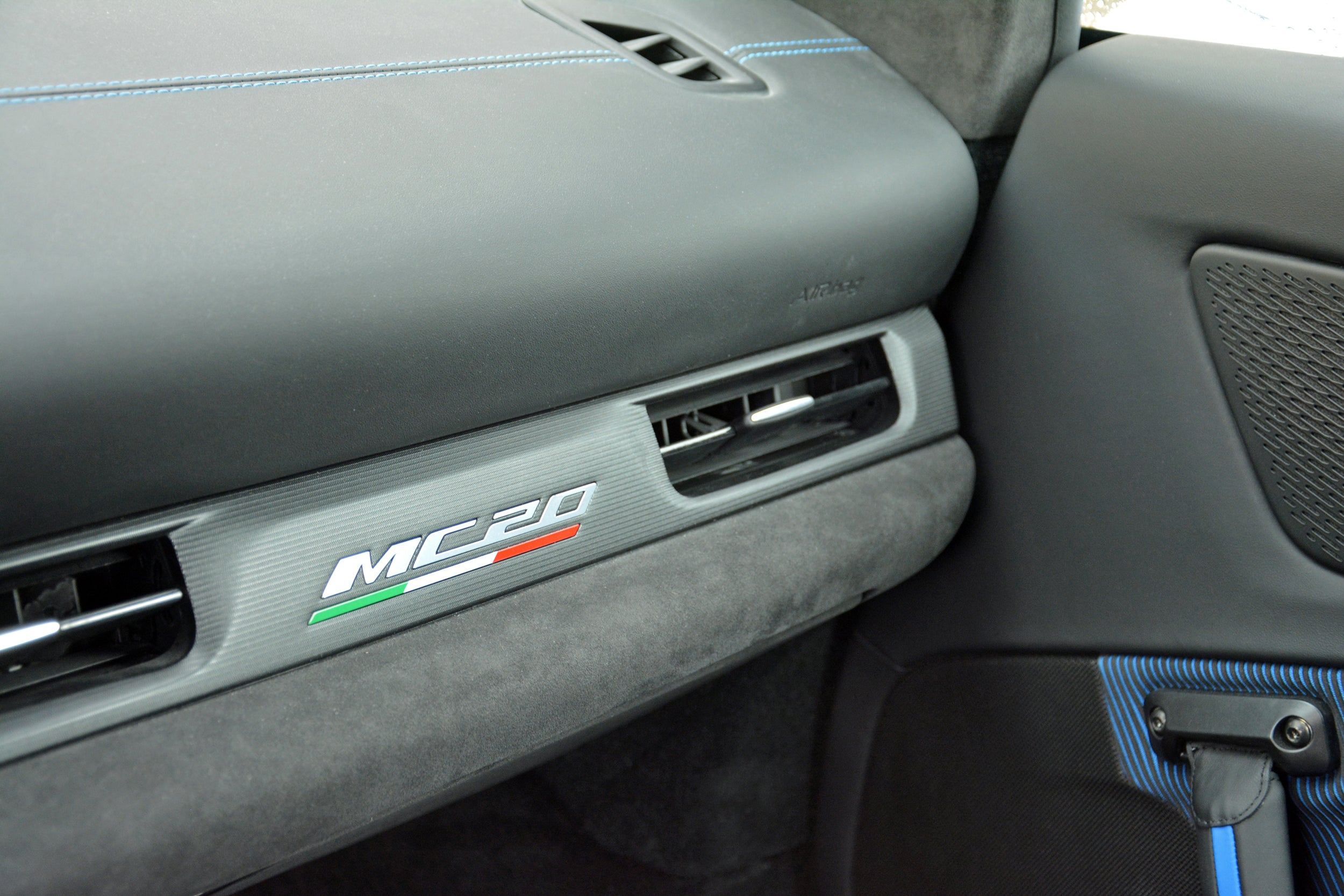 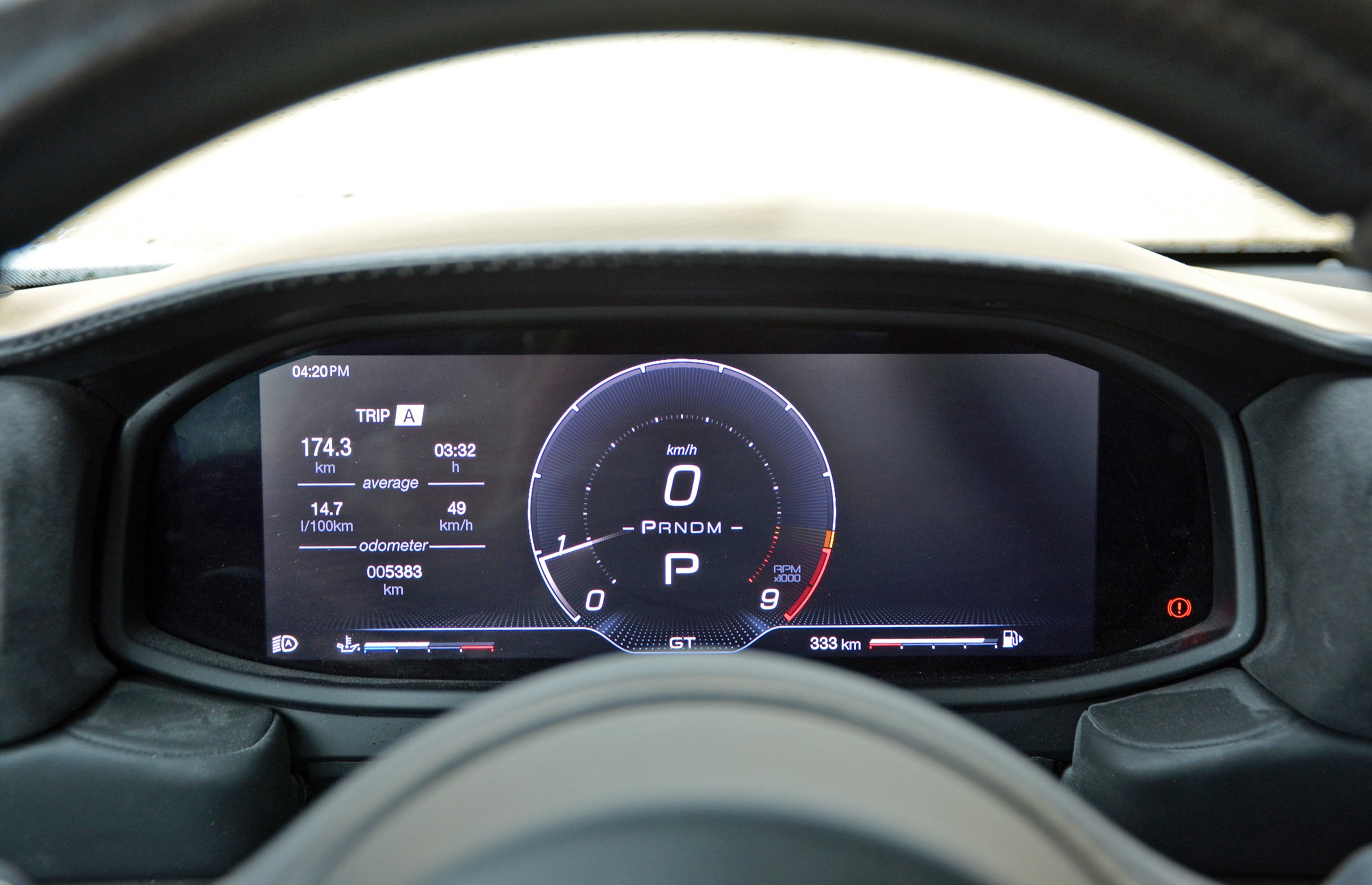 Quirks play an important role in defining an Italian supercar’s character, and the MC20 brings a few to the table. Changing the track or the radio station is done using the touchscreen or with a knob located close to the driver’s hip. Operating it requires an unusual amount of wrist gymnastics. Speaking of, the touchscreen is propped up low on the center stack, far from the driver’s line of sight. In its defense, the graphics are sharp, and the software it displays is straightforward to operate. Engaging the split-screen function didn’t require a degree in computer science or a lengthy chat with the folks who created it.

Quick, engaging, and elegant, the Maserati MC20 is damn good. It proves an Italian supercar doesn’t need to have a bull or a horse on its nose to be taken seriously, and it’s even more remarkable considering it was developed in about two years by a company whose heritage isn’t rooted in mid-engined cars. It’s also a testament to how far internal combustion technology has come in the past 20 years; the 3.0-liter V6’s 621-HP output is almost exactly on par with the MC12’s 6.0-liter V12.

On a secondary but more lasting level, the MC20’s pure approach to design will permeate the rest of the portfolio, including the Macan-sized Grecale crossover expected to land before the end of 2021. And while no one in Modena would tell me precisely what (if anything) the future has in store for the 3.0-liter Nettuno engine, Landini did say the twin-injection system can be applied to other engines regardless of cylinder count or displacement with relative ease. 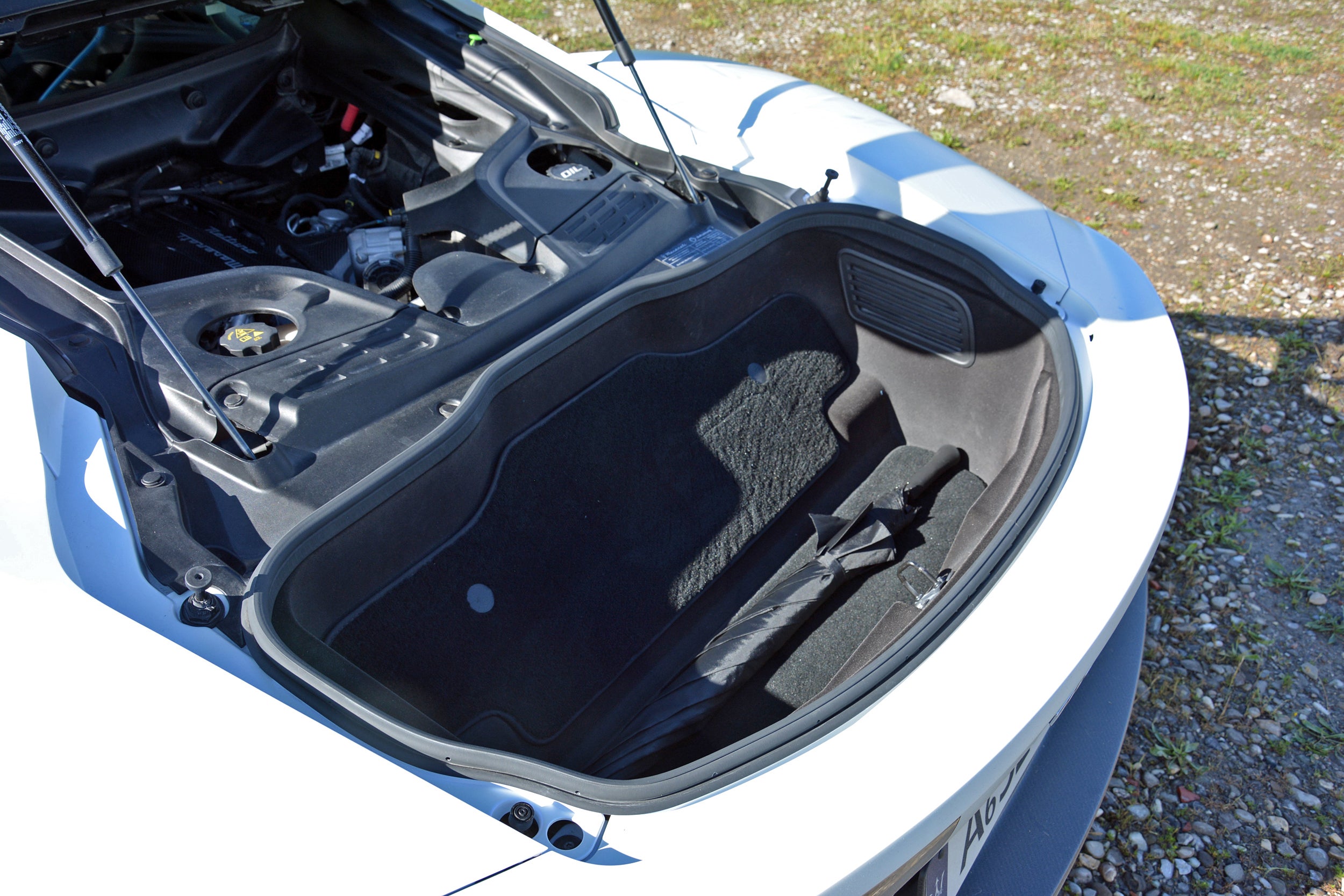 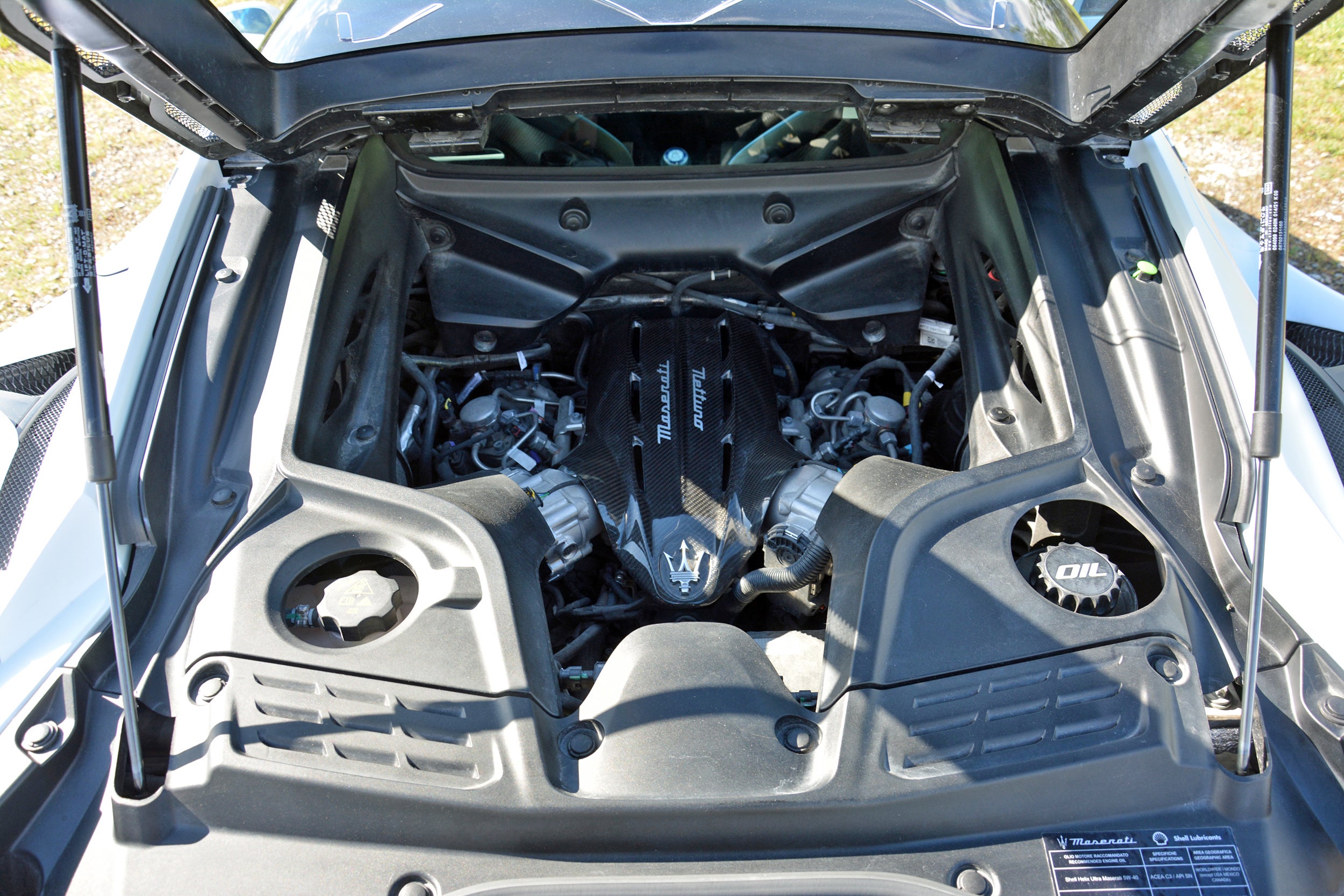 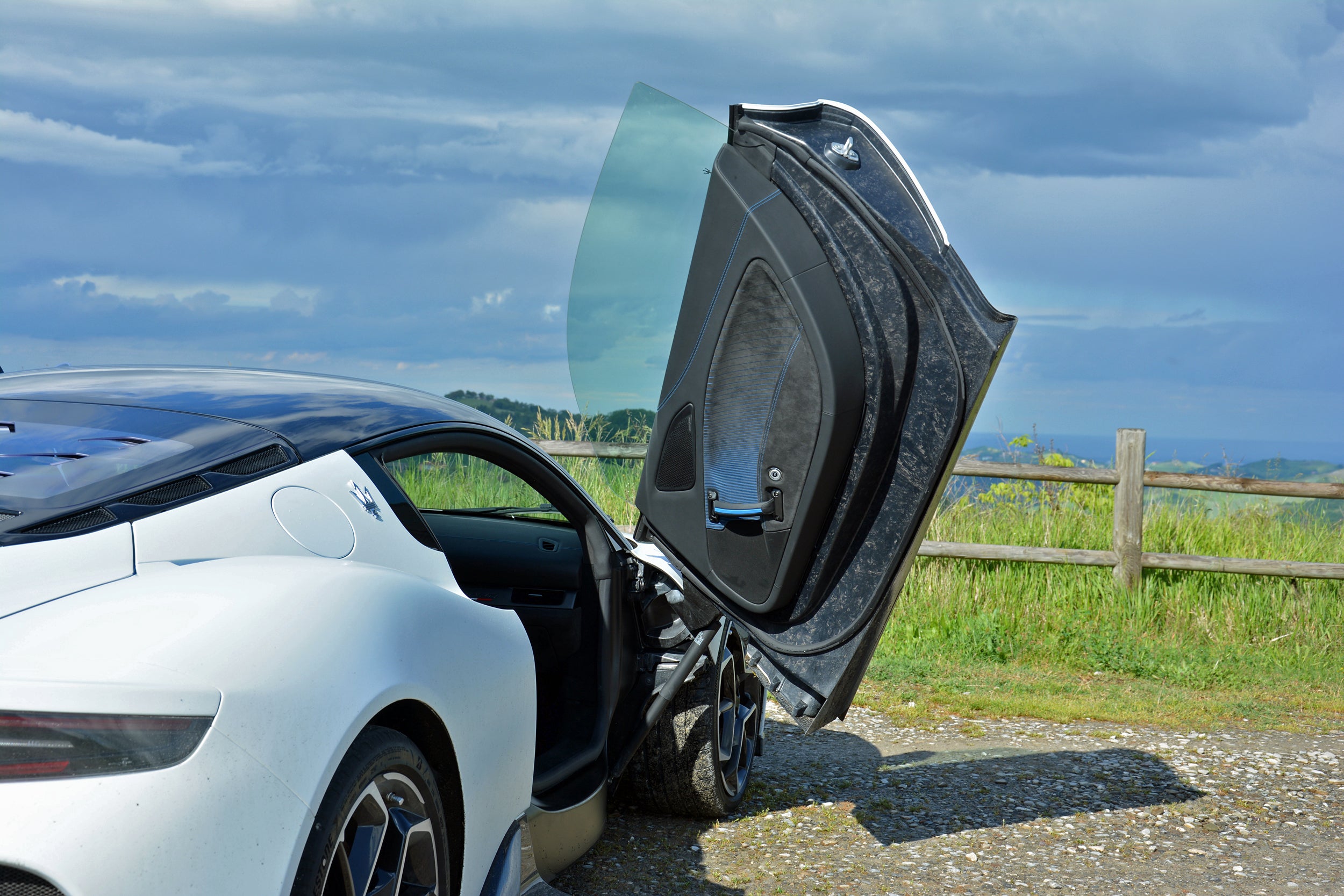 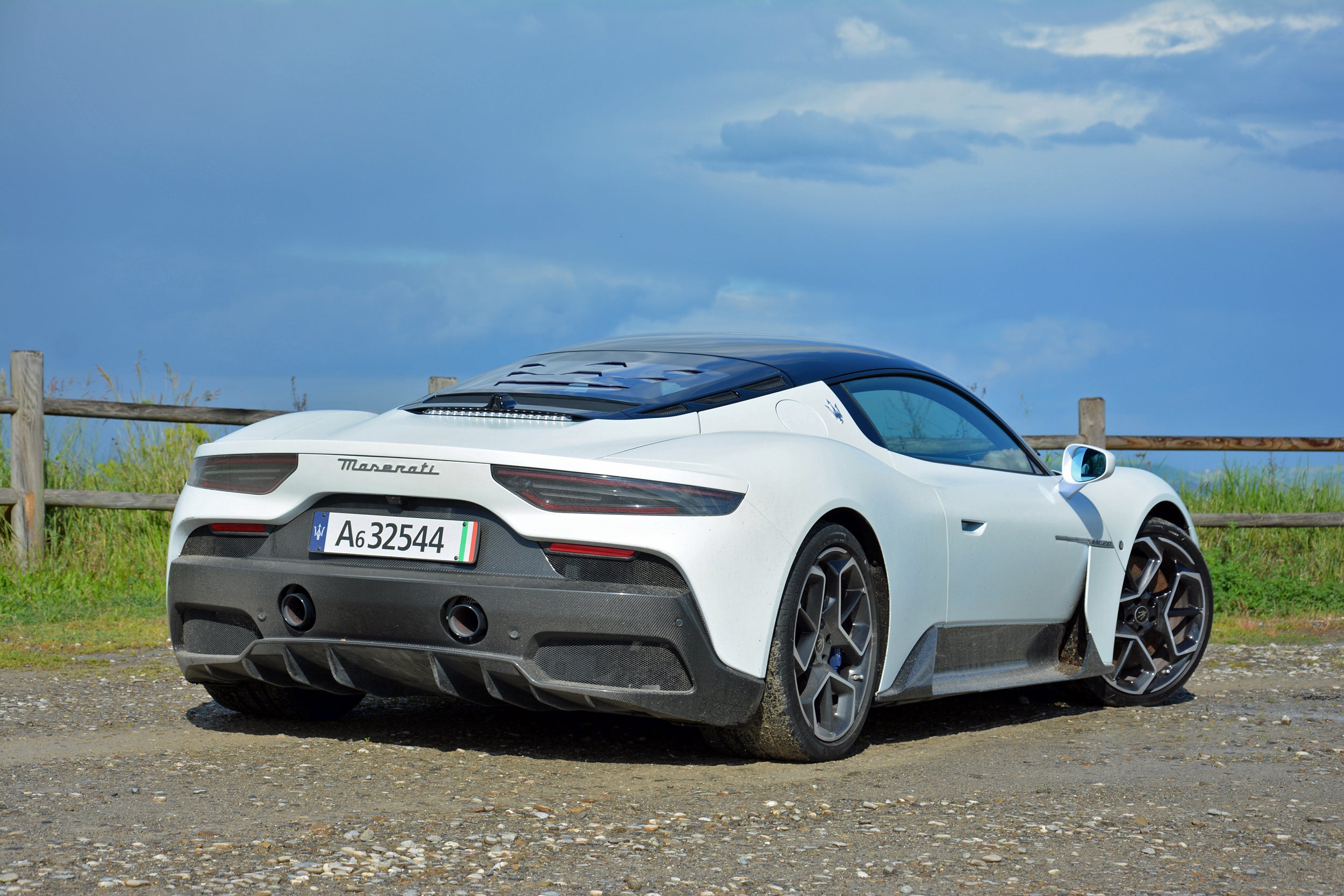 With the MC20 sitting as the crown jewel atop the upcoming Maserati range, the future looks bright.