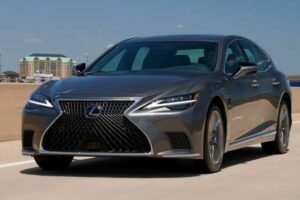 Tesla was first into the breach in the U.S. with a driver assist system capable of SAE Level 2 autonomy, which is the second-from-the-bottom tier of self-driving capability as defined by the Society of Automotive Engineers. (Full or close to full self-driving gets Level 4 and 5 designations.) Autopilot handles acceleration, braking, steering, and even lane changes on its own, but only on contained roads such as freeways, and the driver must monitor things. That Tesla allowed its Autopilot-equipped vehicles even that much autonomous leeway with the meager sensor package onboard raised eyebrows—all the more so when you consider what Lexus is bringing to the table with its SAE Level 2 setup dubbed Teammate.

Is Lexus late? Sure. Mercedes has offered similar capability to Autopilot for a few years now, including automated lane changes. But like Mercedes (which also trailed Autopilot), Lexus is coming in much better prepared.

Consider what Tesla works with: Its Autopilot-equipped vehicles (at least, before its recent abandonment of a forward radar sensor in the Model 3 and Model Y) include front, rear, and side-facing cameras, plus 12 near-range ultrasonic sensors (i.e., parking sensors). The larger Model S sedan and Model X SUV still include a forward-facing radar sensor, but Tesla has been pretty clear about the fact its onboard computers favor inputs from the cameras when scanning the road ahead.

Now consider what Lexus’ first go with Teammate brings to the table: Front-facing Lidar, front-facing long-range radar, short-range radar facing the front and blind-spot areas (three directions in total), 360-degree parking cameras and ultrasonic sensors, a forward camera, and a front-facing telescope. Both Teammate and Tesla’s Autopilot deliver a 360-degree view of the vehicle’s surroundings, but one is like having Terminator vision, and the other is the relative equivalent of waving a stick around yourself while blindfolded.

Although Tesla claims its cameras can deliver “powerful visual processing at up to 250 meters of range,” that performance is limited to certain conditions. Camera performance deteriorates in bad weather, whereas radar—so long as the sensor isn’t physically blocked by, say, ice or packed snow—can detect fast-moving objects in rain or sleet. Every sensor has its limits, of course, but there’s something reassuring about the multiple redundancies built into Lexus’ setup, wherein overlap exists in the viewpoints of the Lidar, radar sensors, and cameras.

Like Tesla, Lexus relies on sensors in the steering wheel that detect the driver’s grasp; with Teammate, you can go extended periods hands-free, but as soon as the system deems the driver is needed again, those hands better get to the wheel, quick, or else the car will begin to slow down and pull over.

Tesla, on the other hand, only recently began actually using the included in-car camera to track the driver’s involvement in the Model 3 and Y; the Model S and X hadn’t even included the cameras until their recent refresh. This lack of monitoring has made possible those moronic YouTube videos you may have seen showing Tesla drivers able to climb into the back seat, or even go to sleep, with Autopilot active, and with disastrous results.

So, How Does Lexus Teammate Work?

The short answer? It works well. The longer answer is, it feels like a future-looking driver assist designed by Toyota. In other words, the system truly acts as a driver’s partner and less like a carefree system a driver activates and simply tunes out from for a while. There is an abundance of communication from the car about where on the spectrum of involvement the driver is or needs to be in a given situation, too.

On a brief drive in Dallas near Toyota’s Plano, Texas, headquarters, we experienced Teammate’s two primary operating modes: Advanced Drive navigated, and not navigated. One can plug a destination into the nav screen, and, should the route take you onto an eligible freeway, you’ll be given a heads-up that Advanced Drive will soon be available as you approach an on-ramp. A distance countdown in the head-up display shows you exactly how far remains until hands-free driving is possible. Once on the freeway, a message flashes in the gauge cluster alerting you the system is initializing.

After a few seconds, if everything’s gravy, a graphic in the gauge cluster turns blue and an audible alert invites you to activate Teammate’s Advanced Drive function. Simply press the corresponding button on the steering wheel, and the system leaps into action, taking control of steering, braking, and acceleration at the speed you were traveling when you pressed the button. Drivers can use the cruise-control adjustment to increase or decrease their set speed.

Again, with a navigation destination set, the system alerts the driver when their exit is approaching; it determines and displays decisions 6 miles ahead of time, with exit urgency growing within 2 miles of an off-ramp. It prompts you to monitor lane changes toward that exit (if the car isn’t already in the right lane). Intriguingly, the car won’t simply accept a lane-change instruction (you can tap the signal stalk in the direction you’d like to go) or change lanes without you: Either way, it beckons you to check the mirrors and “blind spot.” Fail to get this head-turning choreography right (remember, the in-car camera is watching!), and Teammate won’t follow through. It’s not that Teammate can’t handle lane changes on its own: With rear-facing radar on each side, it can make sure a car isn’t fast approaching in your blind spot and size up gaps in traffic. That’s something Autopilot relies on parking sensors and a camera for. But Teammate will only do its robot thing with your participation.

Approaching exit ramps or forks in the freeway, Teammate will slow the vehicle and steer into the appropriate lane. The same distance countdown that shows your proximity to Advanced Drive-eligible freeways counts down the distance in feet remaining before the driver must take control. Teammate will guide the car fully down an off-ramp until this handoff. Fail to take the wheel, and the car cinches the seatbelt a few times to get your attention and sounds audible warnings before slowing rapidly. Tap the gas or brake (or press the Advanced Drive button on the wheel), and it hands you control. Using Teammate without navigation is much the same, minus the steering toward exits or through forks and without countdowns into and out of system eligibility.

As with Tesla’s Autopilot, Lexus Teammate uses the digital gauge cluster display to depict the Lexus positioned within lane markers (those are the lines that turn blue when the system is active), as well as animations of surrounding vehicles and objects. The similarities end there. In Teslas, the animated onscreen version of events surrounding the car are jerky, and nearby vehicles fade in and out of the Tesla’s field of vision. In the Lexus LS500h with Teammate we drove, objects nearby were rendered smoothly and accurately on screen, inspiring more confidence that Teammate knew what was going on.

The system’s driving smoothness, too, inspired even more confidence. Our Lexus remained precisely in the center of its lane unless—and this was impressive—a vehicle next to it got too close or wandered over the lane marker, spurring a gentle readjustment to maintain distance. At one point while Teammating in the right-hand lane, a Ford Explorer barreled down an on-ramp and looked like it was about to cross into our lane early, before the solid painted line separating the lanes gave way to a dotted one. As the Explorer was more or less even with the Lexus, we figured the car would crank the brakes and let the SUV cut in (likely taking the car following us by surprise) or, maybe, not see the situation developing and we’d be sideswiped. Instead, the LS500h deftly faded to the left and accelerated (we were traveling at less than our set speed at the time) past the wayward Explorer. It’s what a smart human would have done had one been driving.

Interestingly, Advanced Drive will beckon you to participate now and again, mostly when it isn’t entirely sure of its surroundings. It won’t necessarily ask you to retake full control, however. There exists an in-between state where the car will continue steering, braking, and accelerating, but it asks for your hands on the wheel. (The animated lane markers in the gauge cluster turn gray in these instances.) Should stuff really hit the fan—or you reach the end of an exit ramp after leaving the highway—a series of visual and audio warnings urge you to retake full control. In all, the setup’s feedback loop bolstered its apparent capability, leaving us far more comfortable than in other similar combinations of adaptive cruise control and lane-keep assist.

Lexus Teammate and Advanced Drive makes its debut on the 2022 LS500h hybrid sedan this fall. It also includes an Advanced Park function that fully handles parking, including steering, throttle, and braking (we didn’t have the chance to try it). We suppose, over time, the feature will spread beyond the LS flagship sedan to other Lexus models, but Lexus has not yet specified its next steps. Curious how you’ll spot a Teammate-equipped Lexus? Look for the little radar sensor units on each front fender (they look like vents but face rearward). Oh, and the driver may not be holding the wheel.