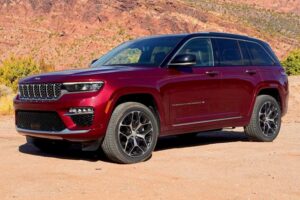 It’s safe to say the 2022 Jeep Grand Cherokee is a big deal. For one, it’s among the company’s best and most consistent sellers. During 28 model years in production, sales of the Grand Cherokee have only dipped below 100,000 units per year in the U.S. three times—during the economic downturn from 2008 to 2010—and below 200,000 units per year only eight times. Plus, as the only vehicle in its class with real off-road capability, it has an extra development threshold to meet, even if most buyers never venture off-pavement.

Although sales have remained strong, the defining two-row unibody SUV hadn’t gotten a major upgrade since 2011. Staying competitive means threading a needle through value, luxury, and capability, and every new generation presents an opportunity to get that all-important mix right and win, or get it wrong and lose ground. Spoiler alert: Jeep got it right again. 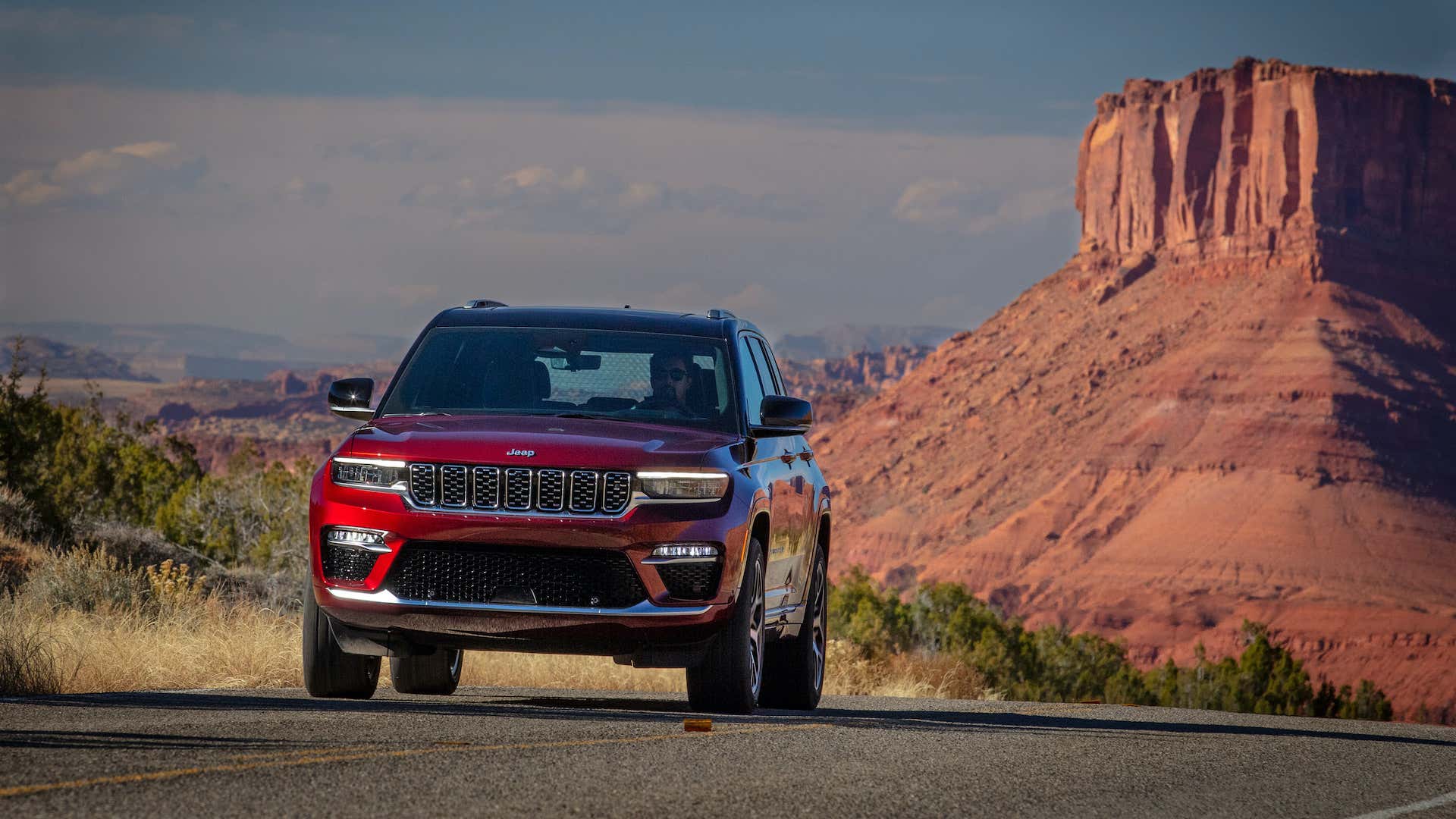 2022 Jeep Grand Cherokee: By the Numbers

One day earlier, however, safely outside the attention envelope of POTUS’s gastrointestinal display, Bob Lutz, then-head of product development at the Chrysler Corporation, drove a Jeep Grand Cherokee through a plate glass window.

With a throng of journos gathered for the Detroit auto show press days, and a camera crew following closely, Lutz wheeled the Grand Cherokee from the Jefferson North assembly plant where it was built, down Jefferson Avenue, up the steps of the Cobo Center, and into the convention hall, crashing through a specially installed glass pane. By the end of that day, January 7, 1992, more than 40 million TV viewers, most of whom were 35- to 54-year-olds—prime Grand Cherokee buyers—had caught the vehicle’s debut.

Those were simpler times: when mass media could deliver a truly massive audience to a publicity stunt on a mercifully slow news day. In fact, this was Jeep’s most important product launch since WW2. With an aim to knock the dominant Ford Explorer off its perch, Lutz would likely have done anything to get eyeballs on his new contender—even if he had to, one would imagine, commit Busshu-suru on a major political figure himself.

There were no stunts and no TV cameras on hand for the debut of the Grand Cherokee’s fifth-generation recently, but don’t think the 2022 model-year GC is any less critical to Jeep now than the first generation was three decades ago.

Jeep’s 2022 Grand Cherokee gets a load of improvements for its fifth generation: A new platform architecture with some important suspension tweaks, a fresh infotech package, and a complete rethink of the GC’s interior that yields more space for both people and things. It shares those improvements with the new, three-row Jeep Cherokee L, which we drove earlier this year.

Looks-wise, the fifth-gen Grand Cherokee is an evolution of the fourth gen’s minimalist design with a few exterior refinements to give it a more tailored, upscale bearing. The hood extends further over the unmistakable seven-slot grille, which is wider and larger than previously, pushing the front fascia angle forward instead of it leaning back like on the previous model. In the rear, slimmer, less-obtrusive taillights wrap deeper into the D-pillar, while a slimmer C-pillar provides better side visibility. Buyers of the Overland trim level can order a gloss black roof, which comes standard on Trailhawk, Summit, and Summit Reserve. 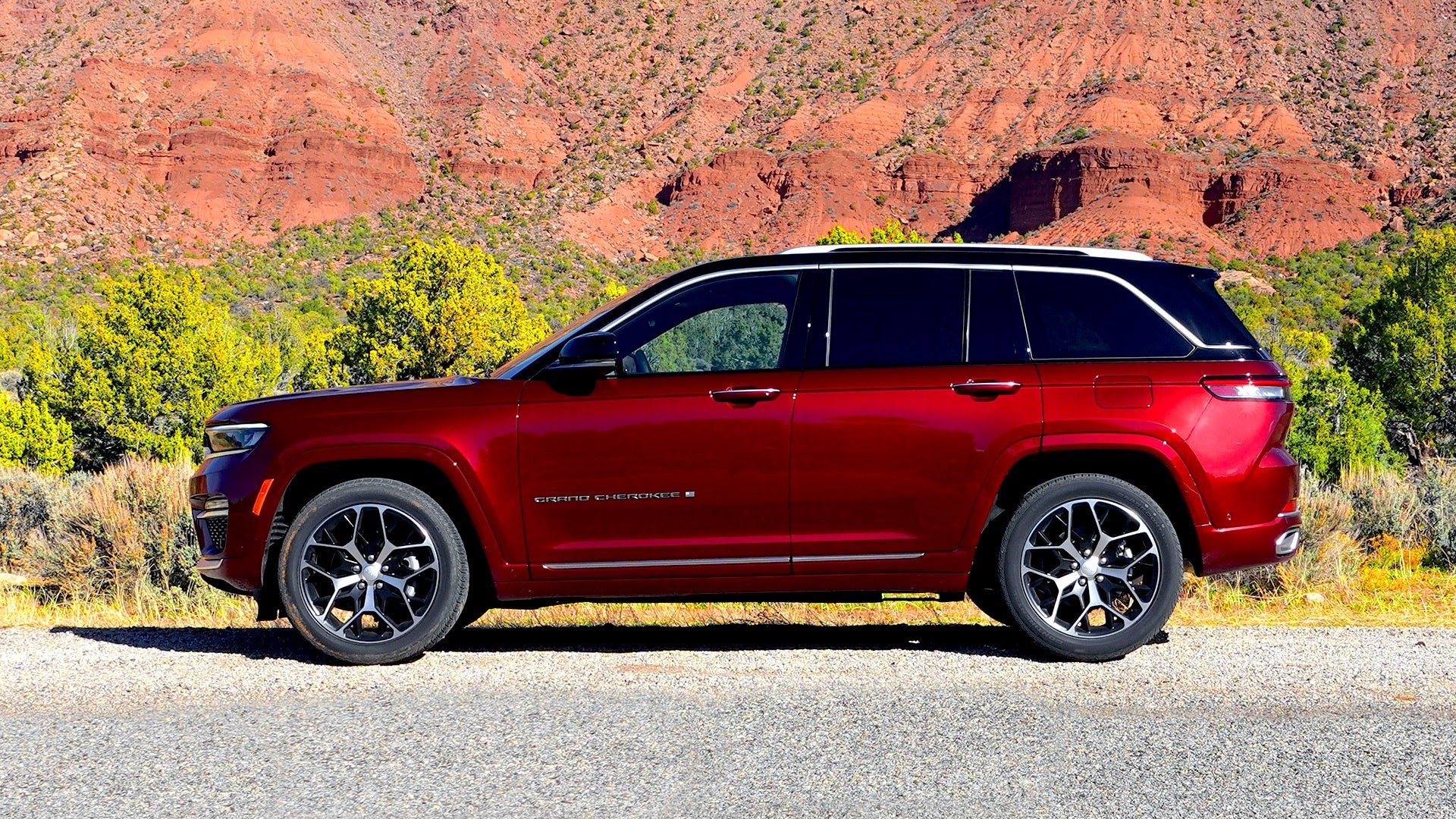 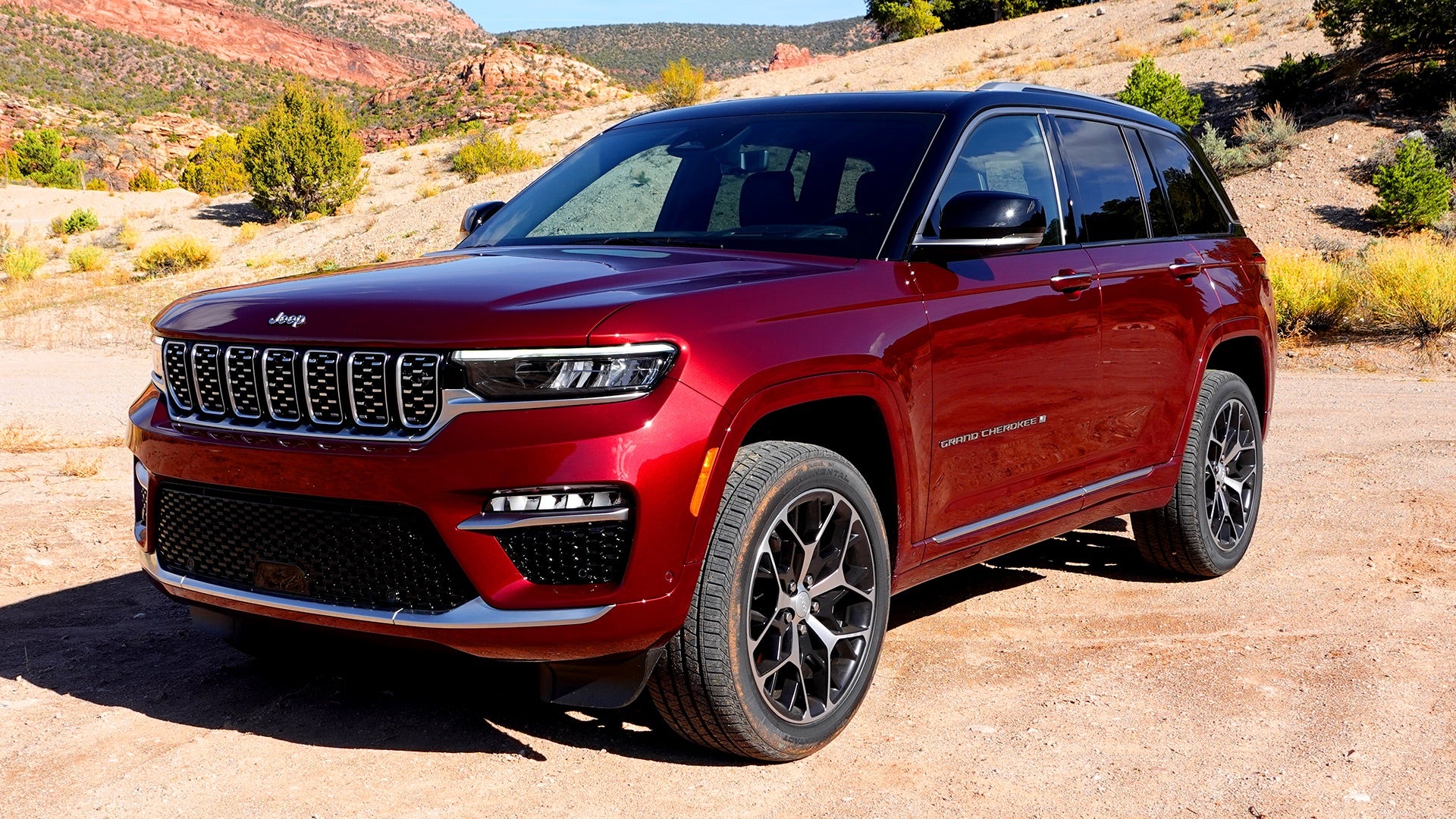 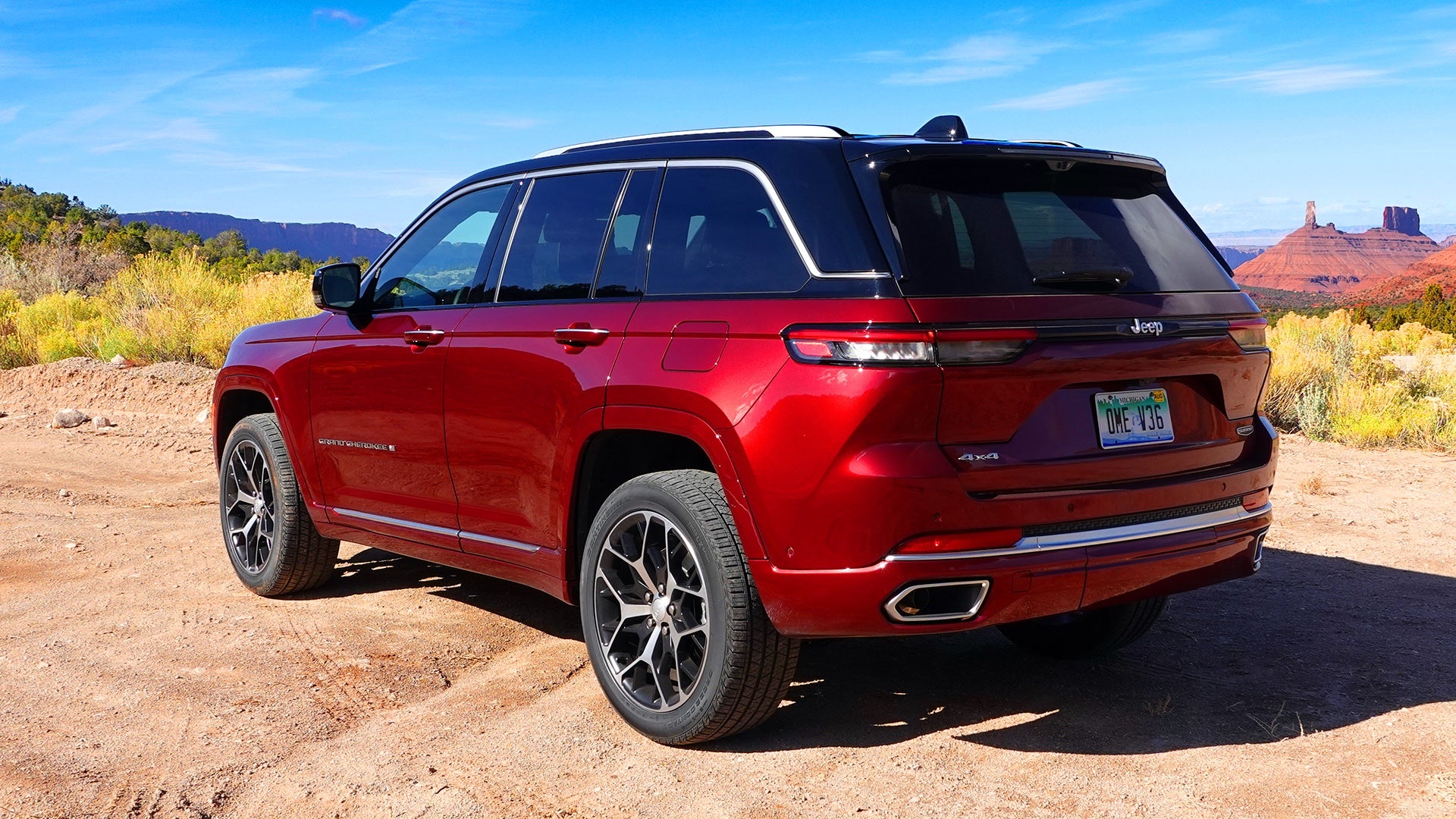 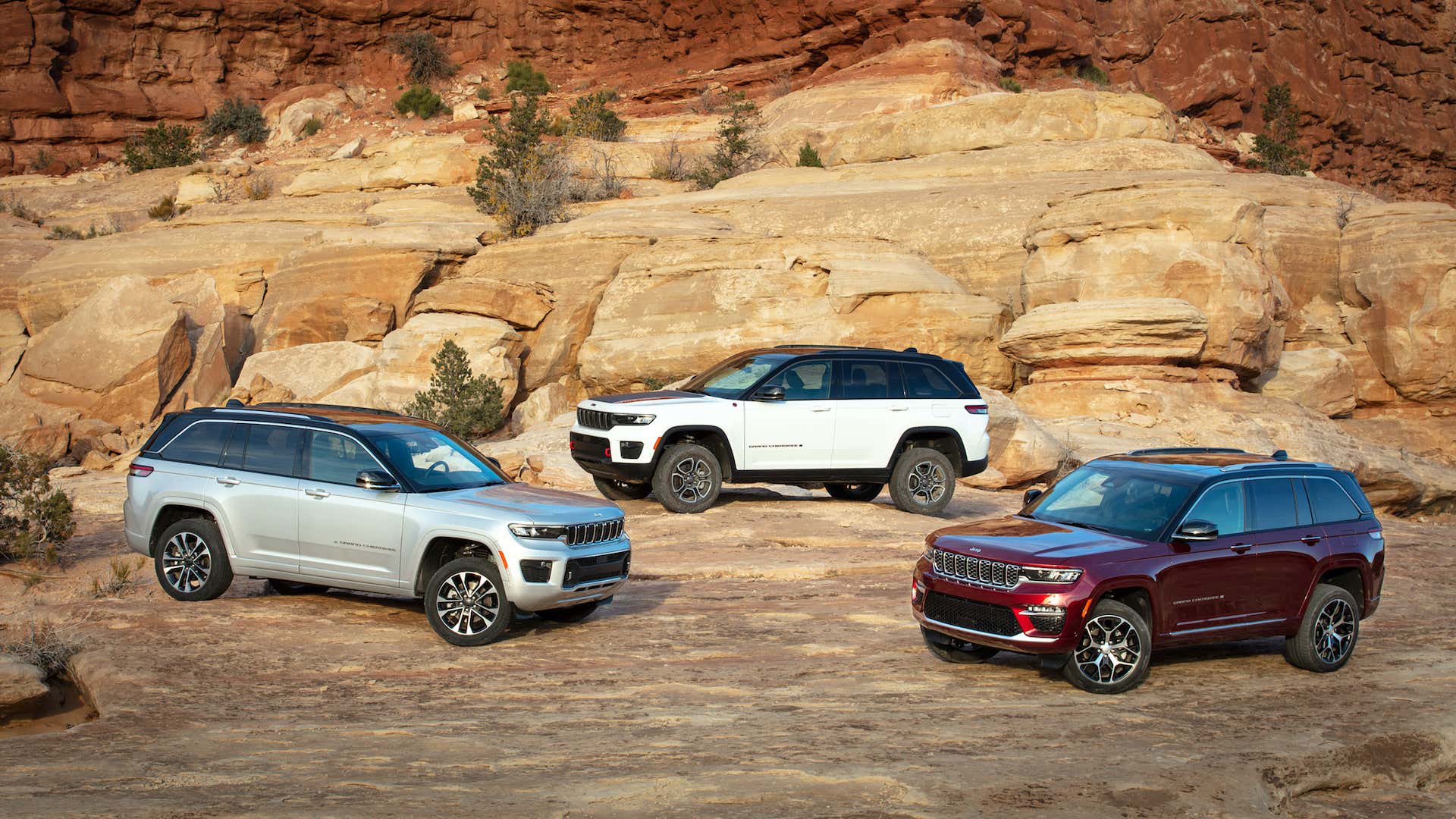 With seven trim levels, it’s easy to match a range of budgets and needs. The standard engine on all trim levels—Laredo, Altitude, Limited, Overland, Trailhawk, Summit, and Summit Reserve—is the 3.6-liter Pentastar V6, with 293 horsepower and 260 pound-feet of torque. It’s a workhorse that relies on the kindness of the eight-speed ZF automatic transmission to keep it in its optimum rev range. The 5.7-liter V8, producing 357 hp and 390 lb-ft of torque can be ordered on the Overland, Trailhawk, Summit, and Summit Reserve, like the one Jeep put me in for a test in Moab, Utah. It’s a dutiful if not spine-kicking power source, which boosts towing capacity from 6,200 pounds for the V6 to 7,200 pounds.

The new interior layout is a substantial level up from that of the previous model; from the driver’s seat, it feels more expansive and roomier than before. The term “master of all you survey” comes to mind. On the Summit Reserve I drove, the Palermo leather with attractive accent stitching has been upscaled from the crinkle-prone hides of the previous generation Summit, and the open-pore wood grain wouldn’t look out of place in a boutique fly-fishing hotel, if such a thing exists.

I got a taste of the GC’s improvements in ride quality and handling on a drive route that wound along the Colorado River and up into the Manti-La Sal National Forest. Slightly longer and with a wider track than the last-gen model, the new Grand Cherokee retains its truck-like road presence, while a more responsive air suspension system delivers a more car-like ride. Jeep’s Quadra-Lift air suspension, which provides 11.3 inches of ground clearance in its highest position, can also enable 24 inches of water fording, more than enough for weekenders looking to push the envelope. 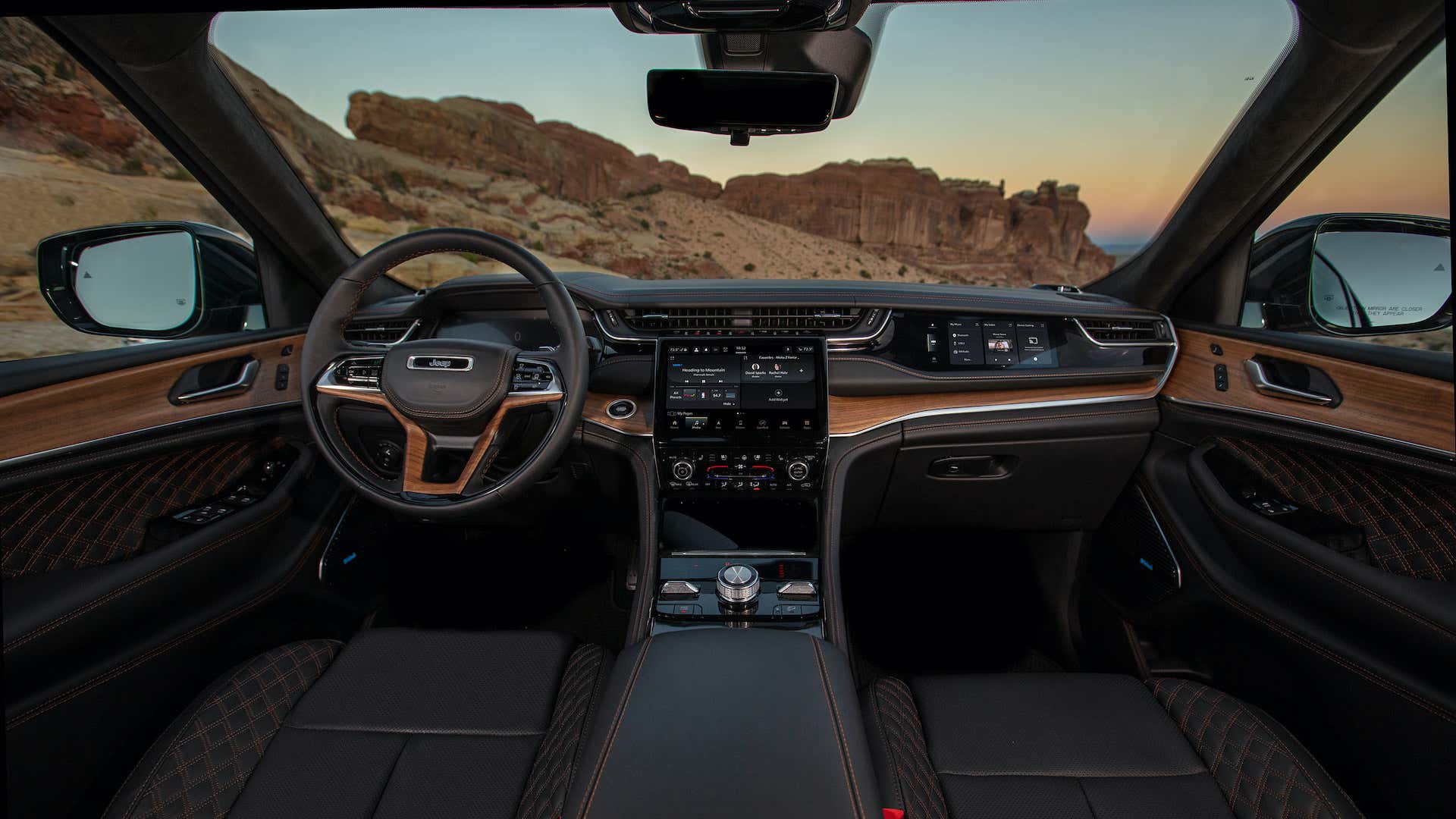 For those just looking for a satisfying street drive, the system is adept at smoothing out small imperfections and downscaling the impact of larger ones, like cattle grids, giving the GC a more premium feel than it had previously. In sport mode, the air springs hunker down and the semi-active dampers tighten up, improving handling precision. In fact, aside from the new interior, improvements in overall ride quality might be the biggest surprise for current Grand Cherokee owners, even if hampered somewhat by the new Summit’s larger, 21-inch wheels.

The V8 hides its muscularity under a bushel, however. A set of hard-working active engine mounts damp out any sense of horses kicking in their stalls. There’s little V8 drama, too; from the cockpit, the telltale roar sounds like it’s coming from two towns over. But tuning out such feedback is how Jeep’s doing premium, not leaning into the sound and fury like, say, Range Rover might. If you were hoping for a more demonstrative, higher-performance street version like the ex-SRT model to pick up the slack, I wouldn’t hold my breath. Still, there’s something to be said for only needing 89 octane. The same, crisp-shifting ZF eight-speed automatic transmission that dealt gears in the previous model is back for a well-deserved encore.

In the Summit Reserve’s driver’s seat, the luxury hits kept coming, with 16-way adjustable front seats, which, although I neglected to try out the massage function, were nonetheless comfortable. It’s a nice easy-chair in which to enjoy the optional 19-speaker McIntosh audio system—not only one of the nicest-sounding premium systems available but also includes an app that puts a digital version of McIntosh’s telltale blue VU meters on the 10.1-inch center screen. 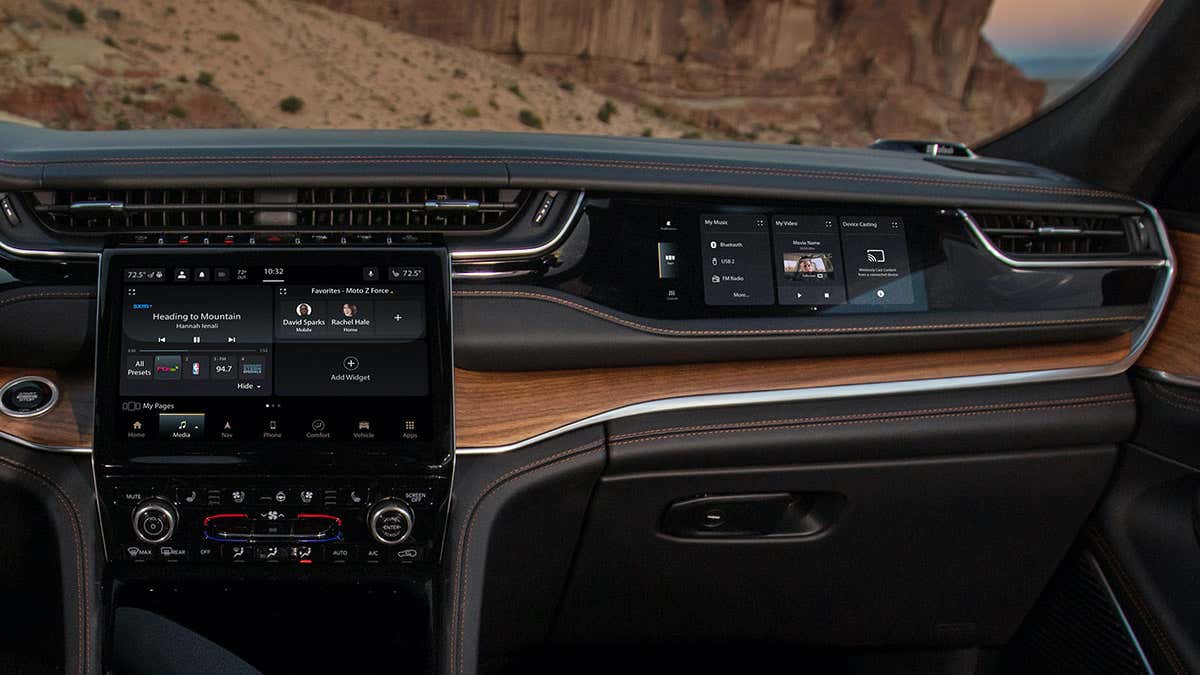 The new UConnect 5 infotainment suite is among the best.

Not to mention, the latest UConnect 5 infotainment suite provides another area in which the Grand Cherokee excels. With new hardware enabling a five-times faster operating speed and a customizable user interface built on Android Automotive, the system—which has been among the best since it was released—is even better and more intuitive to use and personalize than before. Integration with Amazon Fire TV and the ability for the front passenger to manage from their 10.25-inch master display, who’s watching CoComelon on one rear screen and who’s watching The Owl House on the other is a harried parent’s dream come true.

Off-road capability is still a vital selling proposition for Jeep, and the Grand Cherokee is second only to the Wrangler/Gladiator among the seven-slot gang in that department. Across the board, four-wheel-drive adds $2,000 to each GC trim level. Jeep’s three available 4WD setups include the single-speed Quadra-Trac I, two-speed Quadra-Trac II, and Quadra-Drive II, which includes low range and an electronically controlled, clutch pack limited-slip rear diff.

Our Summit Reserve test car had the top-spec system but I didn’t do any off-roading in it. Instead, Jeep provided a V6-powered Trailhawk and guides from Jeep Jamboree USA who took us up a private trail to demo the best off-roader of the bunch. Using the center-console selector dial, I switched the Selec-Terrain traction management system into “Rock” mode (there’s also Sand/Mud and Snow) and engaged four-wheel-low. The system combines and calibrates all available drive functions, including 4×4 torque split, throttle control, transmission, traction control, stability control, and anti-lock braking. 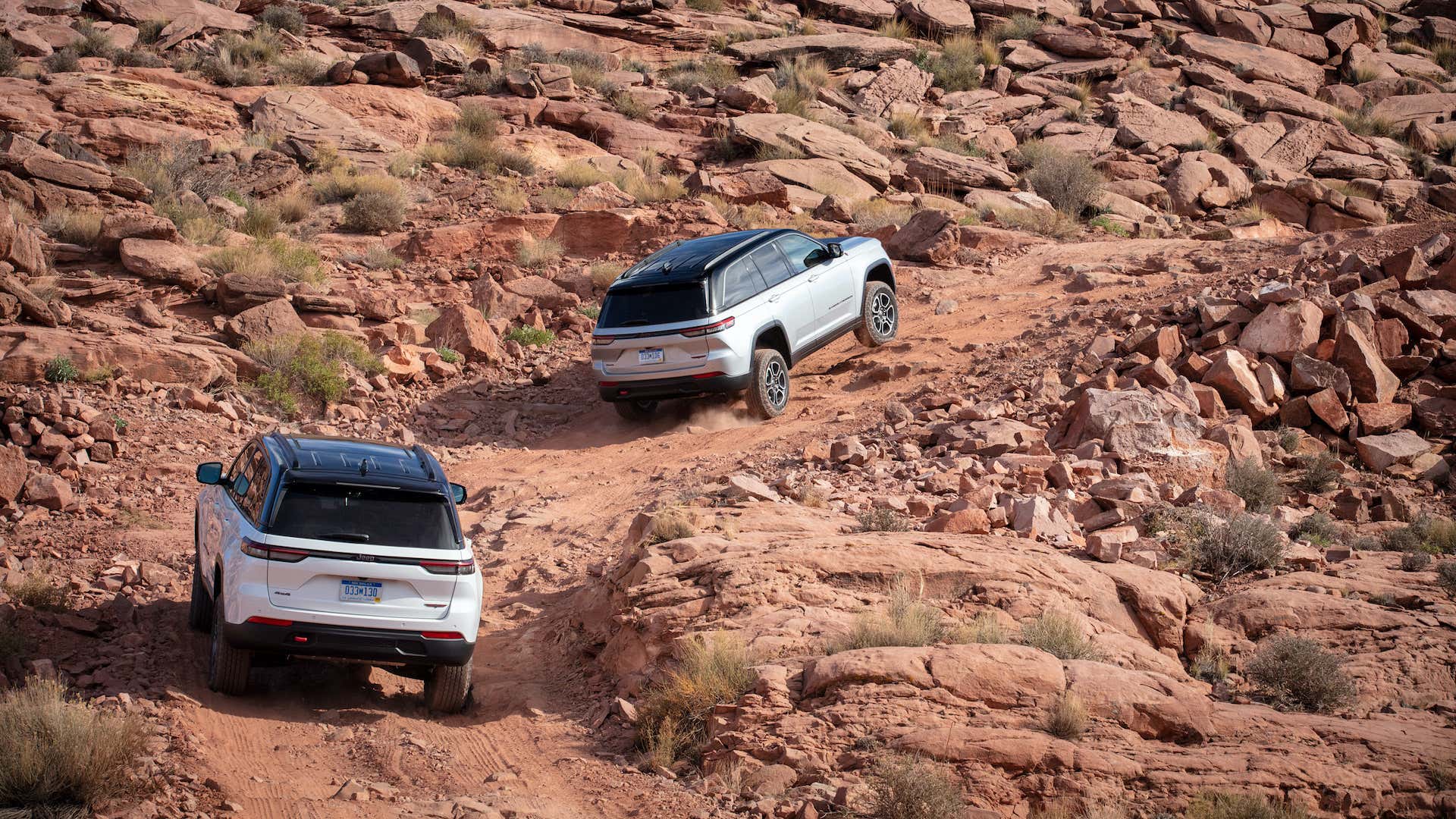 Trailhawking up a 4-5 rated trail that included a 21-percent grade.

According to one guide, the trail, which maxed out at a 21 percent grade, would be rated somewhere between a four and a five out of 10, meaning it was fairly steep with some gnarly cutbacks—like a well-traveled mountain pass—but lacked the boulders, mudholes, and other obstacles you might see on Jeep’s benchmark Rubicon Trail, which would have demanded a bit more skill on my part. With its new, disconnecting front sway bar for greater articulation, along with off-road tires and skid plates, the Trailhawk was able to claw its way up the trail, made easier with the front-facing camera, with an “is that all you got?” grunt at the top. On the way down, the Selec-Speed function, a sort of cruise control for off-roading, made the return trip additionally well-controlled and idiot-proofed, even when pulled downward by gravity.

Among the Grand Cherokee’s most important product attributes is its adaptability to budget and use case. With seven trim levels, a buyer can spec up a GC from the base Laredo, starting at $37,390 (2WD, +$1,795 destination) to the top-of-the-range Summit Reserve, which starts at $63,365 (4WD +$1,795 destination). The most capable off-roader in the lineup, the Trailhawk, starts at $51,275 (+$1,795 destination) and will be available in hybrid form as the Trailhawk 4xe, set to launch in early 2022. As Jeep reps pointed out, a 4xe recently made it across the brand-defining Rubicon Trail under all-electric power, a feat we’re sure to see in ads any day now.

But even at an as-tested price of $73,085, the new Summit Reserve could challenge higher-end luxury SUVs for value. For example, it’s roomier and more rugged than the Mercedes-Benz GLE 450 4MATIC, while not giving up ground on interior materials and design, while Range Rover Sport buyers might find most of what they need at the Jeep dealer for tens of thousands less. Point is, with its recent moves in the space, there’s no doubt Jeep’s serious about defining and staking out its own territory among upscale SUVs. 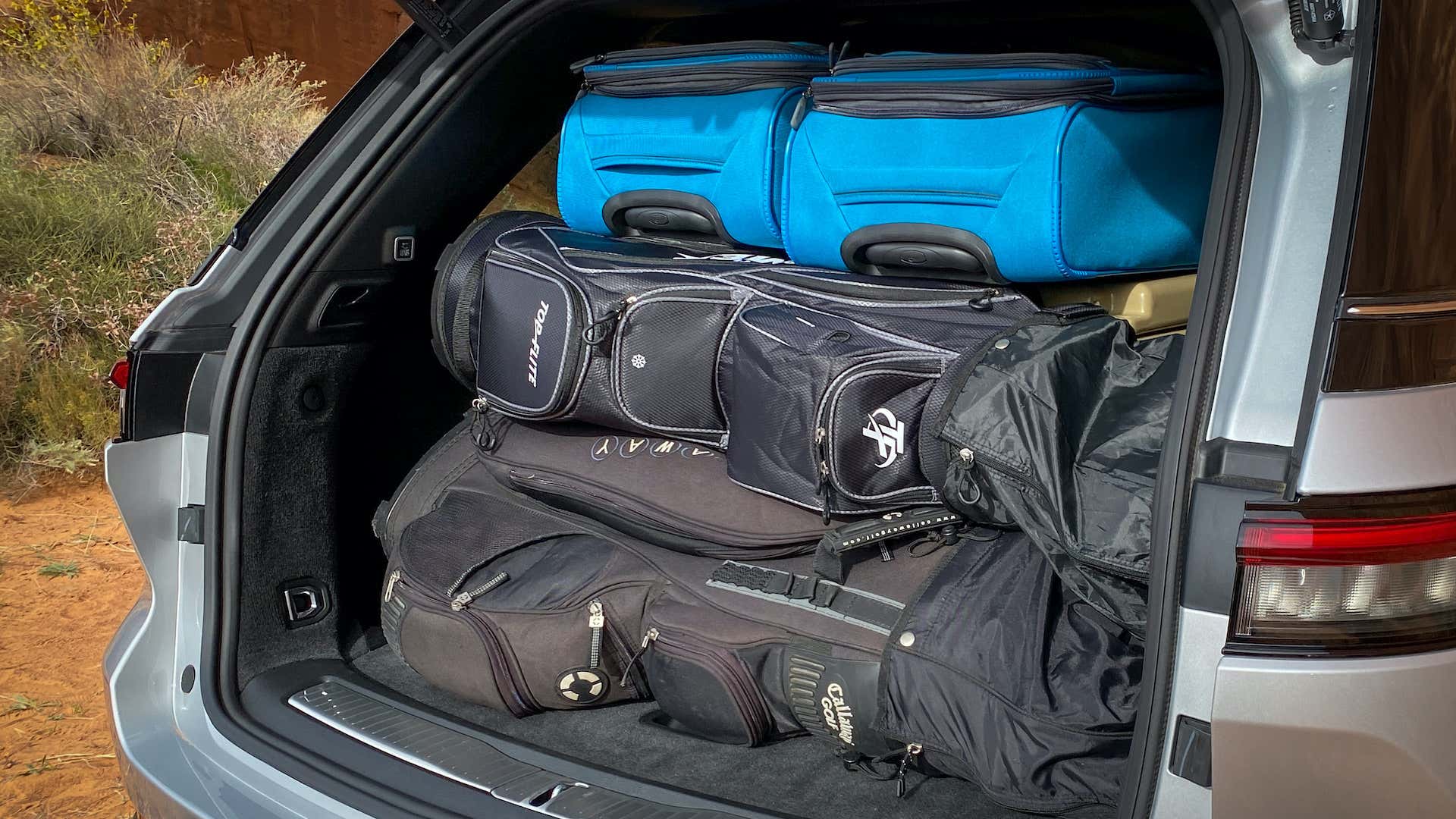 Unlike the previous generation, the fifth-gen Grand Cherokee can carry golf bags transversely.

From both the spec sheet and in the flesh, the new Grand Cherokee is indeed a level up in a number of areas. It’s longer and wider, has more cargo room (unlike the previous model, it can store golf bags transversely), and gets a significant upgrade in infotainment tech. An airy and spacious new driver compartment and a class-leading interior trim at the top level give the new GC some major muscle against competitors in the two-row space. That the overall effect of these upgrades on the user experience feels more incremental than radical is a testament to both how well-considered the previous Grand Cherokee was and how the vehicle’s continued sales success allows for some well-earned evolutionary, rather than revolutionary, thinking.

Considering how low-key better this model is, and how the Grand Cherokee has won its hard-earned place over the past 28 years, it probably won’t have to shatter another window to get your attention this time.