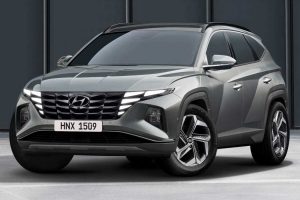 Labeling a new-car debut story as a “First Look,” as we do here at MotorTrend, can prove slightly limiting on occasion. What if a new vehicle, say, the 2022 Hyundai Tucson, invites second, third, or even seventh looks? If you have only one look to give, however, we say make it last as long as possible with Hyundai’s all-new compact crossover.

The current Tucson has been on sale since 2015, having been last fully redesigned for the 2016 model year. It’s a competent if unassuming entry in the competitive compact crossover segment. (It places midpack in our rankings of the class.) The 2022 Hyundai Tucson, on the other hand, is almost entirely new, with fresh styling, new hybrid powertrain options, and a massively overhauled interior.

Hyundai will build two versions of the Tucson, one with a short wheelbase and one with a longer one—only the latter will be sold in the U.S. (This strategy is similar to the current VW Tiguan, which is sold in America in the longer of its two global forms to offer more interior room.) As before, front- and all-wheel drive will be available.

You are not looking at a concept car, or a design apparition—this is the 2022 Hyundai Tucson you’ll be able to buy next year. Wild, isn’t it? Compressed within the fairly conventional tall-hatchback shape of a modern compact crossover SUV is a lot of styling. Typically that spells trouble, as piling design on design can often be too much. On the Tucson, though, the riot of creases, chamfers, and chunky surfacing kind of works. We wouldn’t call the result beautiful, and some of the flourishes or perhaps too florid on their own, but the Tucson is eye-catching without being ugly.

Hyundai is working with a new styling language here, one we haven’t seen on any other production model save the limited-production, high-tech Nexo fuel-cell electric vehicle. The SUV’s face is striking and dominated by a spread-wings grille-and-headlight combination. Deep cheekbone vents with fog lights nestled into them are likely nonfunctional but give the Tucson a more purposeful aesthetic than most small SUVs. Ditto the Hyundai’s athletic stance, where the wheels seem to sit wide of the body beneath bulging fenders and the tail seems kicked up in the air. Jaunty!

Most observers’ eyes will quickly flit to the taillights, however, which in shape and execution bring to mind the Ford Mustang’s vertical-bar arrangement. As we noted when preview images of the Tucson dropped ahead of the official debut, the lights are more original than they first seem, however. There are only two bars per side (the Mustang wears three), and they’re connected by a full-width reflective unibrow. Each taillight bar also is more triangular and three-dimensional in shape than the Ford pony car’s units. Other novel styling touches include the faux vents stamped into the trailing edge of each fender flare, the Hyundai badge hovering in the tailgate glass, and the silver trim (with its own simulated vent stamping at its trailing edge) running up and over the side glass all the way to the Tucson’s tail. Final dimensions have yet to be revealed, but it would appear as though the new Tucson is larger than the old one; this theory is backed up by the cargo volume figure Hyundai provided. At 38.7 cubic feet, the 2022 Tucson’s cargo area is notably larger than the 2021 model’s 31-cubic-foot hold; both figures are measured with the rear seats upright. With them folded, the new Tucson’s figure surely jumps beyond the current model’s 62-cubic-foot capacity.

Forget the current Tucson’s interior styling if you haven’t already. The new model’s cabin turns its sights upscale, with a handsome dual-cockpit setup split by a waterfall central stack and an elegant “floating” center console. A trim element lining the top of each front door flows into the dash, with well-integrated air vents embedded at each front corner; that trim line continues all the way in front of the driver and front-seat passenger and frames the central stack. A set of pushbutton transmission controls helps streamline the already sleek-looking center console by eradicating a traditional shift lever; just ahead of the console is a horizontally arranged set of physical buttons for the seat heaters and ventilation, steering wheel heater, and parking cameras and sensors. The control treatments scream “luxury car!” even though the Tucson is priced and sold as a mainstream compact SUV.

A new 8.0-inch touchscreen with Apple CarPlay and Android Auto phone integration is standard, but the optional setup wows: It’s a 10.3-inch touchscreen pictured that fits flush with the surrounding panel. Below it sits a strip of touch-sensitive, backlit controls for volume and tuning, as well as shortcuts to the navigation, radio, media, and setup menus. While logically arrayed, the controls raise two potential shortcomings: First, being touch-sensitive and shapeless, the buttons likely will require a glance to operate (you can’t easily “feel” for a flush-fit, touch-sensitive button as you can a physical button or a knob). Also, speaking of knobs, there aren’t any on the 10.3-inch screen—only tap inputs for volume and tuning, which could prove fiddly, as it does in certain products from other automakers.

At least with the optional 10.3-inch display, the Tucson also includes touch-sensitive climate controls below the main touchscreen. These flank a conventional digital display for the air temperature and fan speed. Again, the button layout appears intuitive, but these touch-sensitive controls carry the same potential drawbacks as those for the audio system. More information on the base setup, which we presume won’t be touch-sensitive, is expected later this year, when U.S.-specific 2022 Tucson information will be released.

Big changes are in store beneath the Tucson’s straked hood. Last year’s engine lineup—a 2.0-liter four-cylinder engine and a turbocharged 1.6-liter engine—is replaced by an all-new 2.5-liter four-cylinder and a pair of hybrid options based around a turbocharged 1.6-liter gas engine and an electric motor. The 2.5-liter four is standard, and puts down a class-competitive 190 horsepower and 182 lb-ft of torque (both figures are preliminary estimates). It comes paired with an eight-speed automatic that’s also new to the Tucson, and will also be offered with front- and all-wheel drive choices.

The two hybrids include a regular gas-electric setup and a plug-in hybrid with a large battery pack for extended electric-only driving capability, much like Ford’s Escape Hybrid and Escape Plug-In Hybrid models. Regardless of which hybrid you choose, it will have a turbocharged 1.6-liter four-cylinder engine (180 horsepower, 195 lb-ft of torque) assisted by an electric motor of unspecified output and using a six-speed automatic. Hyundai does quote a total output for the system, a substantial 230 horsepower and 258 lb-ft—on par with some turbocharged, nonhybrid competitors and reminiscent of Toyota’s strategy with its similarly sized RAV4 hybrid and plug-in hybrid, which are more powerful than their gas siblings and promise both better fuel economy and improved performance.

More zest may be on the horizon, too: Hyundai isn’t offering specifics yet, but it has announced a sporty N Line trim will be part of the 2022 Tucson’s lineup. The Elantra and Sonata N Line models provide a general blueprint, but beyond that, further details (including U.S.-specific information) surrounding the new Tucson and its N Line variant are due closer to the end of the year.