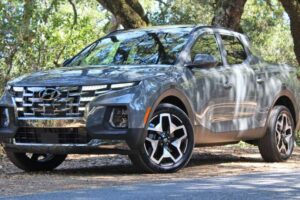 The 2022 Hyundai Santa Cruz is, and it’s important to get this out of the way first, a mid-size crossover with a pickup bed. I will continue to call it a pickup out of convenience, though I know it will prompt some to reflexively shout IT’S NOT A TRUCK every time. You remember the Subaru Baja—it’s like that, but bigger in every dimension; roughly the size of a Kia Telluride. It’s a pretty weird car, but not just for weird cars’ sake. It takes the crossover form, gives it a strange twist and turns it into something better.

From the first row, the Santa Cruz is like a normal, nice Hyundai. But by adding the bed, Hyundai created something that isn’t quite like any other pickup or small SUV. It’s not like a Honda Ridgeline, which tries very hard (and mostly succeeds) to be a truck, nor does it feel the same as the Hyundai Tucson it was carved from. People look at it a little funny. They’re not sure what to think when they see it. The Santa Cruz is a vehicle that’s finally different in a sea of other similarly sized and shaped machines. 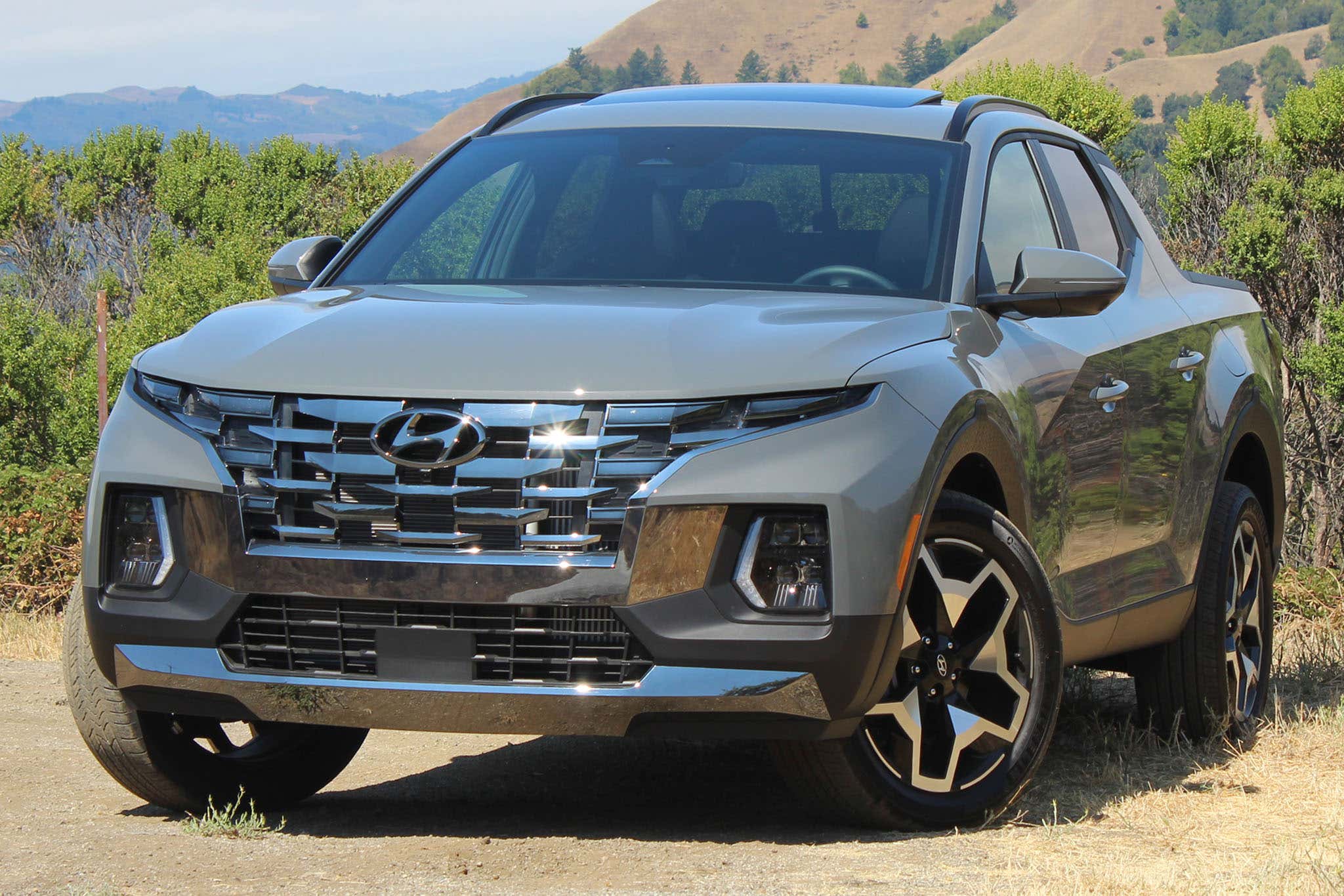 Yet, with the addition of a few other ingredients like plenty of available horsepower, all-wheel drive, and lots of optional equipment, the Santa Cruz is a quirky car that’s not too unorthodox to live with every day. It strikes a careful balance, and a good one at that.

2022 Hyundai Santa Cruz: By the Numbers

Don’t Hate on the Bed

The Santa Cruz is Hyundai’s first-ever pickup to be sold in the United States, and it uses the same basic platform as the similarly styled Tucson SUV. It comes with a choice of two drivetrains; a turbocharged 2.5-liter with an eight-speed DCT and a naturally aspirated version of the same engine with a regular eight-speed automatic. Both drivetrains are available with just the front wheels driven, or all of them driven for an extra $1,500. The cheapest and most basic version of the Santa Cruz has a regular automatic, is naturally aspirated, and front-wheel drive.

The bed is “just” 4.3 feet long. One may question the utility—as I initially did—of a 4.3-foot bed, but it’s not as simple as just looking at the total length in a vacuum. In fact, I’ll take it a step further and say comparing this thing to any other pickup is a bit fraught. This is because the bed was more like a utilitarian trunk. It had an integrated roll-out tonneau cover which locked, meaning I could use it just like a trunk. It also had under-bed storage big enough for a few backpacks, compact cubbies in the fenders for smaller objects, and adjustable tie-downs for larger gear. You can also, if you are so inclined, haul 4×8 sheets of plywood in the back, so long as you put down the tailgate and strap everything in place. An available 115-volt power outlet is a nice cherry on top, as well. 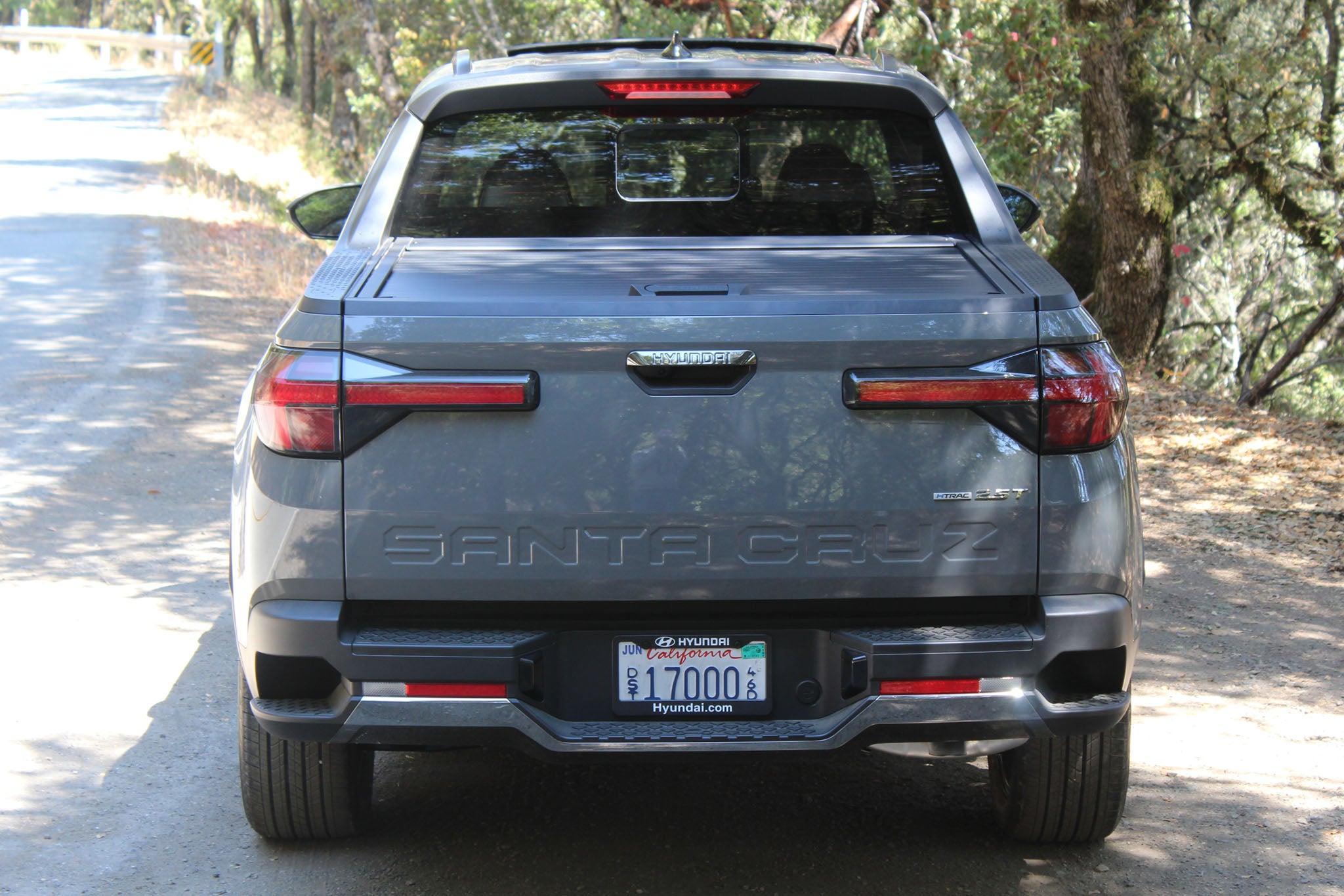 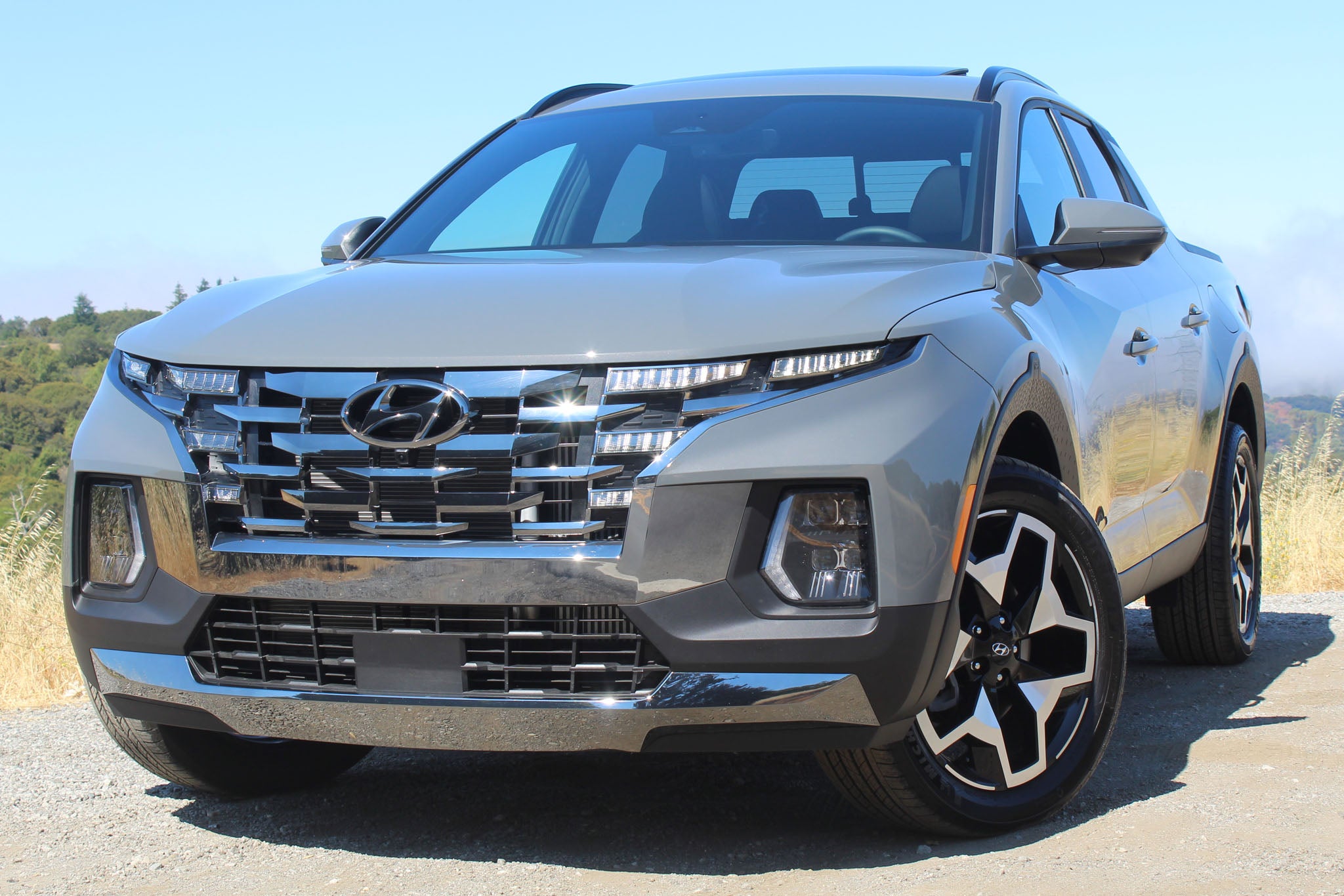 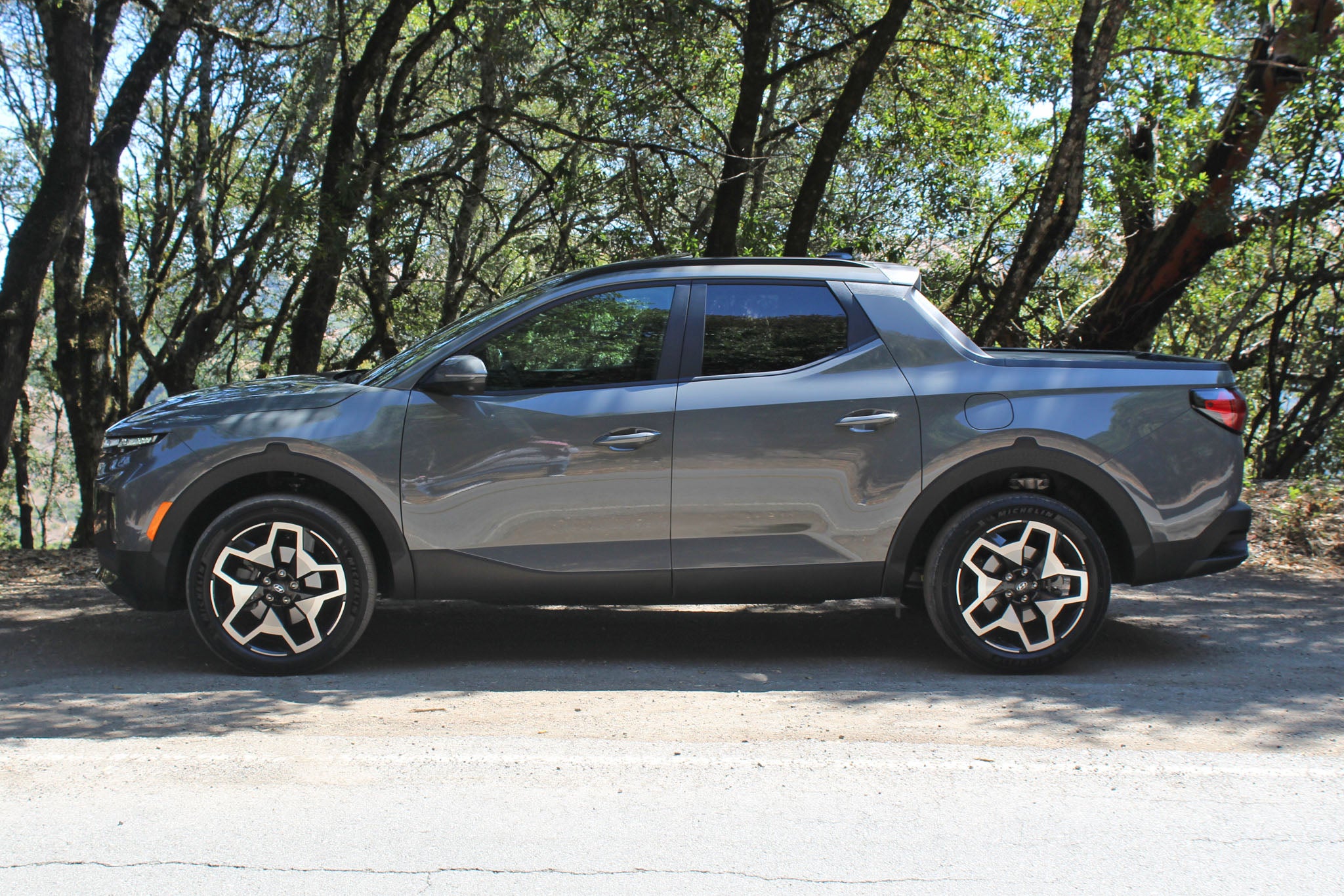 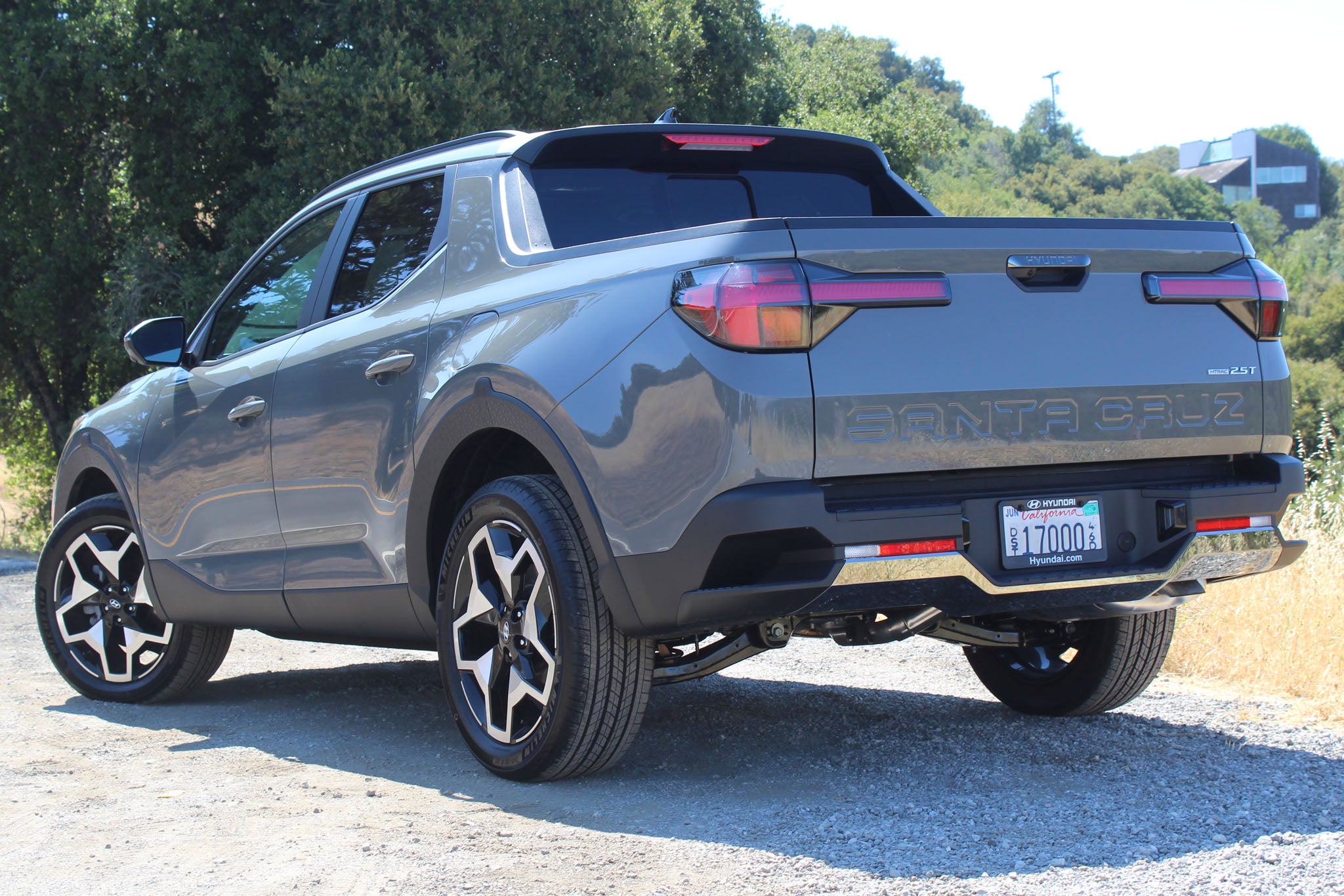 The utility portion of the bed is sort of a necessary add-on, though, as I don’t think many people will be taking these things to job sites. The bed—and indeed the rest of the vehicle—is designed to be the ideal machine to take you, your friends, and all their outdoorsy things wherever they want to go. A four-foot bed isn’t great for plywood, but add a tonneau and it is great for backpacks, hiking gear, sandy stuff from the beach, you name it. With the tailgate down you can even put a reasonably sized dirt bike in the back, as Hyundai made sure to show me. Also, anything you can’t fit in the bed, you can probably haul. The Santa Cruz can tow 5,000 pounds with the turbocharged 2.5-liter engine. That’s no joke for a funny little crossover.

This abuse-ready cargo area doesn’t mean the Santa Cruz is uncivilized in the cabin, though. Far from it. The top trim “Limited” vehicles come with a slew of luxury features like a heated steering wheel, ventilated leather seats (neither an option on lower trims), and heated seats (available on every trim beside the base model). There’s also connectivity tech like wireless Android Auto and Apple CarPlay, both of which are standard features, as well as a 10-inch infotainment screen. As far as standard equipment is concerned, the Santa Cruz is impressive with its entry-level $25,175 price.

Hyundai/Kia’s suite of driver assistance technology is available as one might expect, but much of it is included no matter what. Lane-keep/lane-follow is standard, as is regular cruise control. The only driver-assist feature left to pay up for is radar-enabled “Smart Cruise Control,” which serves mainly to ease driver load in stop and go traffic and congested areas. SCC is only available on the highest trim, but that being said, Hyundai’s lane-keep/lane-follow works as well as comparable systems. Regular cruise control is just fine for many drivers, myself included. 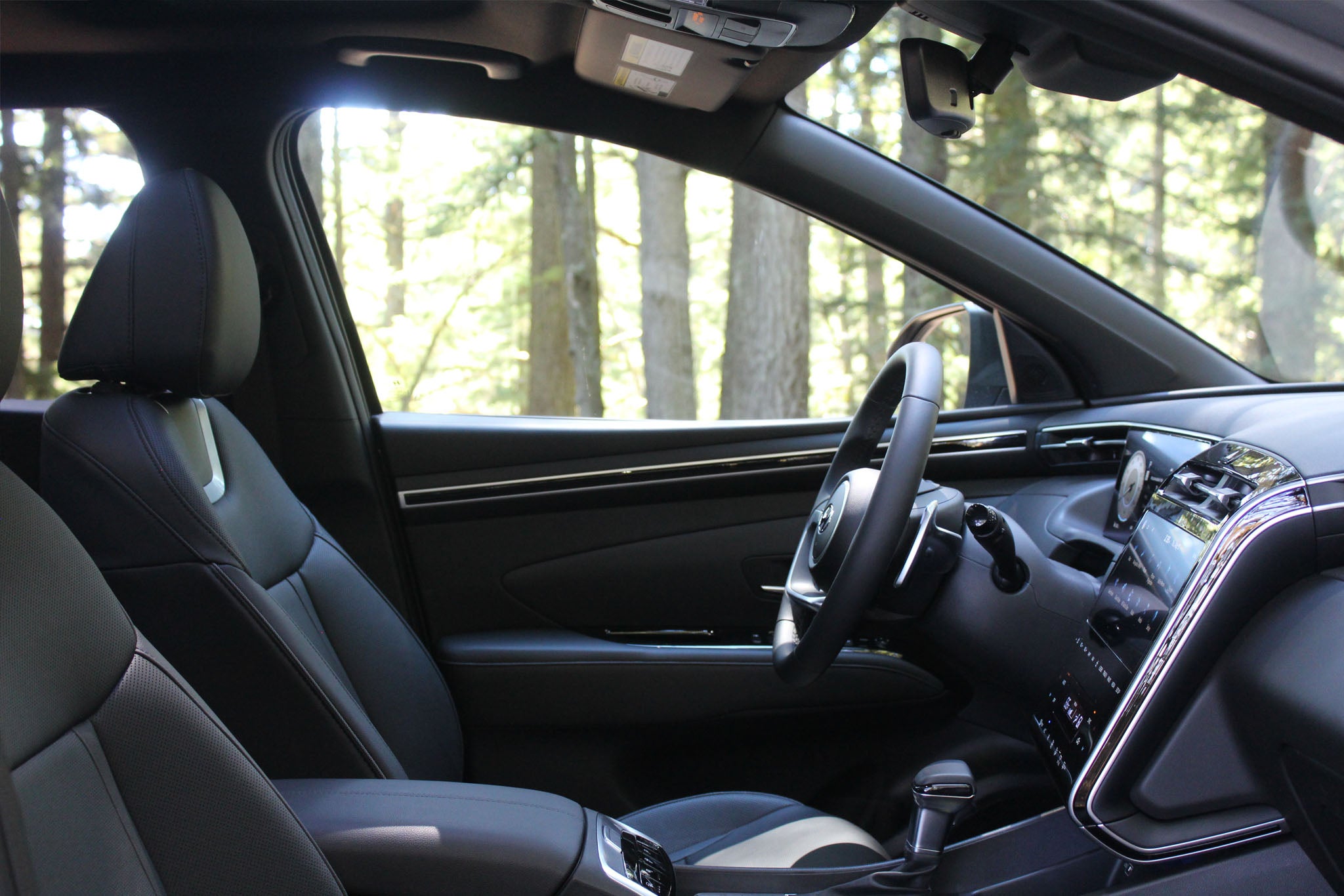 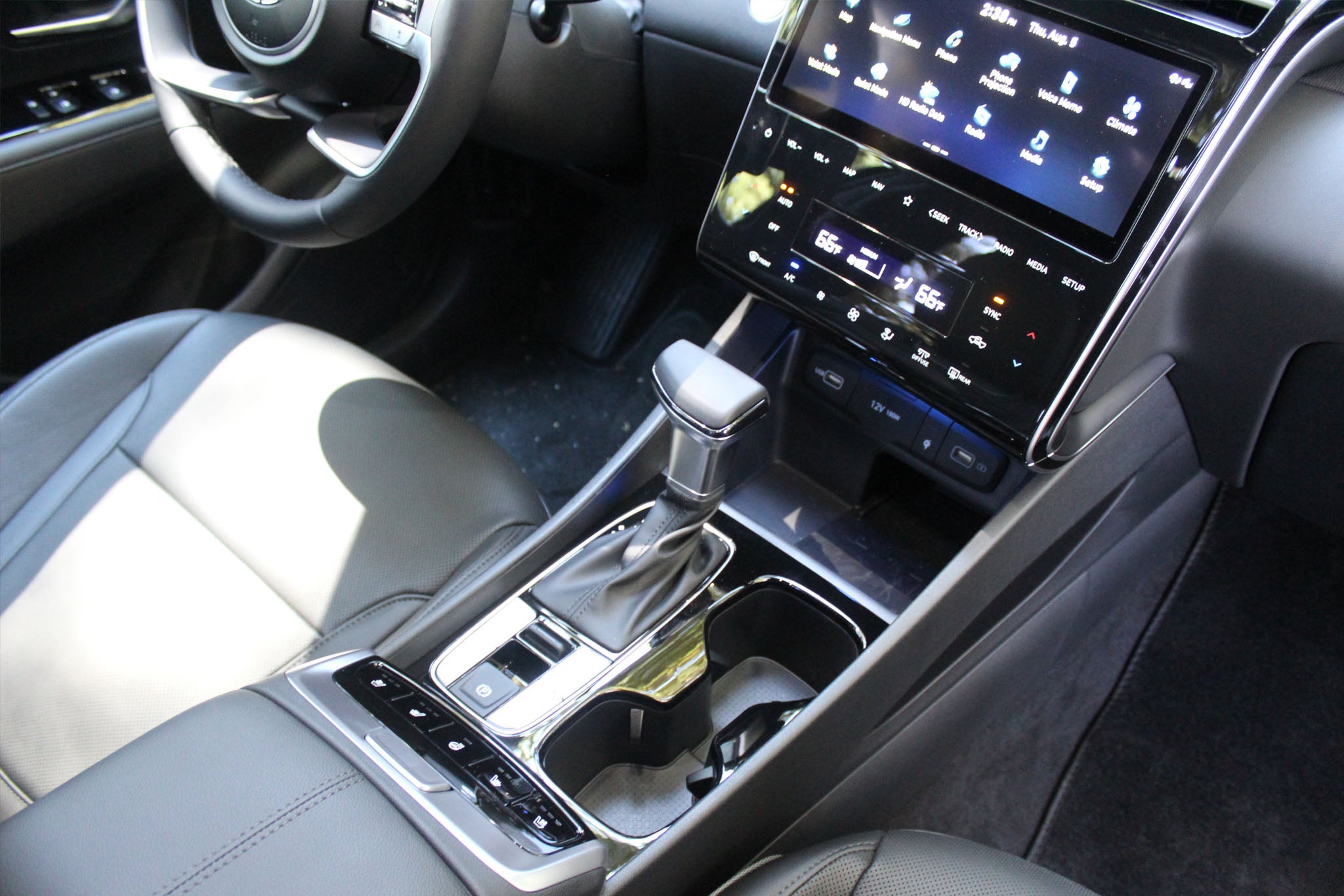 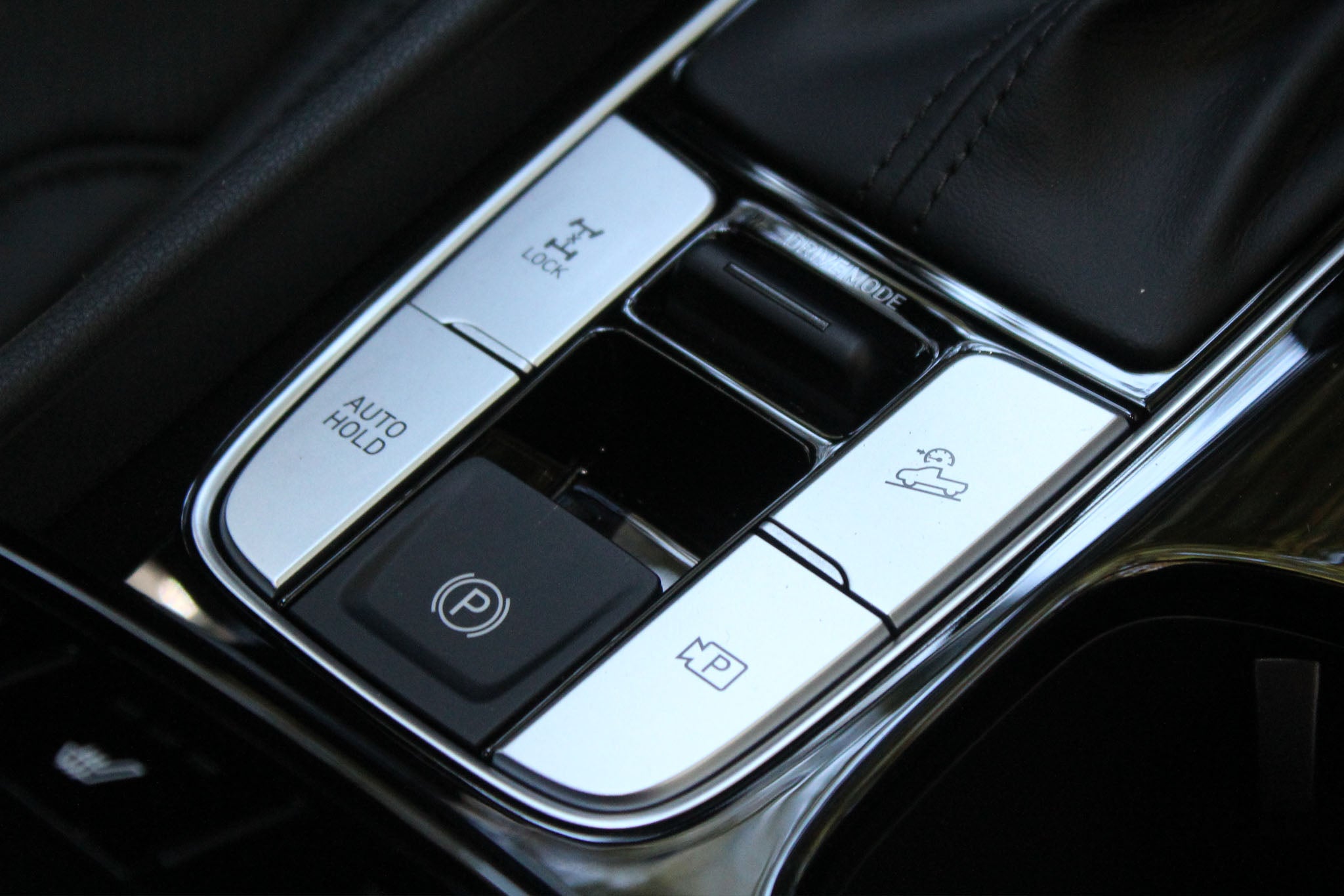 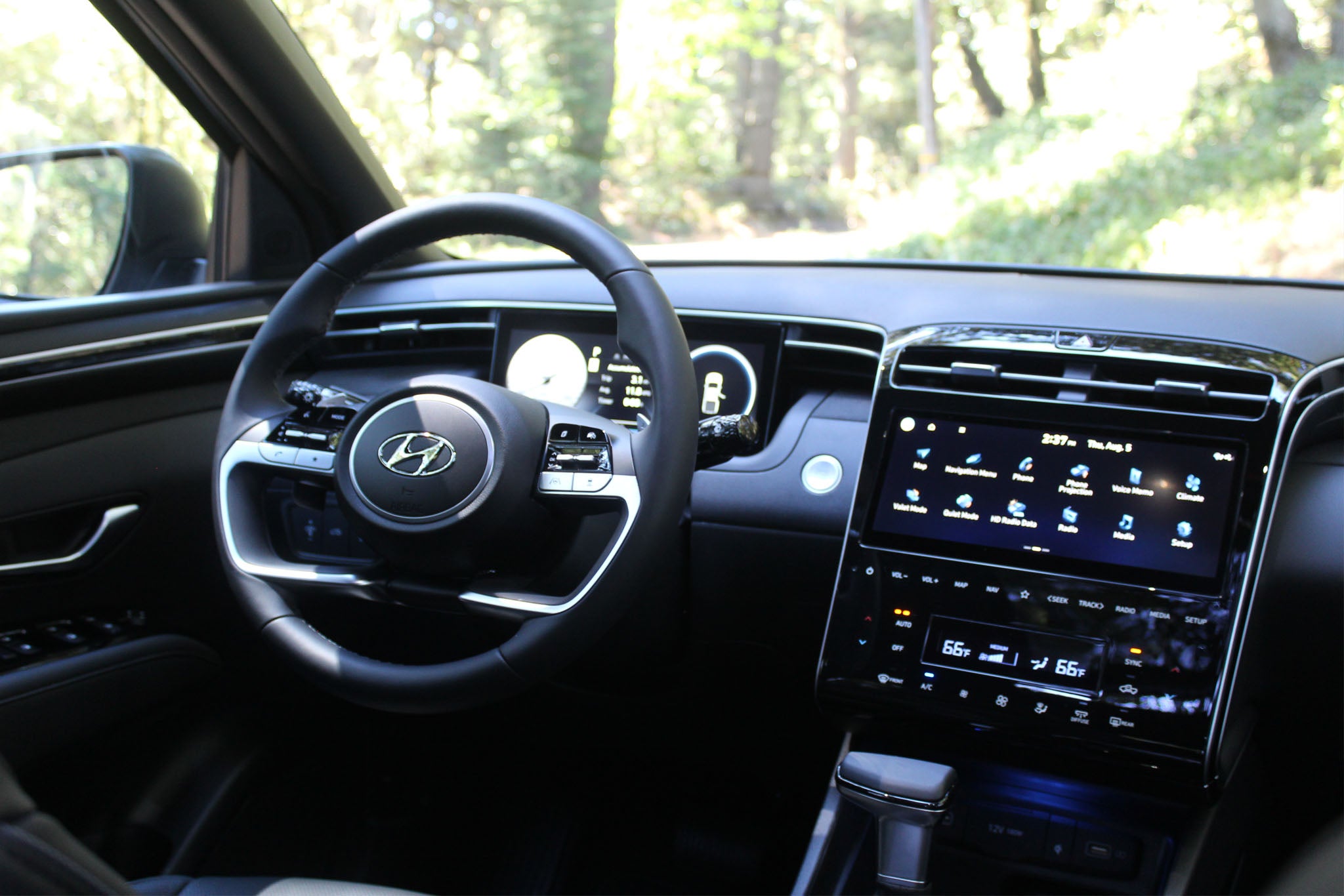 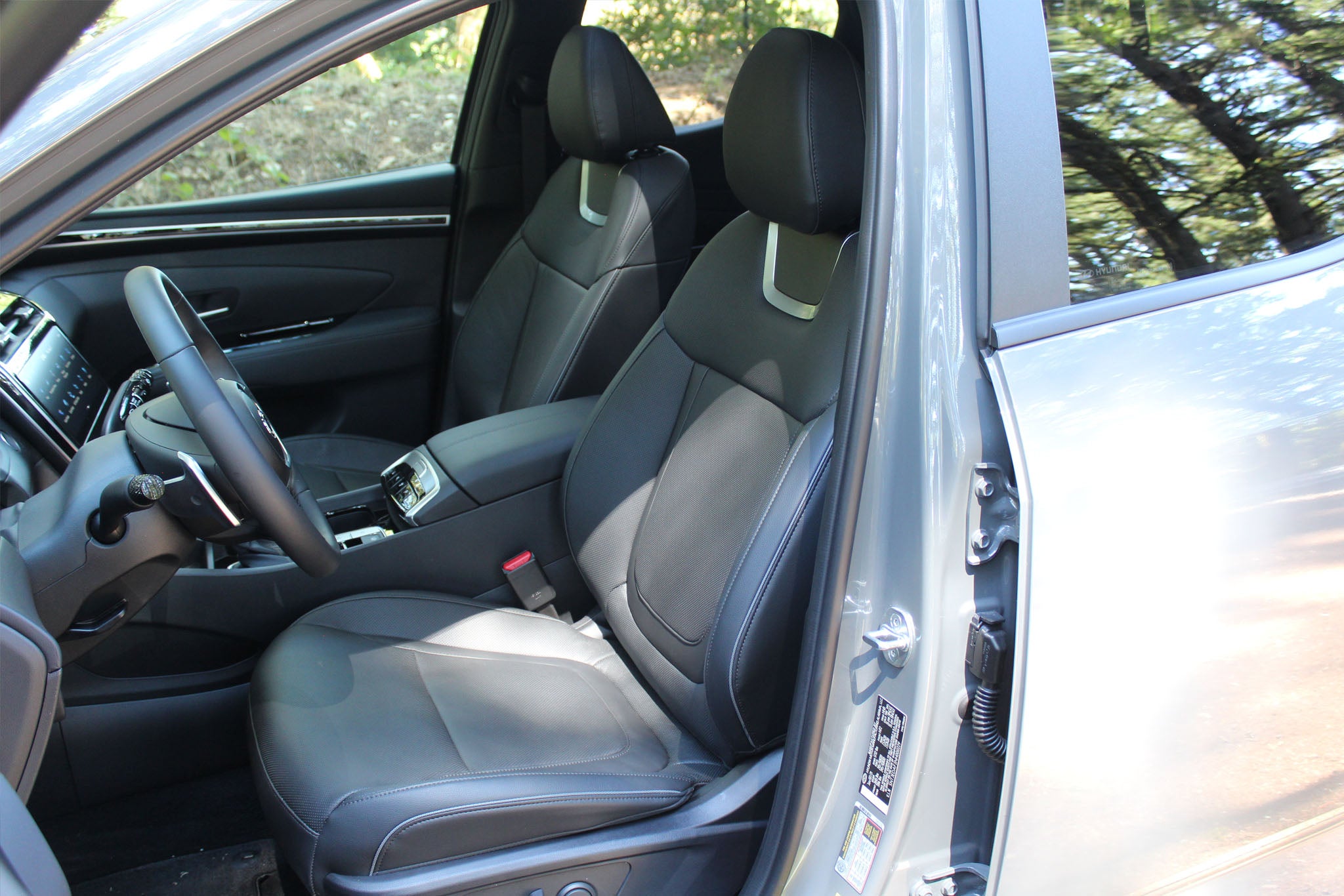 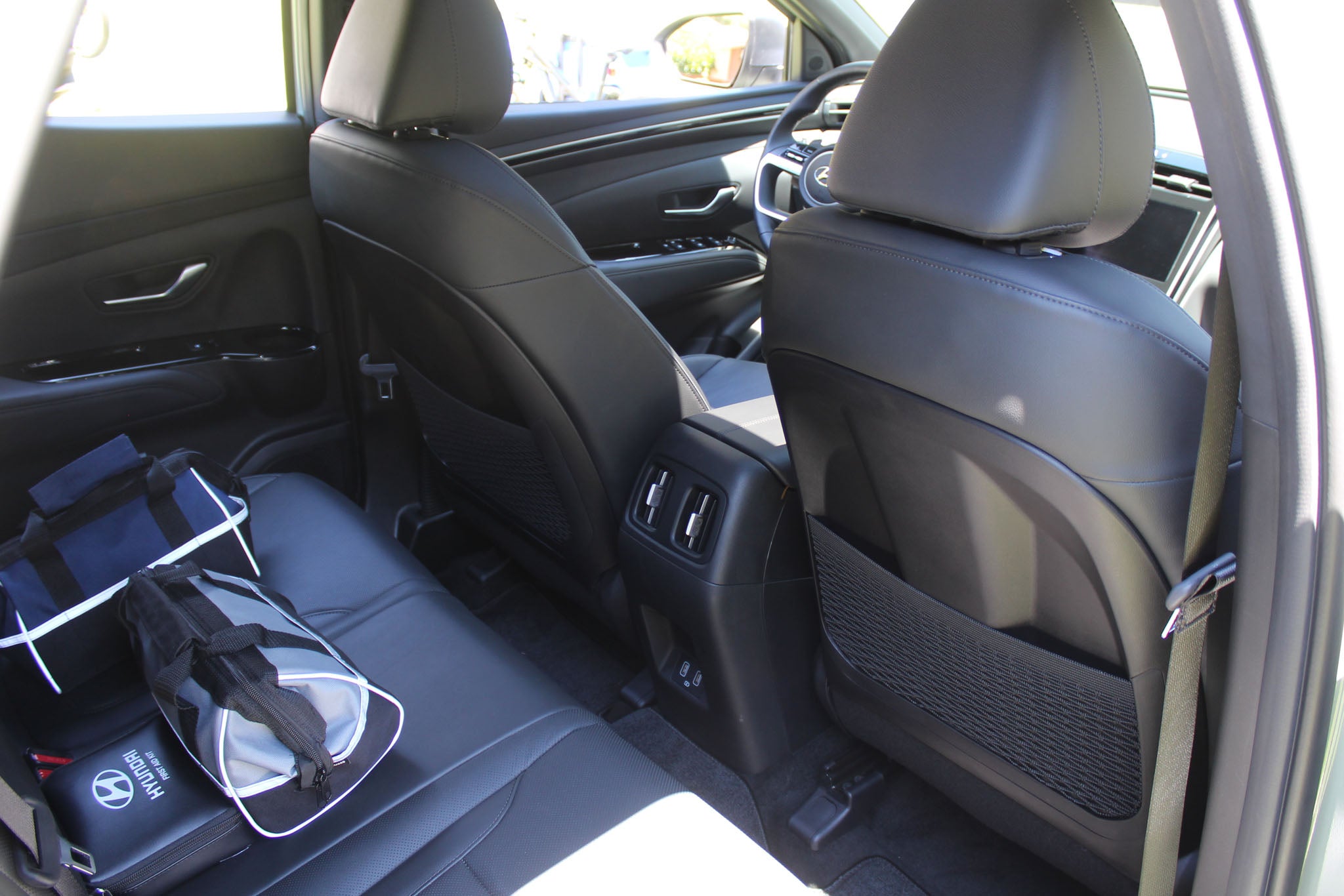 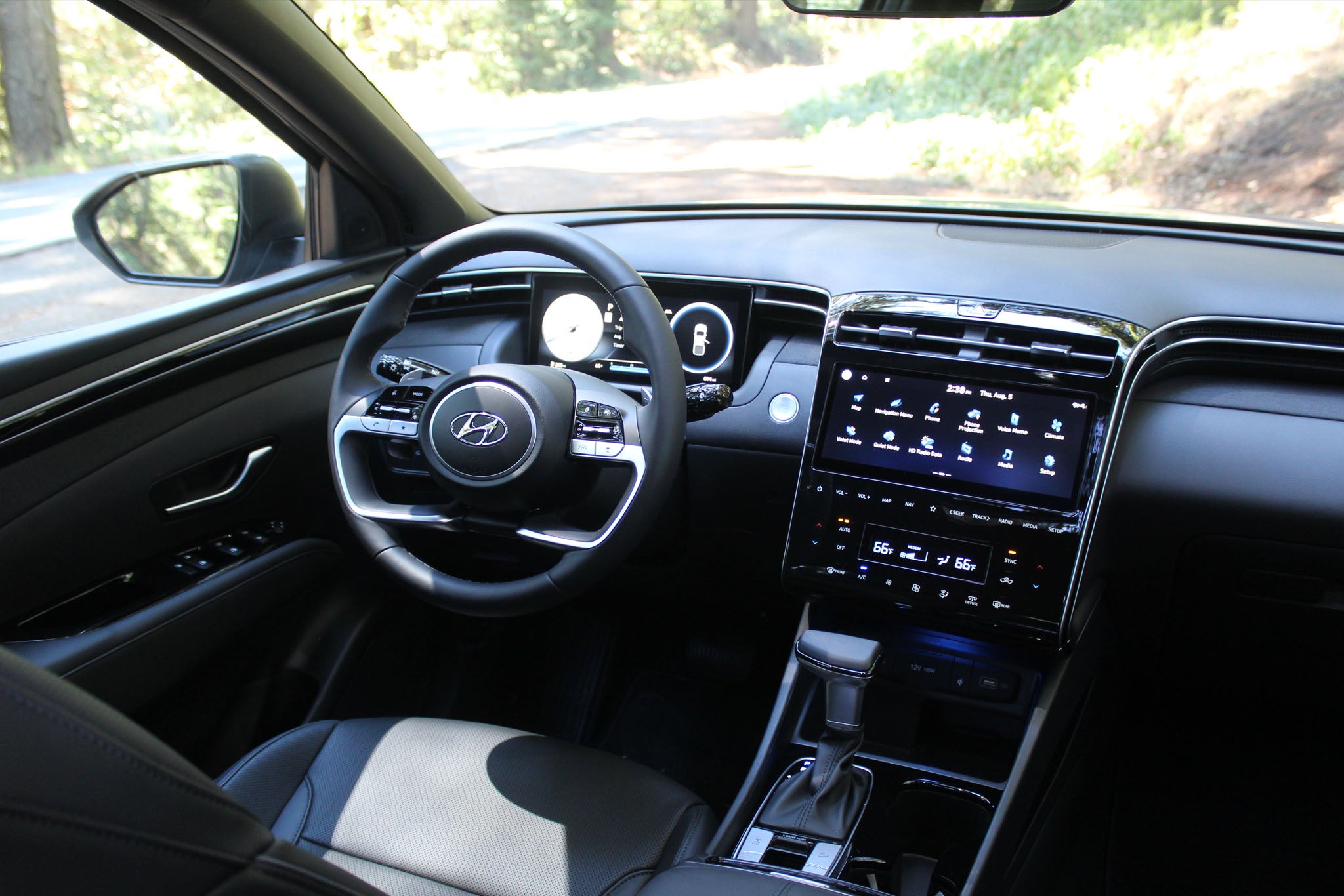 The Santa Cruz I borrowed was fully loaded. Instead of the big 10.25-inch screens shown above (instrument cluster and center stack), you’ll get smaller ones if you opt for a cheaper model. You’ll also be missing features like wireless charging, although both the driver and passenger get a USB port to themselves as standard, as well as a 12-volt outlet to share. Back seat passengers will miss the rear-mounted USB ports unless you go for the top-dog Limited model, but at least they can get those HVAC vents if you’re willing to spring for the second-highest SEL Premium trim. In any case, rear legroom is acceptable unless you’re sitting in the middle. I’m around five-ten and fit back there fine.

I did have one interior gripe which you cannot option away, though. There was no volume knob, just capacitive buttons instead. You could hold them down to turn the volume higher or lower rapidly, but stop me if you’ve heard this one before: A knob would’ve just been better. All of the buttons on the center console are like this. But on the plus side, for those wondering, the un-hooded instrument cluster screen is bright enough so that it never washes out, even in the blinding California sun.

This mostly pleasant interior worked together with driving dynamics that went above and beyond the call. The 2.5-liter, turbo-equipped Santa Cruz had more than enough horsepower and torque for passing and merging. The same engine is found in the Kia K5 GT and Hyundai Sonata N-Line, although this time around, power is sent to all four wheels with an optional locking center differential. 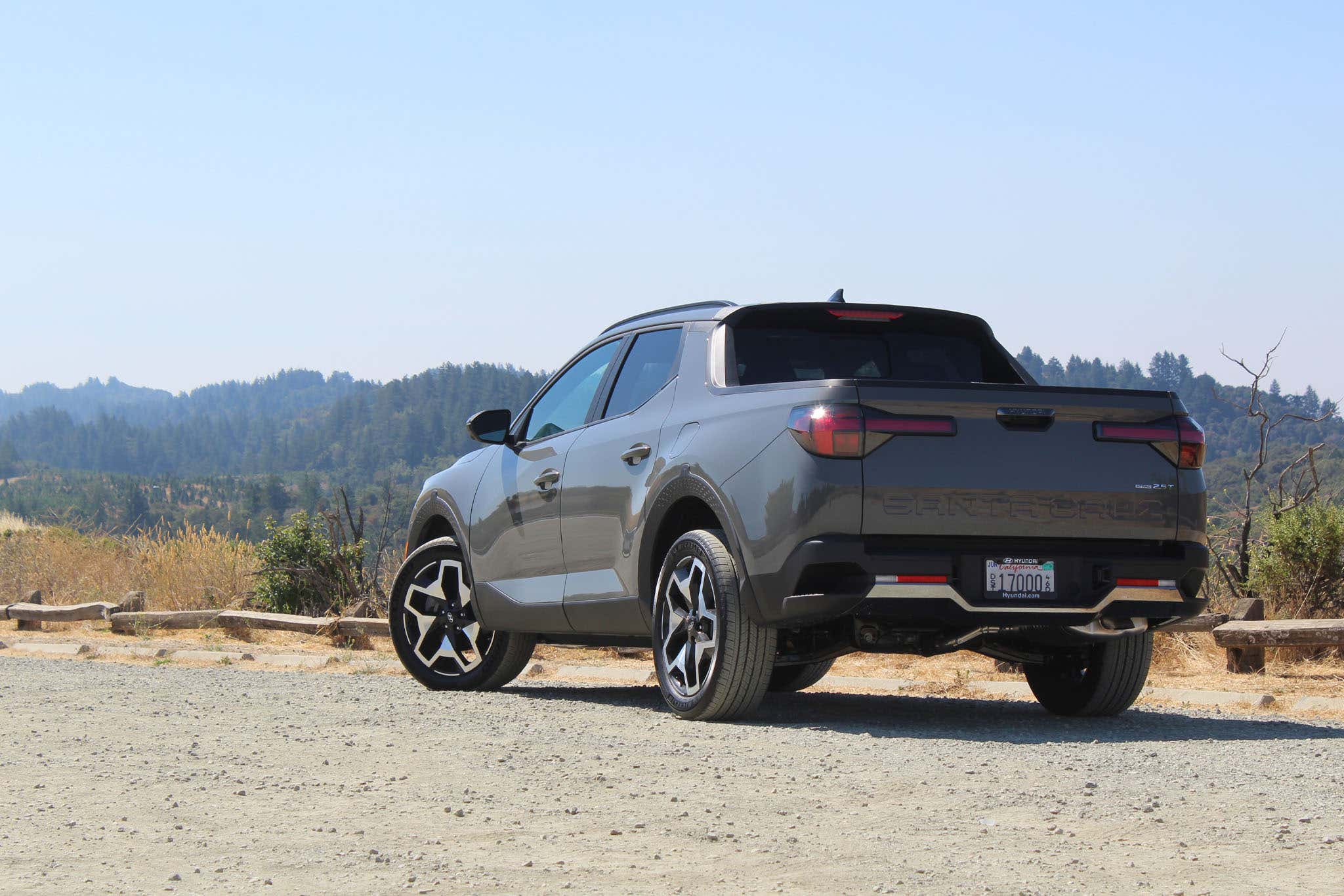 The eight-speed DCT doesn’t fire off shifts as it does in Hyundai’s sporty sedans, but it changes gears smoothly and responsively when you ask. Handling-wise, the Santa Cruz drove like a small crossover, with limited body roll and a pleasant ride. It never beat me up, even with the optional 20-inch wheels, responding to deeper potholes with a soft, muted impact, and handling undulating road surfaces without feeling boaty.

In tighter drive-thrus, it felt a little big, but it was more than manageable. I also wasn’t worried about riding up on curbs and doing any damage. This thing could handle that. On tight mountain backroads, it felt reasonably light and was tossable when you wanted it to be. In fact, in the tossability department, it exceeded my expectations and definitely didn’t feel like a truck. There’s really nothing about the driving experience to harp on, with above-average visibility aiding maneuverability in places like parking lots and tight city lanes.

In a suburban setting, the Santa Cruz rode just like a relaxed crossover. I didn’t get a chance to take it on some unpaved roads, but I suspect the truck will probably take you up a fire road just fine. Add a more aggressive tire and it would probably do a lot more than that. 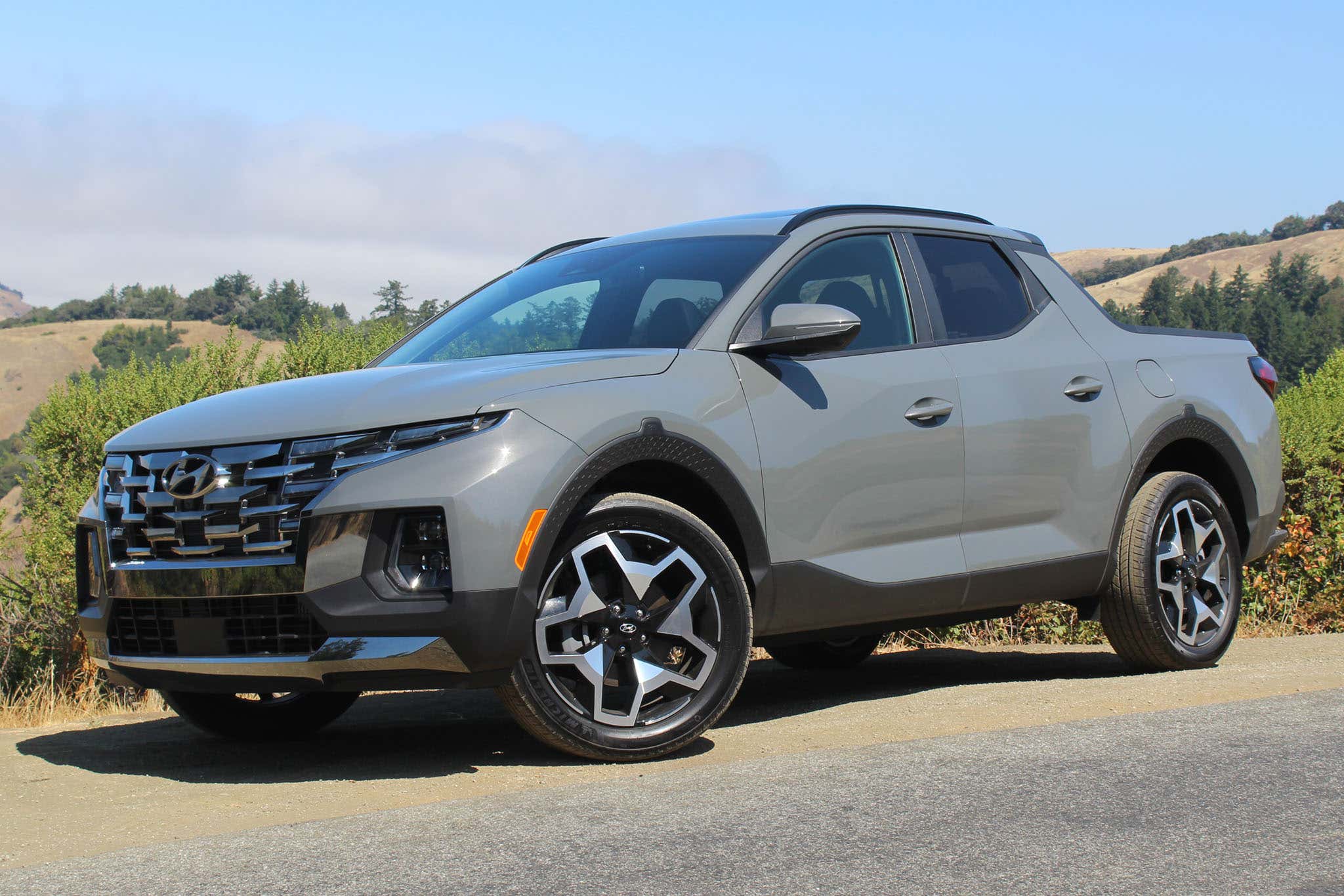 In fact, driving the Santa Cruz around just taking pictures of it felt like a good time to use the bed. It’s like a little mobile recreational area, not a space to cut up 2x4s or carry a bunch of gravel. Crack it open, take a seat, just relax. A few times, I wished I had a lawn chair and some non-alcoholic beverages. Just having a bed, even if it’s as short as 4.3 feet, raised the question of, “What can I do with this?” and not, “What can’t I do?”

Doing more is really what the Santa Cruz is about. On paper, it’s a capable crossover with a variety of trimmings you would expect on such a vehicle. But by adding the bed, what you perceive you might do with it naturally changes. It has a lot in common with the Hyundai Tucson, but it’s clearly not a Tucson. You don’t think of it as a run-of-the-mill crossover anymore.

Hyundai representatives liked to call it a “Sport Adventure Vehicle.” I’m not sure if I would use such an unabashed marketing term in cold blood, but I get where they’re coming from. You don’t need a body-on-frame truck with a long bed to do the sort of stuff the Santa Cruz can do, and pretty much everyone besides forum warriors and YouTube commenters know that. You can also actually park and maneuver the Santa Cruz with ease, unlike most other pickups with long beds and tall hoods. This vehicle would work well for people who live in a city and want to escape to the great outdoors on the weekends. It has that dual personality, built-in. 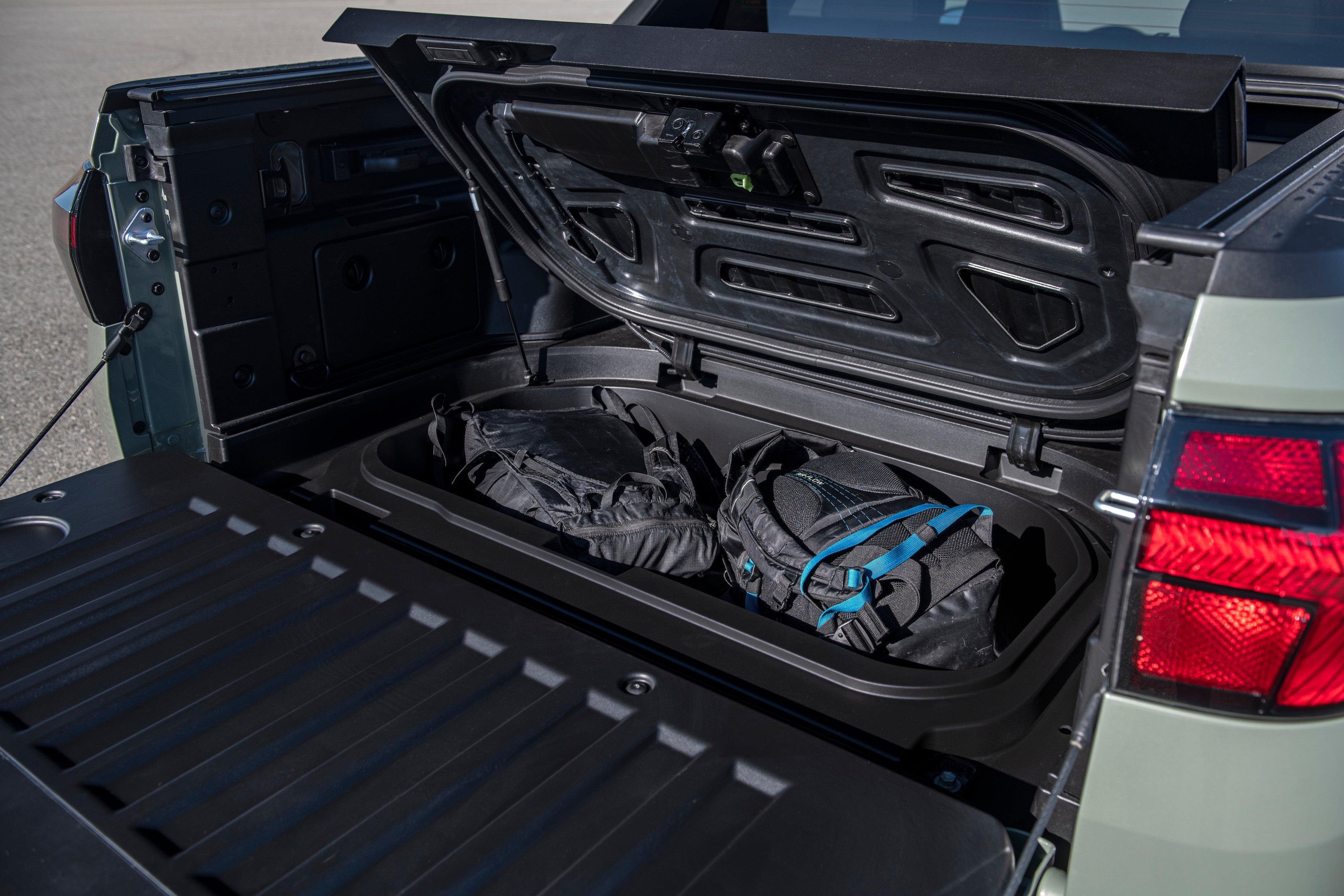 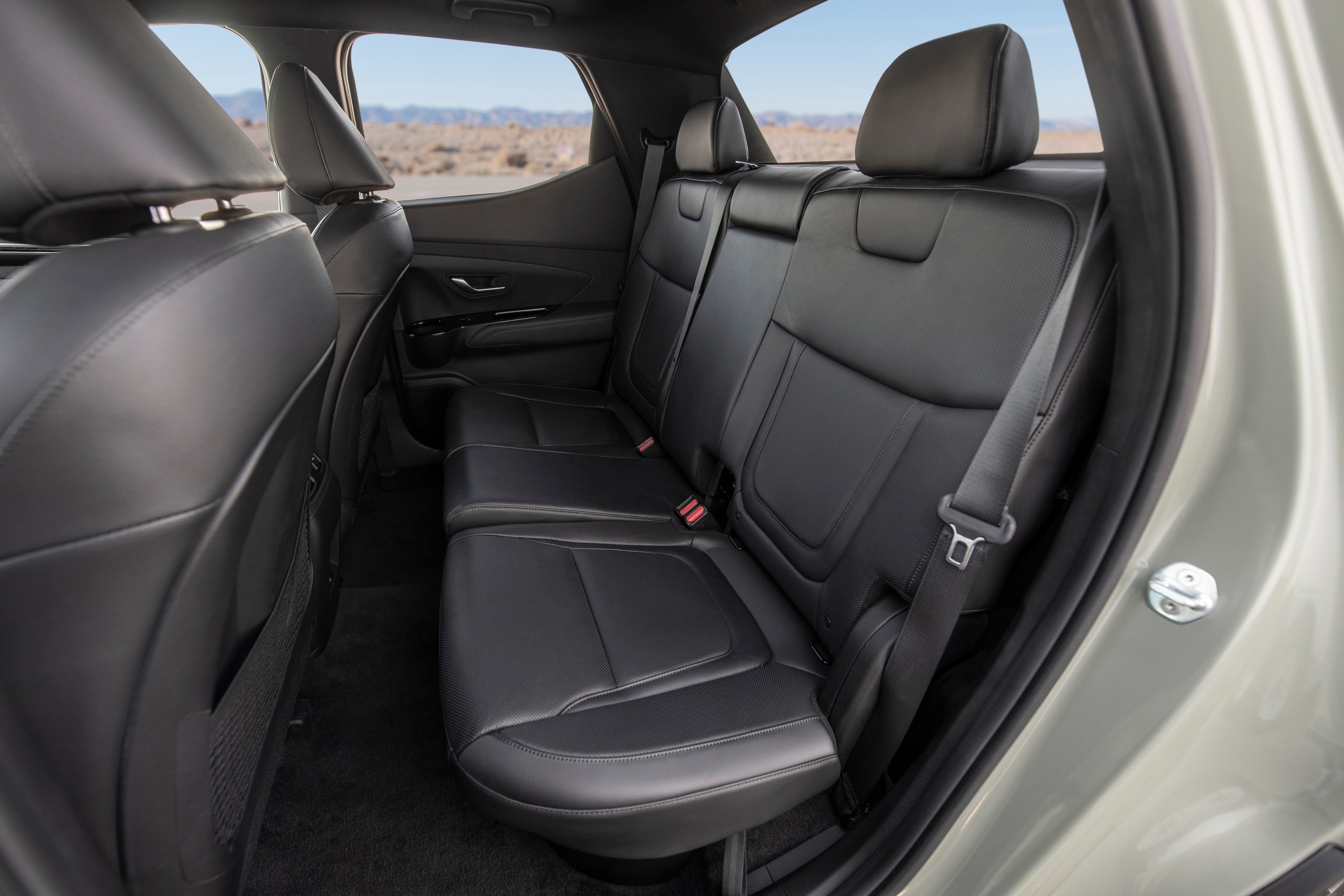 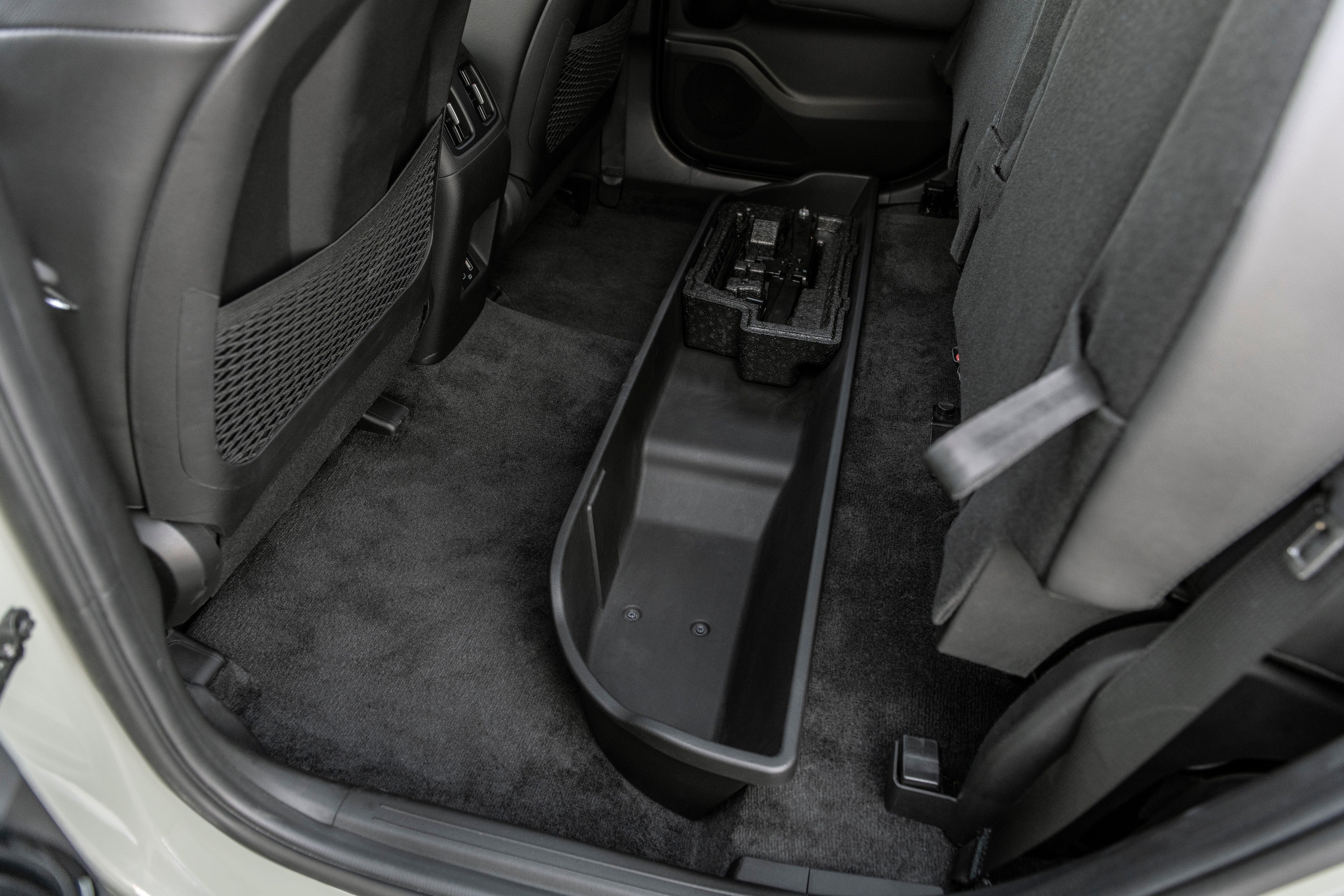 In my mind, no one is going to buy the Santa Cruz by accident. Somebody may walk into a Hyundai dealer and leave with a Kona instead of a Venue, but they’re not going to buy an admittedly strange quasi-pickup truck named after a beach town in California without some serious consideration first. In that sense, it could very well become a cult classic.

The Santa Cruz may not necessarily take a bite out of Ford’s Maverick sales; more likely it will steal customers from Subaru, the Bronco Sport, and other off-roady, active-lifestyle types of machines. In that space, it’s not only a solid contender with a good value, but also an unusual car that justifies its weirdness in charming ways. If you’re not a traditional pickup buyer but find yourself yearning for pickup-bed use only sometimes, the Hyundai might be for you.