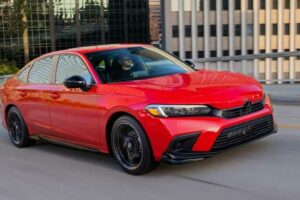 Well, now Honda‘s just showing off. Despite five model years packed under the 10th-gen Civic‘s timing chain, the company appeared to have little incentive to fully revamp its subcompact sedan superstar for the 2022 model year. The outgoing car, in all of its many permutations, remained at the top of its hyper-competitive segment. Heck, a simple midcycle refresh would have likely ensured it held onto the leaderboard crown until the model’s production tooling wore out. Instead, the manufacturer created the 2022 Honda Civic, one of the greatest redesigns we didn’t know we wanted.

At face value, the new 2022 Civic immediately addresses one of its predecessor’s few rough spots by rounding out and nip/tucking the insectoid Transformer-tastic styling.  Think of this glow-up as the Civic taking after big bro Accord, wearing its older sib’s more mature hand-me-down duds in place of its collection of anime graphic tees.

The Accord’s sleek, tapered vibe slips snugly over the prior Civic’s bones, pushing the A-pillars back by about 2.0 inches, complemented by a nearly 1-inch drop in the front beltline. Both height and width are unchanged—at least on the sedan—but overall length stretches by 1.3 inches and the wheelbase extends an extra 1.4 inches. The cutting continues in the rear, with 1.2 inches lopped from the area beneath the C-pillar.

Honda claims this improved dash-to-axle ratio imposes a bit of a rear-wheel-drive stance to the front-wheel-drive Civic, but we just think it looks right. We’ll hardly lose sleep over the removal of the outgoing car’s garish crab-claw taillights, and we welcome the suppression of the wacky-for-the-sake-of-being-wacky attitude.

This aesthetic shift bleeds into the cabin, as well. The same reduction in exterior stylistic noise turns the prior fighter-jet-aggressive cockpit into a clean, modern environment. Much of the new surface linearity owes inspiration to the adorable and painfully chic Honda e (lowercase!) subcompact EV sold outside the U.S., the Civic aping the e’s unbroken center-dash vent cluster and hanging control panel that harbors the Civic’s climate controls.

The space brims with small details that add up. Our favorite bit is the hexagonal honeycomb grille that stretches the length of the dash. It’s standard on all trims, a nifty design flourish that hides the air vents and adds a bit of uncharacteristic zhuzh. Aside from a small section to the left of the steering column, it’s one unbroken piece interrupted only by small joysticks that jut from square windows to control the concealed vents’ direction and airflow.

Overall, materials are not improved appreciably over the outgoing car, but that was never a particular weak point. Soft-touch plastic surfaces are cushy, and hard plastic controls are some of the segment’s best, alongside Mazda. The hard center console trim surrounding the shifter and cupholders is a pseudo-metallic textured plate that is wonderfully fingerprint resistant, a welcome shift from tired old piano black.

What’s the Deal With All of These Trims?

The new 2022 Honda Civic continues Honda’s trim hierarchy that eschews the traditional à la carte order sheet. So, if you want more features, be prepared to pay for the next highest trim. On the new car, the range-topping Touring trim is a significant jump over the runner-up EX.

Indeed, much of the new Civic’s “first-ever” headline tech is gated behind the Touring’s decklid badge. Most new Civics arrive with a nifty 7.0-inch infotainment touchscreen, but only the Touring gets a 9.0-inch unit. Both screens serendipitously wear physical knobs for both volume and tuning, along with a physical “Home” button. The Touring is also the exclusive recipient of a new 12-speaker Bose sound system—the first name-brand system ever offered in the Civic—alongside the nameplate’s first all-digital gauge cluster.

The latter is a nice upgrade. It’s not quite as configurable as VW’s Digital Cockpit, but it beats Hyundai’s. You can set the Civic’s virtual gauges as a pair of traditional circular readouts or push them to the outside of the screen as minimalist bar displays. Doing so also unlocks a small Easter egg in the form of an itty-bitty Civic in the center of the display that mirrors the exterior light inputs in real time. In other words, the mini Civic’s headlights, taillights, and blinkers correspond with the full-size thing. Cool stuff.

We spent the overwhelming majority of our seat time in a top-level Civic Touring sedan, both on the drive program’s curated route and during the following few days spent driving around the greater Los Angeles metroplex. This meant we made good use of the Touring’s 1.5-liter turbocharged four-cylinder, the Civic’s premium engine shared only with the aforementioned EX. The base-level LX and mid-level Sport buzz around with the familiar 2.0-liter naturally aspirated four-cylinder. Both engines come from the outgoing car. The 2.0-liter’s output is an unchanged 158 hp and 138 lb-ft of torque, and the 1.5-liter gets an extra 6 hp and 15 lb-ft, for 180 hp and 177 lb-ft.

Honda’s official stance says the 1.5-liter is rigorously reworked with a “new high-efficiency turbocharger and new turbo piping with reduced pressure drop, and a new 4-2 exhaust port/manifold cast into the head.” Sure, but the power and torque outputs are suspiciously identical to the 10th-generation Civic Sport Touring’s bespoke engine tune. The only caveat is the prior Sport Touring only offered 177 lb-ft when fitted with the manual transmission, whereas Sport Tourings with the CVT managed an unchanged 162 lb-ft.

Speaking of transmissions, the 2022 Honda Civic has one. Yup, just one. Regardless of engine or trim, the Civic sedan makes exclusive use of a continuously variable automatic transmission (CVT), meaning the enthusiast’s favorite and the dealer’s nightmare six-speed manual is nixed for the new car. Calm down, you three-pedal obsessives: If you’re patient, you can grab a stick in the forthcoming Civic hatch, alongside the manual-only Si and Type R variants. The Civic coupe, discontinued after the 2020 model year, remains dead for the foreseeable future.

Power to the People

The end result of these minor upgrades is, well, minor. Both the 2.0 and the 1.5 rev, pull, and sound as they did before. This means the sizable gulf between the engines returns, as well. The 30 minutes spent with the Sport revealed the standard engine is an adequate, if not a bit of a wheezy entrant in the segment. Honda worked hard to isolate both engines from the cabin with the nameplate’s first use of urethane foam, but there is simply no way around the combination of a CVT with a small engine. It’s better in the new car, but revving out the base engine on an entrance ramp or passing lane is an exercise in mechanical thrash, gnash, and bash.

There’s noticeably less NVH from the 1.5, but we think this is mostly a byproduct of turbocharging, and not really from any additional damping from Honda. That said, the Touring does include some extra insulation in the carpets and under the floor. If the 2.0 is adequate in power, the 1.5 is more so; although it’s the “bigger” engine, acceleration is best described as a notch above fine, as our derriere-dyno estimates a 0-60-mph run for the Touring at somewhere in the low 7-second range. Enthusiastic drivers should pick the Sport or the Touring—those are the only two trims Honda offers with the Sport driving mode and paddle shifters on the wheel, the former improving throttle mapping and the CVT’s simulated shift points.

For all the “meh” we have for the wholly inoffensive powertrains, the handling and overall chassis composure had us howling in a really, really good way. Honda brought along a 10th-gen Civic Touring sedan to the drive event, a car we regularly categorized as arguably the sharpest-driving non-performance compact car offered at any price. Heck, the same could be said for any of the 10th-gen Civic’s trims, regardless of what’s under the origami’d front hood.

Impressively, the 2022 Honda Civic sedan somehow makes its progenitor feel like a mushy bag of bolts unscrewed from a 1986 Cadillac. This revelation quickly turns unsurprising when Honda outlines the laundry list of structural improvements levied onto the new car.

Through a combination of adhesives and additional structural componentry, Honda claims an 8 percent increase in torsional rigidity and a 13 percent increase in bending rigidity. The suspension is retuned, as is the electric steering, and dimensionally, there’s an extra 0.5 inch added to the rear track.

On the viciously squiggly canyon roads that snake through Malibu, California, this all adds up to a fabulously tight little car. We quickly found the regular Civic sedan’s chassis significantly outpaces the Touring’s and the Sport’s standard 235/40 18-inch all-season tires. With a set of summers or even ultra-high-performance all-seasons, we reckon the Civic Touring would pull an impressive imitation of a Volkswagen GTI.

It feels solid. Inputs are Porsche-like in their weight and mapping, with a firm brake pedal and a reasonably snappy throttle. The electric steering is understandably light, but it’s neither overly quick nor artificial, with predictable load-up. Damping is almost hot-hatch tight and impressively smooth over broken pavement and regular surface streets, with a level of sophistication usually reserved for VWs or base-level compact luxury cars.

The Safe Choice, for More Than One Reason

If you’re less about how it drives and more about keeping everything shiny and safe, the 2022 Honda Civic has a solid suite of driver assistance systems, too, even on the basest-of-base LX trim. Every Civic trim’s safety nannies beep and flash at the driver, thanks to standard fare like forward-collision warning, lane-departure warning, collision mitigation, and road-departure mitigation. Also featured as standard is previously primo stuff like lane keep assist, adaptive cruise, automatic high-beams, and traffic-jam assist. Not bad for a Civic; the only Touring-exclusive active safety features are blind-spot monitoring with cross-traffic alert, and low-speed braking control.

Finding a major fault with the 2022 Honda Civic sedan during day-to-day driving is challenging. As a piece of egalitarian transportation, it’s spectacular. It’s comfortable and well equipped from the Sport to the Touring, with a smartly packaged and handsome, modern interior that complements the new dressed-down exterior aesthetic. It has no right to drive as well as it does, either. Still, our first order of business would be a well-timed purchase with Tire Rack so we might terrorize unsuspecting canyon-goers in their five-year-old hot hatches.