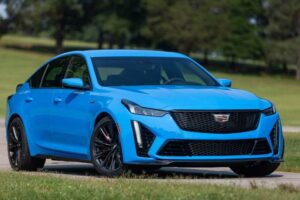 Let’s get right to it: The 2022 Cadillac CT5-V Blackwing is the only V8-powered sedan you can buy today with a manual transmission. Jump around and scream it from the mountaintops; get it out of your system. That you can row your own gears is wonderful in its own right, but I’d be remiss if I only focused on it and ignored the rest of what makes the car great. It’s a lot, just like the 668 horsepower output.

It is the spiritual successor to the old CTS-V, and it now adds the Blackwing title to its name—the “V” moniker no longer designates the highest-performance Cadillacs. That denomination now rests with “Blackwing” and despite the CT5-V Blackwing using a V8, no, it is not
the twin-turbocharged V8 that birthed the Blackwing name to begin with. Still following? 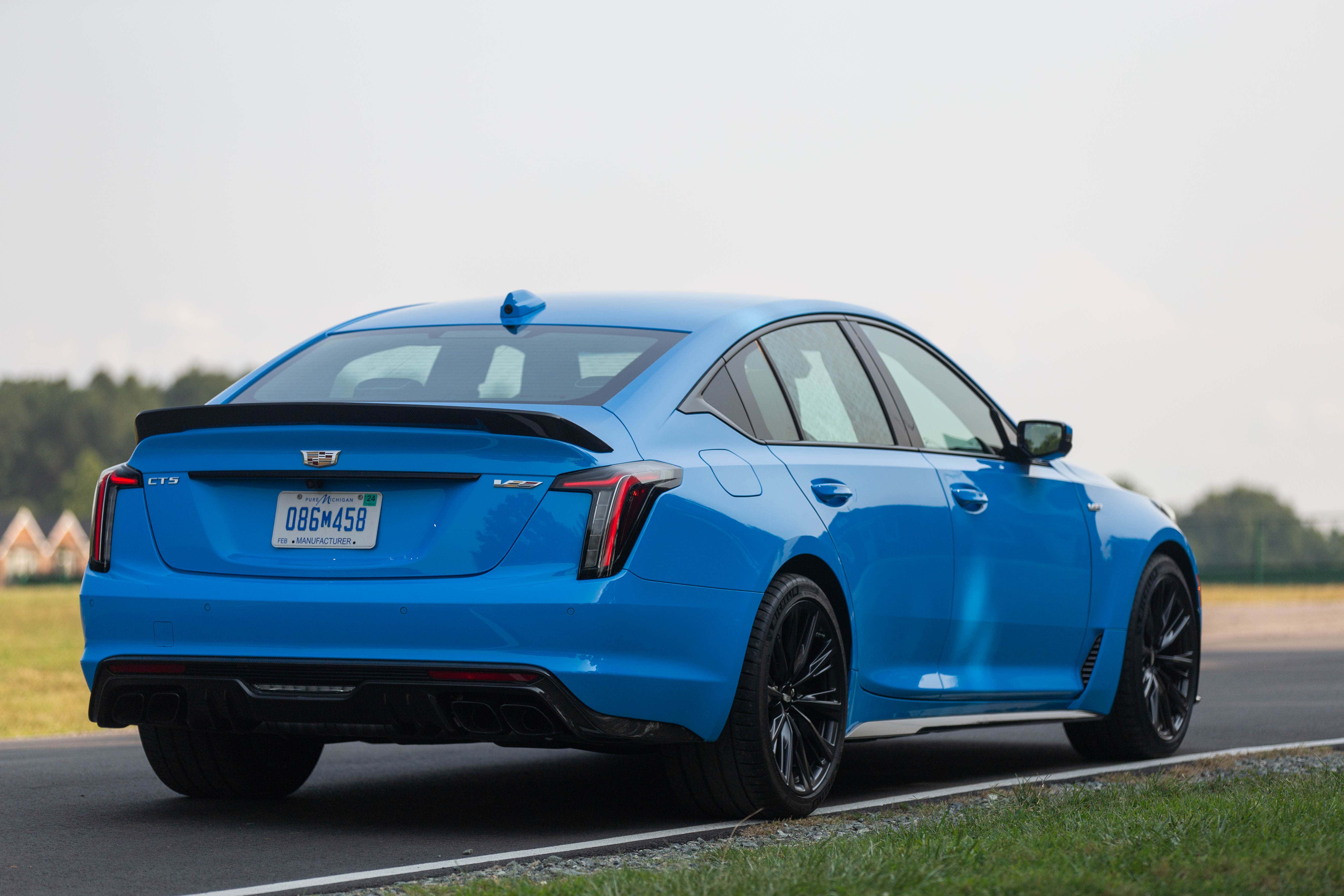 2022 Cadillac CT5-V Blackwing: By the Numbers

But no one who actually puts a deposit on a CT5-V Blackwing will care. The car’s reputation and specs far outpace its clumsy naming scheme. And it’s significant because this is the fastest and most powerful Cadillac ever made. It is also the “last intended internal combustion engine version of this car,” a Cadillac rep said during the car’s media preview event—in other words, probably the last-ever Cadillac super sedan that will run on gasoline. Seeing as Cadillac is pivoting to an electric future soon, the end is in sight I guess.

So this had better be a proper sendoff. Luckily, it is.

As with the CT4-V Blackwing, the CT5-V Blackwing is built on General Motors’ Alpha platform. Dimensionally, its wheelbase is 6.7 inches longer and its front track is 2.8 inches wider than the CT4-V Blackwing’s—extra length and width that translates most directly to noticeably increased legroom for rear-seat passengers. 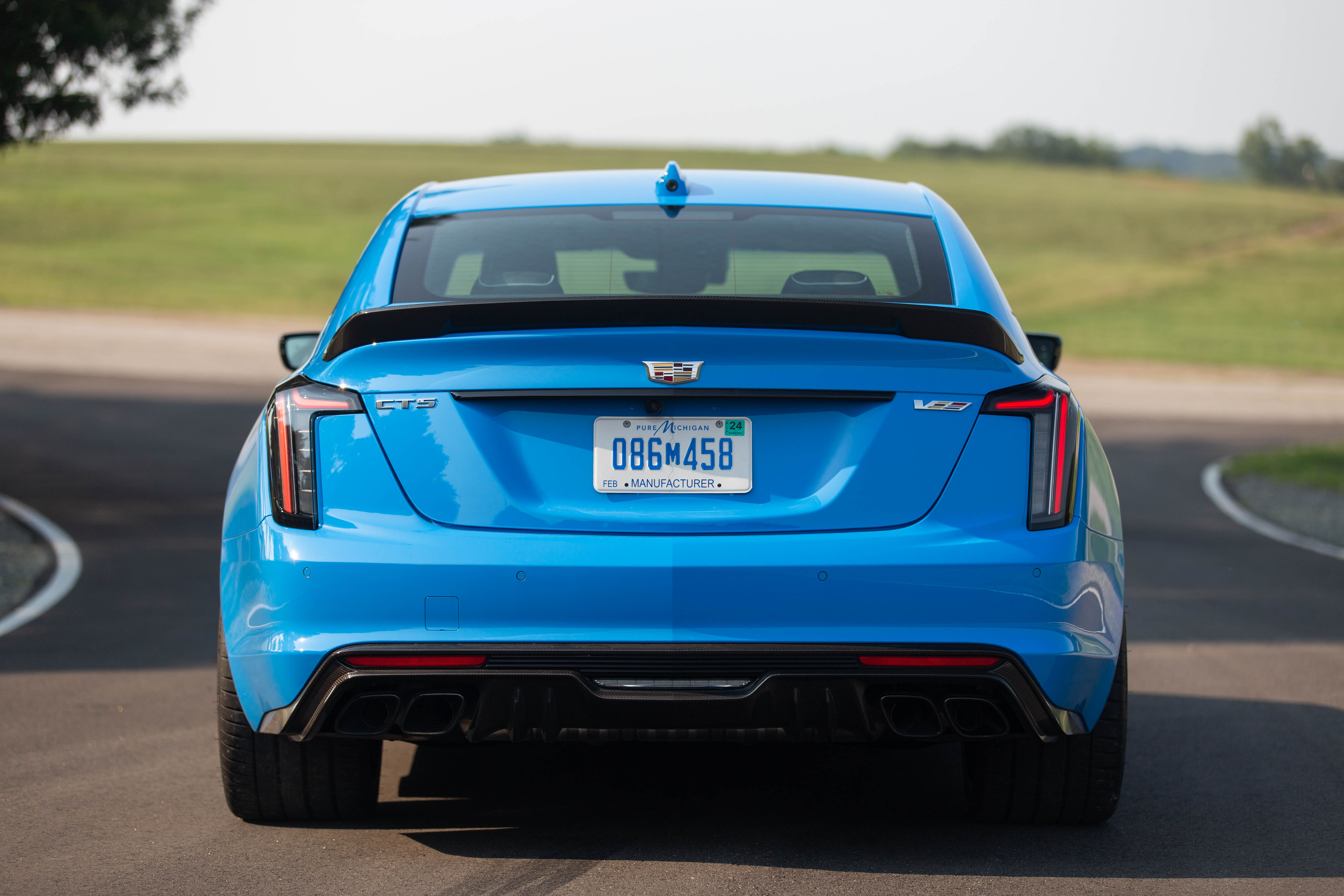 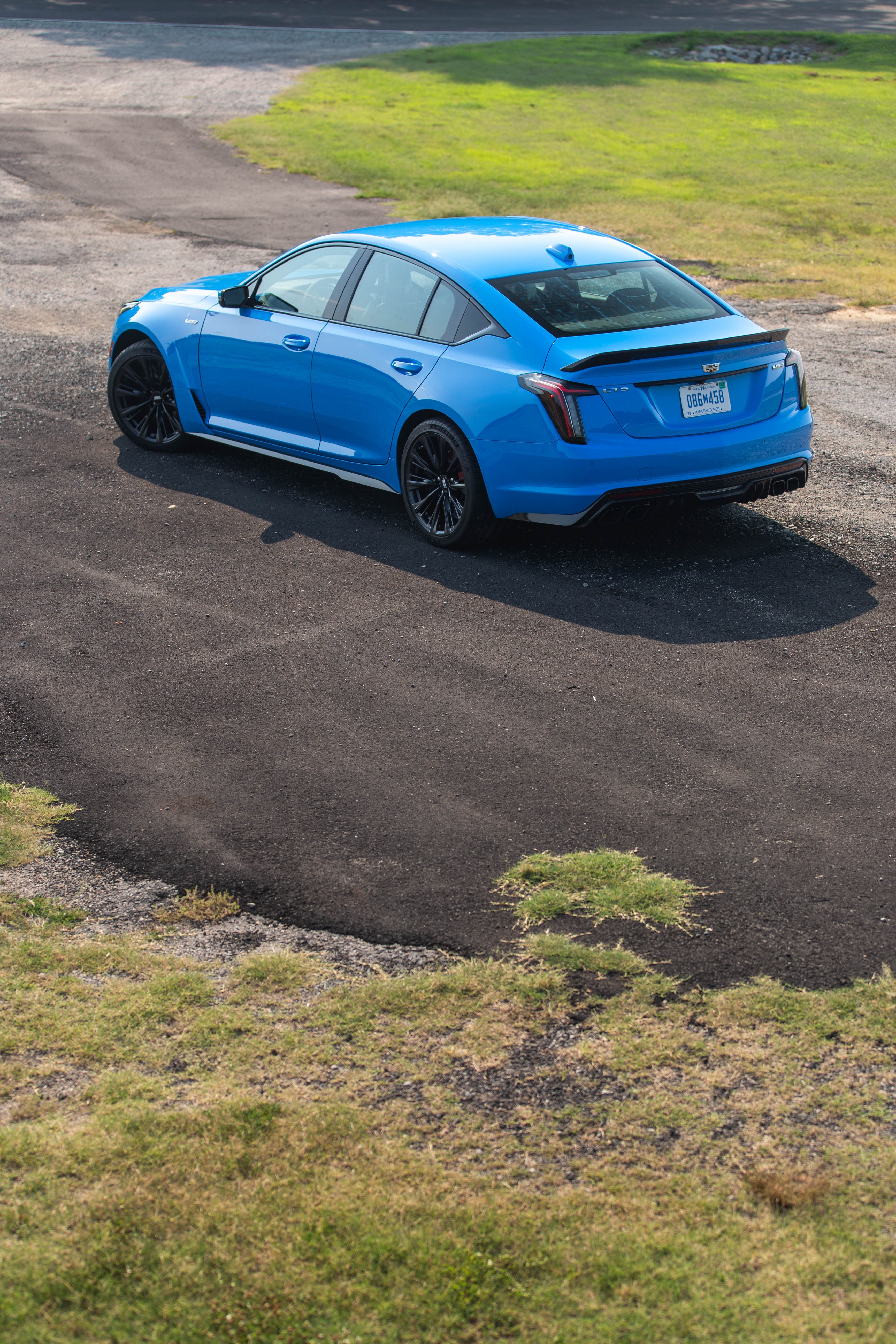 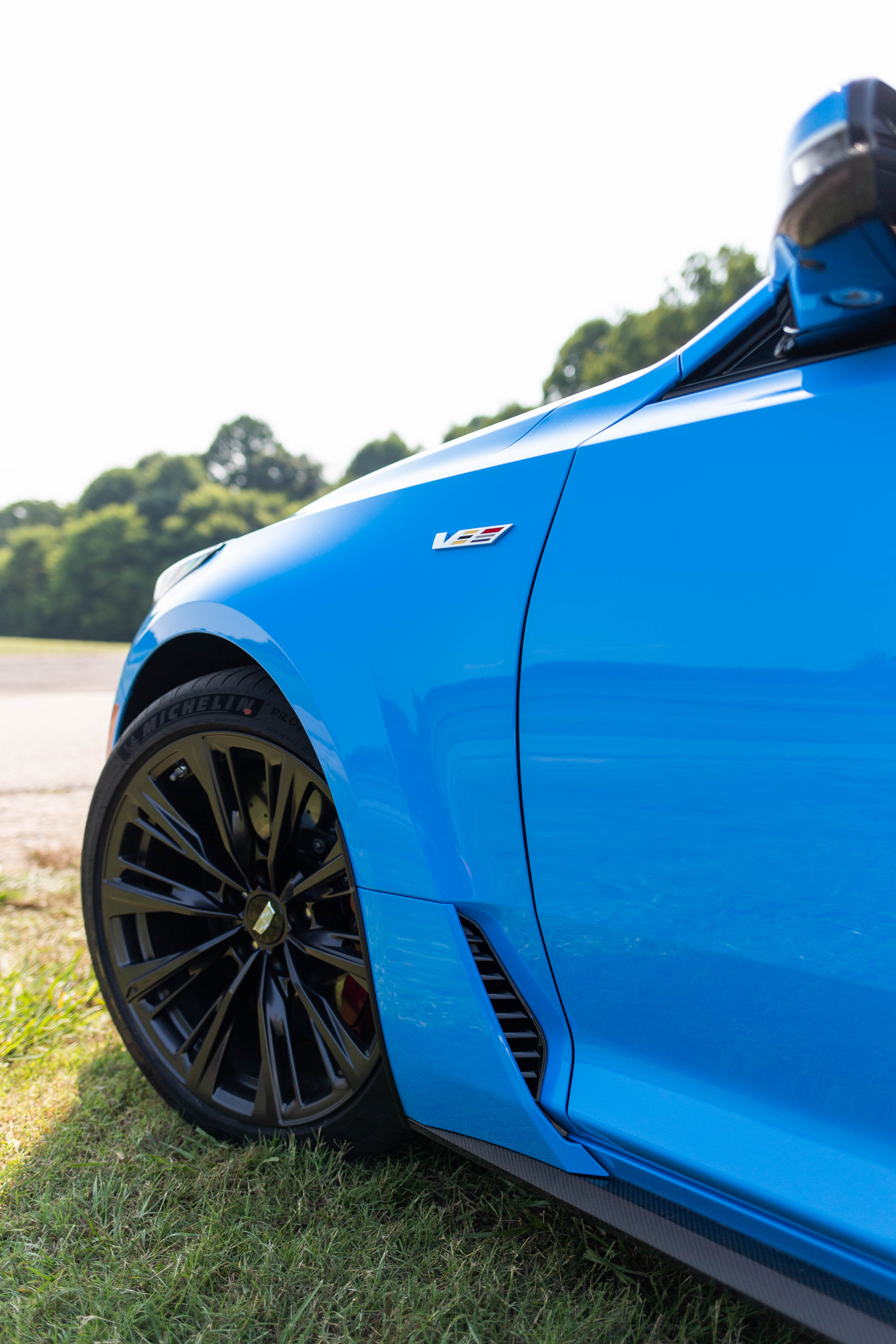 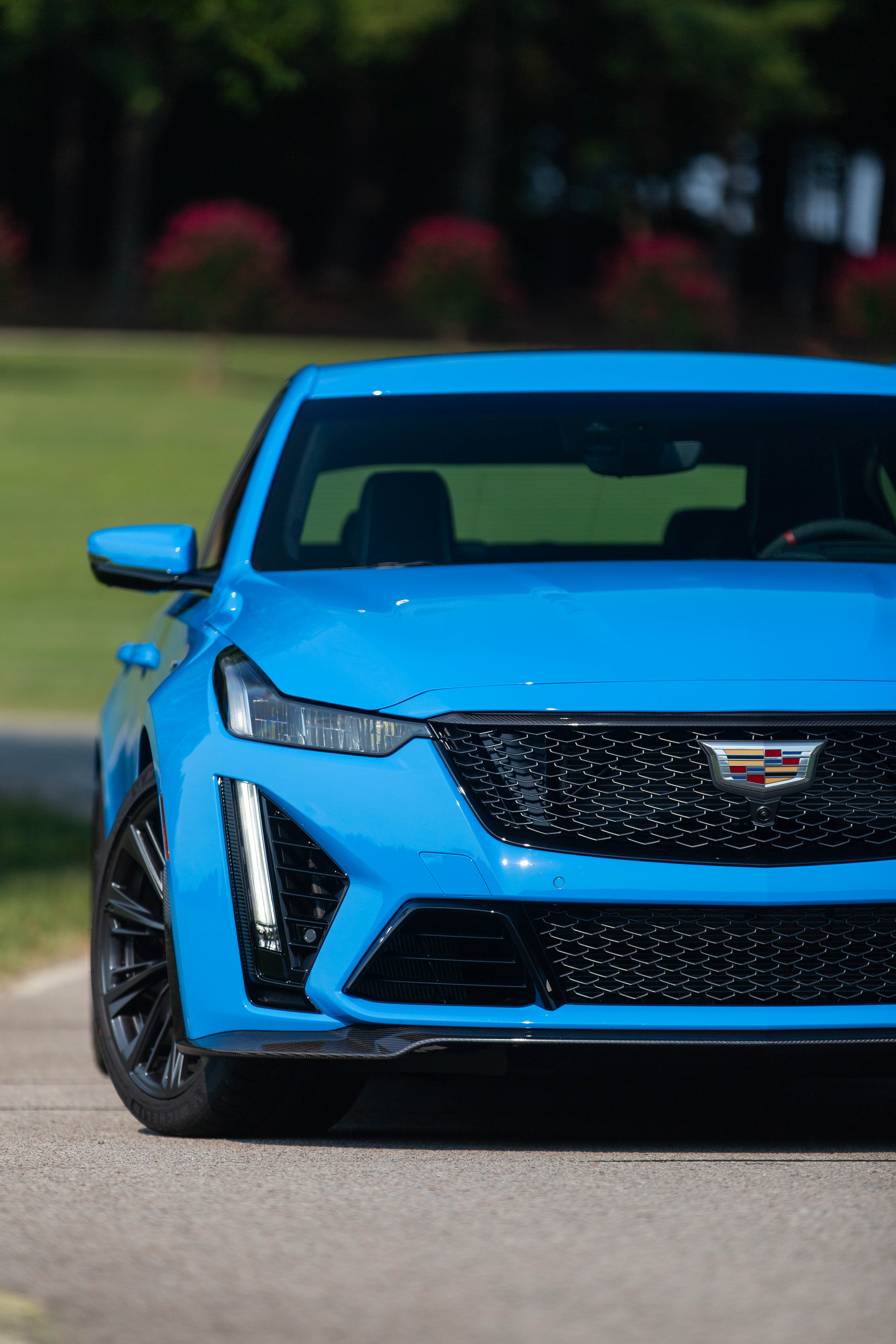 From its 6.2-liter, supercharged LT4 V8—crafted through the AMG-style “one engine, one builder” ethos that pervades GM’s Performance Build Center in Bowling Green, Kentucky—comes a claimed 668 hp and 656 pound-feet of torque. Outside, the looks are still distinctly, sharply Cadillac, but the car’s designers and engineers cut a bunch of holes and vents into its face to aid with even more improved cooling. They apparently did such a good job with the cooling in this regard that the CT5-V Blackwing does not require the hood extractor vent the old CTS-V had.

You’ll find the biggest brakes ever factory-installed on a Cadillac at all four corners—15.67 front rotors and 14.7-inch rear rotors—and an optional carbon-ceramic brake package for $9,000. These are surrounded by 19-inch wheels as standard that are further wrapped in a set of exclusively developed Michelin Pilot Sport 4S tires: P275/35ZR19s in the front and P305/30ZR19s in the rear.

Magnetic Ride Control 4.0 comes as standard on all models. To take corners better, the car now has an added shock tower brace and front- and rear-chassis reinforcement for extra rigidity and stiffness. A Tremec six-speed manual comes as standard, but you can option it out for a 10-speed automatic. 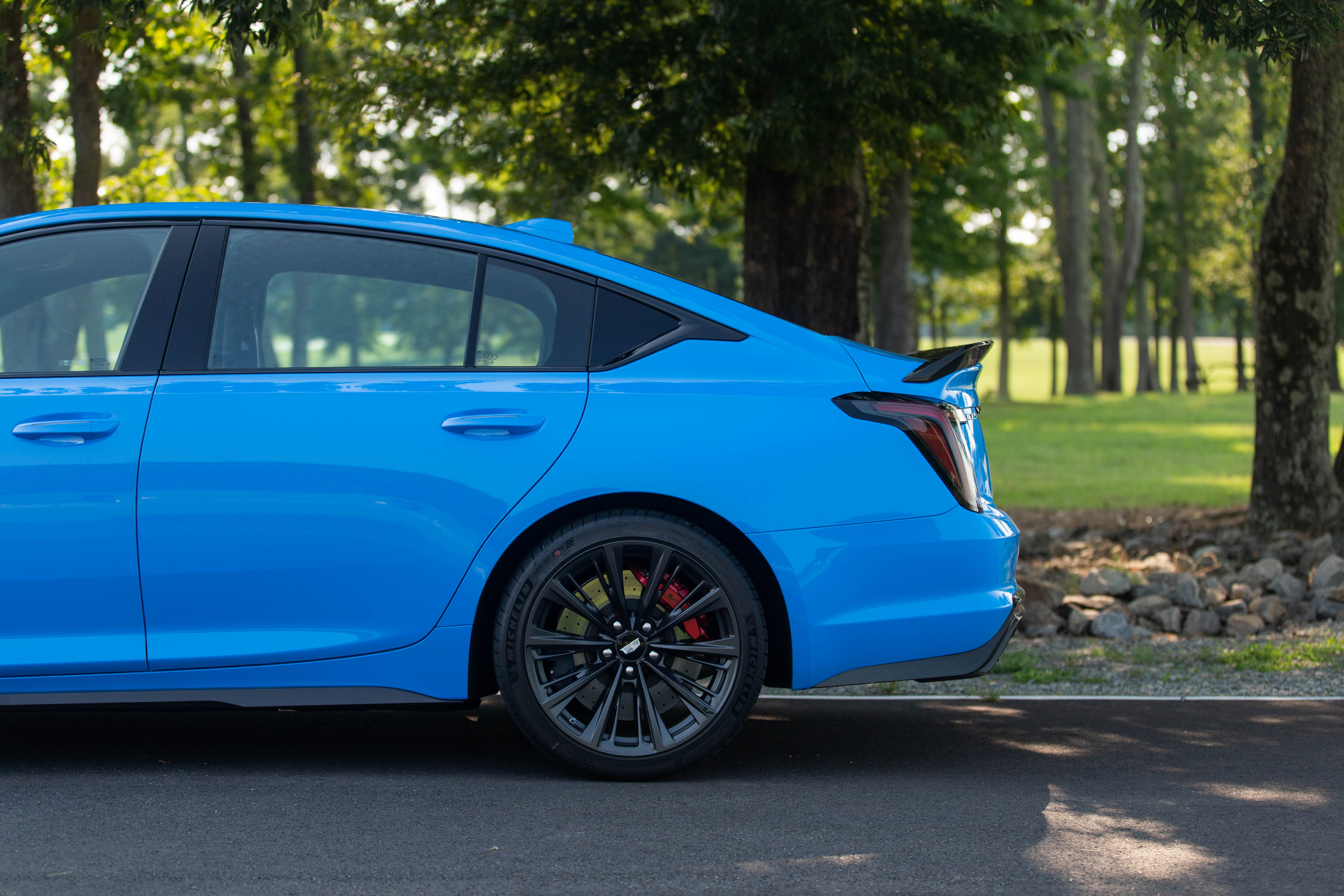 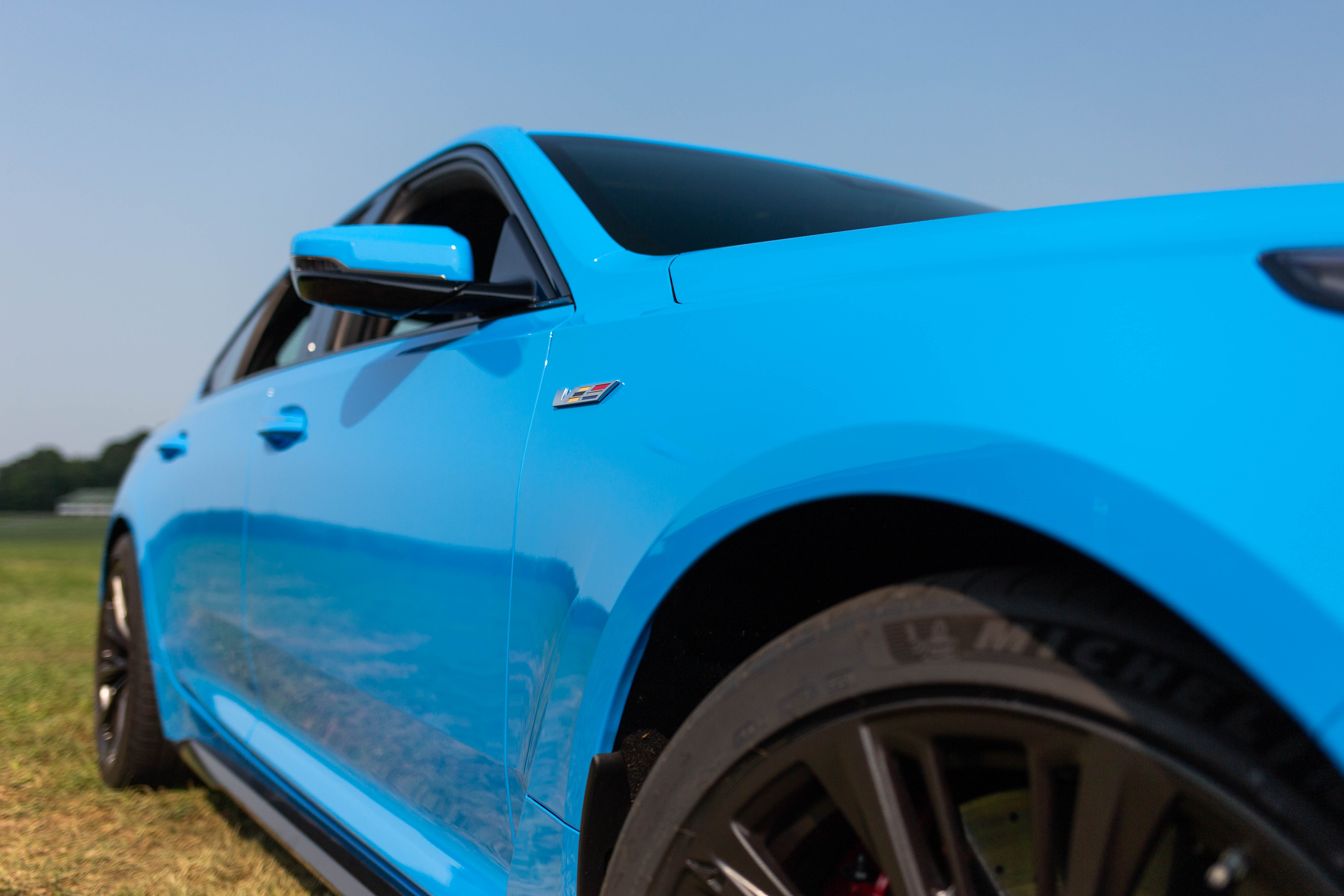 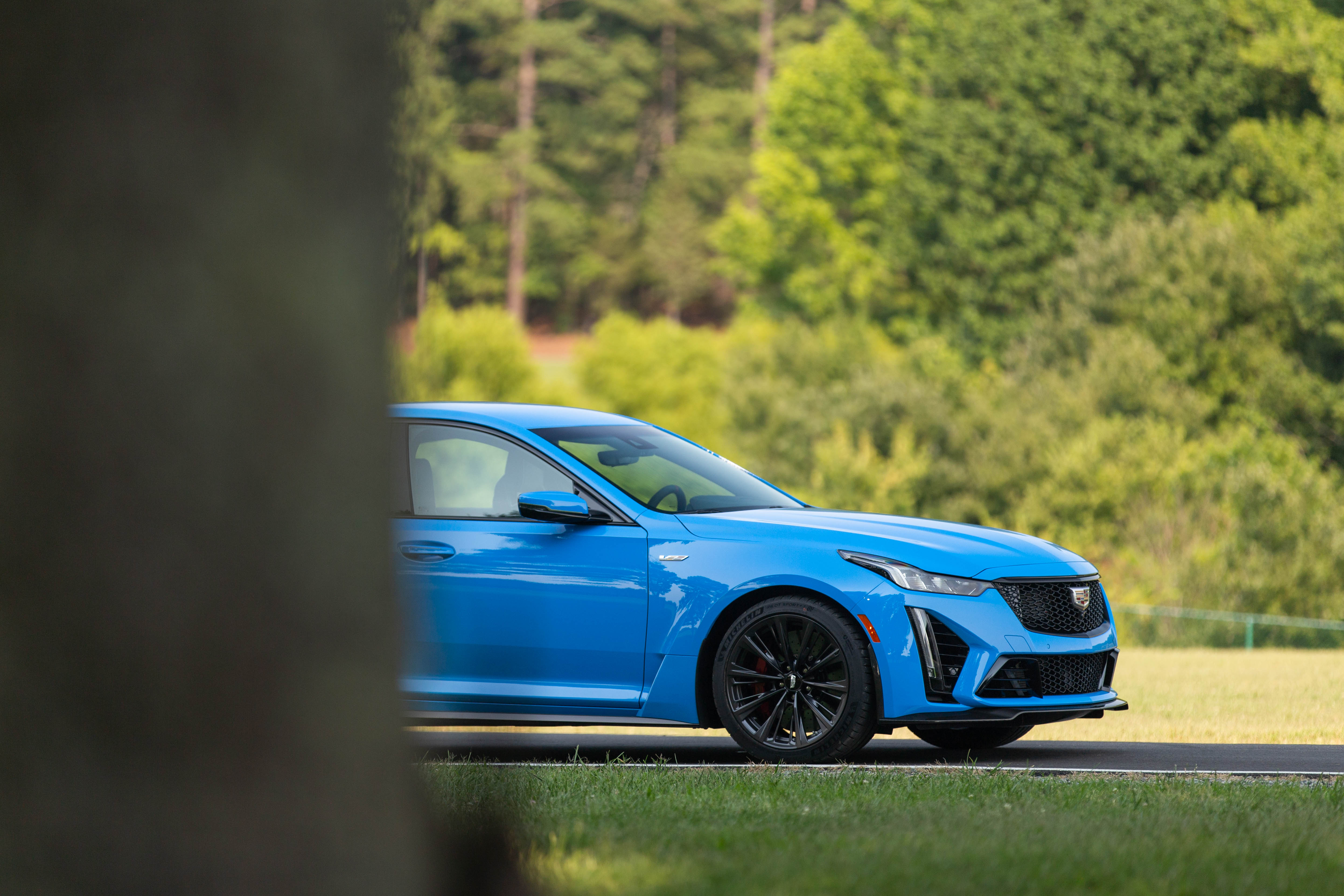 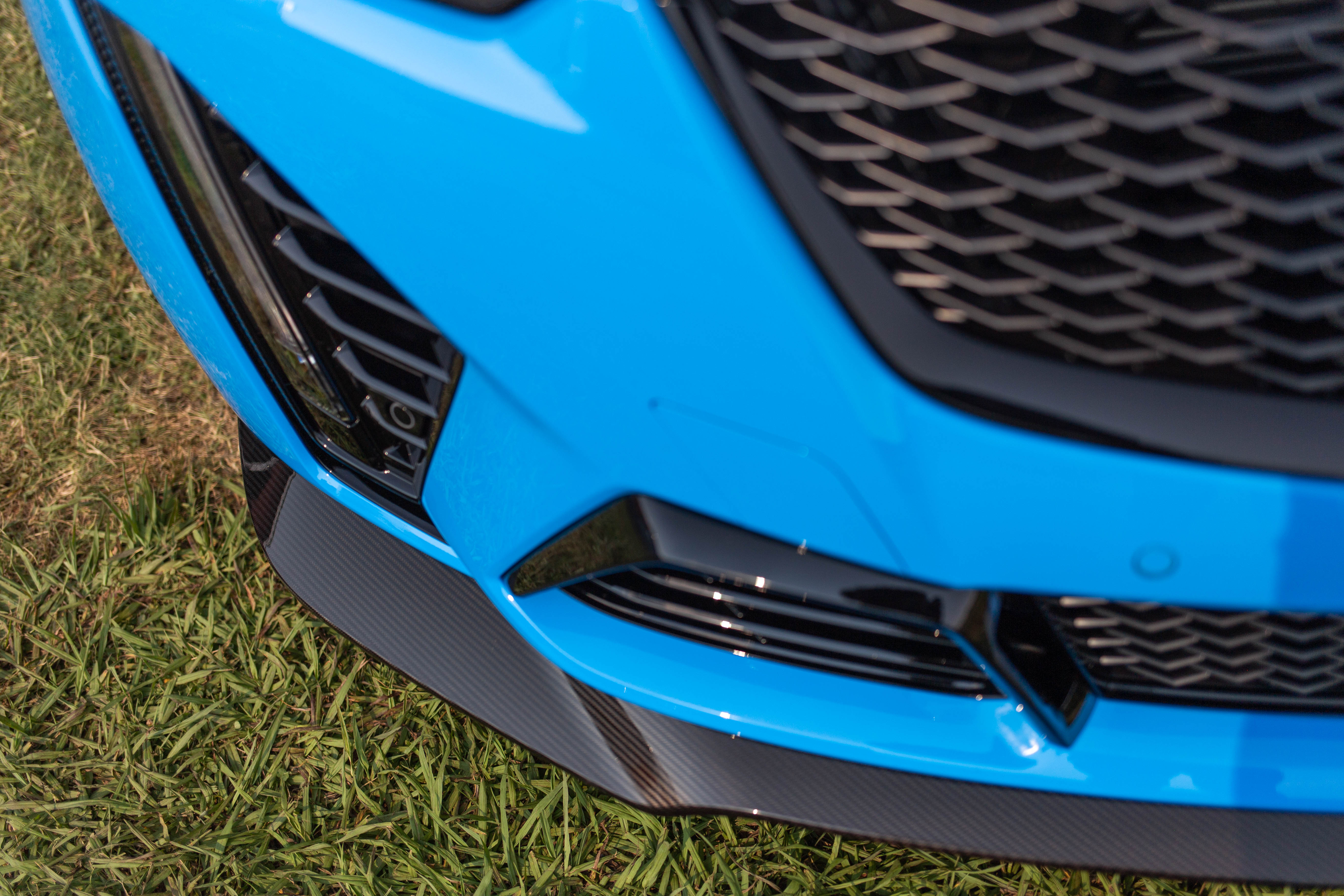 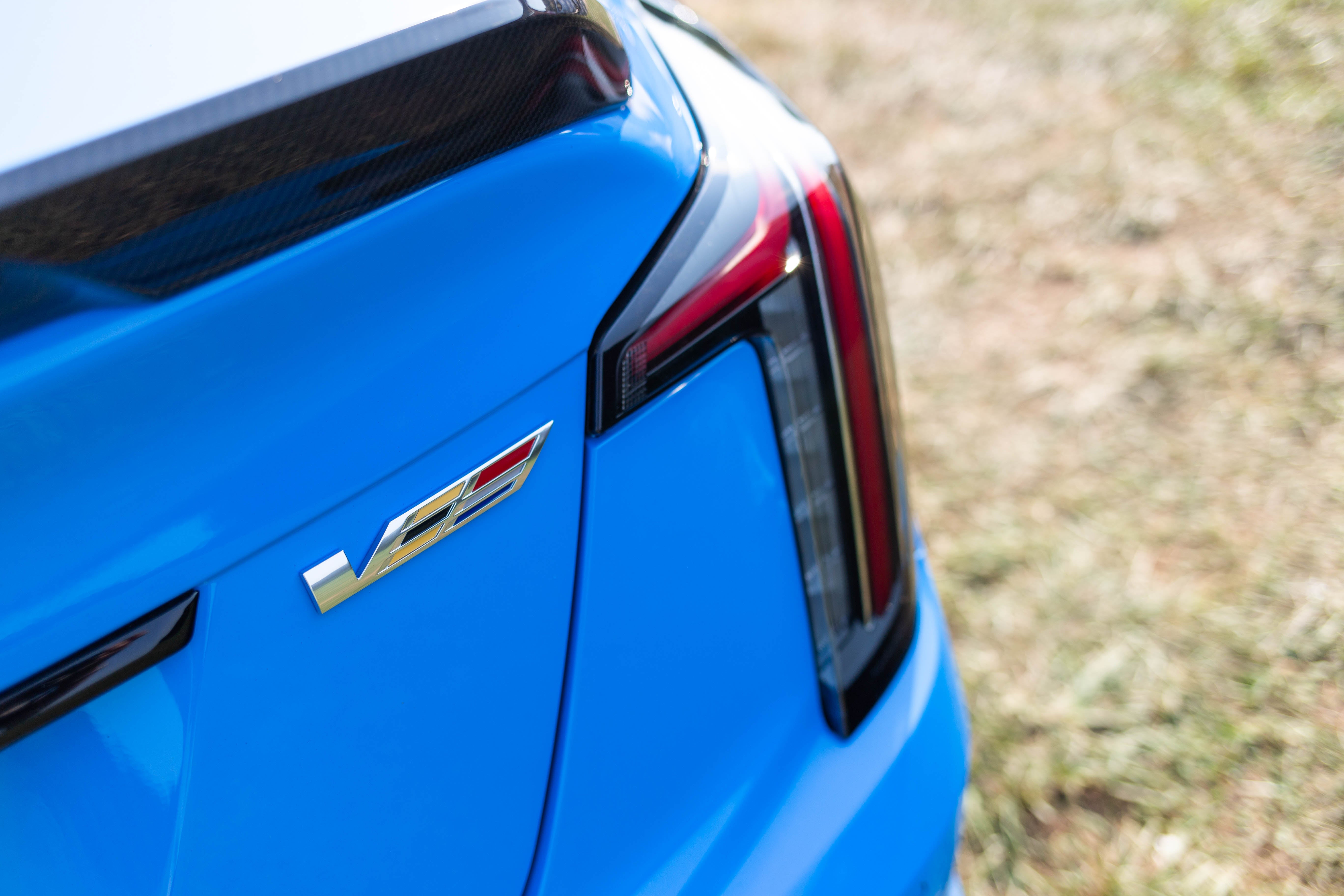 There’s no getting around how mean the CT5-V Blackwing already looks (a very good thing!) but you also have the option of two carbon fiber packages. For $5,230, the Carbon Fiber 1 Package includes a front splitter, a giant rear wing, and front-wheel deflectors. Add another $4,100 for the Carbon Fiber 2 Package—and bringing your grand total up to $9,330—and you’ll get rocker extensions, a rear valance diffuser, and a grille header.

And despite outward similarities, I think the new CT5-V Blackwing rights the most of the CTS-V’s wrongs with its interior. This is a marked step up from the outgoing car both in terms of design and quality. The screen is bigger and clearer, the amount of buttons seems to have been reduced, and it just appears far less crude overall. Felt good to the touch, too.

If you, like me, feel understandably intimidated by the Big Nasty’s stats on paper, don’t even worry about it. The thing is docile as a tranked circus bear when you want it to be. In fact, I imagine driving cross-country in one would be a very chill experience. It’s a Cadillac, after all, and in its most comfortable setting, it almost floats over the road. There’s no hiding its girth, of course, but rather than handling like a clumsy boat, it merely feels big. You just have to account for more physical car when in tight spaces. 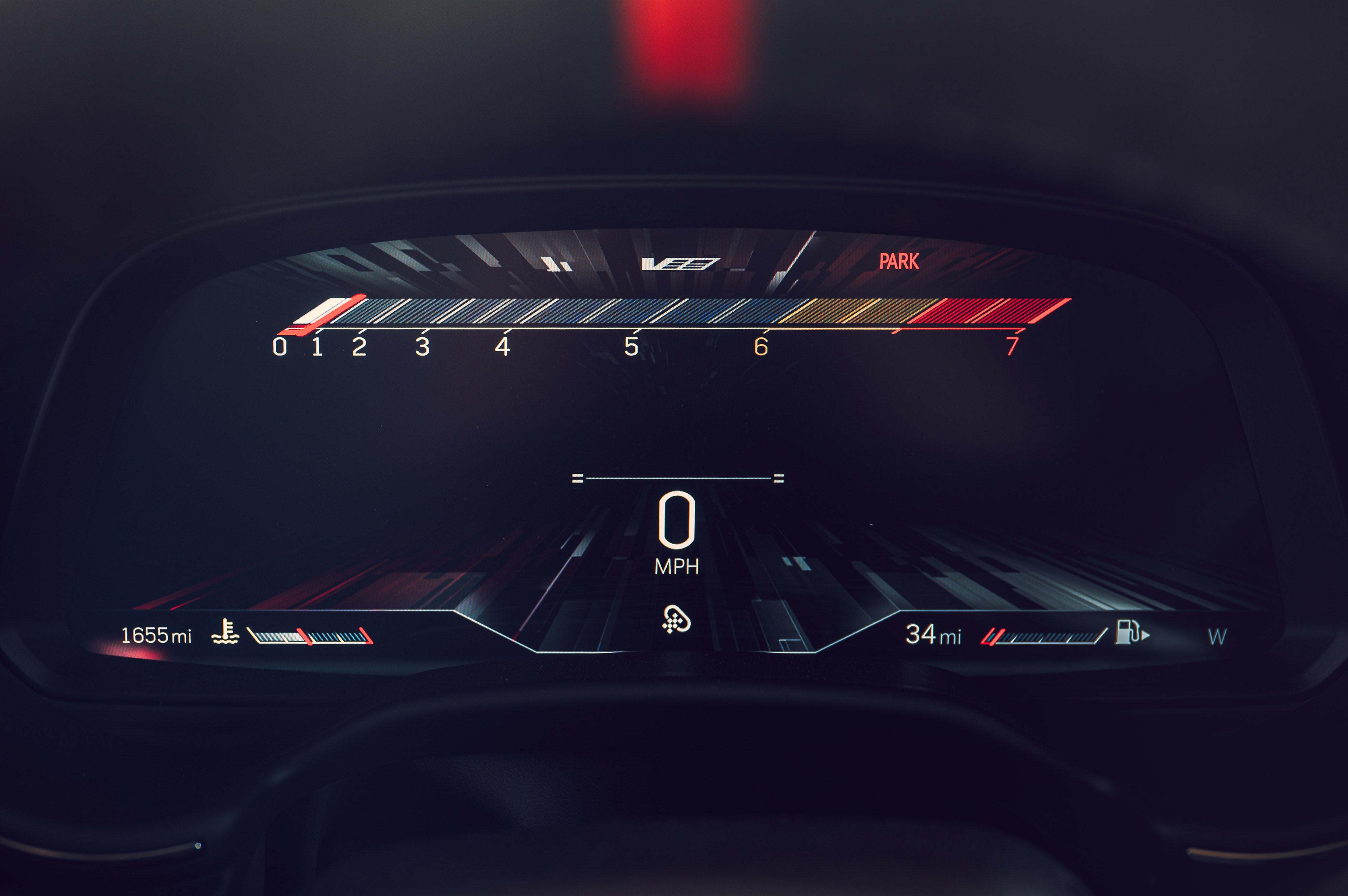 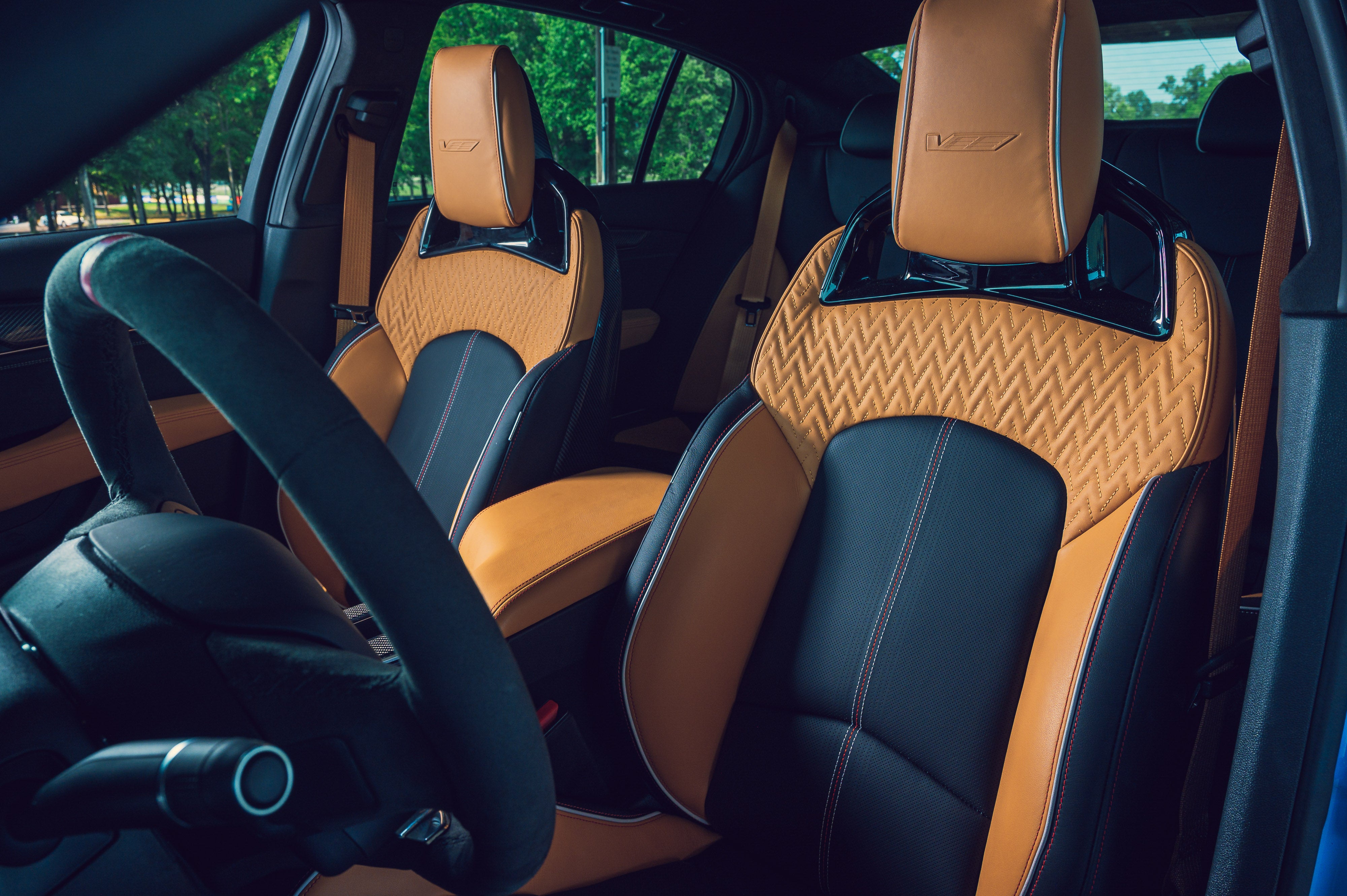 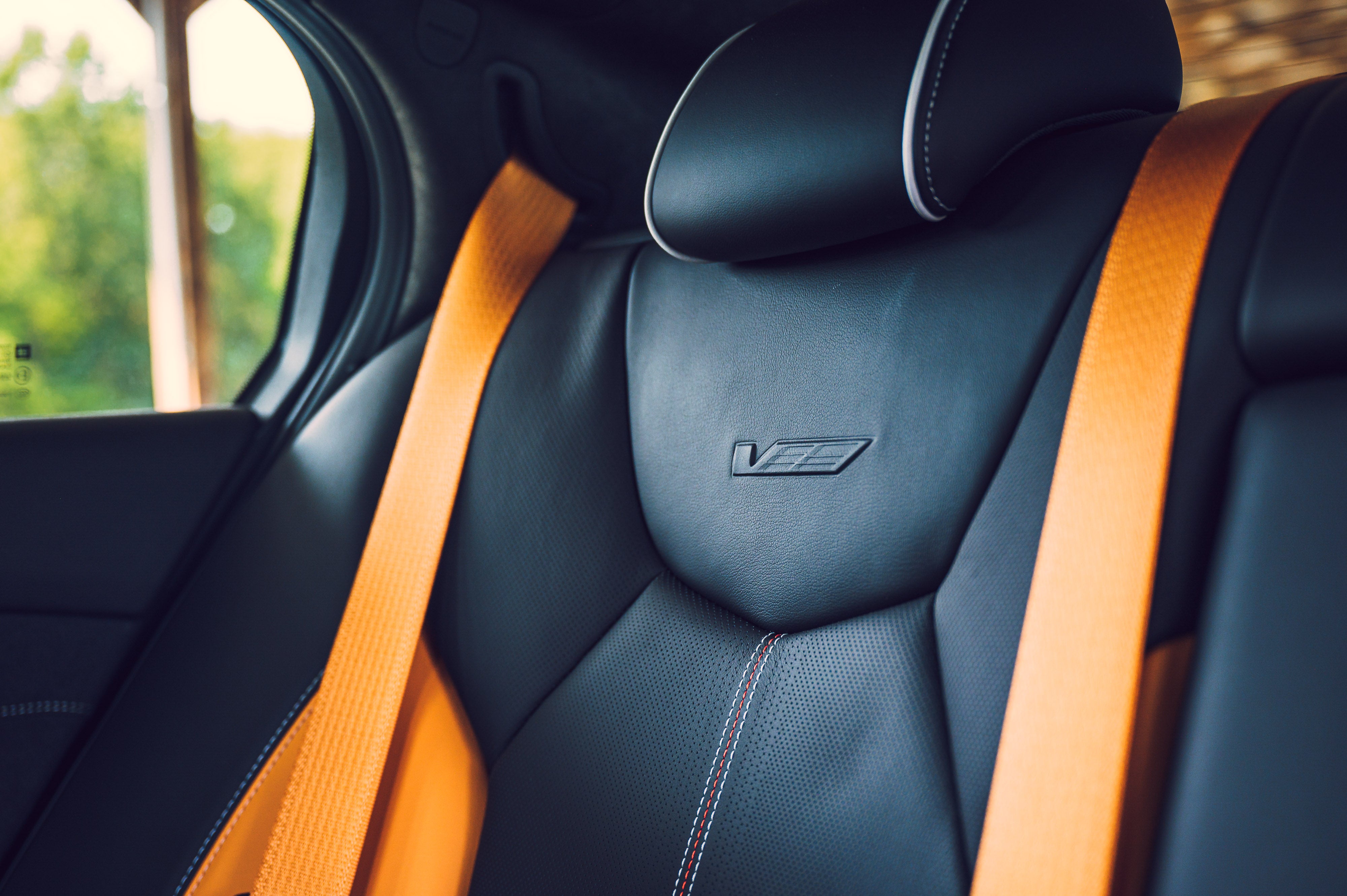 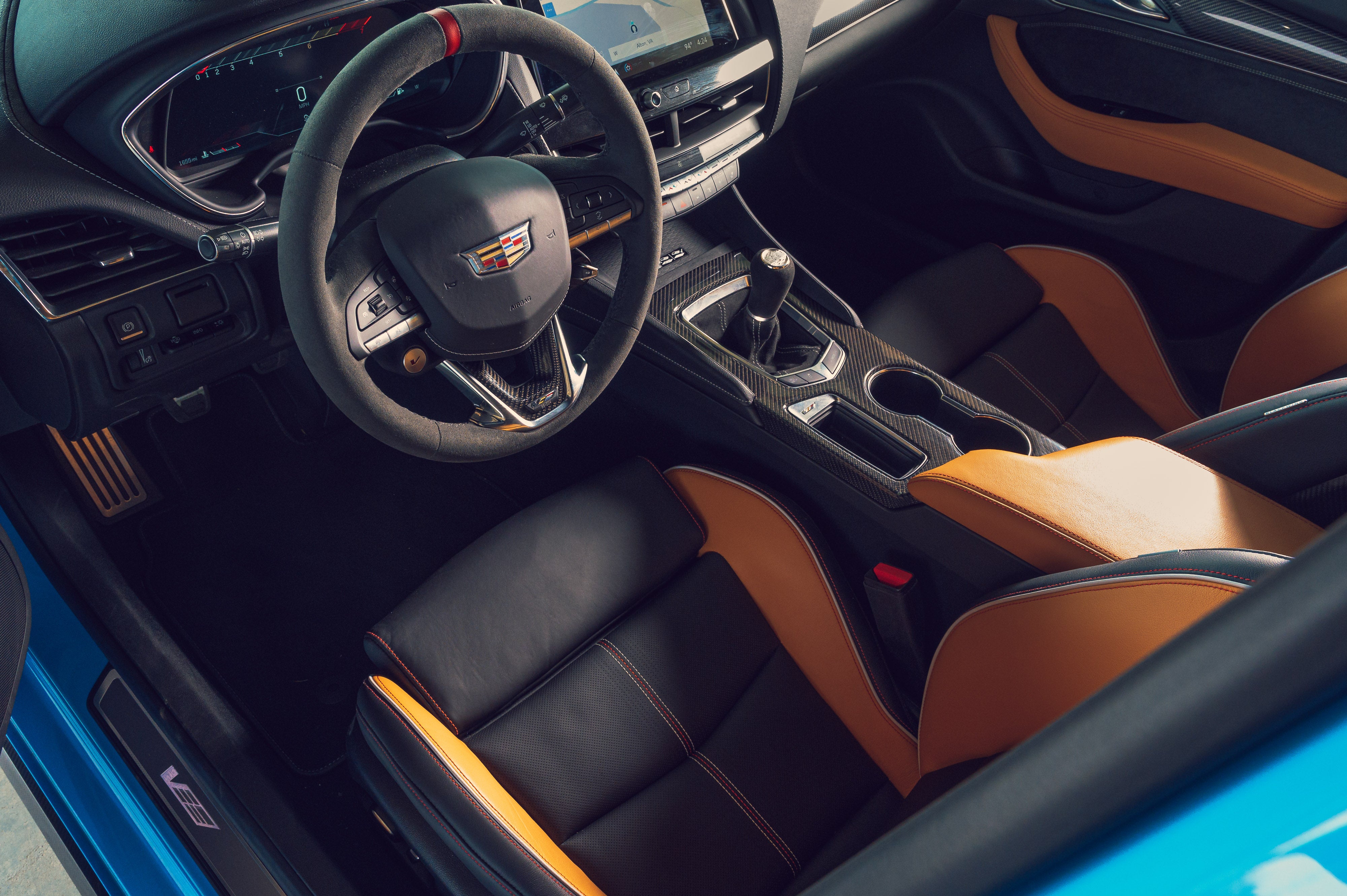 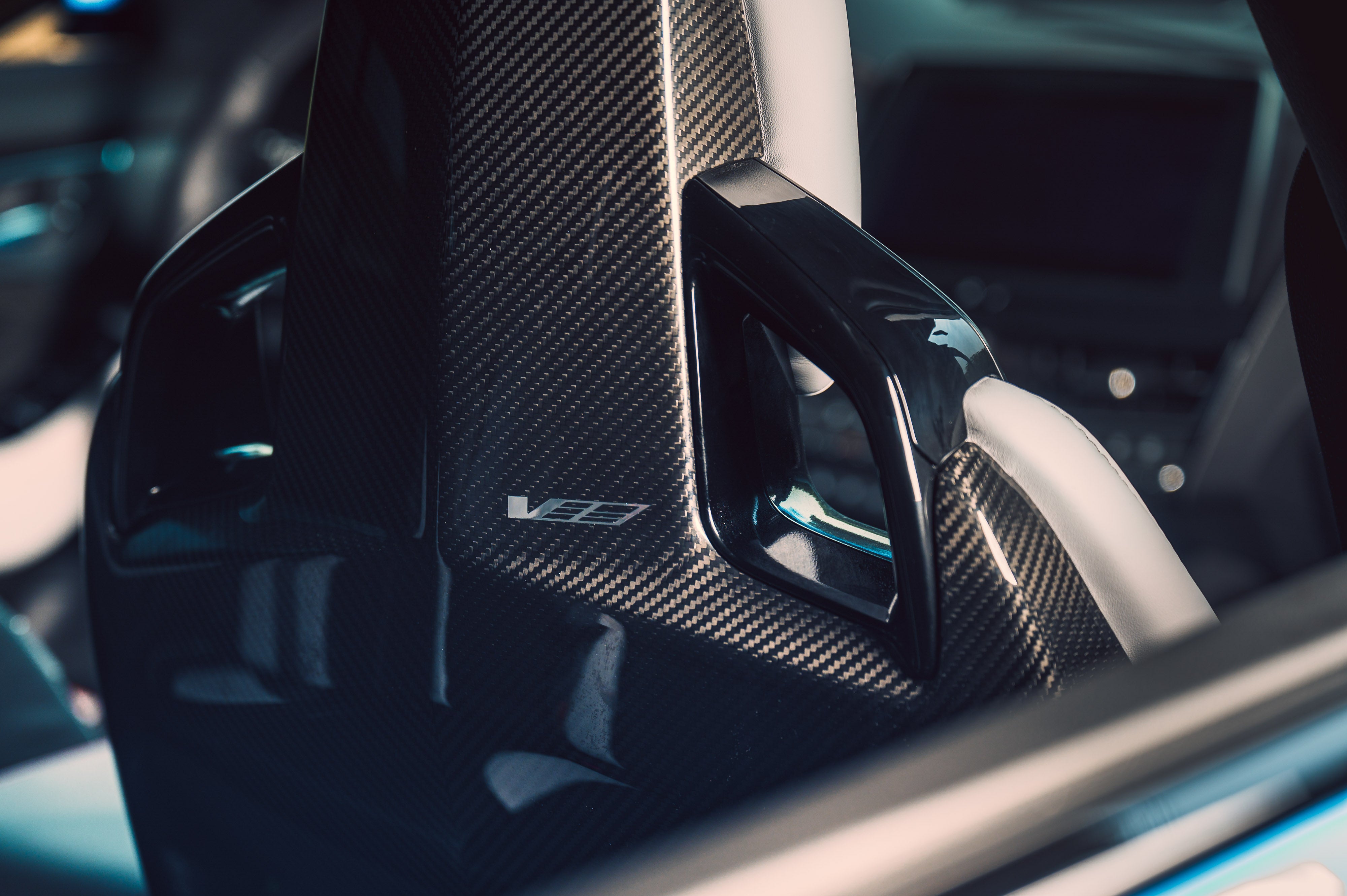 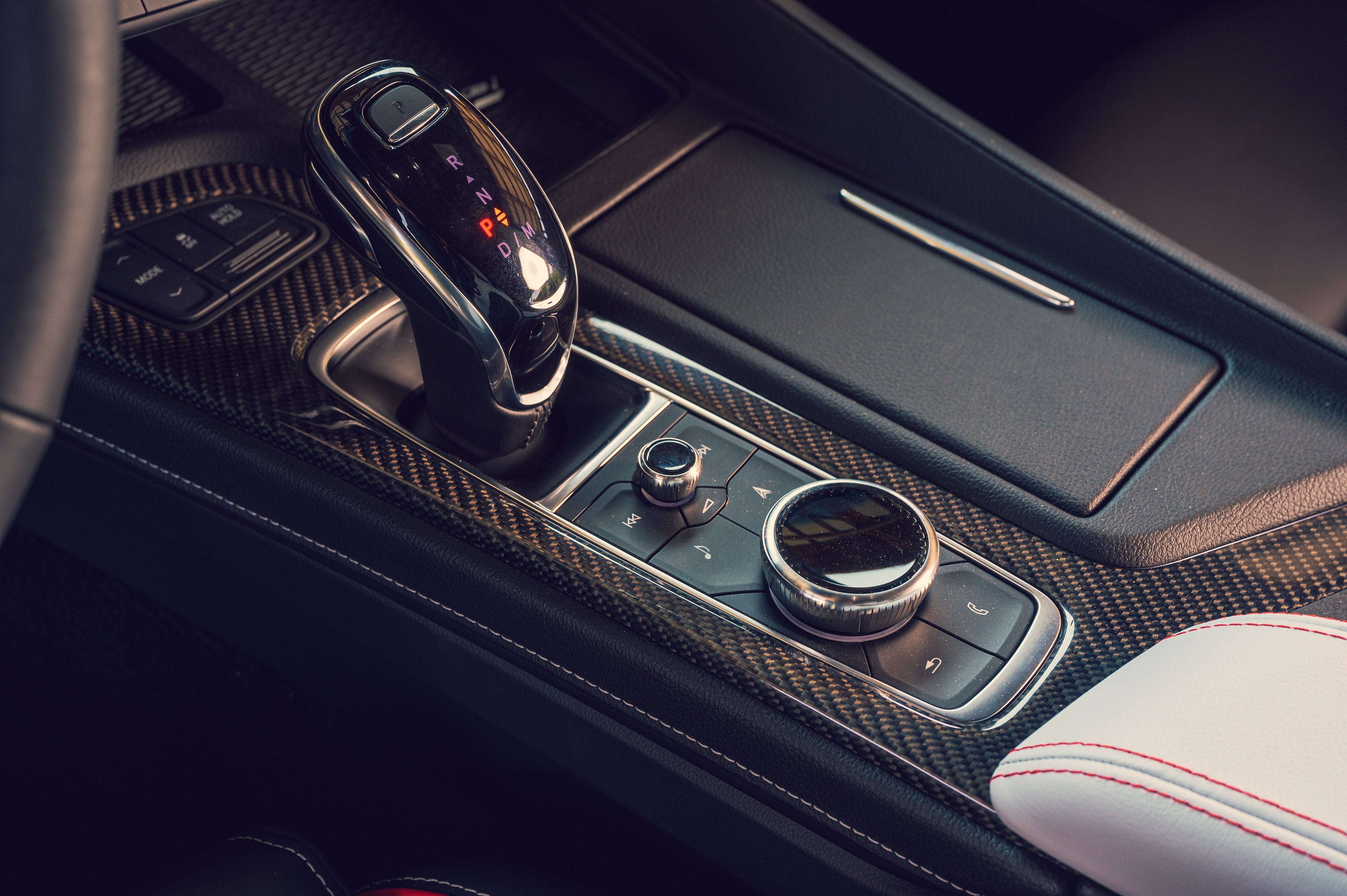 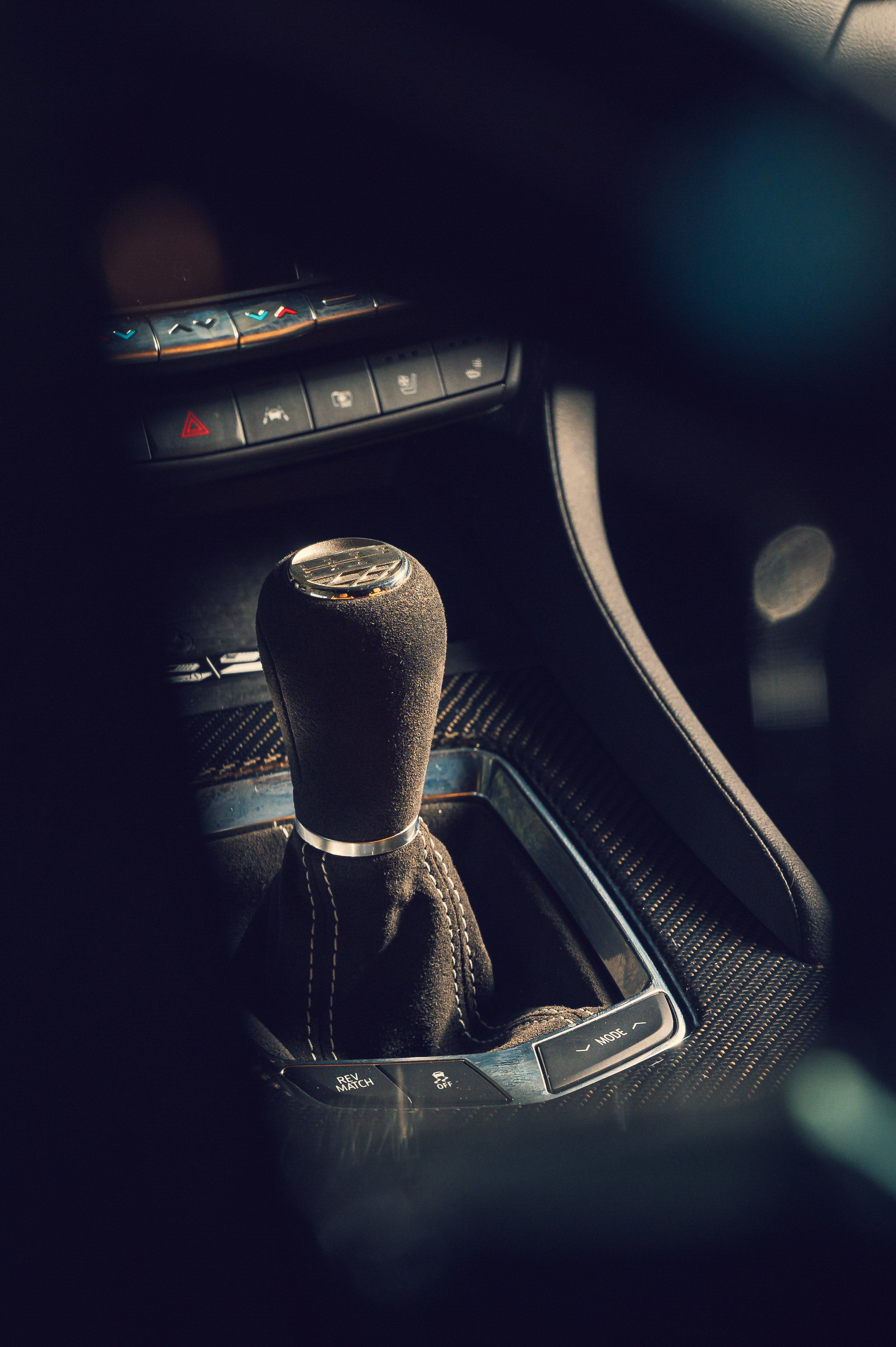 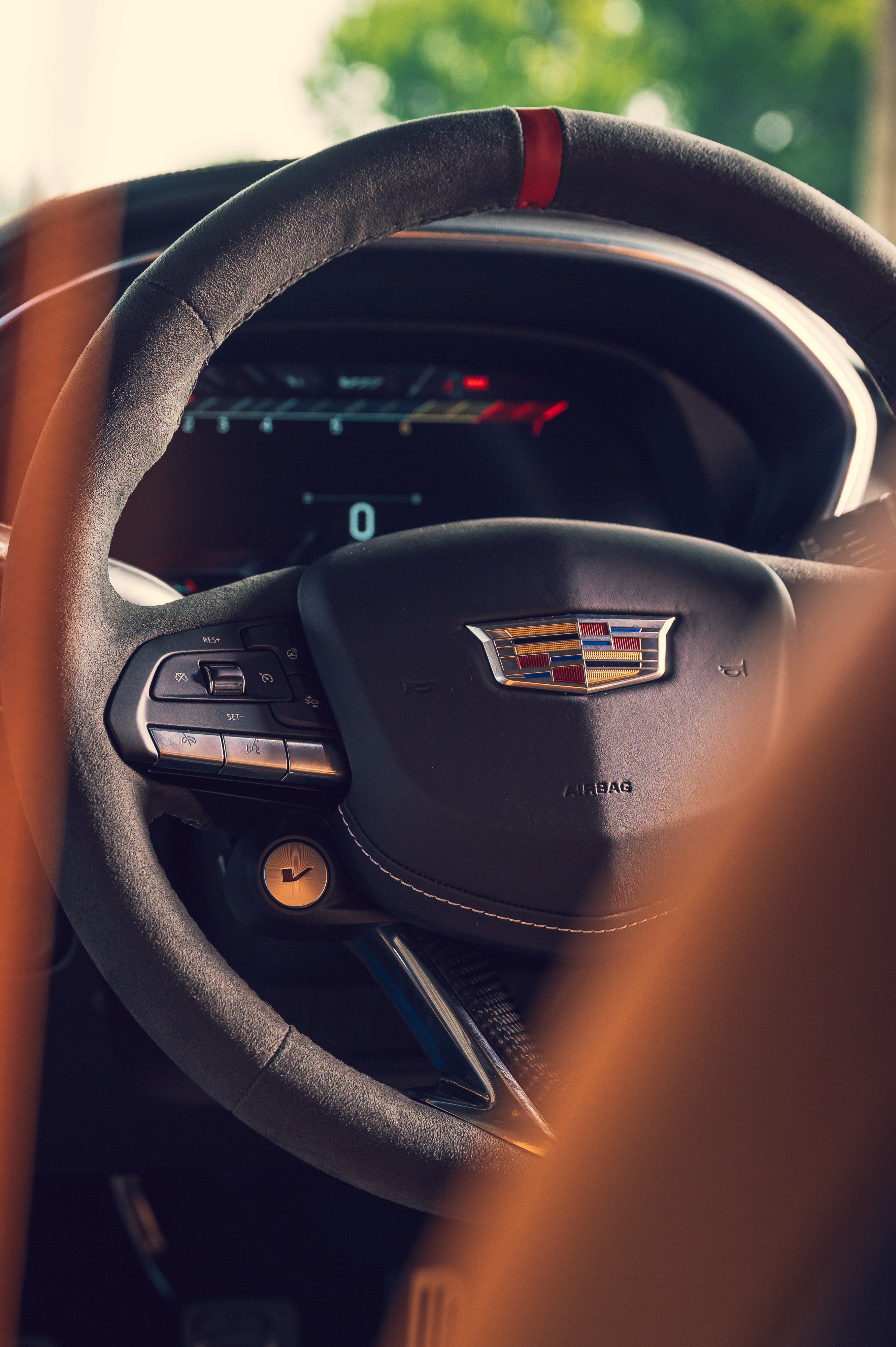 The 10-speed automatic is a delight around town, up and downshifting seamlessly without the annoying slow-down stutter you sometimes get from a dual-clutch setup. In the manual car, the clutch engages nice and low, the short-throw lever slotting easily into well-defined gates. Let off the throttle at speed in the manual and a series of burbly cracks and pops explode from the tailpipes. Leave it in the highest gear and the engine, hanging out below 2,000 rpm, cannot be heard at all.

But, oh, stomp that throttle and the bear’s meds wear off. It remembers it was always a wild, vicious animal.

A massive snarling fills the cabin and the CT5-V Blackwing leaps forward with the ferocity of a charging bull. There’s a momentary lightness in the steering from the entire car leaning back on its haunches from the acceleration—an exhilarating reminder you’re reining in something undeniably rear-driven. But fear not; there’s never a loss for grip, as the Cadillac’s onboard computers are far too responsible for that. The power is still relentless, pulling mightily all the way to its 6,600-rpm redline. At full roar, the engine sounds like someone knocking on the sky.

I spent the night before stressing about how terrifying and out-of-hand the CT5-V Blackwing would be on track: 668 hp is nothing to joke about. But once out of the pit lane, those worries melted away. There’s nothing scary about the big Cadillac (provided you don’t poke the bear too much). Immediately, it has less roll and lean than the CT4-V Blackwing. I thought the smaller car had a forgiving chassis; the CT5-V Blackwing felt positively playful. It’s larger in every way—bigger, heavier, more powerful—but still approachable. This is a car that welcomes you hanging its ass out through an entire corner. It rejoices in shenanigans.

The steering was a tad light for my taste in Sport mode, but Track mode tightened it right up. Turn-in is sharp but you never quite lose the sensation you’re piloting something immense. I liked it, though. It made the CT5-V Blackwing more predictable—a very good thing when you’re stuffing that powerful of an engine into a car anyone is allowed to buy.

And while the magnetic ride suspension worked its usual magic of keeping the car planted even over the most high-speed bumps, my best fail-safe friend was those carbon-ceramic brakes. Yes, I know they’re expensive. But if you have any plans whatsoever to track your CT5-V Blackwing, they are a must. The calipers snap down on the giant rotors like a crocodile and scrub speed harder and faster than you can believe. We ran those cars lap after lap after lap on a scorching day and not one of them displayed any sort of fade by the end of our two-hour session.

To wrap up, I rode for some hot laps with Kevin Zelenka once more in the CT5-V Blackwing pace car. It wasn’t on the freshest set of tires so the laps were greasy at times and therefore way better and more fun.

Cadillac’s reps said they set out to engineer two distinct personalities across both cars and they absolutely nailed it. Neither behave like trim and petite track-day specials; they are both clearly roadgoing cars that were trackified. But whereas the CT4-V Blackwing is the leaner and more athletic of the two, it also feels a twinge more serious.

The CT5-V Blackwing is the hoon-happy cowboy heavyweight. It’s the one for HAMMERDOWNWHAMPUNCHPOWERFUN. You’ll either nail that apex or you might drift around it. Regardless, you’ll have the dumbest grin on your face when you do.

The King Is Now an American

Admittedly, I did not spend very much time with the CT5-V Blackwing to find anything I immediately disliked. The car was a monster on track and completely civilized on the road. The ventilated seats kept me cool. The air conditioning worked well. The sound system was nice. The ride was comfortable. The updated interior was pleasant to use. 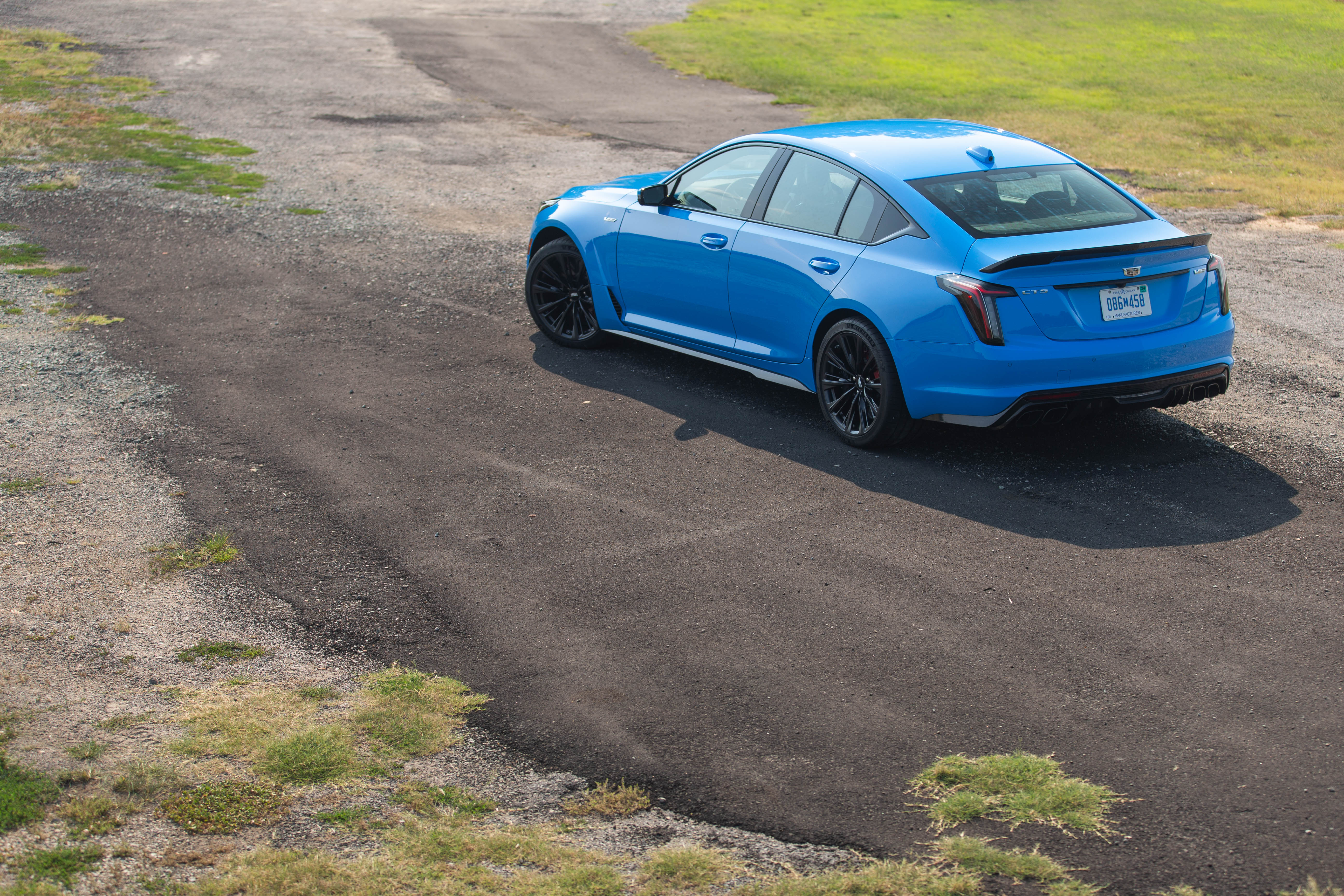 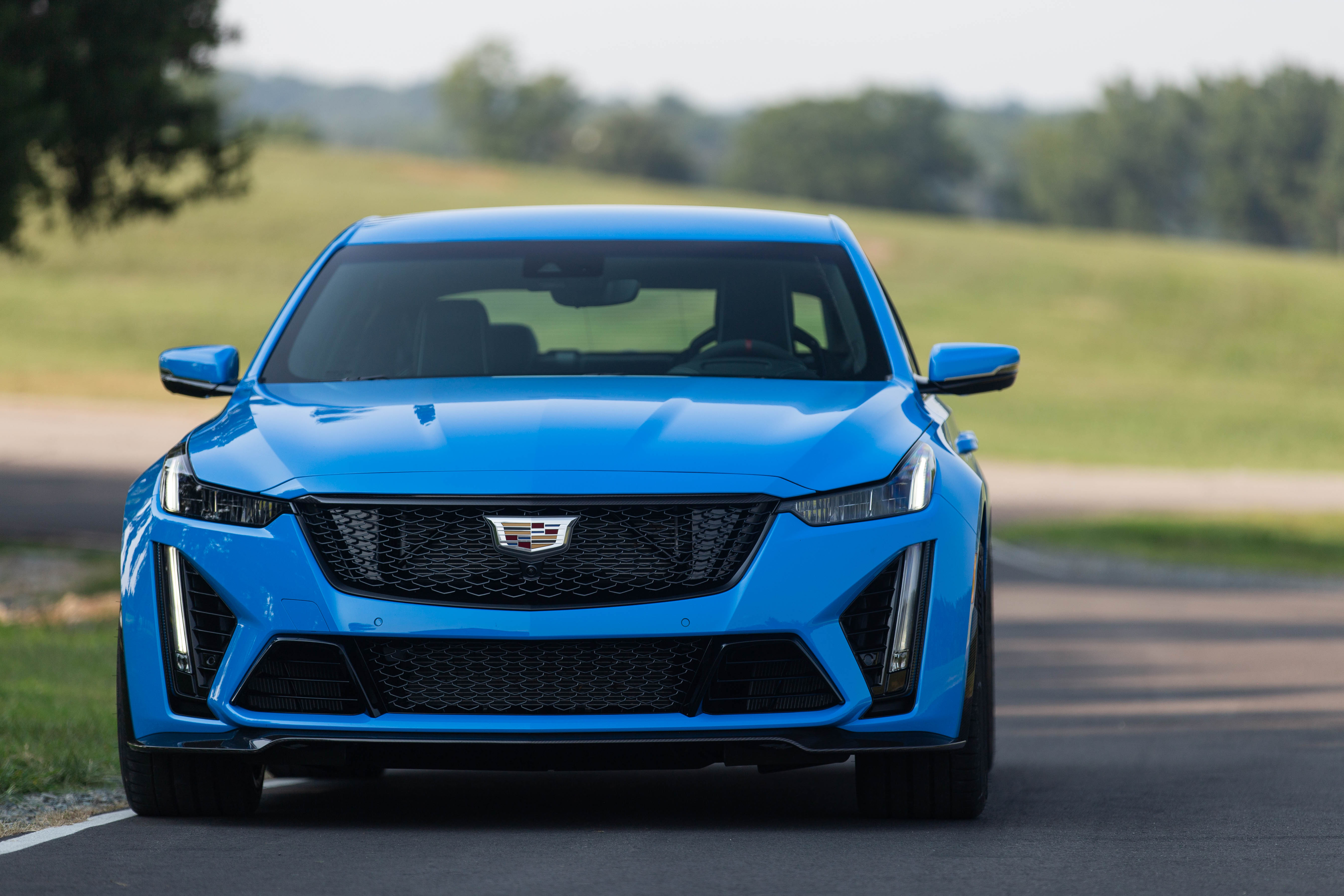 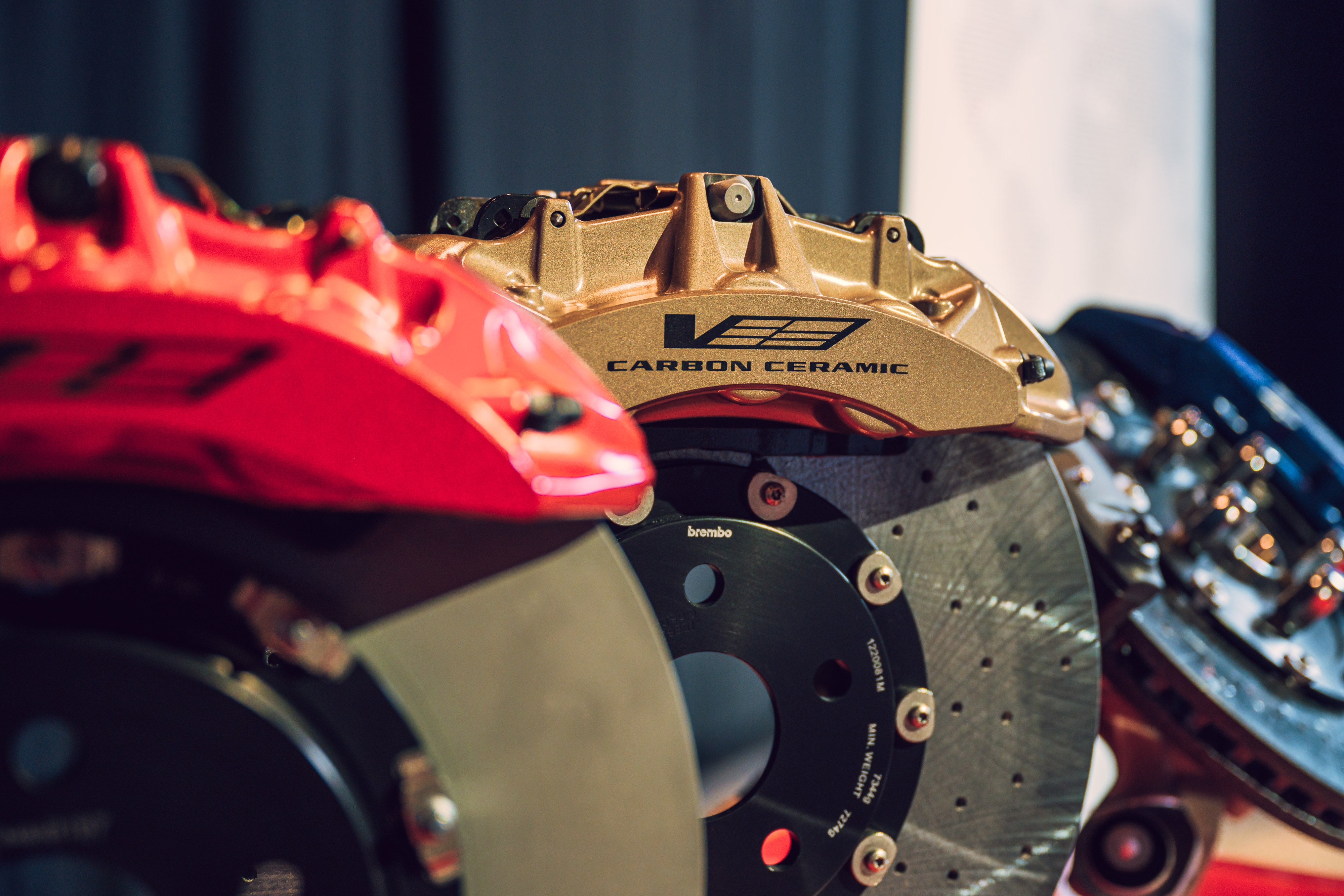 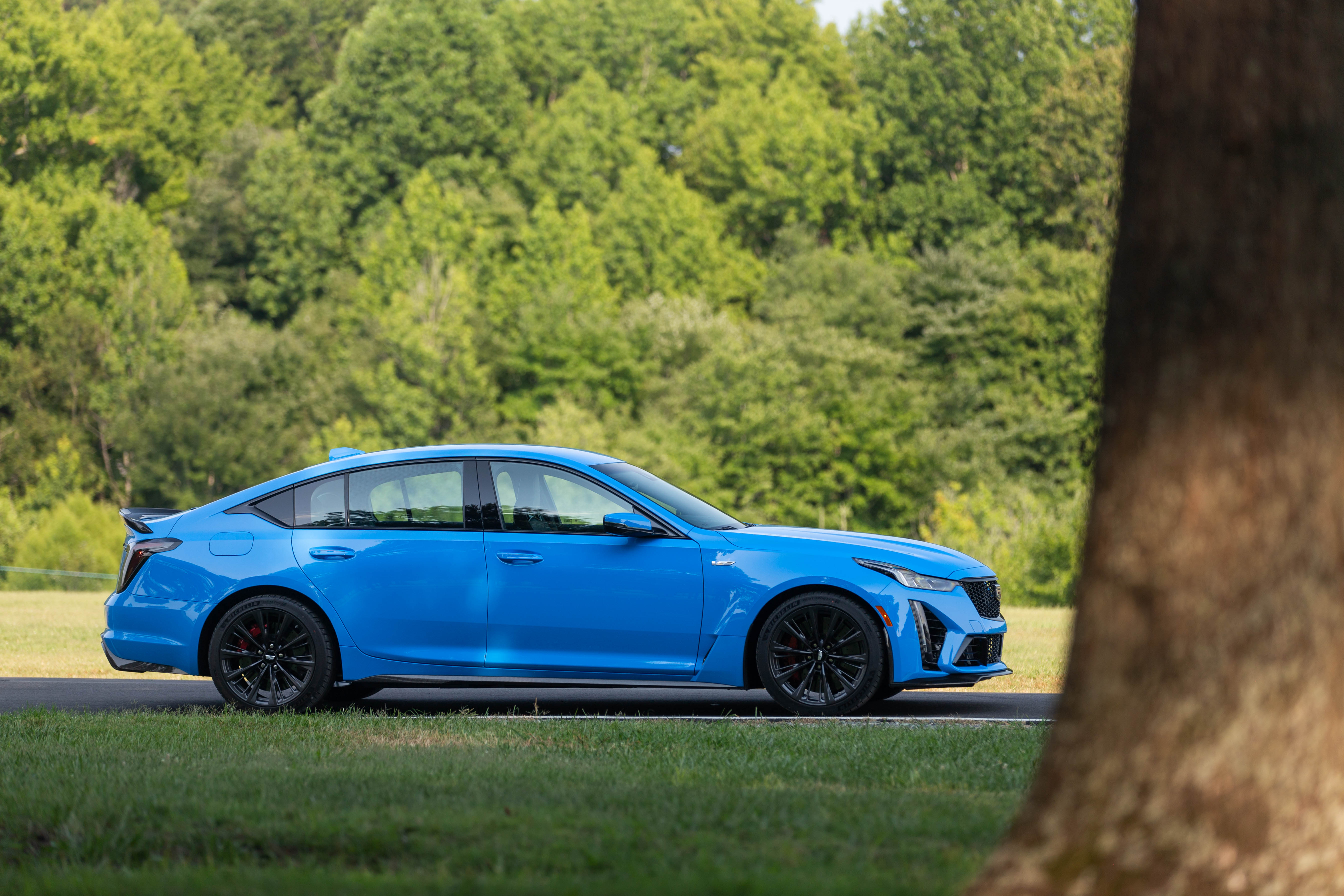 The manual tester Cadillac loaned me came optioned with carbon-ceramic brakes ($9,000), a black-and-tan leather interior ($6,090), both Carbon Fiber Packages ($9,330), and the performance data and video recorder ($1,600). The total vehicle price came out to $112,245. The automatic tester ($2,275 for the 10-speed) also came optioned with both Carbon Fiber Packages and the data recorder, as well as an infrared tintcoat ($1,225) and a parking package ($1,010) that included the rear camera mirror, air ionizer, and automatic parking assist with braking. The total price there came to $108,020.

Once again, the CT5-V Blackwing can count the various BMW M5 and Mercedes-AMG E63 flavors among its competitors. If refinement and badge snobbery are what you’re after, you’d best go home with one of the German sedans and be done with it. The BMW offers a more premium experience and hardly anyone is keeping up with Mercedes interiors right now.

The Cadillac is old school: a sedan that’s supercharged instead of turbocharged, offers a manual as standard, and treats all-wheel drive like a disgusting swearword. In 2021 it feels almost… illegal?… to combine all of those things. 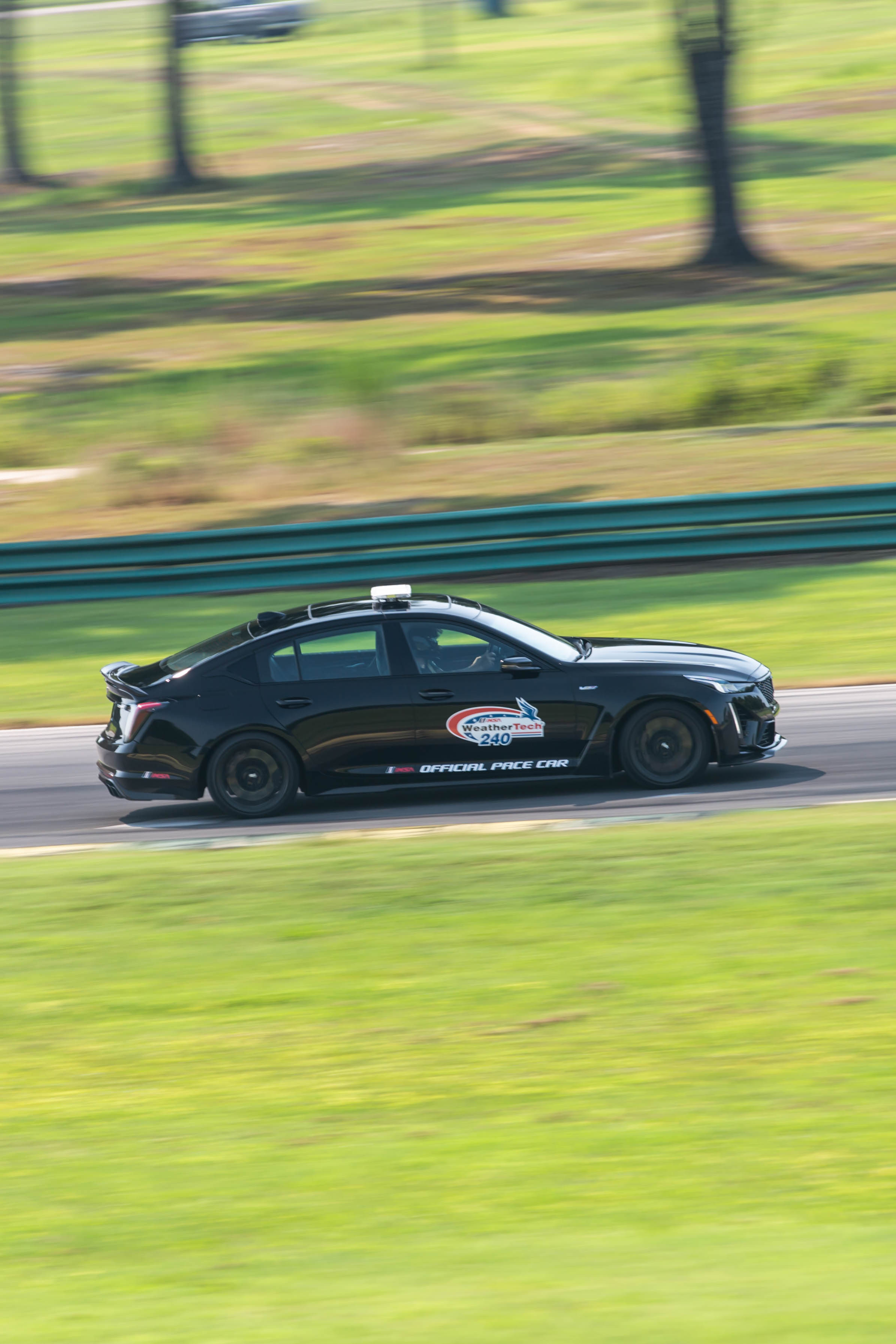 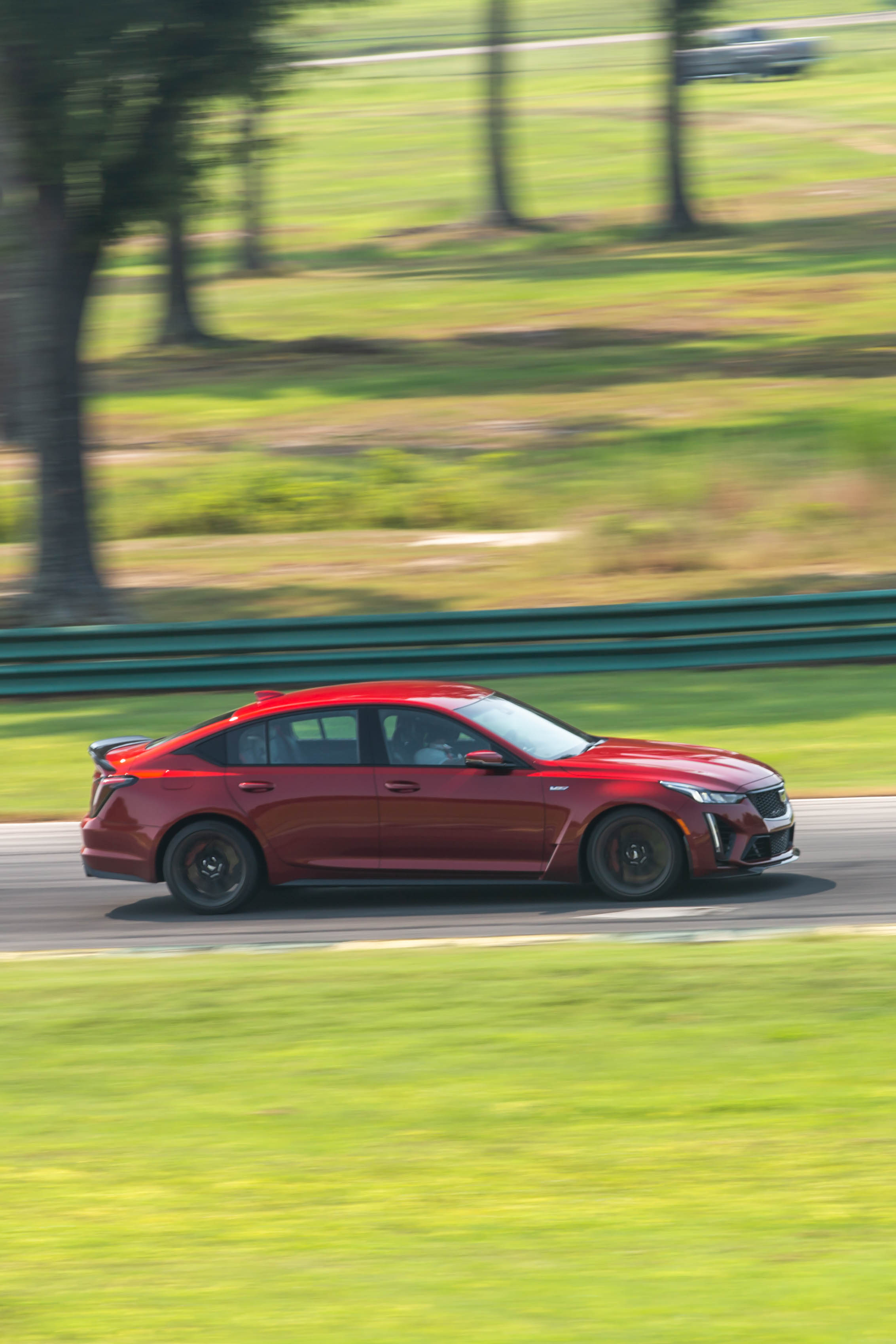 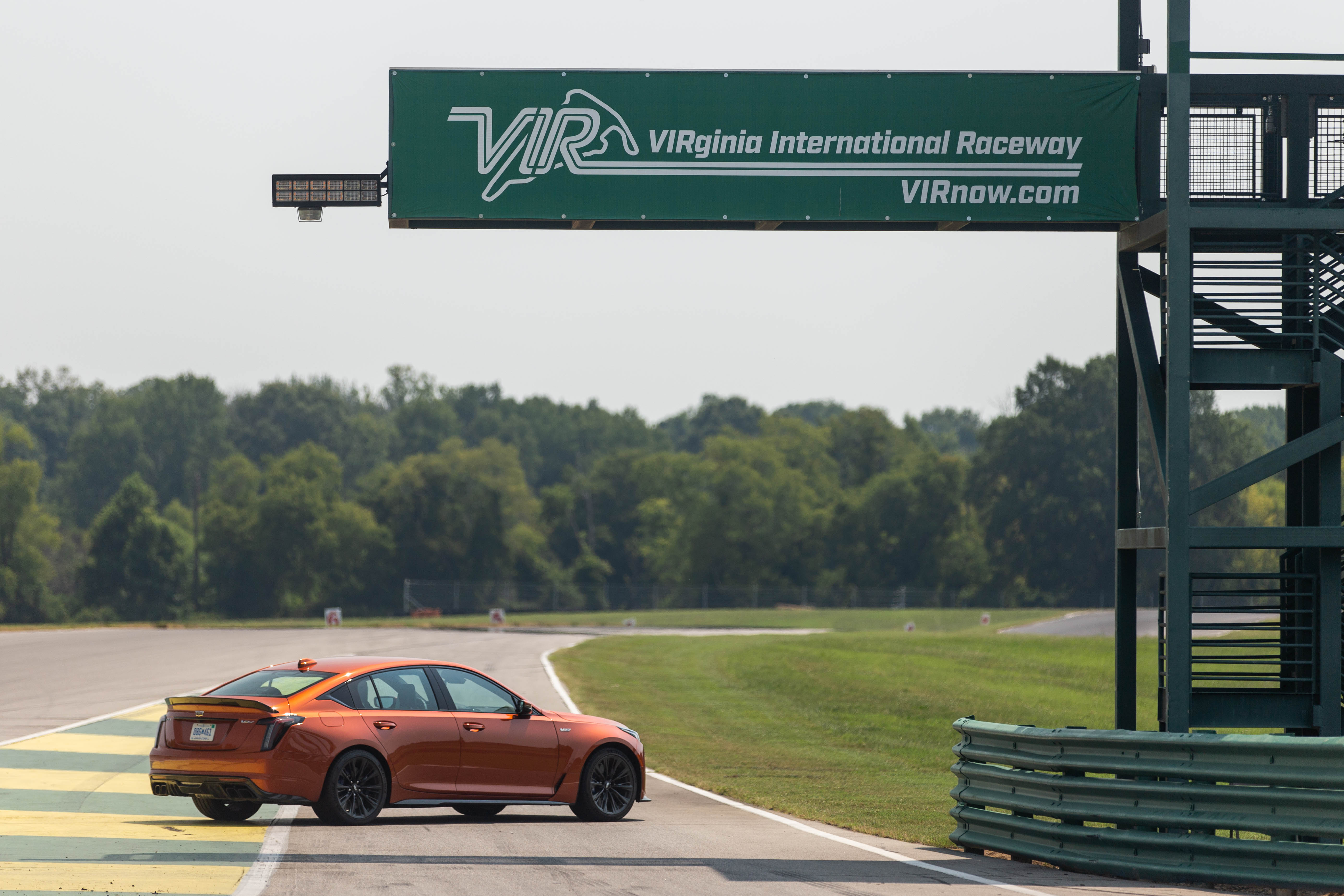 Thanks to their all-wheel-drive systems, the AMGs and Ms might be more brutal off the line. But they also start in the six figures and, frankly, the M5 hasn’t been cool since the V10. There, I said it. The F90 M5 is the most boring fast car I’ve ever driven. If I’ve got something with more than 600 hp, I’d damn well like to know it. Let me hear it, let me feel it in the pit of my stomach. Don’t wrap it up in insulation and NVH all in the name of “luxury.”

The CT5-V Blackwing couldn’t be more different. It was fun. I bonded with it more than I did with the CT4-V Blackwing, which surprised me because I usually prefer the lower-power, sportier cars. But the super sedan won me over with its sheer outrageousness and cheek. Charismatic as all hell, it is likely the last of its kind. It’s only appropriate to go out with a bang.