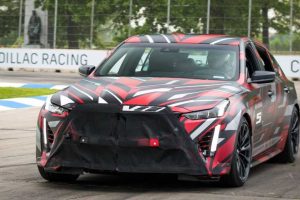 We are as eager as you are to see how Cadillac’s latest performance sedans, the 2022 CT4-V Blackwing and CT5-V Blackwing, stack up against the sport-sedan competition. We’ll know a lot more come February 1 at 7 p.m. ET (4 p.m. PT), which is when Cadillac will pull the wraps off both via a livestream that you can watch at Cadillac.com, the Cadillac Twitter page, or Cadillac’s media site.

Need a quick refresher on what, exactly, the Blackwings are? You might remember a V-8 that carried that name, but that’s not what these two will be packing. It’s a bit confusing, but think of Blackwing more as an indicator of ultimate performance rather than a specific powertrain. While the twin-turbo Blackwing V-8 won’t be used here—it’s only seen duty in the CT6 thus far—the CT5-V Blackwing should pack a different supercharged V-8, and you can expect the CT4-V Blackwing to get a twin-turbo V-6.

We have yet to see the cars without the camouflage shown here, so they’re still keeping any stylistic detailing a secret. One thing that isn’t a secret, though, is Cadillac’s confirmation that both cars will offer a manual transmission, bucking a long and depressing trend of automatic-transmission atrophy. All will be revealed in less than a month, so stay tuned.