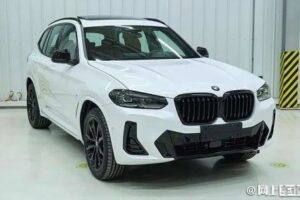 The 2022 BMW X3 facelift images have been leaked ahead of unveil, revealing the updates and changes on the SUV.

The BMW X3 facelift SUV has been revealed via leaked images, just a month ahead of its official unveil. The images showcase all the updates and revisions made to the exterior of the SUV.

As seen from the spy images, the 2022 BMW X3 will come with an updated front fascia, featuring a revised ‘kidney grille’ which are now joined together at the centre. The upcoming X3 facelift also features an updated set of LED headlamps, while the front bumper design has also been revised.

The sides of the SUV now feature a newly designed set of alloy wheels, while the rear comes with an updated bumper with dual exhaust tips at either end. The three-dimensional LED tail lights have been retained from the outgoing model, but now features a dark tint which matches the gloss-black elements seen all around the SUV.

The leaked images do not reveal the interiors of the upcoming BMW X3 facelift. However, the SUV is expected to feature a number of subtle updates, along with plenty of new equipment.

The technical specifications of the 2022 BMW X3 will be announced during the SUV’s unveil next month. Once introduced, the new X3 will continue to take on the likes of the Mercedes-Benz GLC and the Audi Q5.