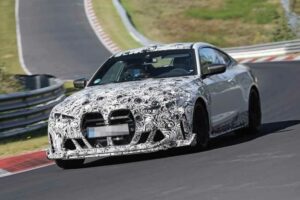 ‘Beauty belongs on the catwalk’, is the opening salvo of BMW’s press release concerning its appearance at this year’s Concorso d’Eleganza Villa d’Este. For much of its turnout – naturally the firm will continue its celebration of 50 years of M GmbH at the event – there will be ample evidence of its devotion to good looks. Whether or not the statement applies to the new M4 CSL, the ultimate version of the not-universally-adored G82, remains to be seen.

Either way, the release confirms that yes, the leaner, meaner version of the M4 we’ve seen pounding around the Nurburgring exists, and yes, it is absolutely going to be badged as a Coupe Sport Leichtbau. Which, of course, means it reactivates a nameplate that has lain dormant since it was applied to a hallowed version (the recipient of PH’s all-time best BMW M car award, no less) of the already cherished E46.

Obviously this levers a prodigious amount of expectation onto the model’s shoulder parts. BMW M has not stopped producing lighter, faster versions of its definitive model in the intervening years, but it has typically shied away from using the CSL badge to market them – even when they far exceeded the blueprint established by the E46. Now that it is set to change with what is almost certainly going to be a limited-edition variant of the already spectacularly fast G82.

Quite what format its alterations will take is still not known, although it’s no great leap to suggest that both mass and aerodynamic efficiency will have been seen to, alongside what’s likely to be a significant chassis overhaul. Whether or not BMW has opted to deliver more power is still open to question (although we’re going to say it almost definitely has if only to justify a significant premium). Regardless, we now know for sure that all the speculation has an end point. Concorso d’Eleganza Villa d’Este is due to kick off May 20th.