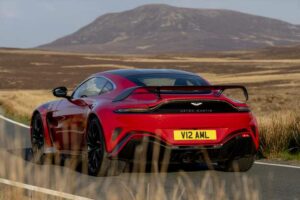 The first turbocharged V12 Vantage will also be the last

Aston Martin hasn’t managed the feat of launching the last new car in the world to be powered by a 12-cylinder engine, at least not yet. But the Vantage V12 feels like it is getting to the pub just ahead of the landlord calling time. In an automotive world where everything will soon be at least partially electric, and an ever-increasing percentage of performance cars will be full EV, a fresh model that takes such a route one journey to speed feels thrillingly old fashioned. This is the classic combination of a small car, a big engine and a minimum of dynamic distractions – rear-wheel drive with a conventional limited slip differential in place of the active one in the regular V8 Vantage.

The V12 Vantage is also very expensive. Aston was hardly giving away the last-generation car during its two separate runs, but the new one’s circa-£270,000 price tag (there is no exact official figure) makes it pretty much twice as expensive as the V12 Vantage S was in 2014. That price is underwritten by the exclusivity of the limited production run, with just 333 Vantage V12s being built for all markets. But it is also based on Aston’s realistic assessment that people are going to really want this car – one borne out by the fact the entire run had sold out pretty much as soon as the car’s existence had been confirmed.

Making its acquaintance in the paddock at Anglesey, the V12 categorically looks the business. The basic Vantage shape is clearly recognisable, but it has been turned up to 11: the design mission aggression rather than discretion. The V12 has a huge radiator grille, this 25 percent bigger than the V8’s and integrating with extensions to the front bumper and bonnet necessary to accommodate the new engine. Further back it gets an obviously widened track and very serious looking aero elements to channel air from behind the front arches, these filled by new 21-inch wheels. At the rear is a huge wing and a vast diffuser which takes up so much room the exhaust pipes are now mounted centrally. The Vantage F1 Edition is hardly a shy and retiring type, but the V12 makes it look about as aggressive as an S-Line.

Once in the familiar cockpit, which has changed far less, I’m expecting the V12 to fire up with an equal degree of savagery – but it doesn’t. Instead it pretty much purrs into life when the start button is pressed, without the neighbour-baiting snarl of the V8 or the crisp bark of the old naturally aspirated V12. The 5.2-litre twin-turbo engine sounds big and muscular, with gentle throttle pedal creating a nice amount of burble. But the car’s subdued aural character is an ongoing theme throughout the day.

Well before reaching the A55 for a gentle schlep back to the mainland it’s clear that the V12’s chassis is taking an equally speak-softly approach. As with the V8-powered Vantage there are separate switchable dynamic modes for chassis and powertrain, these still toggled by switches on the steering wheel. While the standard car has GT, Sport and Sport Plus the V12’s modes are Sport, Sport Plus and Track. Despite this the lesser settings actually seem softer than I recall the V8 Coupe being, although the new model sits on stiffer springs front and rear. The steering feels immediately good, even under low intensity use it has a crispness and precision reminiscent of the DBX 707’s revised front end.

Refinement isn’t great, though. There are two reasons for this, the first being that – behind the spruced-up exterior – the press car has previously been used for development work and has picked up a differential whine along the way; one that production versions won’t have. The second issue is one I’ve noticed in some other carbon-roofed cars, a tendency to trap certain frequencies of noise in the cabin and create a low background drone. The optional carbon bucket seats are also starting to bite well before reaching Betwys-y-Coed; anyone who prefers gentler support should probably stick with the standard sports seats.

But these are minor grumbles, soon forgotten once onto north Wales slightly less famous three-sided driving route – what I think of as the Ffestiniog Triangle. The V12 is monstrously fast, yet also capable of delivering speed without any undue sense of drama. The engine makes less torque than it does in the DBS Superleggera – the 555lb ft peak is 108lb ft lower – but it is still able to project the car down the road without effort. Left in Drive the autobox will short shift even with reasonably keen accelerate inputs, but this doesn’t seem to diminish the rate at which the car gathers pace. Taking control of the gearbox with the paddles and working the engine harder gives the chance to experience more of the still-muted soundtrack, but doesn’t significantly improve performance. This is one of those cars where full throttle on road will be a rare event.

The ride stays pliant as loadings increase. There is a very slight hint of float in the suspension’s Sport mode over big bumps, but Sport Plus lashes everything down without introducing any sense of harshness, and even an exploratory go in Track proves it isn’t too unforgiving for non-track use.

Increasing chassis loads reveal another difference from the regular Vantage, the switch to a conventional limited slip differential having removed the edgy verge-of-oversteer feel of the V8 car and its torque-juggling active diff. So while the steering delivers plenty of front-end bite it feels as if it takes slightly more effort to get the V12 turned and settled in faster corners – although once on the power there is huge grip from the rear Pilot Sport 4S tyres. One other grumble from road use is a literal one: the test V12’s standard carbon brakes sometimes making vocal complaint about gentle stops. Bigger ones occur silently.

The argument about where Grand Tourer ends and sports car begins is both endless and unwinnable, but – by the time I’m heading back towards Anglesey – the Vantage V12 definitely feels more like a GT. Which is a very Aston trait, of course – but seems slightly at odds with the huge wing (which wipes out a fair percentage of rear visibility) and the graunchy carbon-ceramics.

While no chance to drive the track at Anglesey should ever be turned down, especially a solo session in bright sunshine, by the time I’ve finished my first stint I’m glad to have experienced the V12 on road first. The real world is definitely its happier place. While hugely fast, the Vantage certainly isn’t a natural track weapon.

As on road, speed is effortlessly engendered, shortening Anglesey’s not-especially long straights as well as anything else I’ve driven there in the past. Grip is keen and the carbon brakes seem entirely happy to deal with the huge thermal loadings. There is no difficulty in linking it all up into a fast lap; any V12 buyers who do choose to take their cars to a track day are likely to be at the sharp end in terms of pace.

But Anglesey’s tighter corners highlight the challenge in persuading the V12’s chunky mass to change direction – it is 1,795kg in its lightest form on Aston’s numbers. I soon learn to bring speed down to something close to a corner’s minimum velocity before sending the front end in search of an apex; this absolutely isn’t a car that tolerates aggressive trail braking. The traction control is also obviously working hard on the way out of bends as it tries to keep the torquenami under control, seemingly regardless of which mode the powertrain is in.

Choosing the DSC system’s more permissive Sport mode slackens initial intervention, and certainly increases the excitement level, but also confirms the extent to which the traction management has been toiling away. It’s suddenly very easy to provoke oversteer, even in the faster corners where driver-flattering half-off modes tend to subtly increase intervention to prevent excessive drama. It felt like there was a bit too much gap between the modes – too much intervention or too little. On what was an empty, dry track I actually preferred to drive with the DSC fully off than to trust Sport – this removing the uncertainty over when the system would intervene and putting the onus on not spinning entirely on me.

Track use also made the gearshift feel obviously slower than a twin-clutcher, with the relatively tight stacking of the eight ratios offering plenty of chances to experience this. But, as on road, there is so much grunt that short-shifting has little effect on overall pace.

Even on a circuit the engine feels a little muted. Wearing a helmet, and experiencing the frequent adrenaline highs of a rapid lap, I noticed this much less; the exhaust is more than vocal enough to give a good impression of where in the rev-range the V12 is. But standing in the pitlane and listening as somebody else drove a stint proved there is definitely something missing when compared to the sublime noises of some earlier Aston V12s; there’s plenty of top-end zing, but not quite enough bass heavy ‘braaap’ beneath this. I’d like a little more sound and fury, but Aston has to make a car that satisfies increasingly stringent noise standards – and there is little doubt the aftermarket will be able to improve the experience for any owners who feel a similar lack.

The Vantage V12 is a hugely likeable car, but also a slightly confused one. The aggression of the design seems to be promising a different driving experience to the mature reality of the pliant chassis on road. The vast rear wing might be a vital part of the package that delivers up to 204kg of peak downforce, but if I had my name against a build slot I’d definitely take up Aston’s offer to delete it from the specification. To me the V12 feels like a baby DBS Superleggera rather than a fire-breathing Vantage-plus. Nevertheless, a car like this is never about rational spreadsheet arguments – and the emotional appeal of its huge powerplant and relatively dinky body remains, as in previous V12-powered Vantages, huge and undeniable.