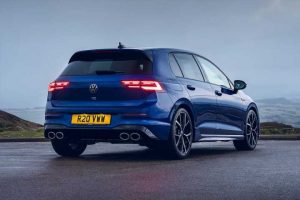 Feel like you need to see and hear what all the fuss is about? Step this way…

The Mk7 Golf R used to cause arguments in the office. (Back when we had such a thing.) Everyone respected it, of course. It was too manifestly fast and able for it to not be held in high regard. But not everyone liked it. Not in the doting, 'God-it's-good' way that people used to like the old Megane 275 Trophy. No one needed to explain why they liked that car. It was as plain as day. People who really liked the Golf R usually had to explain why. It was a thinker.

Until the time came to allocate cars for any given weekend – then it was a bruiser. Because no one in the history of automotive journalism complained about being lumbered with a Mk7 Golf R. Quite the opposite. Moan about its various inert qualities one minute; quietly swipe the keys the next, because you've got, 'stuff to do this weekend'. And that was the secret, of course – the Golf R is a can-do car. So-so on a track day, perhaps; job done everywhere else.

Volkswagen has naturally set out to repeat that trick. It is what sold the car in terrific volume last time around (that and ultra-competitive lease deals) and you can rest assured that the Mk8 comes with no intentional thinning of the usability bandwidth. Instead the firm has endeavoured to fix the other side of the equation.

We're yet to discover if the new Golf R really can 'Drift' (the Performance Pack-equipped cars are due later) but it hardly matters anyway. Simply making the car 15 per cent more intriguing to drive than it already was would likely be enough to sway any fence-sitters. Not least because most already had one size nine secretly planted on the fan club side.

Dan has already written about the Mk8 extensively – but seeing really is believing when it comes to the fastest Golf. Hence a video missive from the field. Enjoy.