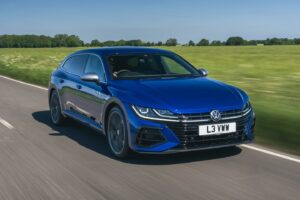 A Golf R for grown-ups? Or a fast VW too far?

Sometimes a car and circumstance are so perfectly matched that the experience lives longer in the memory than it otherwise might. There are the obvious ones – a 488 Pista when Anglesey is warm and dry, a Caterham when the local lanes are empty – and then the far more unassuming instances. Because sometimes it’s dark, wet, and late, you’re 150 miles from home and three junctions of A11 are closed. But with a VW Arteon R Shooting Brake, that’s not the end of the world. If there’s a car to relish the journey in, it’s the big Volkswagen. No, really.

A reminder of what this is, to start with, for those who don’t know their Tiguan R from Touareg R and Golf Clubsport 45 from Golf R Performance Pack. The Arteon R uses the same powertrain as the Golf equivalent, with 320hp and 310lb ft from a 2.0-litre, four-cylinder turbo, a seven-speed dual-clutch gearbox is standard and – perhaps most interestingly – so is the R Performance torque vectoring rear axle. There isn’t a Drift Mode here, but there is the same ability for 100 per cent of drive torque to reach either rear wheel. So, presumably, if you tried hard enough…

All that said, the Arteon is very clearly not a Golf to look at, and that’s important given the premium the Shooting Brake will command. It’s as good in reality as it is in pics, long, sleek and handsome. A Golf R wagon, by comparison, looks a little stodgy. The sheer size of an Arteon means that, even with a less capacious body than a traditional estate, there’s still tons of space: 565 litres in the boot with the seats up, and more than 1,600 with them down. Anyone who needs more than that probably wants a Discovery. Or a van.

The driving environment is familiar, but benefits from a proper gear selector (as opposed to the switch being rolled out elsewhere) and logical HVAC controls underneath the touchscreen. It must be as tedious to read now as it is to write, but the important stuff should have simple controls – the Arteon is better for them.

An educated guess could probably be made on the driving experience given its architecture and the cars that have preceded it. On the standard 19-inch wheels (the pics here are of the optional 20-inchers) the ride is poised and compliant, ‘Race’ is overtly aggressive (especially odd in something this large), the DSG is sometimes a touch sluggish (not helped by a torpid eco mode) and the Individual setting is invaluable. Because there’s a really good fast car under there, with it configured out of the presets.

With 15 damper settings, somewhere between Comfort and Sport on the dial seems a nice balance of body control without compromising refinement. Given the effect big wheels have had on recent VW flagships, it again seems sensible to stick with the tandard rims. Even though, yes, these 20s look great. Keeping the powertrain in Sport makes it alert without the kickdown being too aggressive, and a Pure engine sound keeps the piped in growl at bay. Volkswagen steering seems less cloying than it was, so the heavier Sport suits the bigger car.

With all that set, the Arteon R Shooting Brake is ideal for a late-night dash. If not as rampant as the lighter Golf, it’s still convincingly fast, the refinement is hard to fault, as is the gratifying sensation of an accomplished, adept, comprehensively talented family wagon.

Granted, a lot of those traits apply to the regular Arteon, and this has been on occasion when the faster, larger VWs have struggled – they’ve often felt too much like a normal one. Not this time around, though, pleasingly, thanks to that new rear axle. Those situations where Passats and similar would disappoint – blundering their way through tighter bends and reluctant to change direction – the Arteon is much more willing.

A longer wheelbase means it’s less immediate than a Golf, but it still turns keenly and accurately. The torque splitter means throttle input aids exit rather than hindering it, with the car powering out of the corner in really satisfying fashion as it helps the last couple of degrees of steering lock off. It can go further, if you’re inclined, which is probably as surprising to read as it was to discover. But with power early enough into a bend (and a slippery enough surface), the Arteon really does do a convincing Drift Mode impression. Useful to know…

Of more importance, of course, is the fact that this Arteon R combines traditional VW attributes with a fleet-footed driving experience that’s much less familiar. The fact it’s all housed in something this handsome must count in the Shooting Brake’s favour, too. It’s not gripe-free, though; being brutally honest, if you want a car with Golf R power, similar chassis hardware and 1,600 litres of boot space, what about a Golf R estate? Which sounds glib, though without a more exotic powertrain – imagine an Arteon with the five-cylinder, or larger V6 – the comparisons are inevitable. This is undoubtedly more stylish and interesting than a Golf, but at £52,000 (or £57k as tested) it’s likely to carry a £10k premium over the smaller, faster car. And it’s not that much more desirable.

Still, not everyone wants to drive a Golf R, and the Arteon’s ability to transfer much of that ability to a bigger package is to be applauded. This is entertaining to drive in a fashion no similar VW has ever been, while still perfectly suited to motorway slogs and more ordinary journeys. A wet Wednesday on the A11 should never be memorable; it’s to the Arteon R’s credit that it will be fondly recalled for a good while yet.