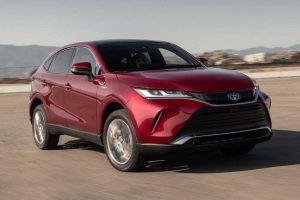 The all-new 2021 Toyota Venza has a lot of balls to juggle. It’s the first Toyota SUV to be powered exclusively by a hybrid system, its design has to push the brand in a new direction without being offensive, and it’s being billed as the most luxurious SUV in Toyota’s lineup. So, how well is the Venza handling all of its newfound responsibilities?

While its styling may not be for some, the new Venza isn’t what you’d call ugly. It’s also undeniably different from what Toyota is doing with the rest of its lineup lately, and it’s a sign of things to come for the marque. Looks are subjective, but we think the Venza does enough to stand out from the crowd without resorting to being outlandish or offensive. That’s the design ball up in the air, no problem.

As for motivation, the 2021 Venza utilizes what Toyota calls Hybrid System II, featuring a 2.5-liter DOHC four-cylinder under the hood augmented by three electric motors—two at the front axle and one at the rear. All told, the motors and engine generate a combined 219 horsepower that’s fed to a continuously variable transmission. That might seem modest for an SUV that weighs 3,865 pounds, and it is.

On a perfectly flat runway with a well-thought-out launch from one of the members of our test team, the Venza hit 60 mph in 7.5 seconds; not great, but a decent number for this type of vehicle. On a freeway onramp with an uphill grade, however, that 7.5 seconds can feel a lot more like 10. Should you need to stop from 60 mph in a hurry, the Venza’s regenerative braking combines with traditional steel rotors to haul you down in a solid 121 feet.

The Venza is similarly average in our figure-eight test. At 27.7 seconds, the Venza is tied with the much bigger and heavier (4,462 pounds) Toyota Highlander V-6 we recently tested. That said, this is a hybrid-powered, people-moving SUV after all, and limit acceleration, braking, and handling probably aren’t the first things on its intended buyers’ minds.

But fuel economy no doubt will be, and thanks to its hybrid system the Venza manages an EPA-estimated 40/37/39 mpg city/highway/combined. Eagle-eyed readers will rightly point out that the Toyota RAV4 Hybrid’s numbers are slightly better at 41/38/40 mpg. Interestingly, the RAV4 also offers more cargo space—33.5 cubic feet to the Venza’s 28.7.

Not only is the RAV4 more spacious and marginally more efficient, it’s also significantly less expensive. Last year when we pitted a RAV4 Hybrid against a Honda CR-V Hybrid, we tested an XSE trimmed model (the highest trimmed RAV4 Hybrid you can buy) that topped out at $38,557. Our Venza test car, on the other hand, was a fully loaded Limited model that rang in at $43,325.

At this point, you’re probably wondering why you’d drop an extra five grand or so on the Venza when the RAV4 delivers (slightly) better fuel economy and more space behind the rear seats? It’s all down to the Venza’s last ball to juggle: luxury, baby.

Hop inside, and the first thing you’ll notice is the way the 2021 Venza supports its occupants, literally. The front seats in Toyota’s brand-new Highlander feel like the kind of frumpy armchairs that have been sitting in your grandfather’s house for the last 30 years. In the RAV4, they’re typical Toyota fare—not bad, but not great. By stark contrast, the chairs in the Venza are like a set of sleek, leather-trimmed Aerons. They’re supportive without limiting your range of motion, and they have the option of being heated and cooled.

Acoustic glass and special insulation in the wheel arches, floor of the cabin, headliner, and in the engine bay all help insulate the Venza’s cabin from the outside world. Even the suspension has been specially tuned to resist transmitting nasty road noise into the cabin. It works. The Venza’s cabin is almost always a whisper-quiet place to be.

Why almost? Because even with that special sound deadening in the engine bay, the Venza’s four-cylinder will occasionally break up the cabin’s dojo-like serenity. Stomp on the accelerator, and you’ll hear it yowl and thrash away at the firewall. It’s a minor irritation, because aside from the harshness of the engine, the powertrain is as sweet as can be.

Despite the Venza feeling sluggish at times, its three electric motors are a seamlessly integrated part of the powertrain. When you’re just cruisging along, unless you’re looking at the power gauge in the instrument cluster, you’re completely unaware of what motor is being used or if the engine is even on. The Venza just hums along in the background doing its thing and rarely inconveniences its occupants while doing so.

As features editor Scott Evans put it: “The hybrid drivetrain is unimpeachable. It’s super smooth and well blended so you never notice any hand-offs. Even the hybrid brake pedal is really good. It’s one consistent motion all the way through.”

The cabin’s comforting feeling is affirmed by the way the Venza rides out on the open road. It easily handles everything except the most tortured of pavement and is rarely caught out by big lumps and bumps. It even handles the occasional pothole with ease. Senior features editor Jonny Lieberman said there’s a BMW-like quality to the Venza—high praise for a vehicle in this class.

Unlike the Bavarians, however, Toyota opted to use capacitive buttons for both the climate controls and the volume—which is now a “+” or “-” instead of a proper knob. They can make simple actions significantly more convoluted than they need to be and often require you to take your eyes off the road to make sure you’re tapping the right key. Plus, the lack of physical volume knob annoys at once—Toyota should have learned from Honda’s mistake in that regard.

Leaving aside its (very) minor quirks, the Venza is a well-thought-out and well-executed crossover. The Toyota team worked hard to make the new Venza different in order to shed the image of the bland SUV that used to bear the Venza name. From our perspective, Toyota got the balance just right, and the Venza is juggling all of its responsibilities with confidence and competence to spare.