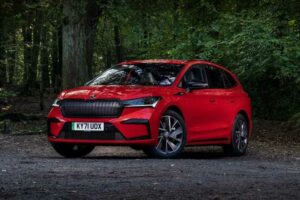 You can now buy an Enyaq iV with 265hp and all-wheel drive. Should you?

In case you hadn’t heard, the new Skoda Enyaq iV is kind of a big deal. Not only is it the manufacturer’s first real bite of the all-electric cherry, it is also pitched as a genuinely usable, and vaguely affordable, battery-powered family crossover – precisely the sort of car the world and his wife are apparently Googling in the aftermath of three-hour petrol station queues. Moreover, a surprising amount of public interest generated while on test suggests, albeit anecdotally, that the Enyaq is doing many things right.

Of course, this isn’t the regular Enyaq. We’ve leapfrogged over the less interesting models to land on this, the new Sportline 80x. Until the vRS version launches, it will be the flagship variant, neatly differentiated by the burlier 265hp output gifted to it by an additional electric motor on the front axle, making the car all-wheel drive. With 313lb ft of torque now instantly available, the 80x is sufficiently punchy to shrink the Enyaq’s 0-62mph time to 6.9 seconds and prompt Skoda to fit lower-riding sports suspension as standard.

The latter drops the new model 15mm at the front and 10mm at the rear onto 20-inch wheels; 21-inch wheels are on the option list, as are adaptive dampers. The latter are included in the £585 Drive Sport Package Plus, and on past experience, I’d suggest seeking them out. Which isn’t to say the lower suspension unduly affects the Enyaq’s pleasant-to-drive reputation. For one thing there’s a fairly respectable amount of tyre sidewall to help smooth things out; for another, it’s clear from the outset that the manufacturer has left plenty of latitude in the chassis tune for a sportier model to exploit.

Consequently, it is possible you might think not think the 80x entirely worthy of its Sportline badge. But that would be to ignore recent history. Skoda has rarely tacked the pricier trim level down with much conviction; compared to most equivalent models, the much-admired Superb wagon we ran on the fleet a few years ago roved about its spring travel with notable abandon. With more than two tonnes to manage, the Enyaq is sterner and cleverer with its body control, and accurate (though resolutely uncommunicative) through middleweight steering. Yet it is generally content to extol a well-rounded sort of proficiency, and – one can only assume – leave enhanced lateral performance to the forthcoming vRS.

For much of the time, this compromise is to the benefit of the 80x because the benign, tidily balanced handling is ultimately a decent foil for the new output. Not so long ago, 265hp asymmetrically split between axles would be sufficient to register a humble family car at the pointier end of the power-Richter scale; in 2021, in the wham-bam world of hugely accelerative electric vehicles, the outcome is more adequate than it is eye-opening.

To 30mph, aided by the obvious traction benefit of all-wheel drive, it is predictably breakneck. You’ll make gaps in the traffic that are traditionally the preserve of superbike riders. But the 80x is fairly quick to level off thereafter. As the 0-62mph time and 99mph top speed suggest, the car is pleasantly swift rather than objectively fast – even in its more responsive ‘Sport’ setting. Nevertheless, the straight-line performance is a cut above the rear-drive version, and, as ever, is helped along by a familiar EV trait; namely that there’s no anti-social guilt or try-hard shame associated with repeatedly and mercilessly flooring it. Progress everywhere is silent, and uniformly brisk.

Stopping, somewhat inevitably, has the potential to seem like a bit more a faff. It’s so easy to carry mass-defying speed in the agreeably sprung and deathly-quiet Enyaq that there’s a tendency to rock up at junctions at a slightly more senior pace than you were anticipating. The brakes are up to the job and impressively easy to modulate for an EV, but plainly there is a lot of momentum being kept in check. And that’s without a car full of passengers to factor into the wrong side of the equation.

That it seems ponderous under heavy braking is hardly a revelation, though. After all, there’s an 82kWh battery (net capacity 77kWh, mind, with 125kW rapid charging capability) mounted beneath your feet. WLTP testing suggests its combined range is a commendable 303 miles, although we never got to see what real-world distance the 80x predicted for a full charge. For what it’s worth, the automatic battery regeneration mode, which marshals the familiar drag-effect based on your immediate circumstances, is fairly savvy. You can add to its efforts using the paddles – there are three additional levels of regen to choose from – but more often than not it’s simpler to let the system do its thing.

Same goes for the car, really. Not unexpectedly, this is a sensibly engineered, right-sized and adequately appointed sort of EV. The extra power might not threaten to rearrange your internal organs, but the 80x delivers meaningful gains over the basic Enyaq if only because the headline increase in power and driven axles are so cohesively integrated. Its financial saving over the incoming and quicker-still ID.4 GTX is quite modest, but then its 35hp shortfall is quite modest, too. Should the closely related GTX turn out to actually be fun to drive, it’ll have well-earned its premium (and bode well for the vRS). If it’s just more of the same, the 80x might yet prove to be the kind of battery-powered halfway house that people are apparently yearning after.