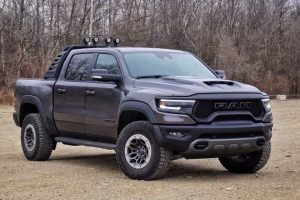 A 702-horsepower luxury pickup truck; what a time to be alive. To think that once upon a time, pickups were nothing but basic boxes designed to get the job done at farms or construction sites. Workhorses through and through, not statement pieces. The 2021 Ram 1500 TRX is far cry from its predecessors; it’s the ultimate lifestyle accessory for those who enjoy all things Hellcat. But what does it really bring to the table? Besides supercharger whine and a ton of power, of course.

After spending a week in one of these behemoths, I was left puzzled. I am a big fan of the Challenger Hellcat, absolutely adore the Durango SRTs, and would my paycheck allow it, I’d seriously consider a Charger Hellcat for my daily Dadmobile. But a Hellcatted Ram truck? I wasn’t convinced. In the end, what I figured out is that it’s not the stuff-hauling, off-road monster that will keep the Ford Raptor up at night—but then again, it’s cool enough for what it is that it doesn’t have to be. 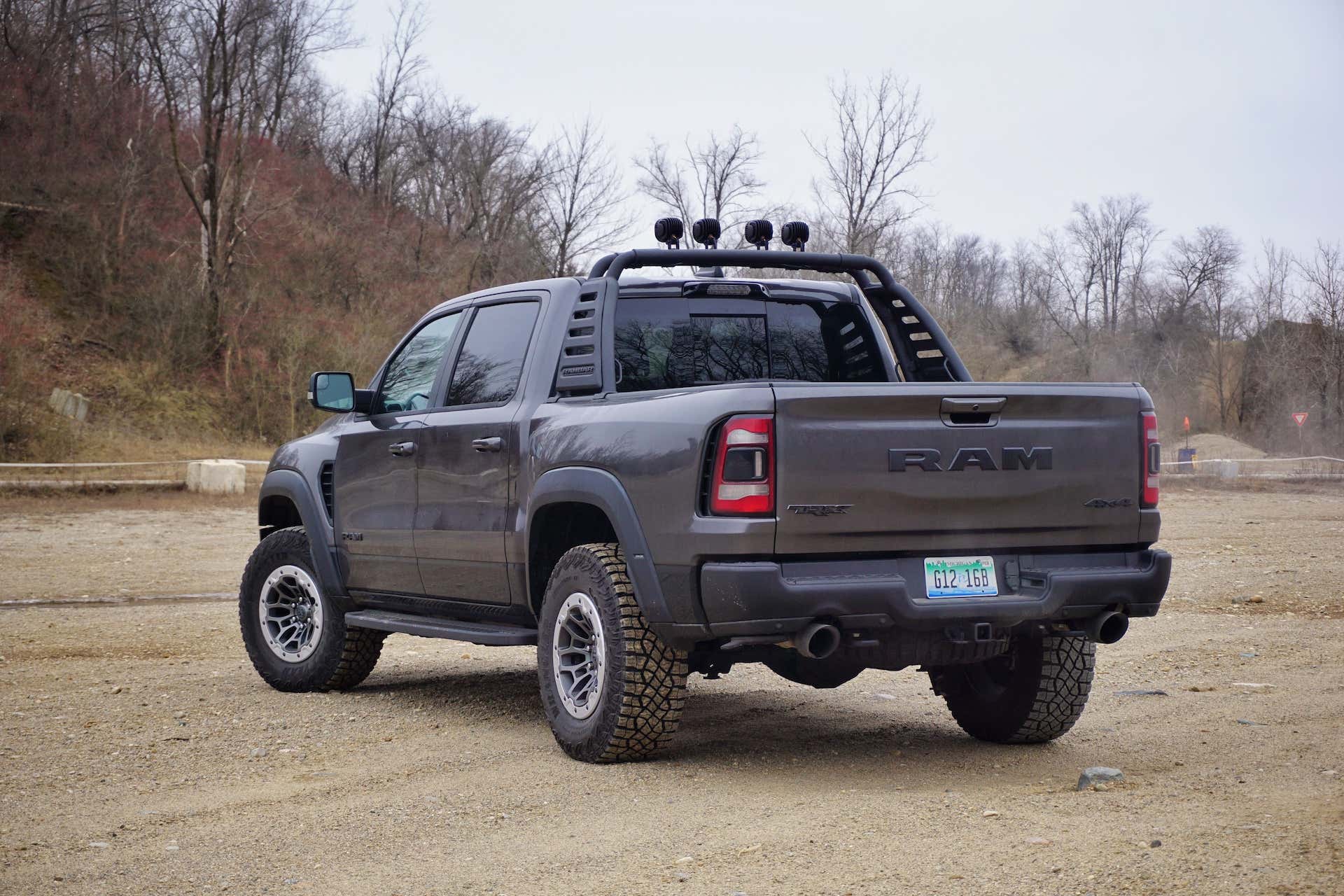 Let’s get the basics out of the way: The TRX isn’t just a Ram 1500 with an engine swap. A lot more went into this truck to make it the hot rod that it is. For starters, you can’t just drop 702 horsepower and 650 pound-feet of torque on a chassis—even one as good as Ram’s—without making some revisions. The supercharged Hemi V8 may be the same one you’ll find in Dodge cars, but it’s tuned differently. After all, what you expect from a two-door muscle car to a four-door pickup truck is quite different. 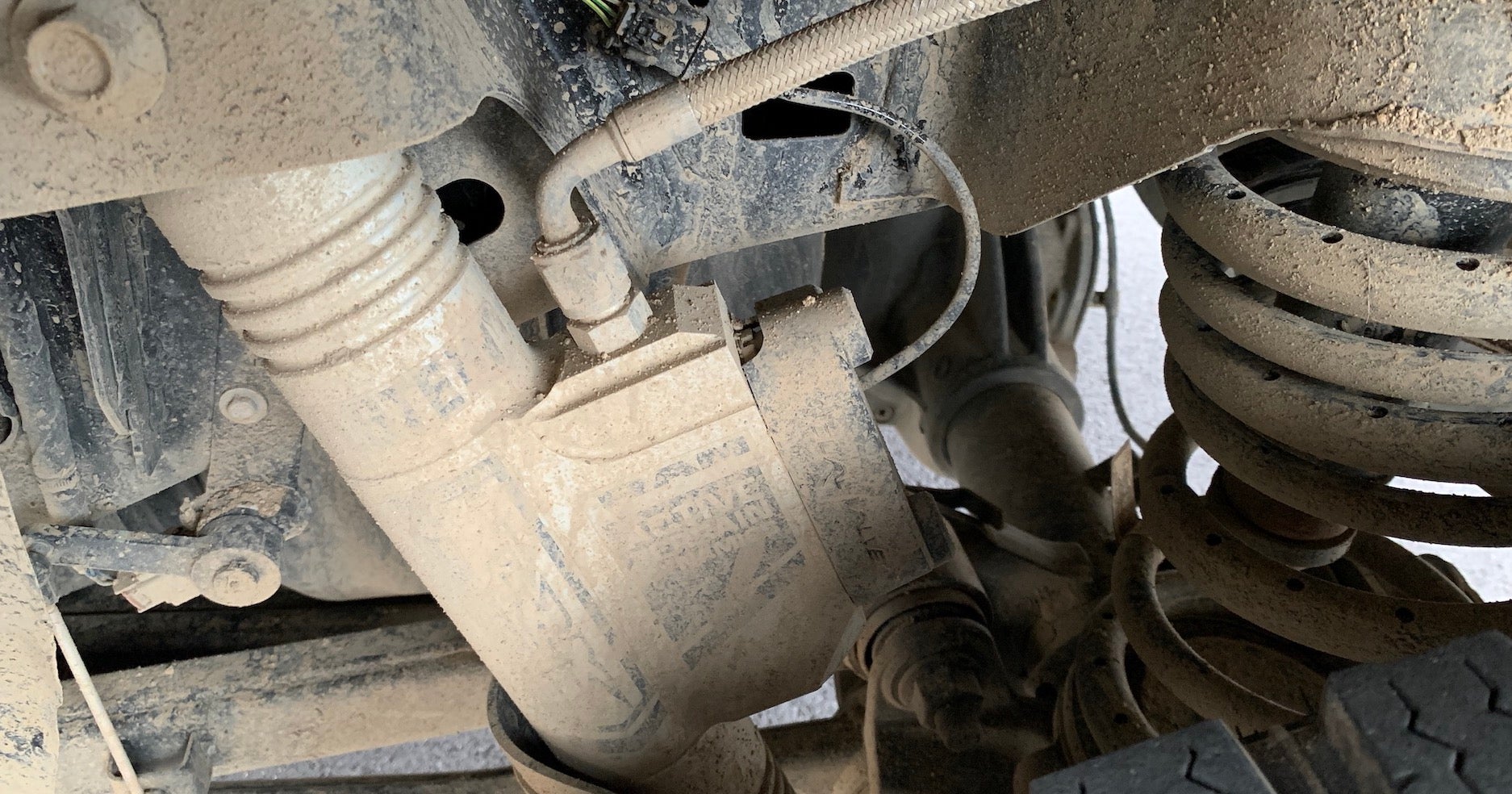 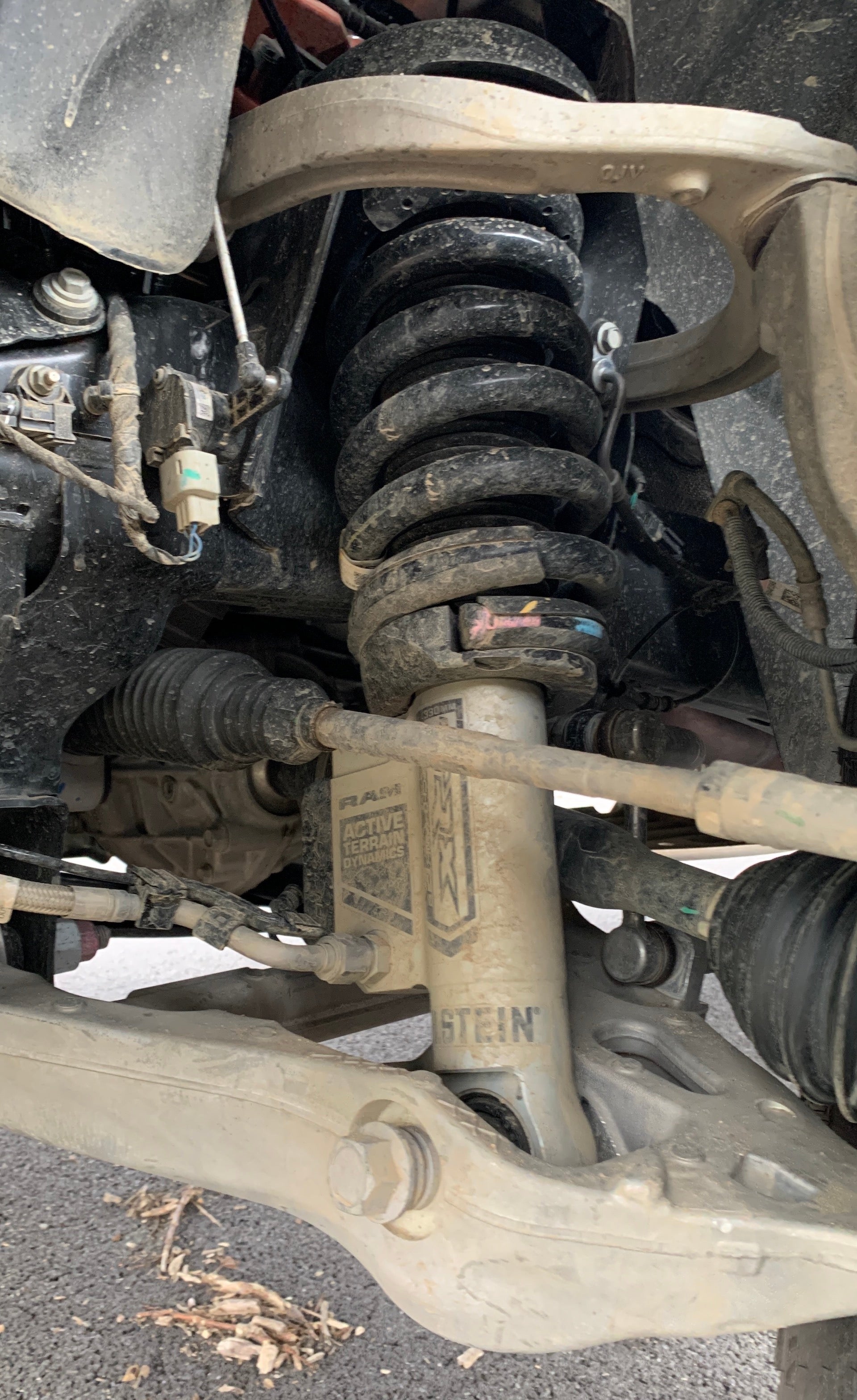 And then there’s the suspension, namely 2.5-inch Bilstein Black Hawk e2 adaptive shocks with three zones of progressive bottom-out control. They’re unlike anything else in the Ram or Jeep lineup, and quite different from what you’ll find on the current-generation Ford F-150 Raptor, as our truck expert Caleb Jacobs has explained before. (That being said, a new Raptor is on its way in February and it’s bringing a few surprises along with it.)

The performance spec sheet may be impressive, but the first area of disappointment, to me, is the styling. It looks bloated, it looks run-of-the-mill, and with the beefy beadlock wheels, optional Ram Bar, and a second spare tire mounted in the bed, it looks like a try-hard, wannabe Baja truck. That’s before we even get to the fake vents. 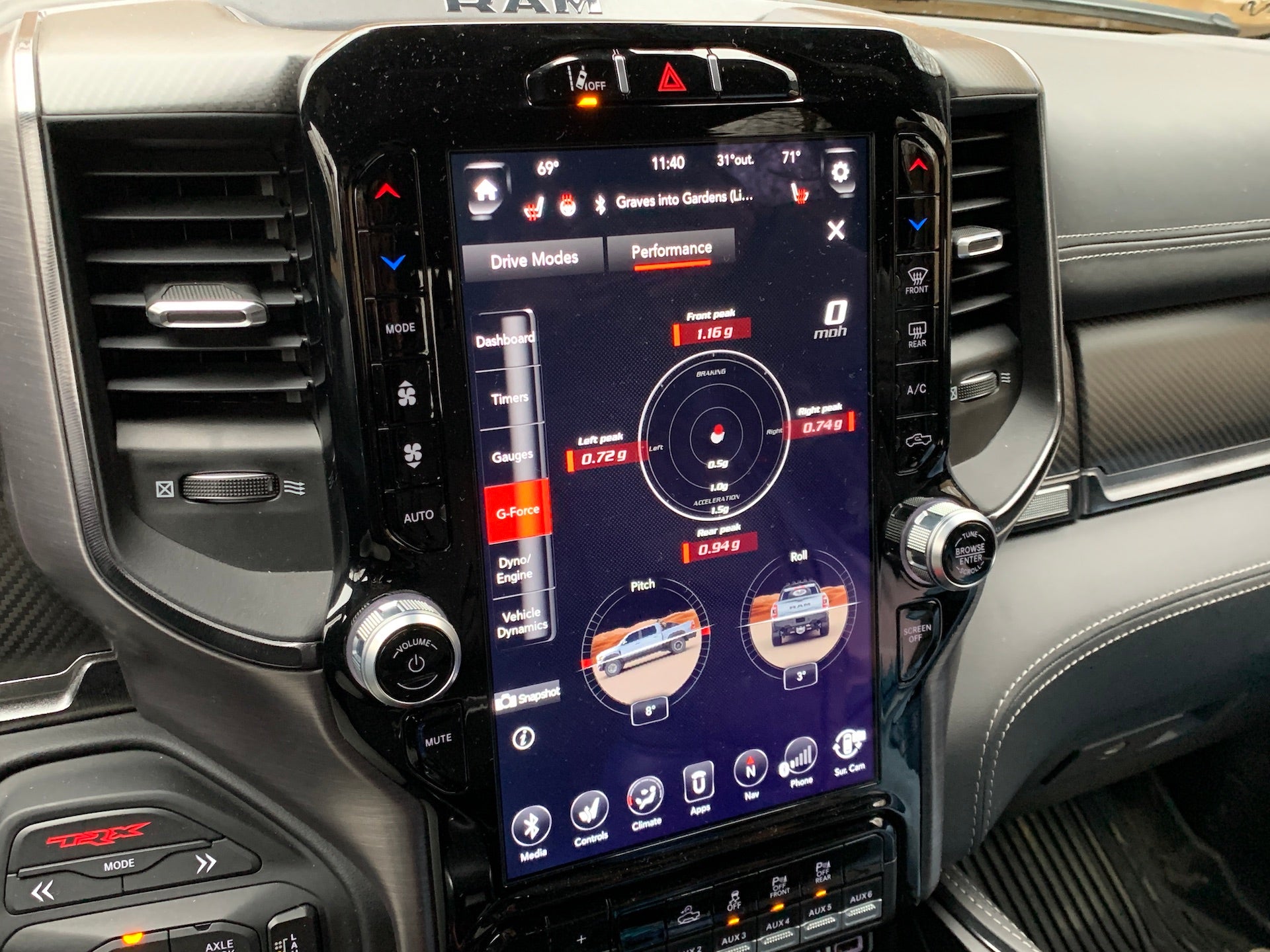 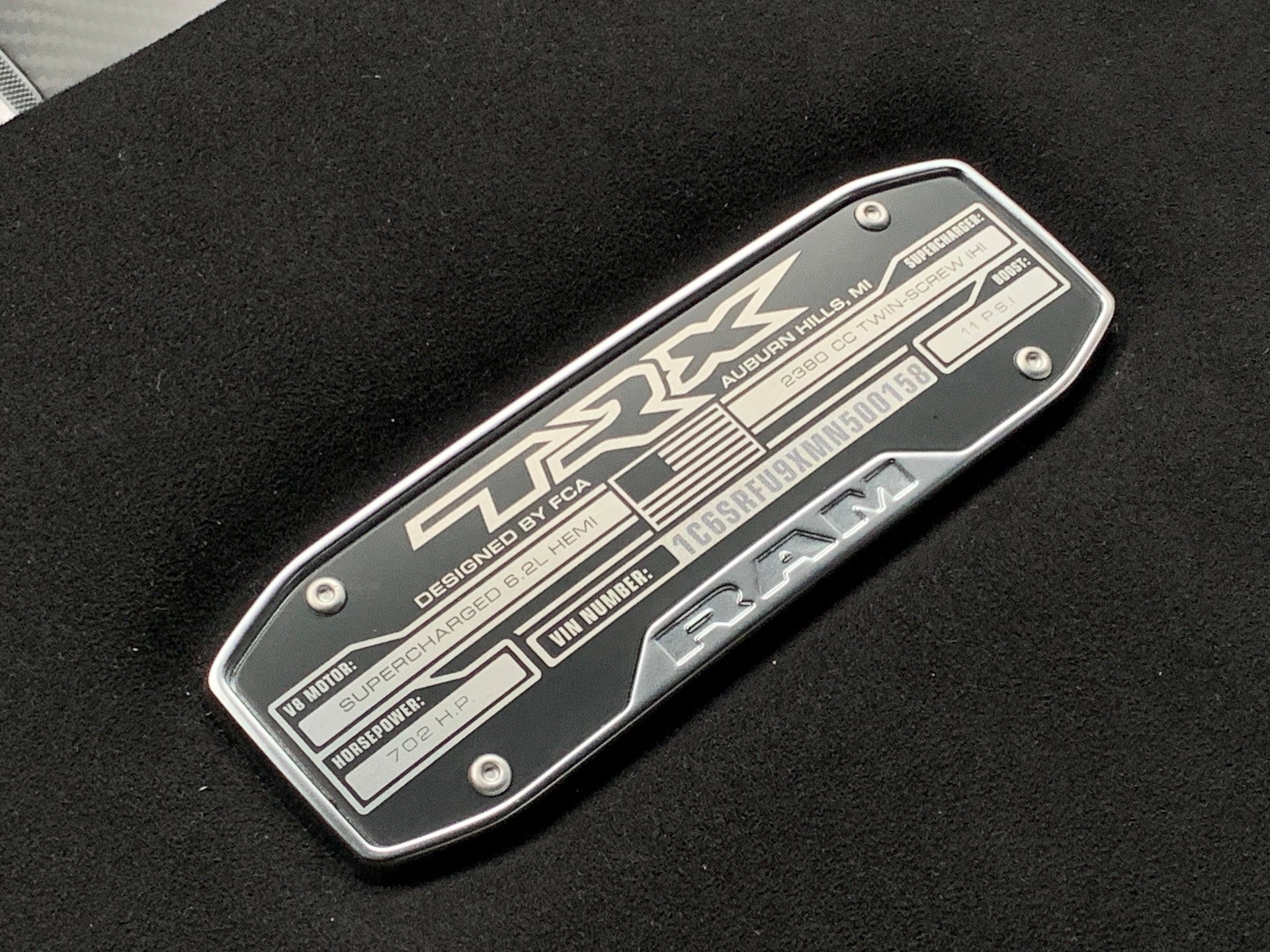 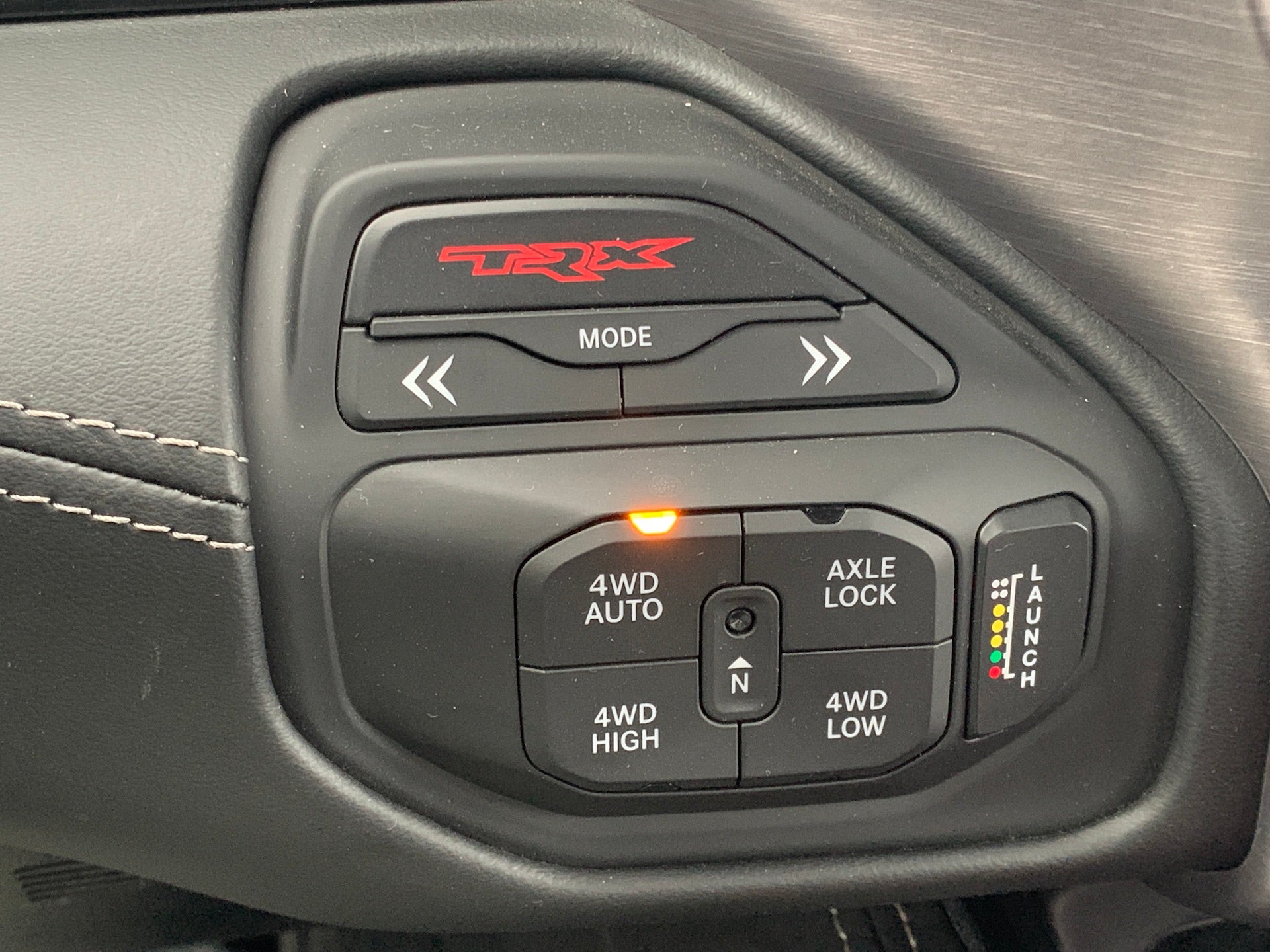 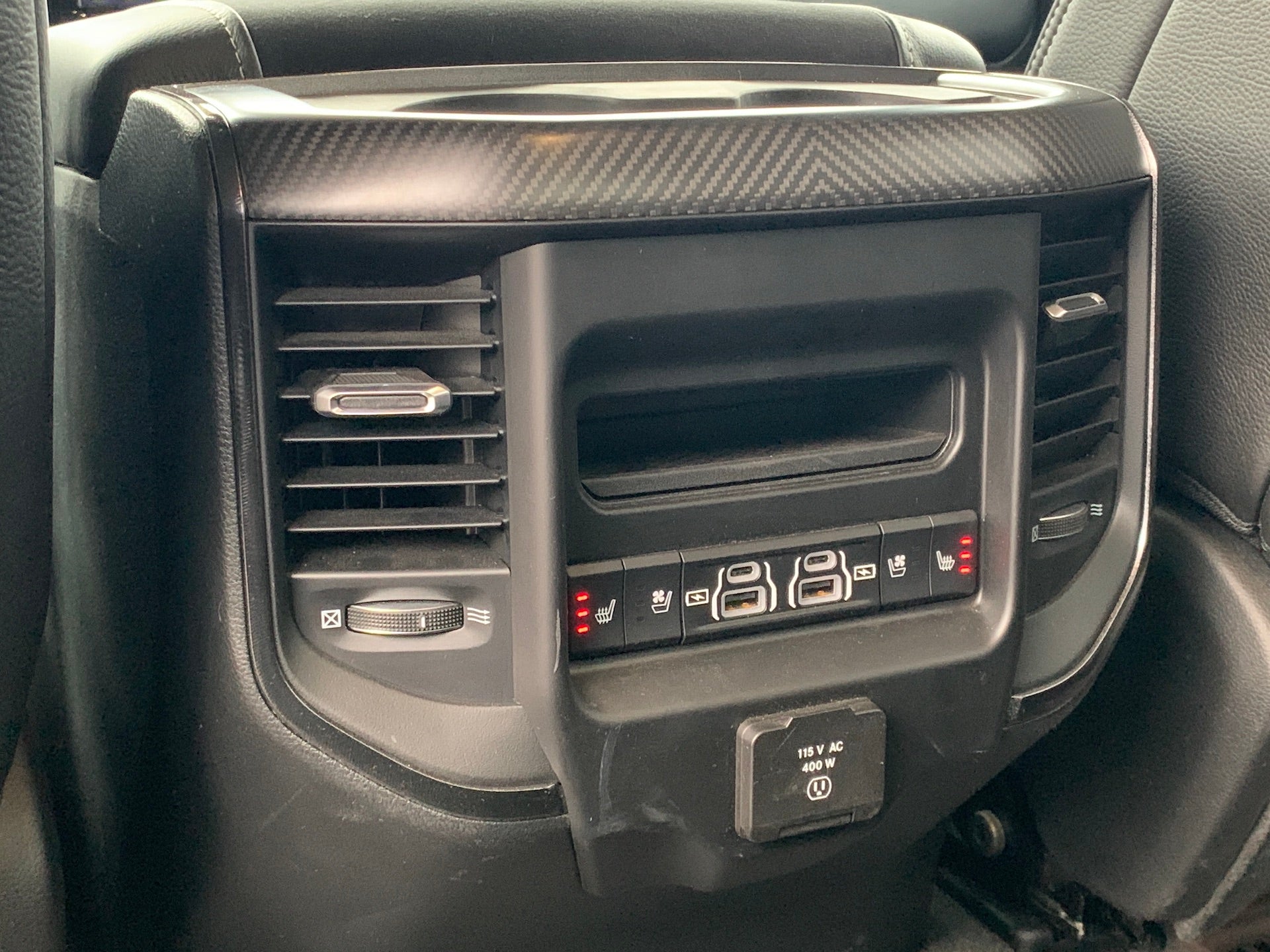 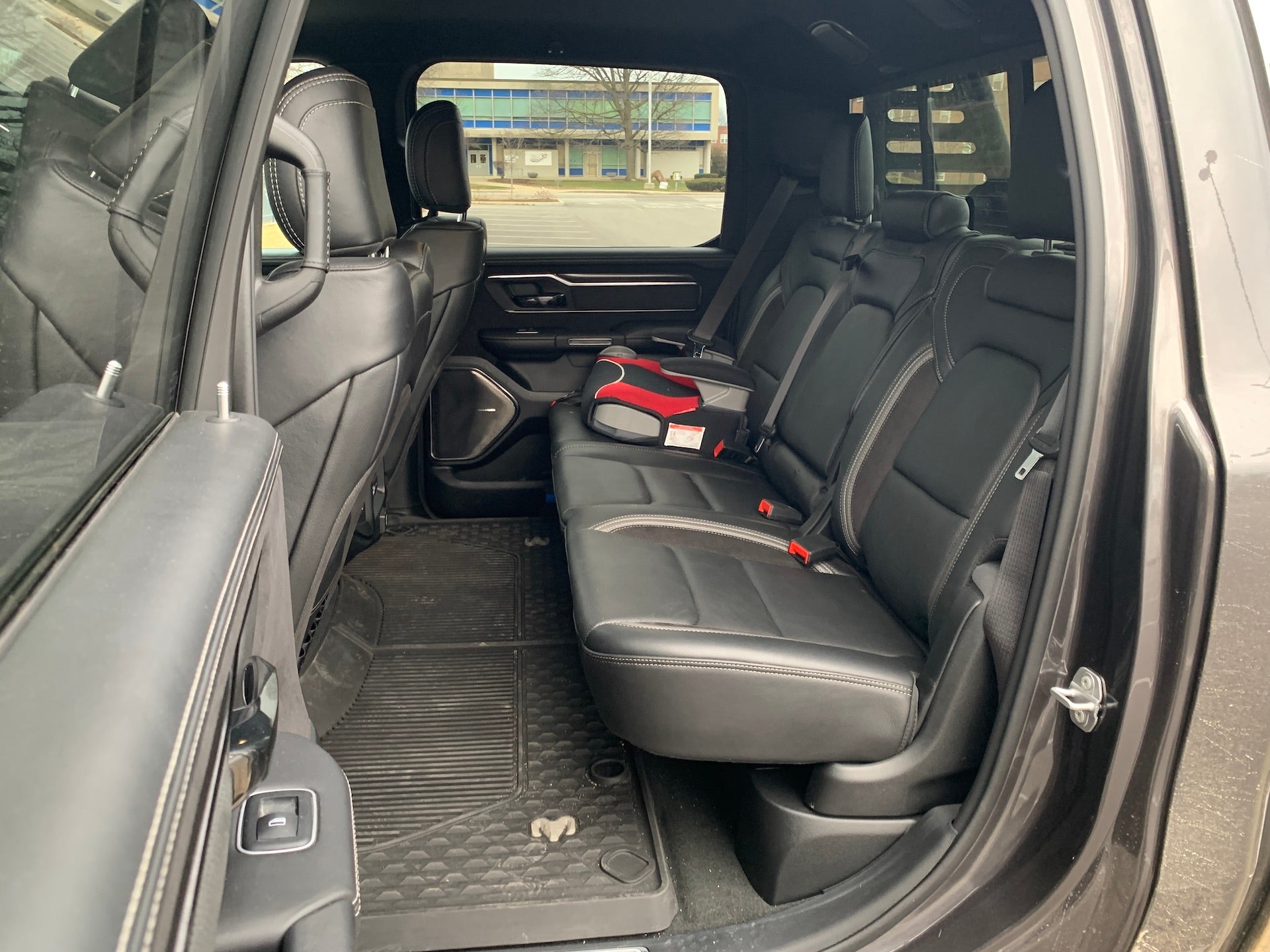 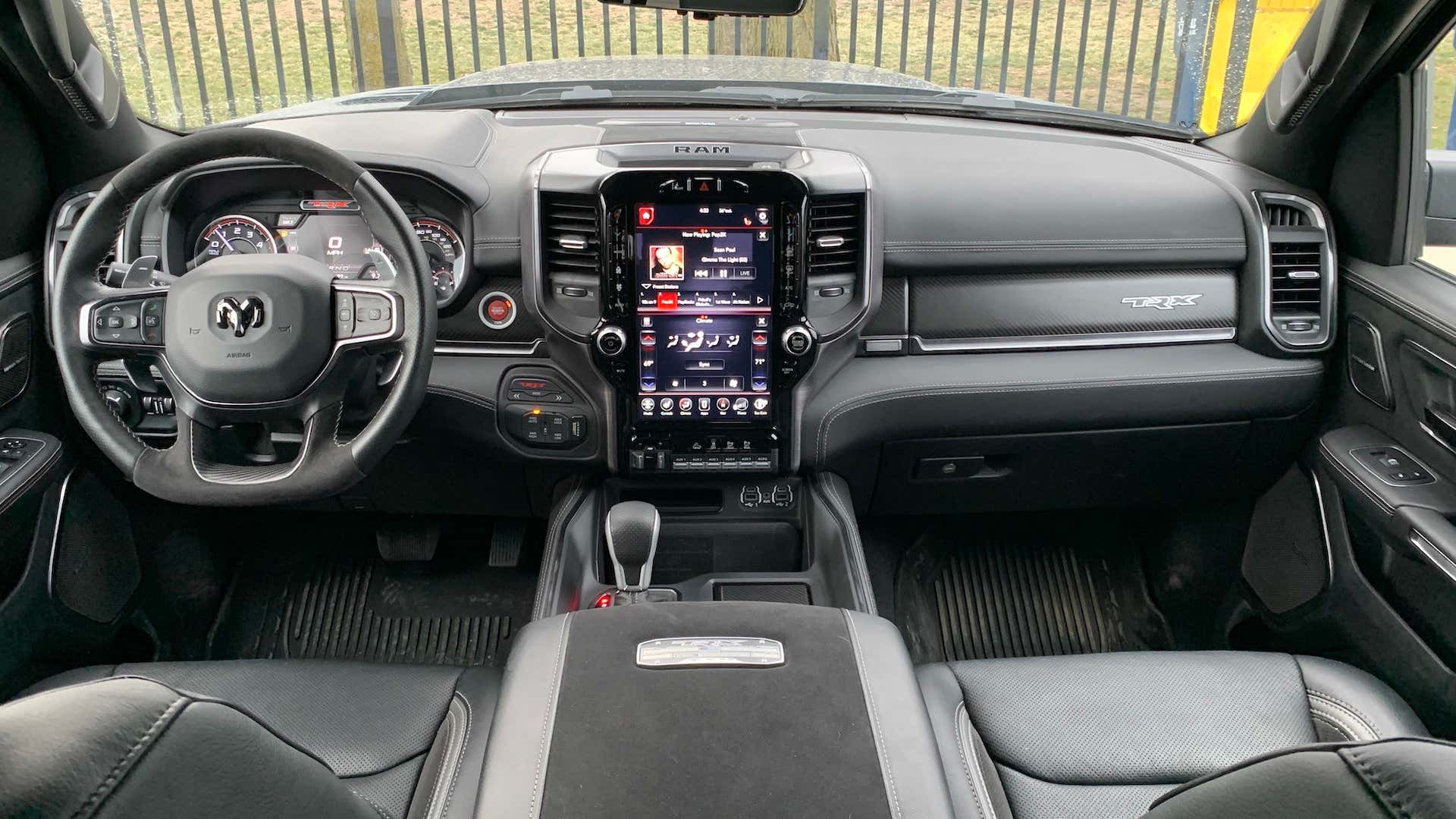 Luckily, the interior is fit for a king, as it’s been the case for the last few years in Ram trucks. Top-notch leathers and other materials, excellent Uconnect infotainment system, customizable displays, and more importantly, comfortable seats. This may be a muscle, off-road, hot rod, call it whatever you wanna call it, but you expect a few niceties for this kind of coin, and the TRX delivers.

With the basics out of the way, the question remains: what does the TRX bring to the table? The answer is: it depends.

I had the opportunity to experience the TRX in three key scenarios: city, highway, off-road. I used it to shuttle my kids around town, drove it on a 400-mile road trip, and took it to the off-road park to see how it performed in the dunes and trails.

Around town, the TRX feels absolutely massive. I’ve wheeled Power Wagons in the city that they don’t feel as far removed from every other vehicle on the road as the TRX does. Visibility due to its height can be compromised at times, but what isn’t compromised is comfort. The truck’s long-travel suspension absorbs impacts without breaking a sweat, making Mitsubishi Mirage-sized potholes feel like mere dents on the road. Seriously, I had to make sure I didn’t run over my Honda Civic while pulling into my house.

The Hemi’s peak horsepower isn’t even tickled during city driving, of course. Perhaps a quick jolt when the light turns green or a speedy merge onto the highway, but daily-driving the TRX is relatively uneventful—until a dude in a sports car pulls up next to you looking all hot and bothered. Or in my case, the driver of a Ford Mustang GT who was clearly annoyed with others and had decided to weave in and out of traffic to get to the front of the line, where I was standing awaiting the green light. 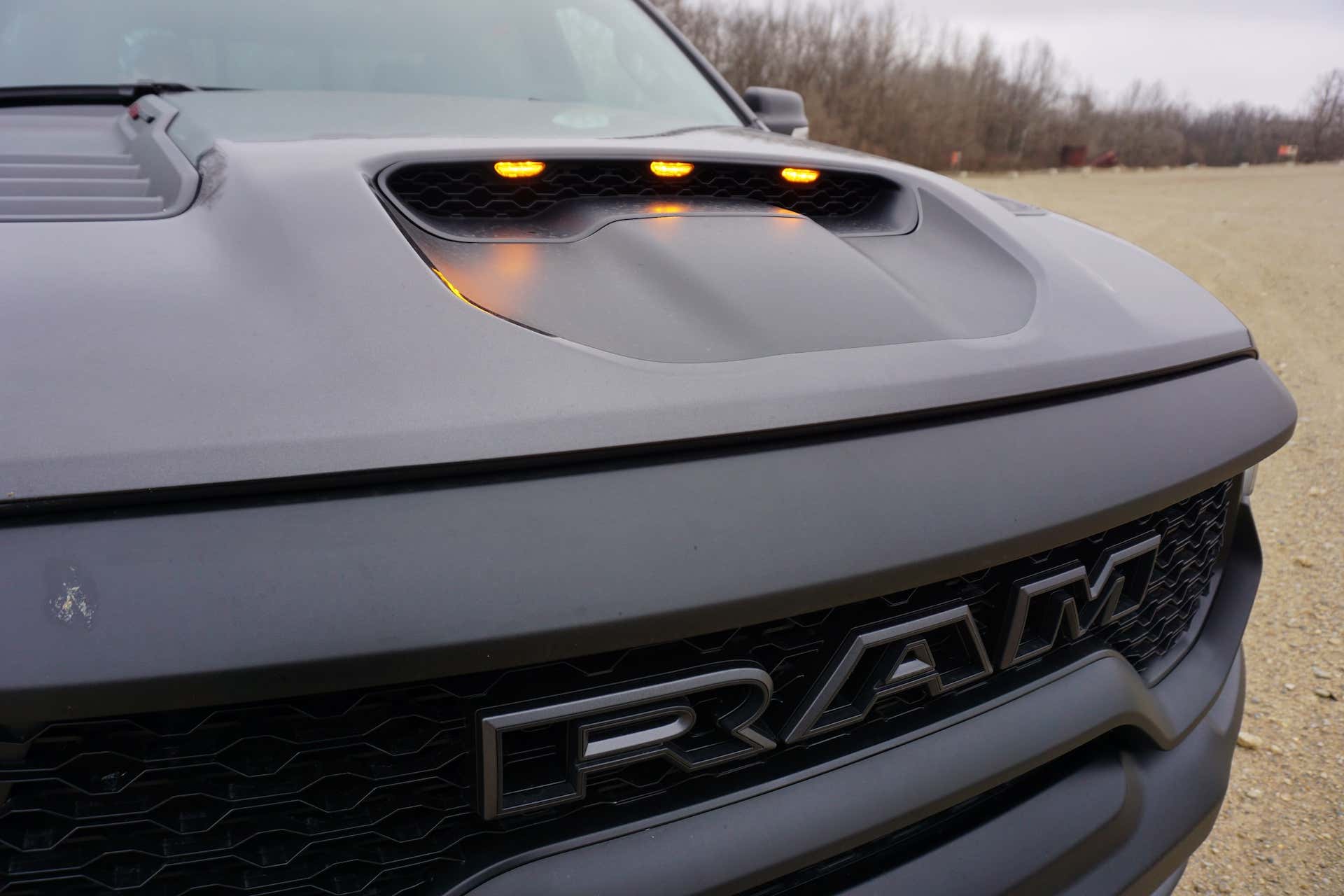 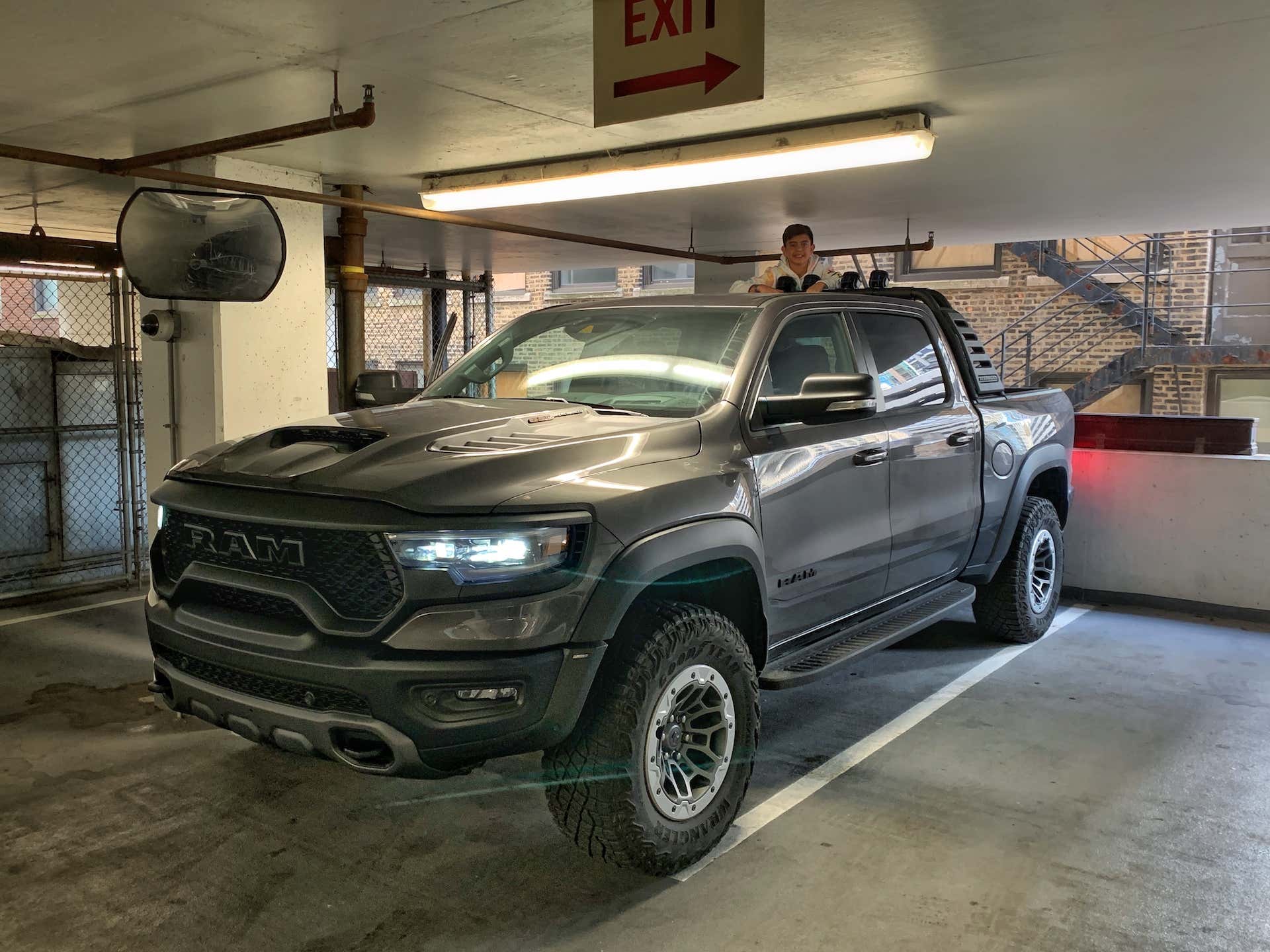 Other things to note: its ride-height makes drive-thru windows a breeze, but drive-up ATMs and multi-level parking lots are a no-go (I had to have my son bend the spotlights back to keep them from hitting stuff at 8.2-foot clearance). And like I said, its lack of panache makes it so absolutely no one knows what the hell you’re driving. If you want to look like you have some cash to flash, get something else that looks its price tag. Otherwise, relish driving a sleeper.

Long-distance cruising is where the TRX shines, with its 6,350-pound body (more with the accessories on my tester) floating down the interstate with devilish speed. It’s a long-range surface missile that commands respect from those around it. Also, it’s where I achieved the best fuel economy of my week-long test, hitting double digits at 11.1 mpg compared to 9.7 around town.

The Ram’s cushy interior is a good place to be for hours on end, something I realized last summer while towing an Airstream camper with a Ram 2500 HD for 3,500 miles. The TRX is no different, keeping me and the fam fresh on a quick same-day drive from Indianapolis to Chicago.

Then there’s the TRX’s off-road performance. This is where I wanted the TRX to shine, to blow me away, to make me say, “Damn, forget the Raptor!” But it didn’t. In fact, it was quite the opposite, but with one exception: it can take some big hits. 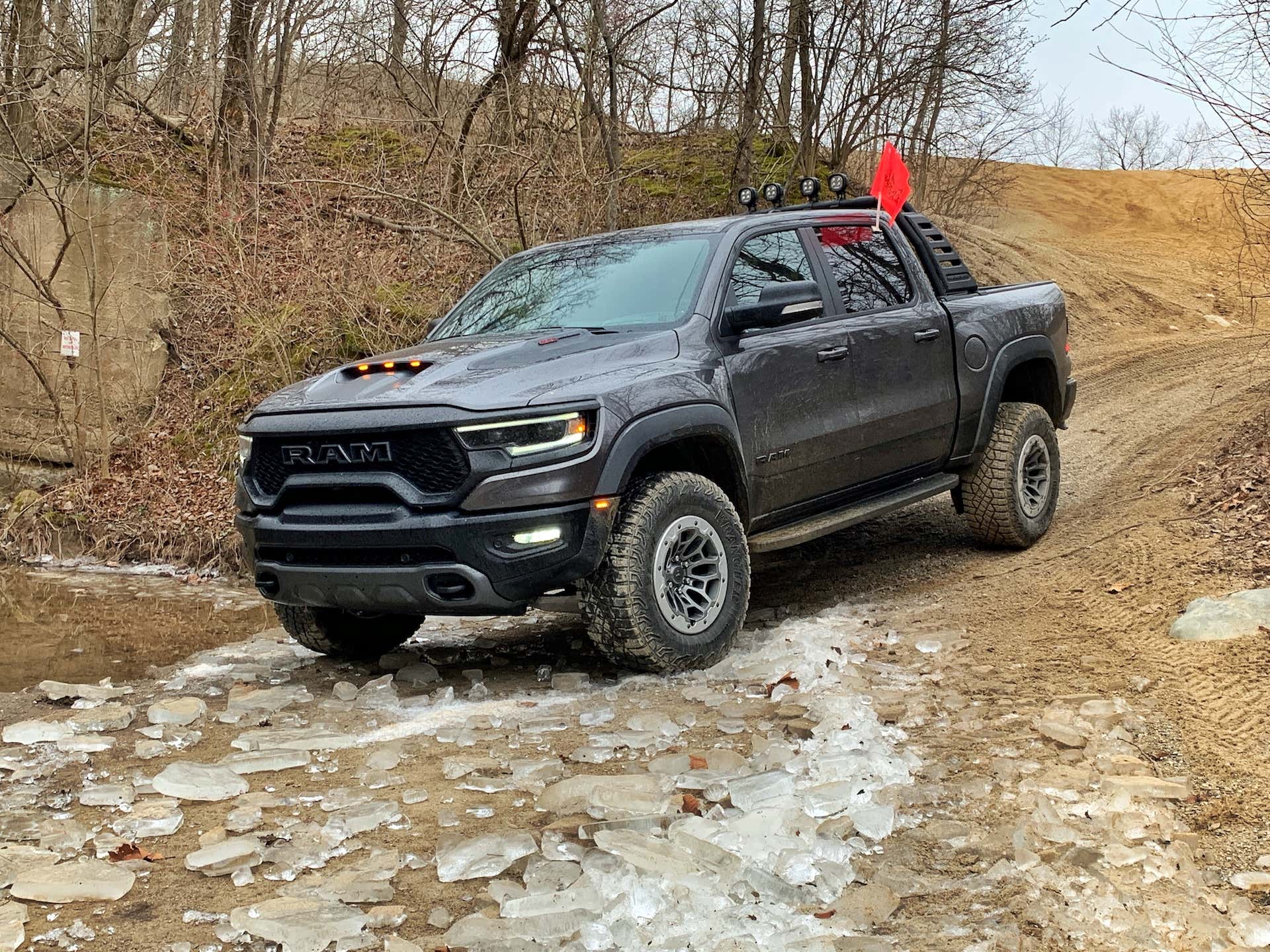 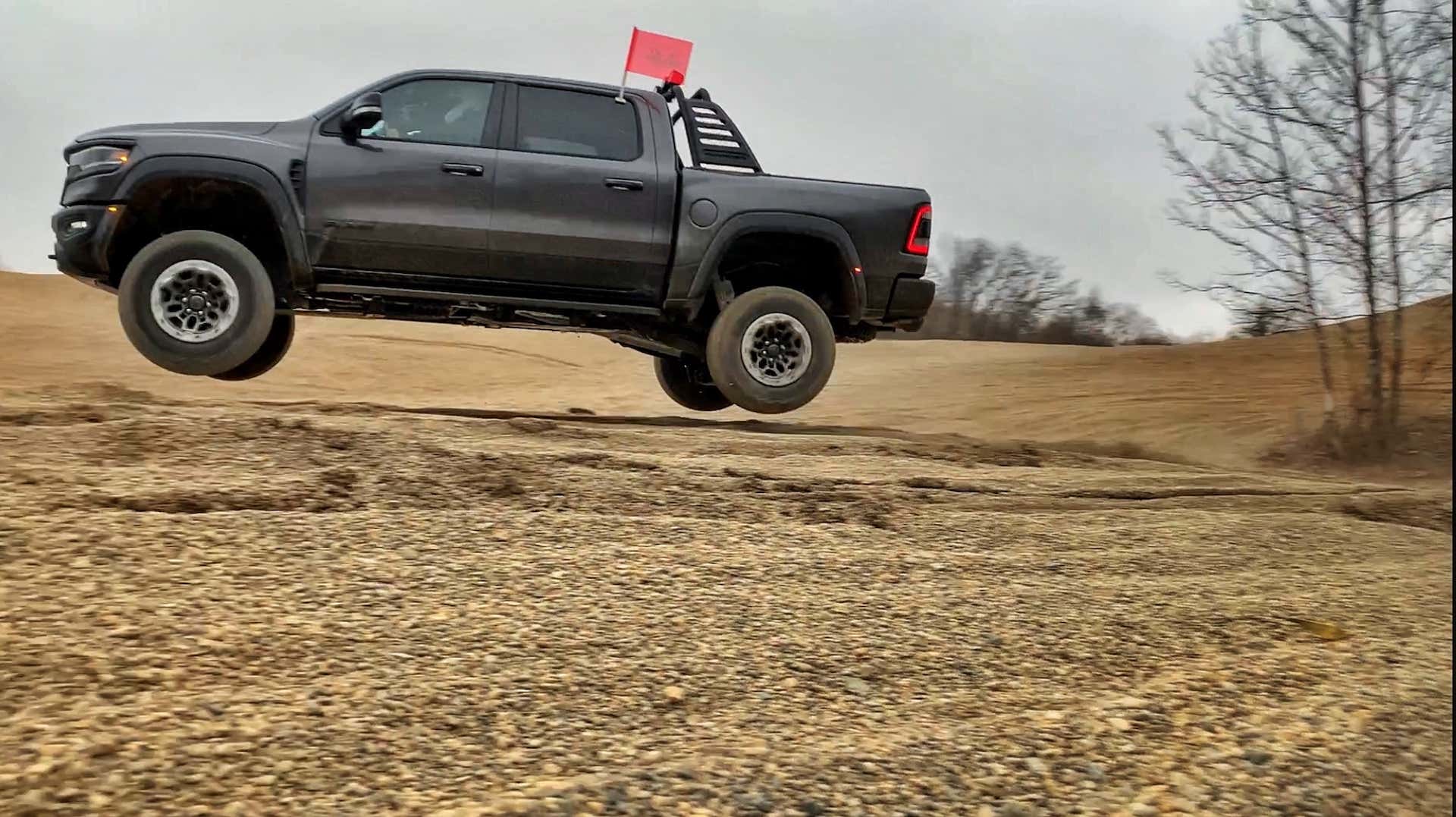 You’ve probably already seen all the photos circulating the internet and social media of the TRX flying through the air. It’s what the truck’s known for, I guess. I set out to recreate my own version of these photos, and I did it. I didn’t catch huge air, but I did get the front tires about three feet off the ground and the rears nearly as much, which is about as high as I’m willing to go on a borrowed vehicle.

The flying endeavor was fun, and it proved that Ram did a bang-on job calibrating the suspension to absorb big hits. And let’s not forget, this is no lightweight racing truck. This is a massive hunk of metal. Despite not catching the kind of air that folks did during the TRX media drive earlier this year, it was clear that the truck instills a sense of confidence and security in the driver that very few other trucks can.  And of course, by “other trucks” I mean the Ford F-150 Raptor.

After a long day of mudding, dune-ing, jumping, and doing all kinds of things that your chiropractor urges you not to do, I understood that the TRX isn’t as agile, quick, communicative, nor enjoyable off-road as the Raptor (which is 700 pounds lighter in similar guise). It simply isn’t. Its massive size, height, and weight don’t help power through obstacles with confidence, and its heavy front end understeers more often than not. 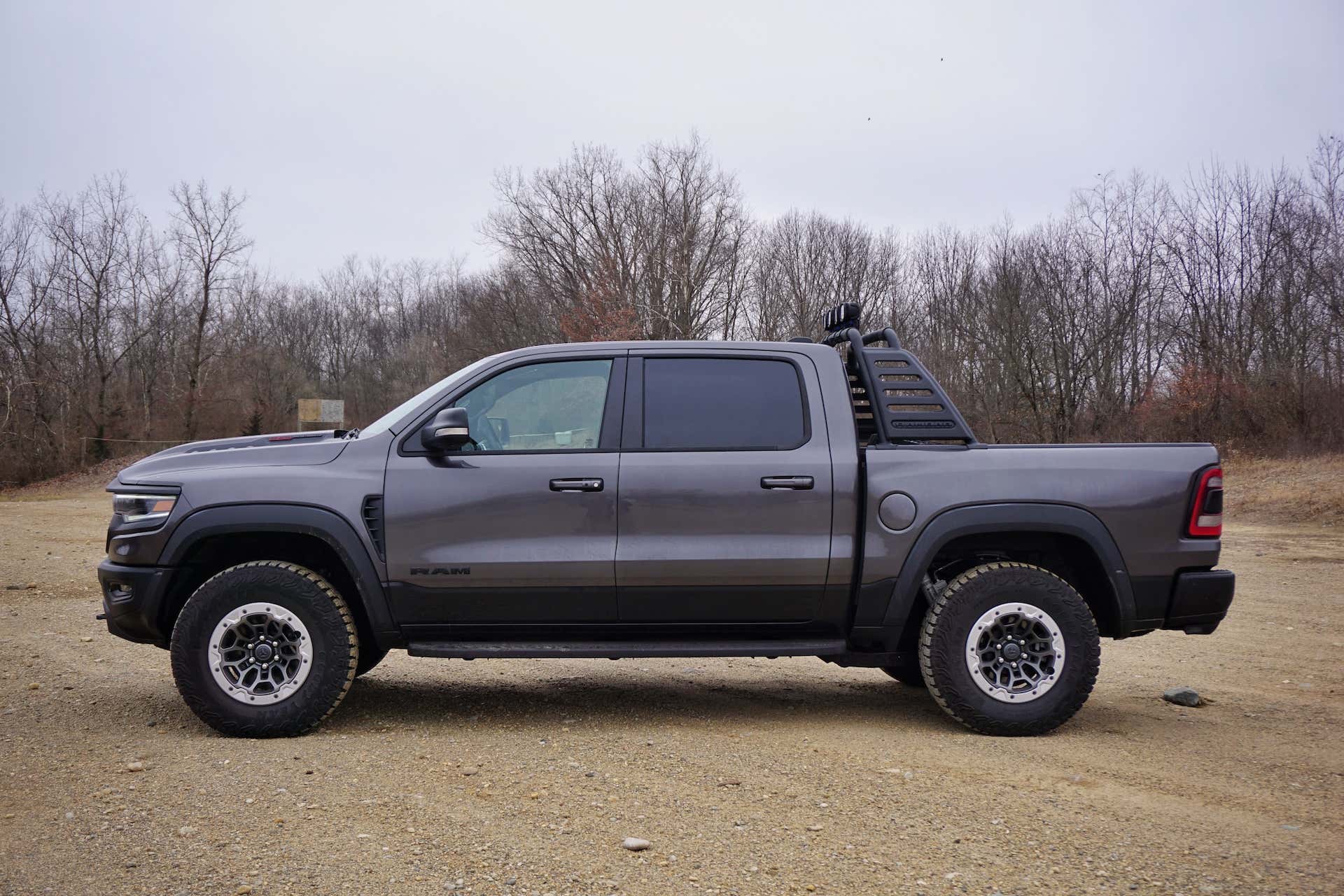 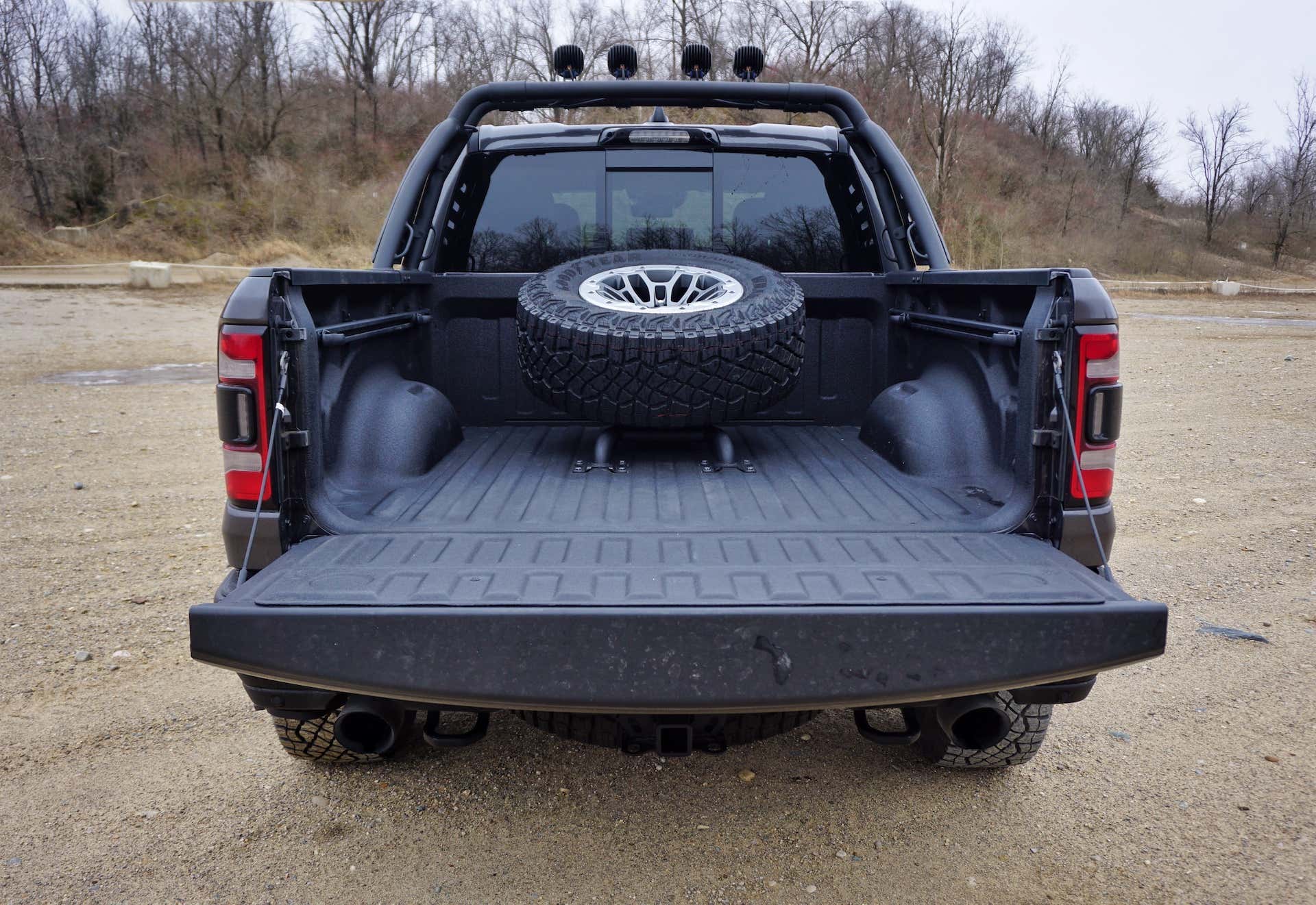 Taking all things into consideration; the city, highway, and off-road driving, I think it’s important to look at the big picture and be fair here. The TRX isn’t a Raptor competitor, and that’s ok. The Raptor was born to be a Baja racer, and the TRX is literally meant to be the Hellcat of trucks. Dirt versus pavement, that’s two completely different environments.

The truck is best enjoyed on the road, whether it’s making commutes nice and cushy or devouring miles with ultimate ease during long-distance driving. It’s most definitely the T-Rex of the road—and the occasional drag race.

There isn’t another vehicle—pickup truck or not—that oozes this much excess and machismo. It’s big, loud, and completely unnecessary, but very cool. It’s almost as practical as a regular truck during daily life—should you skip the bed-mounted spare that renders the bed useless, and not need to tow more than 8,000 pounds—and it’s as comfortable as any luxury truck should be. 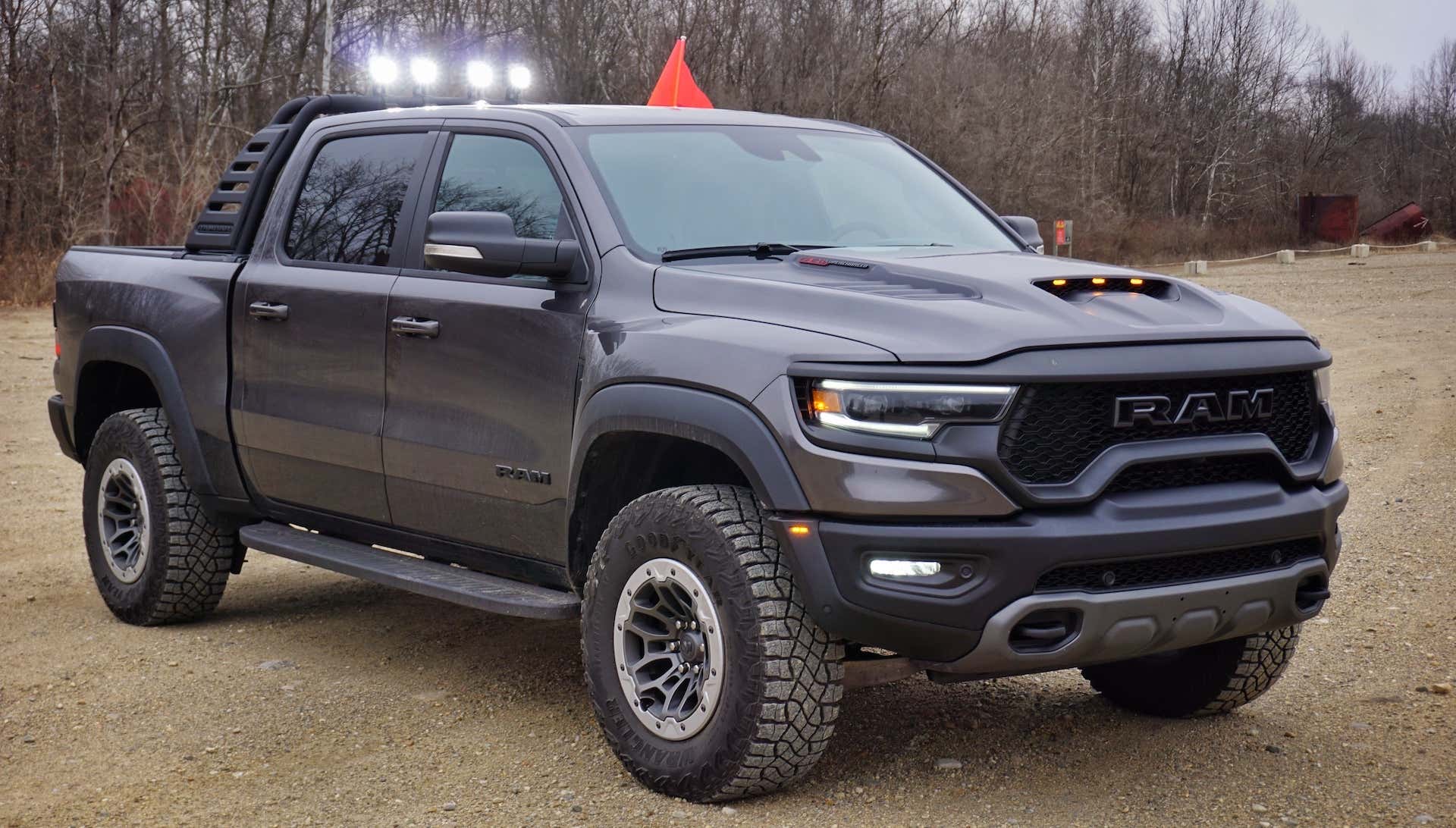 Sure, it can’t keep up with the Ford off-road, but let’s be real; besides this YouTuber, how many TRX owners do you think are going to go bang up their $90,000 trucks on the trail? Yeah, that’s right, just as many—if not fewer—than Raptor owners.

The 2021 Ram 1500 TRX is a toy, a muscle truck for Hellcat enthusiasts, and it doesn’t need our approval nor to be better than the Raptor. The only approval it ever needed was from Fiat Chrysler’s accountants, and bless their hearts for giving that proposal a thumbs-up. Its flawed awesomeness proves that a 702-horsepower V8 in a truck doesn’t solve all of its problems, but it sure is rowdy.

Email the author at [email protected]