2021 MG Astor: Initial Driving Impressions after a day at BIC 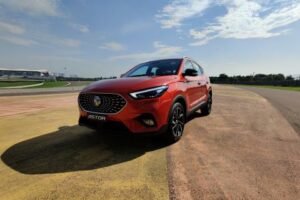 With the MG Astor @ Buddh Stepping inside the MG Astor

The cabin is well-appointed with soft touch materials used in most places and high quality switchgear. The retro switches on the center console (something we saw in the Mercedes A-Class Limousine recently) are a great touch.

The seats are supportive and finding a comfortable driving position is easy. And yes, the “swears-by-all-black-interiors” yours truly loves the Sangria Red bits. It’s just the right shade, one spot either side on the shade card and it’d be gaudy one way and boring the other. Of course, it’s subjective and a matter of personal preference. I spotted the all-black interiors on another fleet car at the venue, and it looks classy too. Would be stumped if asked to pick one.

Best-in-class cabin ambiance? Let’s just say that if the badges were removed (and the signature MG electronic bits weren’t a dead giveaway), nobody would doubt it if you told them it’s a European / German car. It definitely feels comparable to or a notch above the segment competition.

Well-deserved praise aside, there are a few glaring ergonomic blunders, which we pointed out in our feedback to MG directly. The mirror adjustment knob is placed near the driver’s right knee on the lower edge of the dashboard. It’s not in the direct line-of-sight from the driving position and needs some fishing about and fiddling.

Worse – because one will use it far too often to ignore the annoyance – is the placement of the engine start/stop button. It’s to the left of the steering wheel, out of line-of-sight behind not one but two stalks (lights + cruise control). It needs a reach-around and some more fishing and will annoy those of us with larger hands as you’re bound to hit one or both stalks.

Another glaring issue, given in-cabin electronics are a USP of the car, is the lack of a proper ‘Back’ button on both the ICE interface and the steering mounted controls! Neither we, nor the MG staff we pointed it out to, could locate one. If one exists, it’s virtually untraceable and if it doesn’t, what was the designer thinking? Given how detailed and deep some of the settings menus are, it’s annoying to hit ‘Home’ and start over every time you want to go just one level back. We hope it’s fixed at least in the production car’s ICE interface (steering controls may need to wait until a refresh).

The steering could be a size smaller too, and as fellow moderator CrAzY dRiVeR noted, better finished. A rare outlier in a well-appointed cabin.

The AI bot is great & responsive, as long as you speak clearly and simply. It could recognize our commands to open & close the sunroof, as an example, and to start / stop the A/C, but was at sea when asked to ‘ please turn up the A/C’, or if someone said air-conditioner instead. Overall, it’s a great gimmick, but not a must-have. Quite a few people are also justifiably concerned with having an additional always-listening, internet connected device around them.

The large sunroof is great, and makes the cabin feel airy and bright. On the downside, it traps a lot of heat, and can make the A/C struggle in hotter weather. Speaking of the A/C, it’s an efficient unit that cools the cabin quickly and we were comfortable without being chilly under the NCR sun.

Driving the 1.3L Turbo-Petrol AT We drove the MG Astor 1.3L turbo-petrol at the Buddh International Circuit, and here are our brief initial impressions. Please note this is based off just a few laps on the perfect tarmac of the BIC and hence, it is simply a preliminary look. Our real-world test on public roads will show the entire picture.

The Astor is powered by a 1,349cc, 3-cylinder turbo-petrol engine from the GM / SAIC SGE (Small Gasoline Engine) family. It puts out 138 BHP @ 5,600 rpm & 220 Nm @ 3,600 rpm and is mated to an Aisin 6-speed TC automatic transmission. MG has confirmed that it’s the same engine that is offered in the ZST in the Australia – New Zealand market. The outputs have been slightly tweaked to meet Indian emission norms and fuel standards. The motor has a single-scroll Mitsubishi turbocharger in its global specification. The ECU unit is from Bosch and the car sports a 75 Ah Exide battery as standard fitment.

Facing the car, the large airbox is located on the left, with the intake routed all the way to the front grille, ahead of the radiator. This should help the motor breathe better with cooler air coming in. The turbo is mounted on the front of the block, fluid reservoirs (brake + coolant) and air-con low & high pressure line nipples are on the firewall, all easily accessible. The ECU is mounted on the side of the 75 Ah Exide battery, flanked by the fuse box.

Fire up the engine, and it settles into a reasonably refined (for a 3-pot motor) idle at ~900 rpm. The engine note is sporty when revved. Slot the gear shifter into D, release the brake pedal and the Astor crawls forward without any throttle input – a handy feature in peak urban traffic. Give it some gas and the car picks up speed smoothly. Upshifts are barely perceptible in D mode, and the Astor quickly moves up the gears with no jerky shifts. Turbo lag is controlled by the TC AT and the engine feels smooth lower down the rev range as the Astor climbs up to city speeds effortlessly.

Overall, the motor is well-suited to relaxed expressway cruising and sprinting at legal speeds. Not a road burner, but very competent.

Shift into S mode, and the Astor feels eager. Floor the throttle and a throaty growl (rather than a full-blown roar) ensues. We quite like this engine note. In S mode, you’ll see 5,700-5,900 rpm, but there’s no poke left to extract. Under hard acceleration, the gearbox upshifts automatically at the redline even in sport / manual mode.

The gearbox is slightly hesitant to downshift in D when off-throttle, but not annoyingly so. However, in S mode, the AT downshifts nicely to maintain the revs. The well-tuned gearbox masks turbo lag well and complements the motor. It should be reliable too as it is a conventional torque converter and not an electronics-laden dual-clutch unit that can often be problematic. That said, paddle shifters would’ve been welcome.

Cabin insulation is good and NVH is well-controlled. The engine sounds sweet in the mid-range, where it will probably spend a lot of its lifecycle. However, the unit does get boomy beyond 4,000 rpm – a characteristic of most 3-pot motors.

Spacious, well-packaged engine bay with easy to access parts should make for easier maintenance routines. There’s plenty of space for a bigger motor or some add-on hybrid tech in a future lifecycle refresh. Maybe a larger 1.5L turbo in the future, MG? 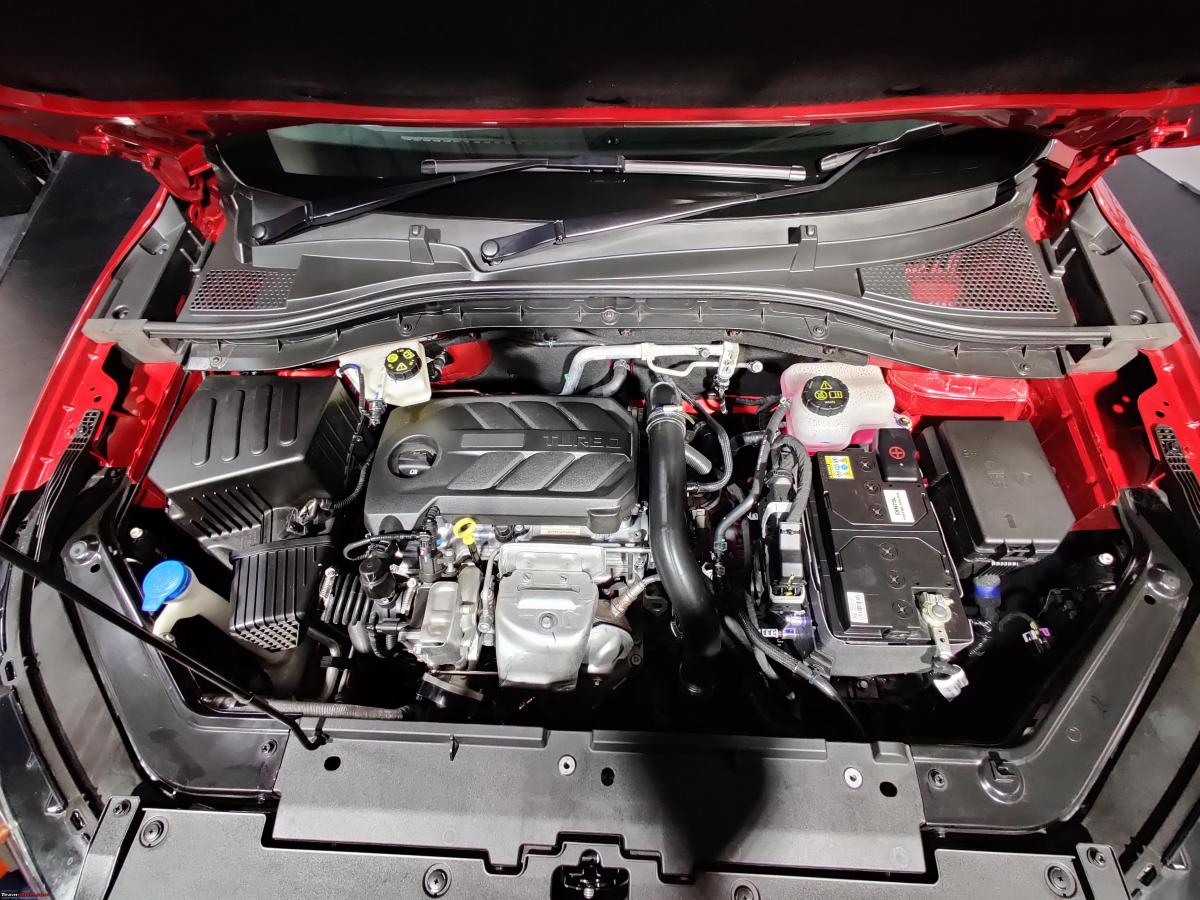 75 Ah Exide battery to power all the gizmos: Aisin supplied 6-speed AT and TCU: Look what we found! Engine top cover is made out of dense foam, not hard molded plastic as is usually the case. Additional noise damping / insulation? We didn’t get to test the car on rough / public roads, but taking kerbs at speed (to replicate uneven roads and those increasingly ubiquitous rumble strips) transfers a rumbling resonance into the cabin without it feeling “thuddy” or crashy like a stiffly-sprung Seltos. Appears to be more compliant than the Kia. Urban sub-par roads shouldn’t bother this car. Wait for our test on public roads.

No, the Astor is not a boat like the Hector & that’s probably why MG held the preview at BIC. The well-tuned suspension setup hits the sweet spot between firm and soft. While body roll is present, it is controlled in hard cornering and quick lane changes, and the car didn’t lose composure even when pushed in sweeping corners. The Astor handled the left-right chicanes in the infield section at BIC confidently at higher double digit speeds. Understeer is predictable and there is no nervousness during quick changes of direction.

Our test car, which was shod with Continental UC6 rubber, fared decently when pushed on the track. The Astor doesn’t feel nervous around the sweeping 270-degree turn 10,11,12 sequence or anywhere else, honestly, unless one’s trying desperately hard.

Hard cornering induced some tyre squeal, but there was always sufficient grip available: The Astor is offered with 3 selectable steering modes – Urban, Normal and Dynamic. These can be changed through the “Vehicle Settings” in the infotainment head-unit.

Urban makes for effortless maneuvering in urban traffic, but offers little to no feedback. The steering is light. Think of it as the “Hyundai” mode.

Normal mode is balanced and would probably be the mode of choice for many. Firmer than Urban, but still light enough for city speeds and all-round city usage.

Dynamic mode is the firmest setting, ideally suited for highway driving. That said, it’s not as weighty as I’d like at higher speeds. The wheel needs a firm hand grip at higher speeds to feel confident around a sweeping curve. The all-round disc setup brings impressive braking performance (especially important with the Hyundai-Kia braking complaints). The brakes bite in a progressive manner and don’t feel grabby at all. In the controlled environment of the BIC, slamming the brakes at 80 km/h brought the car to a stop in a straight line without fuss.

Continue reading the discussion on the 2021 MG Astor on our forum.