2021 Mazda CX-30 Turbo: For The Sport Compact Car Reader Who Has Babies Now 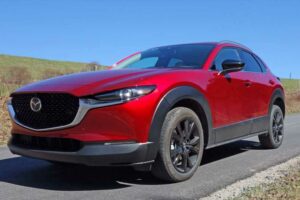 Driving the 2021 Mazda CX-30 2.5 Turbo put me in a nostalgic mood. If you’re of a certain age where you were really into cars in the early 2000s (which makes you an “elder millennial” today, much like me, I’m sorry to say), you may remember the market back then was so full of sporty compact cars that it necessitated an entire monthly magazine devoted to them. It was called, accurately, Sport Compact Car magazine.

For more than 20 years, SCC successfully straddled the tuner scene and the affordable new performance car realm. I read it obsessively in the early aughts when I was in high school and really getting into cars for the first time, and I still remember those huge comparisons tests between stuff like the Dodge Neon SRT-4, the Mazdaspeed Protegé, the first Mitsubishi Lancer Evo, and the Nissan Sentra SE-R V-Spec. With an engineer’s eye for technical detail and a penchant for first-rate storytelling, SCC was unbeatable in the pre-blog/YouTube/Flex for the ‘Gram era of car media. 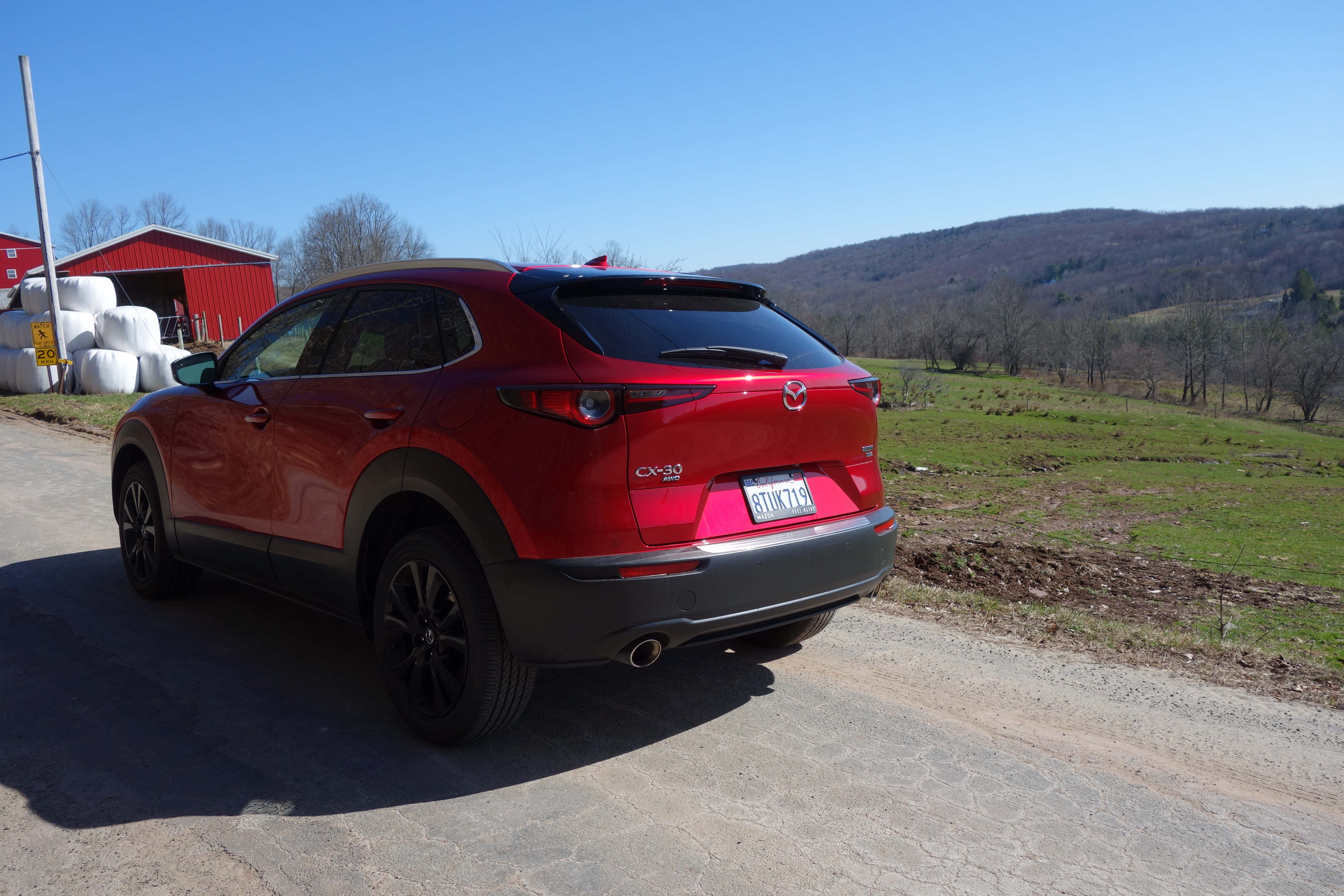 Of course, that magazine is long gone now. As are most of the cars it covered. The sporty, affordable coupe and compact sedan market are both all but dead these days. True, a few heroes like the Subaru WRX, Honda Civic Si and the upcoming and all-new Volkswagen GTI keep the fire burning, and we now have a few higher-end dream cars we didn’t have back then, like the Civic Type R. But for the most part, that world is a thing of the past.

And we’ve all likely moved on as people, too. As much as my generation loves to wallow in nostalgia—if you think the Boomers are bad about that, wait until we get older because it’s going to be deeply insufferable—we have kids and jobs and errands now. Home Depot runs over quarter-mile showdowns. Oil changes at the dealer instead of JDM B16 swaps. 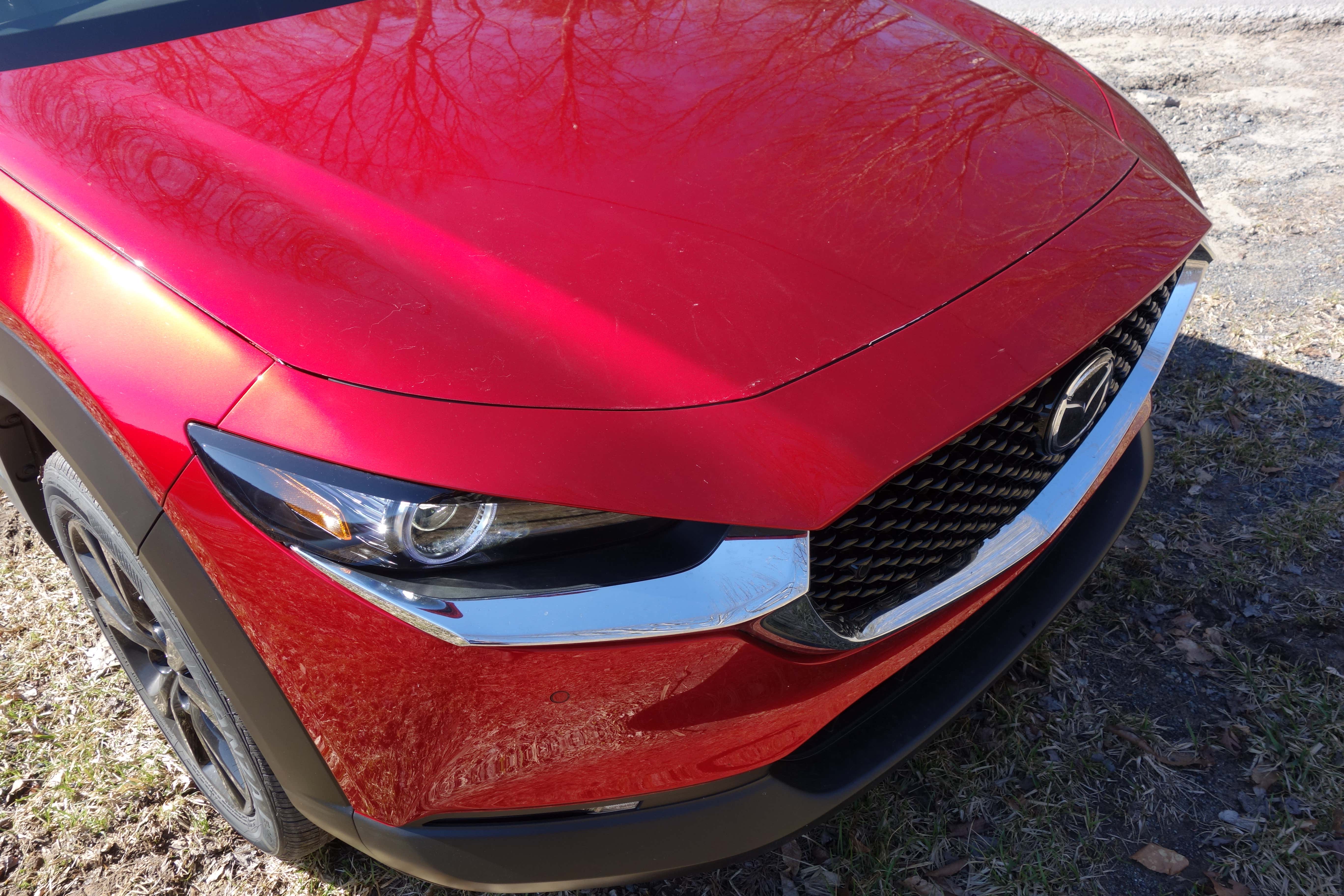 But if that spirit lives on within you—if it’s just been buried under Responsibility and Pragmatism and all the other things growing up brings—and you still want a practical car that’s truly fun and won’t require a Porsche Macan-worthy bank account, consider the Mazda CX-30 Turbo.

It’s no Mazdaspeed3, of course, but it may make everyday life bit more enjoyable. I tested a CX-30 with its fancy, new turbocharged four-cylinder engine recently and came away quite impressed. The last time I drove a small crossover that was this fun, I’m pretty sure it wore AMG badges.

And as someone who used to blow his (very minimal) savings on WRX parts but has since moved on to trying to shore up his retirement plans, I get this car. It’s far more enjoyable than most compact crossovers, which are generally bland, cynical volume-plays where driving dynamics are a distant afterthought if they exist at all. If you were fun, once, and want to still be that person after you take the kids to school, consider a CX-30 Turbo. And unlike the tuner cars of yore, this one comes with plenty of performance out of the box for what it is—no mods necessary. (Unless you want that.)

The nomenclature is a bit confusing, but the CX-30 is really just a Mazda3 with a couple extra inches of ride height and plastic cladding to make it a “crossover.” Otherwise, it has the same chassis, same internals, same engines, same interior, same everything. (It is not to be mixed up with the aging CX-3, which is based on the old Mazda2, and is about to die anyway.) Naturally, because it’s a “crossover,” sales are already well outpacing its hatchback sibling. This is why sporty compacts are close to death, kids. But the CX-30 doesn’t sacrifice much here. We have the new turbo engine to thank for that; rated at 250 horsepower and a very healthy 320 lb-ft of torque, Mazda is finally delivering on its strategy to become more “premium.” People who spend more on nice cars don’t want to roll their eyes and mutter swear words under their breath when they switch to Sport Mode, you see, and that’s long been the case with Mazda’s modern naturally aspirated four-pots. Those motors never put down the power luxury buyers want or what Mazda owners expect for performance. And furthering that idea of moving upscale, the CX-30 Turbo comes exclusively with all-wheel drive.

There are no disappointments with regard to speed here. The CX-30 Turbo is the kind of “normal” car that makes other normal cars feel slow; it’s punchy, torquey, and will get you to extralegal speeds in no time. It does not have the manic qualities of, say, a Mazdaspeed3, but it’s got some real punch and can easily make slower cars on the highway feel like stationary objects. It’s a great partner on a winding backroad, too. 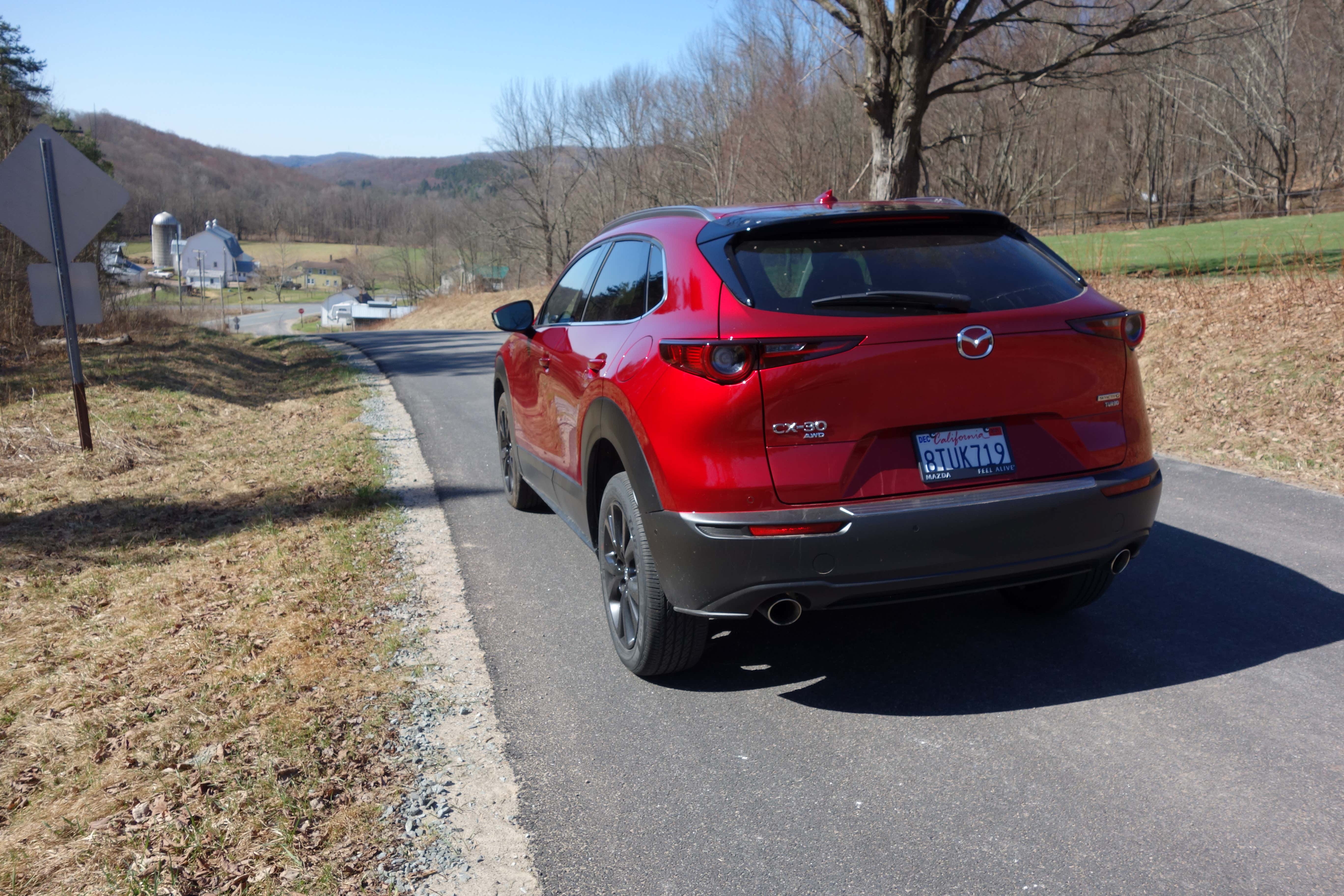 I can’t think of many other crossovers at this price that offer similar thrills. Altogether, the CX-30 Turbo is as legitimately good to drive as any four-cylinder BMW I’ve tested in the last decade. I definitely drove like a BMW asshole in it.

That extends to the handling, too. As good as the engine is here, the handling may be the real star of the show. The steering is tight and direct, the chassis is buttoned-down, body roll is minimal, and it’s still small enough that it can be tossed through corners in a joyous fashion. 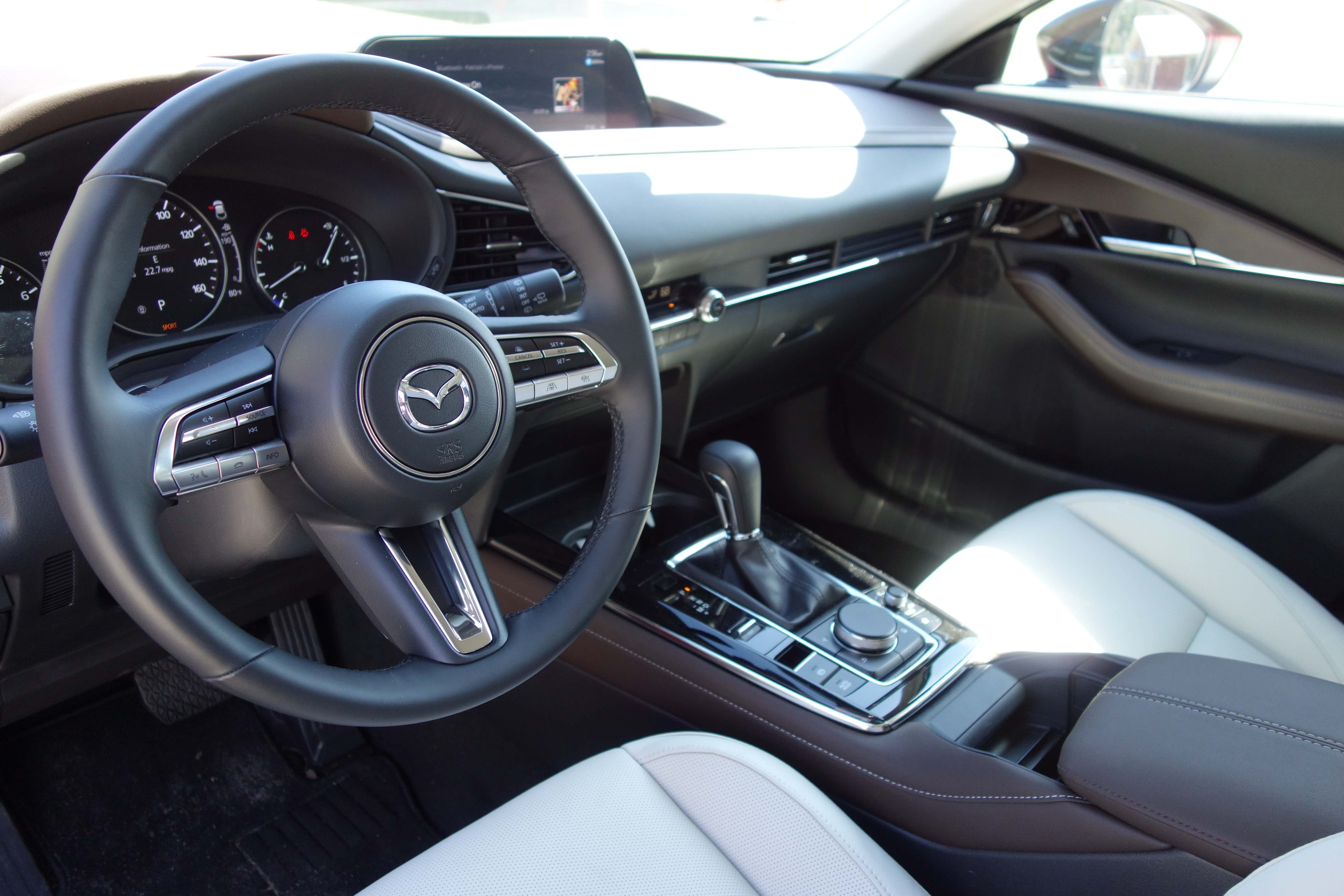 Beyond that, it’s just a handsome machine, inside and out. Especially in the review car’s deep, sparkling Soul Red Crystal Metallic paint—Mazda’s best color right now, bar none—the CX-30 Turbo stands out in a parking lot. The long hood and seemingly low roofline give it an attractive, sporting look. And the interior largely pulls off Mazda’s upmarket push; the design is clean and relatively minimalist, the materials are first-rate and the tech feels driver-centric. I’d describe it as Japanese Audi vibes.

You’ll notice by now I’ve compared the CX-30 Turbo to three much more expensive German brands. That’s no accident on my part.

The thing is, you certainly can’t call the CX-30 an “SUV.” I have a hard time calling it a “crossover,” even. Semantics aside, both terms tend to describe bigger, people-hauling vehicles, and the CX-30 is just a tall hatchback. A Mazda3 on stilts, truly.

Despite slightly different exterior sizes, the interior dimensions of the two are basically identical. (Motor1 has a good rundown here.) That’s not a bad thing, and it helps lend credibility to the CX-30’s hot-ish hatch driving dynamics. But it’s just a tall compact car, nothing more. 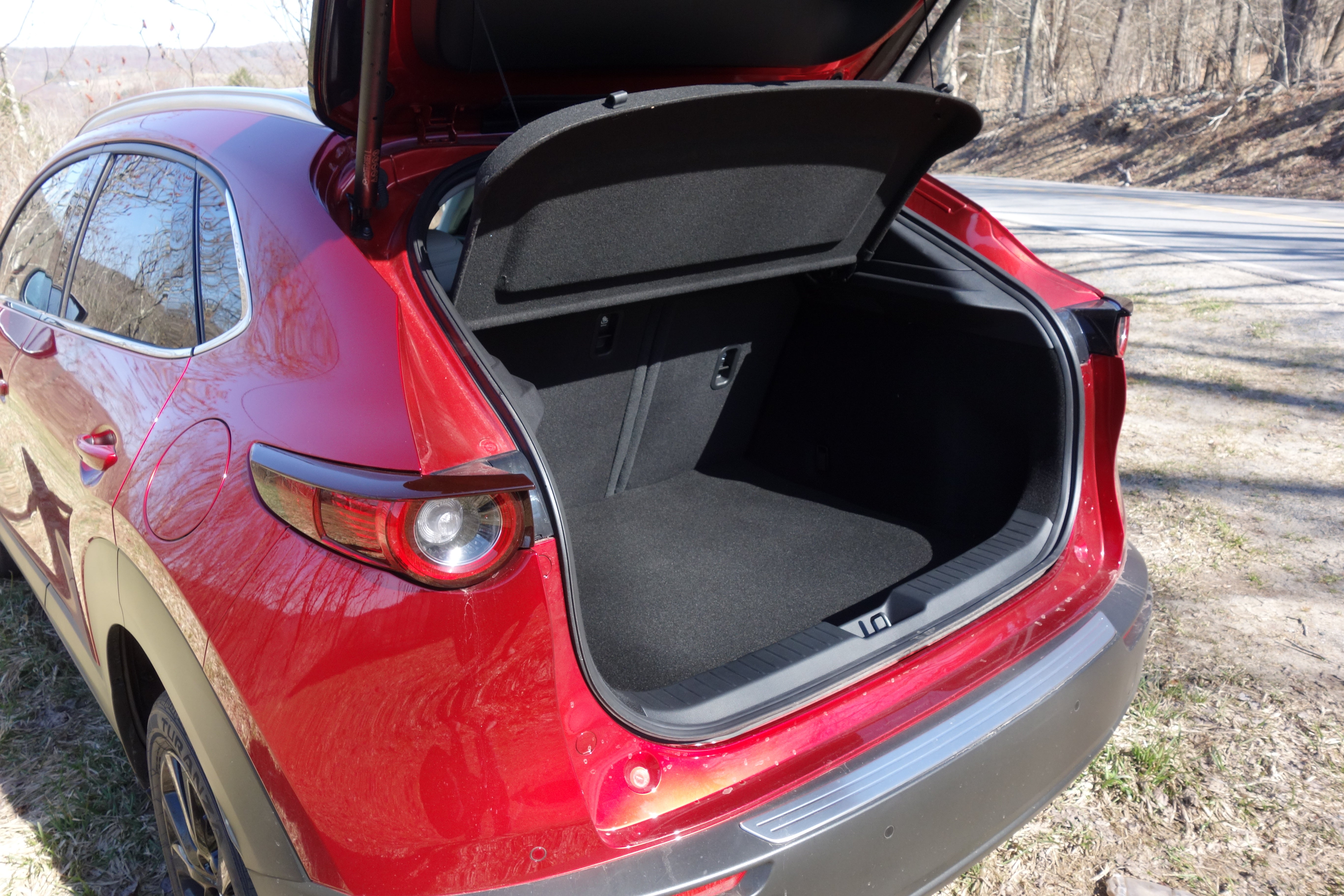 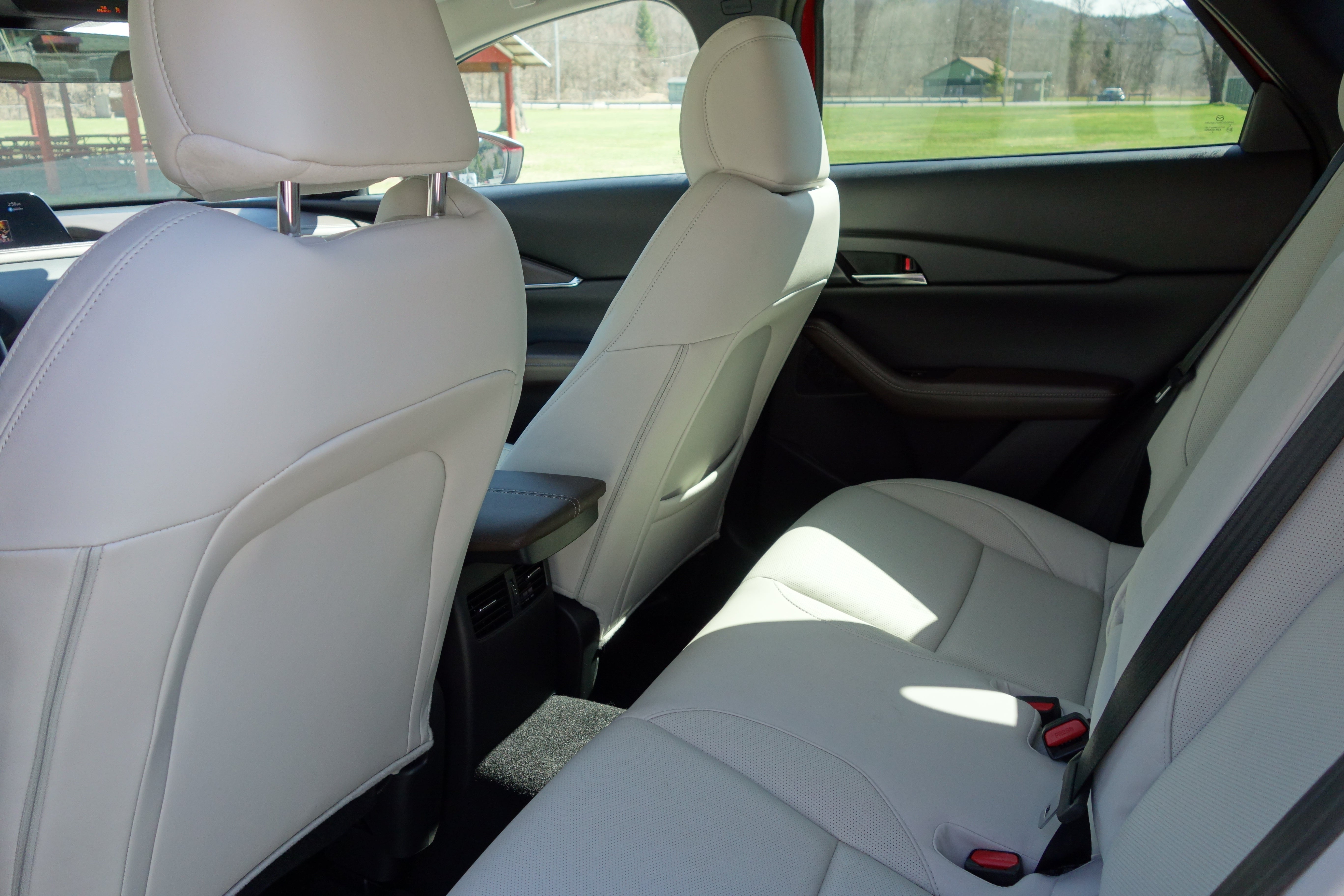 So I stand by my assessment that this is a fun, premium car for the buyer who traded in their Lancer Evo for something more common-sense. But the relatively small rear cargo area and tight rear legroom and headroom make it most ideal for smaller kids—and even those require tons of gear. Just ask any parent. My spouse and I don’t have children, but even we thought we’d spring for a bigger CX-5 Turbo—same engine, and no slouch in the handling department, either—just for more day-to-day utility. The price difference isn’t hugely significant, either. A few thousand dollars more for the bigger, more convincing crossover.

And then there’s that infotainment system, which eschews a touch screen for a rotary click-knob, much like Audi did until recently. So like the Q5 hybrid I just reviewed, the same gripes apply: Entering addresses manually, character by character, is deeply annoying. And it doesn’t mesh well with Apple CarPlay. Mazda says it does this for safety reasons, but I think automakers need to accept smartphones and tablets have made touchscreens the preferred interface for all sorts of consumer devices now, and they shouldn’t try and act like they’re smarter. 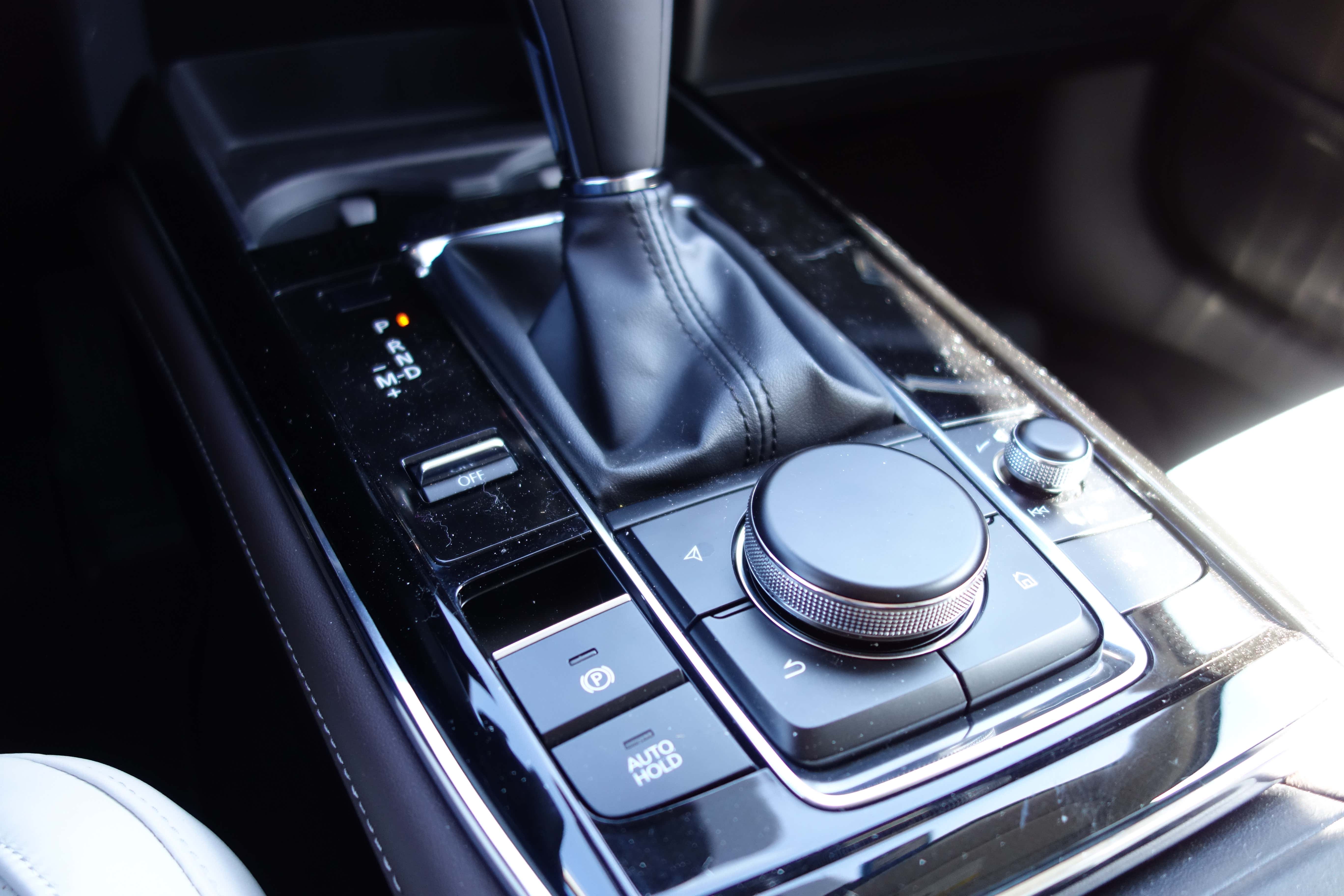 This control system isn’t a dealbreaker for me; I’d still consider a CX-30 (or a CX-5) and I don’t say that about everything I test. But I’d be more dependent on my phone for navigation and other functions, and that’s less than ideal.

Also, my tester’s interior was a mix of white and brown leather with black plastic everywhere. Which was weird? Not bad, I guess, just not the way I’d spec any car myself. 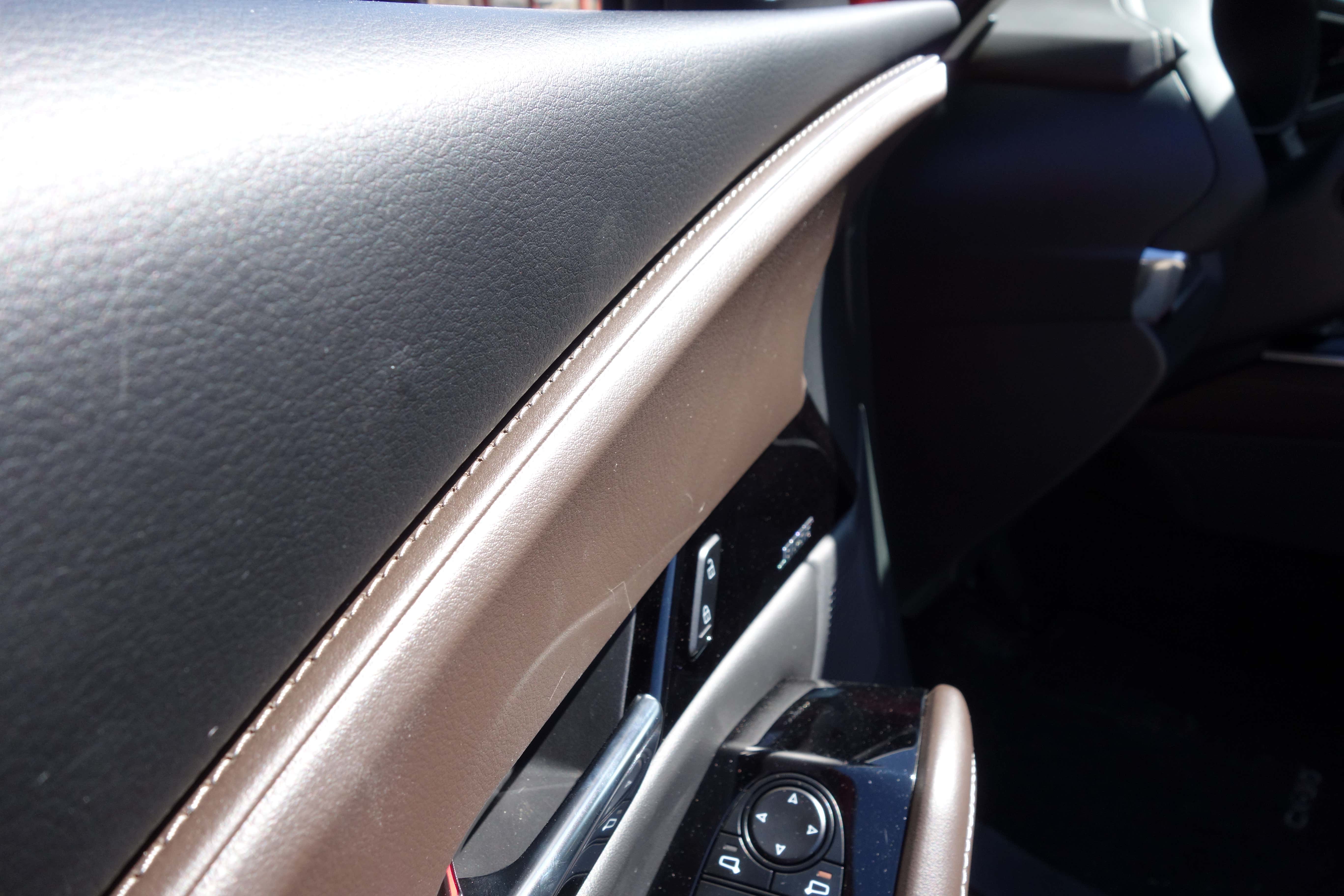 It’s great that Mazda is finally giving us the performance we always wanted to go with its improved tech, classy interiors, and attractive designs. Even loaded like this CX-30 was, it’s a great value—striking, practical, supremely fun to drive. There’s a reason the Mazda3 is beloved by auto critics, but now this crossover version—which, as we’ve established, adds debatable practicality here—is poised for mainstream success, too. 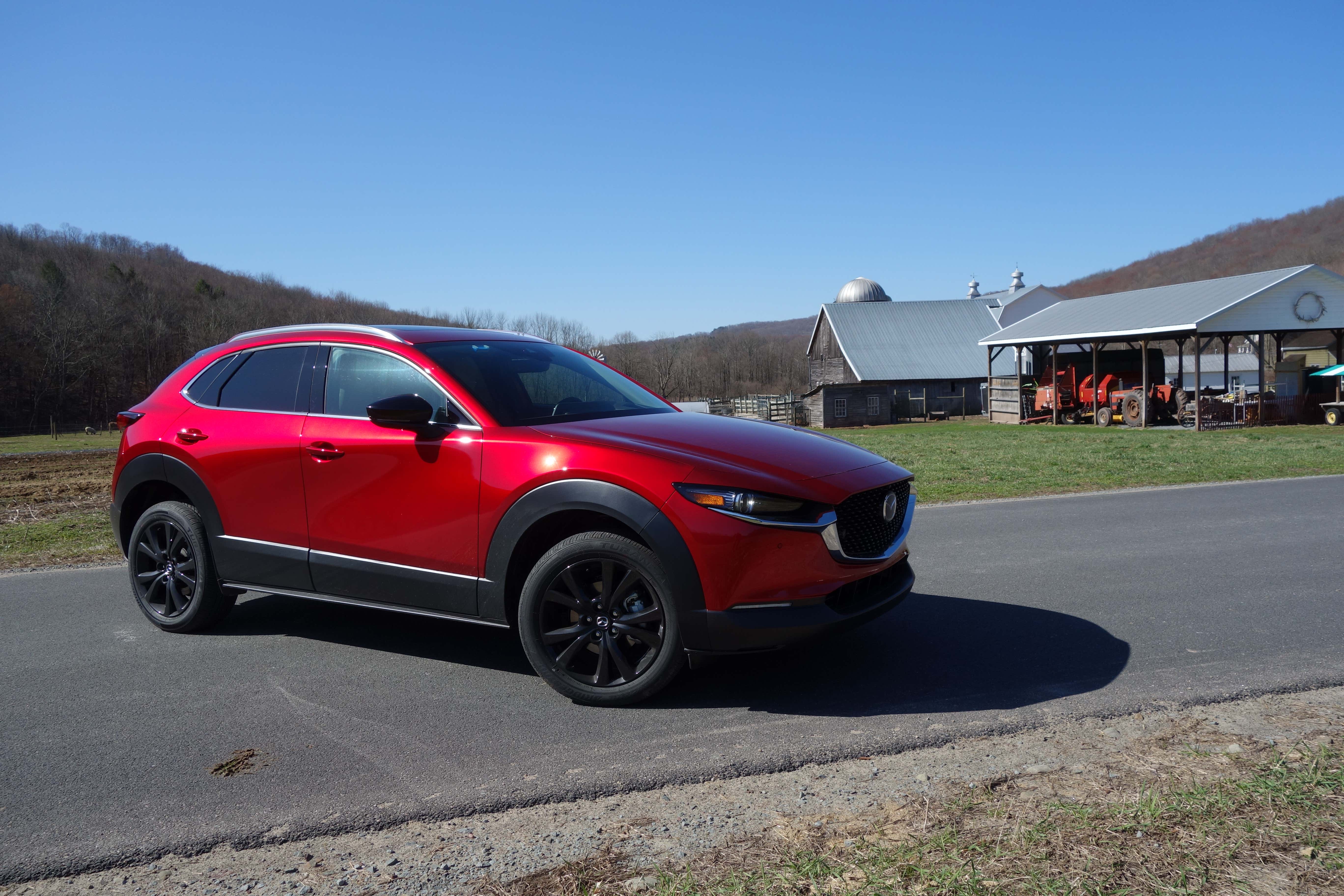 I merely think prospective buyers need to weigh the CX-30 Turbo’s compact dimensions against some of the bigger members of the Mazda family. That turbo four is a superb motor no matter what it’s in. Maybe you won’t quite relive your Race Wars glory days (real or imagined) after you drop the kid at daycare, but in this, you might just come close.