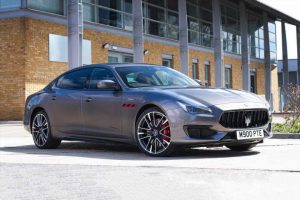 How to refresh an eight-year-old saloon? A 580hp Ferrari-built V8 is a good place to start…

While it’s true that Maserati is doing much to ready itself for the future – see the all-electric GranTurismo and EV variant of its MC20 supercar for evidence – it clearly isn’t done with the old ways just yet. Step forward the new Quattroporte Trofeo, a Ferrari-powered rear-wheel drive super saloon based on a car first launched in 2013. And which, really, nobody loved back then. With no hybrid technology whatsoever it’s an unashamedly old school proposition, although with a 580hp twin-turbo V8 and 202mph top speed – 12mph more than the F90 M5 – this Trofeo isn’t short of performance.

As ever, Maserati is targeting a different clientele to the more obvious, almost exclusively German, choices. You can see it in the Quattroporte Trofeo’s styling, which is restrained to say the least, with only red trim on the wing air vents and big calipers offered as a visual hint. That is, until the starter button is pressed, and that subtlety is replaced by muscle and menace. There is absolutely no mistaking the arrangement of cylinders in a Maserati Trofeo. Not from the outside, anyway.

On the inside, where there are soft leathers, Alcantara and carbon trim, it’s a much more sedate affair. It’s quiet, too, with the bass of the 3.8-litre engine purring up ahead felt in vibration alone, allowing you to appreciate what remains a pretty decent interior. It’s a far cry from the all-digital surroundings we’re now accustomed to, but that’s not necessarily a bad thing. Around the 10.1-inch touchscreen infotainment system, complete with 2021 essentials like wireless Apple CarPlay, are actual buttons for the climate, drive mode and volume controls. There are analogue dials for rev counter and speedo, too, split by a small colour display between.

Even the steering wheel only bears a small smattering of visible buttons to control the adaptive cruise and instrument cluster display. More prominent are the pair of frosted aluminium extended shift paddles, which are mounted to the steering column immediately behind the fairly large diameter, but thin-rimmed wheel. Quite clearly, however, it’s the engine that makes the most prominent first impression; not least because the footwell is narrowed by a wide transmission tunnel found only in the V8 models.

That means the pedals of the Trofeo are slightly offset, with the throttle close to the right side (in this UK spec car), forcing you to angle your legs accordingly. Not ideal, especially in a world where rivals are ergonomically spot on – although you do soon get used to it. The same is true for the seating position, which is higher at its lowest setting than the class norm for super saloons by a good couple of centimetres, but actually very comfortable when you’re settled thanks largely to the chair’s supportive shape. It’s not overly bolstered or torso-pinching, either, which may please wider drivers – or those who prefer a little more wriggle room on longer drives. And you needn’t worry about those in the back; this is a five-seater with limo-like legroom. The QP is 297mm longer than an M5, after all.

There are some key selling points in there already, then, although what really matters in the Trofeo is the presence of an engine hand-built by Ferrari. It only takes a tickle of throttle to know that the character is different to the V8s of BMW’s M5 and Porsche’s Panamera. It swells with performance rather than explodes out of the box, with progressive thrust that leaves it feeling acceptable but not particularly inspiring below 3,000rpm. We’re accustomed now to engines that egg you on from low revs – this isn’t one of them. It gives the impression of being less urgent than some others; that is, until you lower the window.

From the inside, the 3.8 never sounds as loud as you’d expect. It seems as much to do with factory-fit sound-deadening as it does any particulate filtering, and probably Maserati’s commendable decision to not synthesise the engine through the speakers. That said, click from the normal ‘I.C.E’ setting into sport mode, and the opening of valves means the bass turns to a bellow and you’re encouraged to work the engine. The steering slightly weights up and the damping tenses, too, although you can click the latter back to the softer setting, where the ride is supple and borderline wafty. In sport, the damping retains a long enough stroke to deal with big bumps, but there’s a price to pay over smaller imperfections and drain covers.

It’s absolutely worth nudging the gear selector to manual and taking control of the QP Trofeo’s eight-speed yourself, partly because the gearbox is ultra-quick up and down the ratios, but also because of the paddles. The action is light but satisfying, with a proper click, meaning you engage with it physically. Taking control also prevents the ‘box from automatically downshifting with every half squeeze of the right pedal, allowing you to savour the gradual growth in acceleration to the motor’s 6,750rpm peak. Maximum torque is there from 2,250-5,250rpm, but you’re rewarded in keeping the needle at the upper end of the counter because that’s where things get thrilling. Plus, to achieve that 202mph top speed, the ratios are quite long.

Corsa mode automatically dials back the electronic safety net that’s been keeping things in check, and you can turn the ESP off fully. Do this, and the central display turns orange, to remind you that all 580 horses are rear-bound without restraint. Up to a point, the mechanical grip provided by Continental Sport Contact rubber feels largely unbreakable, but it becomes clear the QP Trofeo can be an absolute hooligan if so desired.

That said, it never feels entirely interested in being a hunkered down performance machine like some of its rivals. The Maserati tilts in corners and asks for two strokes of the damper before it settles in quick direction changes, and the relative lack of bolstering in the seats means the lean is exacerbated. It’ll go along a road hugely quickly, no doubt, but you’re never fully immersed in the experience, with precious little communication via steering or chassis. Instead, you revel in the predictability of the V8’s power and the satisfaction of the gearshift, playing with the throttle adjustability because the option is there. The QP Trofeo wouldn’t know which way a Panamera Turbo or even rear-drive F90 M5 went – but you will likely not care.

It might be new, but the Quattroporte Trofeo was always destined to seem old fashioned. Not only is the platform eight years-old, but the deal with Ferrari is also set to expire next year, with a new Maserati-built V6 on the way. That means the Trofeo’s lifespan will probably be short, the final hurrah of a closing V8 chapter. Of course, that doesn’t mean this 580hp model won’t make an impact while it’s around, because there are genuine thrills to be had here. What lingers most fondly in the memory, though, is a big bruiser personality and old school charm it exudes from every pore. In an ever more digitalised automotive world on the brink of full electrification, it’s a likeable throwback.